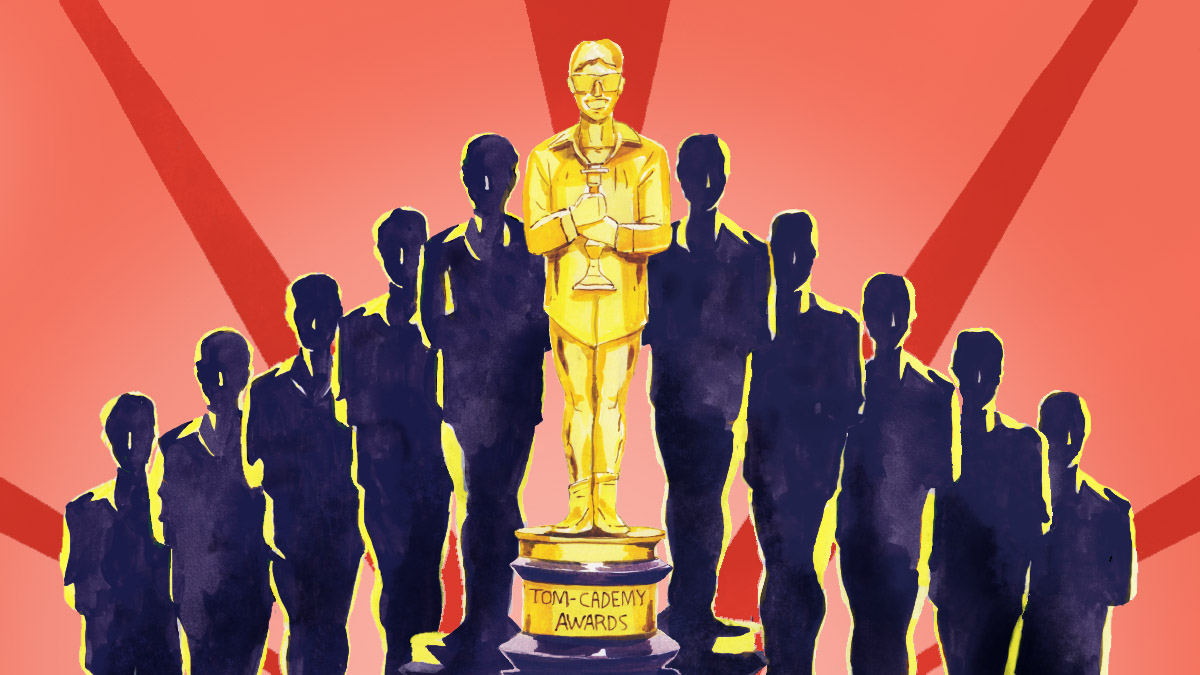 Tom Cruise Week is, by design, about one man and one man only. But so many more actors, directors, writers, and craftspeople contributed to the Cruise films we all love. We wanted to honor their work, so we created the first (and last) Tom-cademy Awards. A highly qualified, mysterious panel of judges picked five nominees for a variety of prestigious categories. Then, our staff voted — sometimes with their brains, and occasionally with their hearts — on who would take home our mythical, nonexistent trophies. There were upsets, snubs, hurt feelings, and there was entirely too much Limp Bizkit. But then again, isn’t that true of all awards shows?

Shea Serrano: Top Gun won Best Picture because it’s the most iconic movie of Tom Cruise’s career. You don’t even really have to talk about it; you can just spout out short phrases and people will know what you’re talking about. That’s generally a good way to tell if something is iconic.

If you want someone to know you’re talking about A Few Good Men, for example, then you do the “You can’t handle the truth” line. If you want Jerry Maguire, you go with “Show me the money” or “You had me at hello.” If you’re a Jack Reacher nerd, then you have the “Remember, you wanted this” part from right before the five-on-one fight. On and on like that.

With Top Gun, though — with Top Gun there are SO MANY things you can say and it’s like, “Oh, that’s Top Gun.” You can get away with single words (Maverick, Goose, Iceman), two-word phrases (Goose dies; shirtless volleyball), even song titles from the soundtrack (“Danger Zone,” “You’ve Lost That Lovin’ Feeling,” “Take My Breath Away”). It’s remarkable, really.

And if you want to be cerebral about fictitious awards and argue that the Best Picture pick should go to a movie from Cruise’s catalogue that’s historically very important and has had the biggest impact on the film industry, then that’s Top Gun, too, because there is an argument to be made that Top Gun not only operates perfectly as the encapsulation of 1980s cinema, but that it’s also the archetype for the big, big summer blockbuster movies that dominate the multiplexes now.

Jason Concepcion: Magnolia is not my favorite PTA movie but Cruise’s proto pickup artist Frank “T.J.” Mackey is my all-time favorite character in a PTA movie. Anderson wrote the role expressly for Cruise, then had the good sense to trust the actor’s intuitions about where to take the character. Last Summer, Grantland ran an excerpt from Amy Nicholson’s Tom Cruise: Anatomy of an Actor which says everything that needs to be said about the role of Mackey and the details behind his creation. If you haven’t read it, do so then come back.

OK. Now, my very favorite thing about the character of Frank “T.J.” Mackey is that he was obviously the inspiration behind Nike’s “Kobe System” commercial for its Kobe VII line of shoes. It is pure Mackey; from the way Bryant appears, shot from a low camera angle, rising from beneath the stage throwing an illuminati sign, to his grandiose proclamations to take his adherents over the top.

Toward the end of his talk, Mackey overturns a table and tells his audience “to go 23 in your white books. ‘How to fake like you are a nice and caring person.’” How do you take that over the top? With a dude who wears no. 24.

The only question is whether Kobe is in on the joke or not.

But I guess it doesn’t matter. It’s enough that someone at Wieden+Kennedy decided that the best cinematic allegory for Kobe Bryant was a self-hating über-asshole with father issues and that Kobe agreed. That alone takes Paul Thomas Anderson to the top of this category.

Shea Serrano: This feels like a bit of a cheat because Paul Newman actually won a real-life Oscar for his “Fast” Eddie Felson role in The Color of Money, but that’s just how good he was in it: he was so good that even when we hand out fake awards he still has to get one.

I can’t think of many things as perfect as the way Newman played Felson. He was smart and he was slick and he was talented and he was proud, but he was also occasionally dumb and uncoordinated and overmatched and impish. The way he moved around the table, the way he only seemed to speak in profound statements, the way his frustration with Vincent rolled off his forehead like very big dew drops off very big leaves, the way his disappointment with himself after not realizing Vincent let him win in their tournament pounded him into the earth. The part when he gets hustled by Amos and gets his heart broken was just so feverishly good and authentic that it felt almost good to watch him go through it, even though it was most assuredly terrible watching him go through it.

There’s a part that happens toward the end of the movie, right when the big pool tournament starts. Eddie beats a guy, this real doofy fellow.1 And after he does, the guy walks over to him, passively shakes Eddie’s hand, and then, in this very self-pitying voice, says, “I didn’t deserve that.” Eddie, incredulous, pauses for a second, measures him, measures the situation, measures the universe, then — and this is the most perfect fucking thing he could’ve said — he says: “Yes …” and he lets it sit there for half a beat, then follows it with, “… you did,” and walks away. It was gorgeous. Newman managed to squeeze a whole undressing in those three words, and it wasn’t just a verbal undressing, it was a goddamn existential one.

Jason Concepcion: I didn’t think Emily Blunt had this in her. I did not think she could pull off the badass action-movie-soldier-who’s-seen-things role, creating in Rita Vrataski a character who is unquestionably competent and full-metal tough, but not in a way where it seemed as if the role was originally written for a dude. Which is really on me, since Sara, her character in Looper, 2 appears to point the way.

The wonderful thing about EoT 3 is that it’s really funny. It achieves that by not pretending the audience has never seen a time-travel movie. Instead, Edge of Tomorrow claps the audience firmly on the shoulder and, smiling, asks (rhetorically), “Hey, wanna see Tom Cruise get iced?” And, as it turns out, watching The Character Named Tom Cruise getting killed in fun and interesting ways, ways that show just enough exposed cranium to make the exercise mean something, is pretty invigorating.

But! Do we not, paradoxically, also want to see The Character Named Tom Cruise succeed? To save the world and get the girl? Yeah, of course we do. This is Tom Cruise we’re talking about. And it’s Blunt, playing it straight the whole time while kicking a Ripley-in-Aliens level of xenomorph butt, who has to downshift from hero-on-a-recruiting-poster to woman-who-we-kind-of-want-to-see-kiss-Tom-Cruise in order to make Cage’s journey from charming coward to soldier/love interest believable. He’s the hero we deserve, that we also need to see die.

Mike Philbrick: Congratulations to Aaron Sorkin for taking home best Tom Cruise screenplay for A Few Good Men. I’m sure this will bump that trophy he got for The Social Network down a shelf or two. This is justice for Sorkin, who wasn’t even nominated for an Academy Award for this. He did manage a Golden Globe nom, but lost to Scent of a Woman which, if I recall, is a movie about Al Pacino making fun of people who do Al Pacino impersonations.

The characters Sorkin created definitely let us witness the firepower of this fully armed and operational battle station, and by that I mean Jack Nicholson acting the way I assume he acts every damned day, Tom Cruise acting passive-aggressively entitled but moments away from insanity (which is also the way I assume he acts every damned day) and Ren McCormack in a flattop. Demi Moore could have been given more lines that we would hear from C.J. Cregg and fewer lines we would hear from the likes of Zoey Bartlet, but it’s still a movie you would watch in an instant if you came across it on TNT or something.

That surreal quality was achieved partly by Kubrick’s costly, time-consuming decision to rebuild sections of Manhattan rather than film on location and Smith’s gauzy, misty-eyed natural lighting. Smith’s camera seems to glide sensually across the squishy ridges of your brain at times, but also linger uncomfortably on the most unpleasant, striking tableaus in the story. The intense use of color recalls the absurdist work of Terry Gilliam.  This is a movie to get lost in and, more than any other motion picture in the Tom Cruise canon, benefits from its visual palette.

Jason Concepcion: Imagine a world in which people are constantly bombarded by personalized virtual advertising, where users interface with their computers using physical gestures, where a person’s daily movements and Internet searches are captured by mostly invisible methods and stored on faraway computers for use in said personalized advertising. Or, worst case, as evidence against them in court. Right. Now, imagine psychic powers exist and Tom Cruise is a cop.

Steven Spielberg’s Minority Report began production in March 2001 and hit the theaters in the summer of 2002. Those were halcyon days, when the movies tastefully refrained from invoking 9/11 imagery. Mostly because the attacks had literally just happened. I mean, yeah, The Sum of All Fears nuked the Super Bowl that summer. But at least that was a movie (albeit a bad one) about terrorism, not an excuse to show off how Superman’s heat-vision can melt steel beams. Ironically, you could argue that it was Spielberg, with his 2005 remake of War of the Worlds, who made it OK to emphatically blow up urban landscapes again.

In the place of epic destruction, Industrial Light & Magic populated Minority Report with practical, lived-in effects, depicting a recognizable year 2054 in which the individual is enmeshed in a web of technology. And just in case you didn’t get the metaphor, Spielberg was like, “Boom. Spider Robots.” Minority Report is like Blade Runner4 but with the lights on, a high-tech shopping mall inside a glass prison. Looking back, the movie was eerily prescient.

Winner: Interview with the Vampire

Dave Schilling: This was sneakily a very hard category for me to vote on. Legend has crazy fantasy attire, The Last Samurai has period fare plus samurai gear, Minority Report is futuristic yet believable, and Days of Thunder somehow made NASCAR driver uniforms semi-fashionable. Those all sound great and wonderful, but if there’s a movie with vampires in it and it’s not called Twilight, it probably has completely ludicrous costumes that deserve awards. Bram Stoker’s Dracula won a real Oscar for Best Costume Design in 1993 and rightfully so. But Interview, while able to garner two Oscar nods in 19956 was denied a Costume Design nomination. So, I think this is most definitely a fair consolation prize. You’re very welcome, costume designer Sandy Powell. Feel free to come pick up your trophy any time. We’d ship it, but our Stamps.com postage machine is broken.

Legend
Interview with the Vampire
Minority Report
Far and Away

'The Andy Greenwald Podcast': Albert Hammond Jr. on the Strokes and His New Solo Album