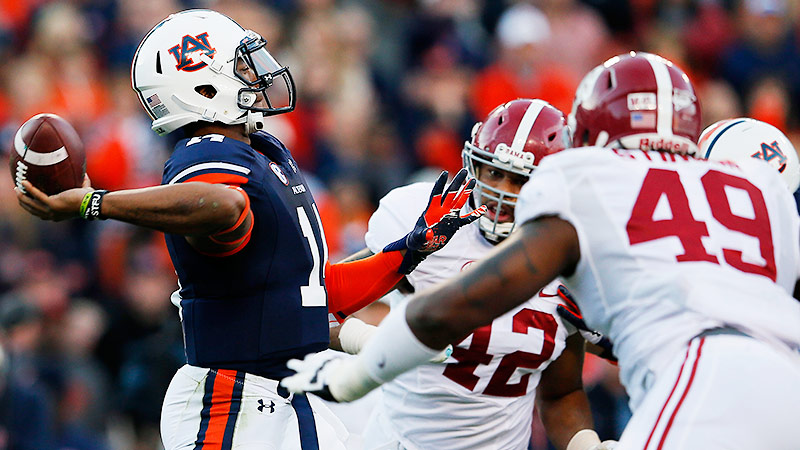 Join us as we take a tourist’s glance at the nebulous between-world of spring football, so often neither footbally nor springy. Last week: the ACC. This week: God’s own football conference, which is somehow still breathing after seeing its streak of seven consecutive national titles snapped.

Who All Is in the SEC This Year?

As fond as we all were of Good-bye Vanilla Pudding Mornings, Vin Diesel Nights, there’s no need for mnemonics this week. The SEC’s entire cast of programs returns, with newest additions Missouri and Texas A&M presumably no longer regarded as interlopers after laying two Cotton Bowl victories, a Heisman Trophy, and a division title at the conference altar over the past two seasons.

Auburn: Once Again, From the Top

We’ve seen this story before, and it hasn’t even been that long: Newish Auburn football coach polishes up another SEC school’s dual-threat castoff quarterback, then takes team on rollicking and improbable ride to national title game. Gus Malzahn’s Tigers didn’t quite match the lofty heights of Gene Chizik’s championship squad, but this administration feels like it has more than enough staying power to prove that 2013 wasn’t just a well-timed blip. Malzahn, a vital architect on Chizik’s title-winning team, is sticking around this time, along with his entire staff. So is his quarterback, the yard-devouring Nick Marshall, along with most of the offensive line (though where those linemen end up playing is still a matter of speculation). Ricardo Louis is back, if you’re into talismans.

Mostly, though, we’re a superstitious lot, and after watching the final quarters of Auburn-Georgia and Auburn-Alabama last year, we’re petrified of picking against the Tigers in the regular season until the numbers say we have to, lest we be struck by lightning out of a clear blue sky. Until then, names to watch this spring: on offense, running back Peyton Barber in the race to succeed Tre Mason; on defense, Carl Lawson’s attempts to fill the Dee Ford–shaped void at defensive end.

“And like a lot of dreams, there’s a monster at the end of it.” 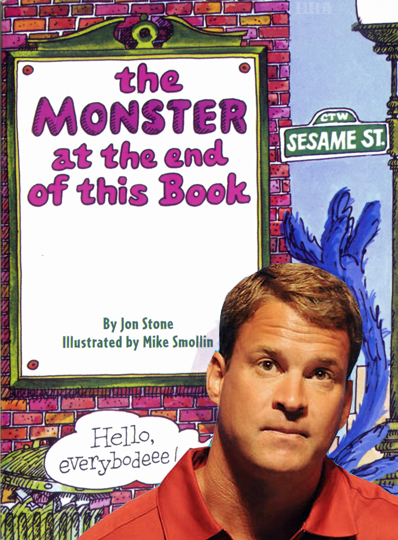 If you have any idea what kind of Rust-and-Marty repartee Nick Saban and Lane Kiffin enjoy when the cameras and recorders are off, please don’t ever tell us. It will never, ever measure up to their unshot and unseen True Detective season that we have running in the theater of our minds.

To business: Kiffin will have about a half-dozen quarterbacks to sift through this offseason, but we’re not paying any significant attention to this race until Florida State transfer Jake Coker, who arrives this summer, gets to be one of those guys. (Who would you rather have to replace, anyway, a C.J. Mosley or an AJ McCarron?) Where we are currently captivated: tracking the development of tight end O.J. Howard and running back Derrick Henry after promising 2013 debut campaigns.

At the other end of the SEC spectrum: The Wildcats reeled in a big-name hire in Mark Stoops to replace Joker Phillips last offseason, made headlines with a stellar 2013 spring game turnout … and then proceeded to extend a lengthy losing streak in conference play en route to a 2-10 campaign. Stoops responded by inking a top-20 recruiting class this February, which is no mean feat considering the Cats have a small pool of local talent, a geographical footprint far removed from the rest of the conference’s most fertile recruiting grounds, and have to play in the SEC. We spoke with Coach Stoops about mining north of the conference for football talent; areas of need; and how the former defensive backs coach is working to rebuild a unit that managed only three interceptions in 2013.

When you’re recruiting a guy to come play for a rebuilding team, how do you balance the sell of immediate playing time versus the reality of just how hard it’s going to be to get competitive?

Well, I just think it was obvious that we needed some help. We needed players to come in and have an immediate impact, and I think that helped on the recruiting trail. And last season, our kids that we were recruiting, they understood what we were in for.

Your recruiting footprint is something of a conference outlier, but given your personal Ohio connections, it also seems like a situation that’s ideal in its own way.

The proximity is a big part of it; we can get to an awfully big part of Ohio very quickly, if you just look at southern Ohio from Columbus on down through Cincinnati. And then with my ties to northern Ohio, it just makes sense to recruit the whole state that hard.

It’s an interesting time to be alive in the SEC East. Where do you see Kentucky fitting in as Tennessee also rebuilds, Vandy adjusts to a new coach, and Florida doesn’t look as scary as we’re used to?

It’s very hard for me to look that far ahead. That’s not coachspeak; we just have so much work to do. We have to improve drastically. I said that a year ago, and it’s the same this year. To be competitive in the SEC East and in the SEC overall, we need to improve in all areas. We were very inconsistent last year and, y’know, through this spring? We have to find a quarterback.

If that guy turns out to be [early enrollee] Drew Barker?

I’d have no hesitation in playing him. If he earns the job, then he’ll be out there come opening day.

He’s a true freshman, in here at mid-term. From everything we’ve seen so far through the recruiting process, and through his time here this winter, we like what we see. I see a guy who has leadership qualities, but he’s not trying to come in here and just be that vocal force right away. He understands that he has to earn the respect and trust from his team, and he’s working extremely hard to do that.

I haven’t been on the field with him yet for a practice, but I just want him to be comfortable. Making the decision to go with a freshman, [he] obviously [has] to have command of that offense, and that’s yet to be seen. So we’ll see how that goes.

Who should we be watching to contribute early at defensive back, after last year’s interception drought? And is the plan for creating turnovers next year more focused on changes in personnel or a change in strategy?

[Last year] we were not around the ball enough. We tried many different things. We tried pressuring, we tried 3-4, we tried 4-3, you know, the things we’ve done forever. We just need some playmakers, and to make more plays when we have opportunities. We added a juco player, A.J. Stamps, who we’re looking forward to getting out there.

Who’s your sleeper pick for Kentucky this fall?

I think it could be one of two guys. On the offensive side of the ball it could be Dorian Baker, who’s just an awfully big, strong receiver from Cleveland. Defensively, the sleeper might be [defensive end] Lloyd Tubman. He’s gonna be a fantastic football player.

• Johnny Fucking Football-Manziel, Esq., has moved on to the NFL draft. You might have heard. He will need replacing, apparently. 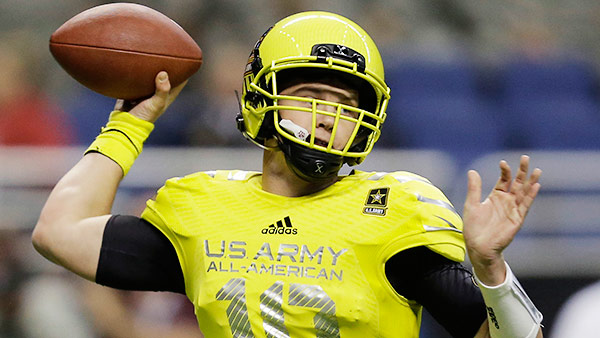 • Even with Mike Evans’s astronomical talents missing from the 2014 squad, is there a position group in the conference that’s as promising as the Aggies’ returning and incoming receivers? Whoever steps in at quarterback is going to have an embarrassment of riches at his disposal with Malcome Kennedy, Ricky Seals-Jones, and Speedy Noil as targets.

• Defense, maybe try stopping the other team from scoring? Or don’t. How much fun would the Alabama game or the Chick-fil-A Bowl have been had anybody been able to tackle anybody else?

Georgia: Whatever Doesn’t Kill You …

Georgia just bade farewell to the SEC’s all-time leading QB in both yards and touchdowns, is breaking in a new defensive scheme, and just had four players collared for trying to double-dip on their stipend checks, but the prevailing wisdom is that fortunes have to tick upward in 2014, if only because they can’t get much worse. This mind-set may come off a touch melodramatic — just ask the Florida Gators if they’d take an 8-5 record and a New Year’s Day bowl bid right about now — but there are injury bugs, and then there are injury dragon wasps. The assault on Georgia’s health meter began on the Bulldogs’ very first drive in the 2013 season opener, felled one offensive skill player after another, and, for a grand finale, claimed Aaron Murray’s ACL in the penultimate game of the regular season.

Many of 2013’s myriad victims — running backs Todd Gurley and Keith Marshall and receivers Malcolm Mitchell, Justin Scott-Wesley, and Michael Bennett — will look to return healthy for 2014, though their spring participation will be limited. They make up a formidable arsenal, and one that will be a big boon to fifth-year senior QB Hutson Mason in his first season as the starter, behind an offensive line that returns only two starters.

In reaction to defensive coordinator Todd Grantham’s surprise defection to Louisville, Mark Richt scored a noteworthy coup in luring Jeremy Pruitt away from Florida State. Where last year’s Georgia defense was extremely green, Pruitt has 10 returning starters to play with this time around. And where Grantham liked his schemes intricate, Pruitt seems content to have guys who can block and tackle. FOCUS ON FUNDAMENTALS is bronze-etched coachspeak, but after last season, there are worse tactics to try than “not what Todd Grantham was doing.”

Will Russell Hansbrough or Marcus Murphy distinguish himself as Henry Josey’s successor after giving merry chase to the Tigers’ star tailback last season? Or maybe the question is: With such distinct skill sets, would the team be better off going back and forth between the two? Discuss.

• Who Is He? New Florida offensive coordinator Kurt Roper.

• Follow the Bouncing Ball: To track Roper, for the most part you need only track David Cutcliffe. Roper left his GA position at Tennessee following the 1998 season to become Cutcliffe’s quarterbacks coach and later passing game coordinator at Ole Miss, and served on Cutcliffe’s Duke staff as OC/quarterbacks coach from 2008 to 2012, adding the title of assistant head coach in 2013.

• Bio Tidbit: He’s stuck with football despite coaching in three Independence Bowls, which speaks well to his tenacity.

• Should We Know Him? You’re about to, whether you really want to or not. Regardless of how much freedom he’s actually going to have to dictate the evolution of the offense, the guy in charge of getting the Gators up above last season’s abominable 18.8 points-per-game average is going to have a searchlight trained on him from Week 1.

Tennessee: And Now for Something Completely Different

We’ve discussed the Vols’ prospects at length already this offseason, but can’t let you go without sharing this video of quarterback Joshua Dobbs celebrating Pi Day earlier this month:

Thank you for your time.

Robin van Persie has been ruled out for "four to six weeks" by Manchester United after being injured in Wednesday's Champions League victory over Olympiakos.