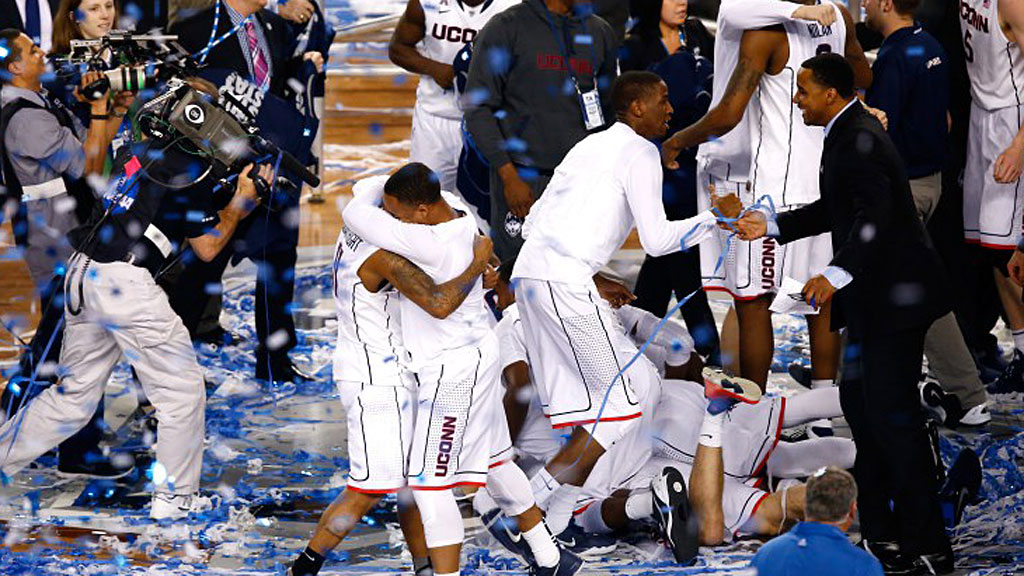 What was the best in sports this week? And what stories made everybody hate sports just a little bit? Let’s talk about it. The NBA playoffs start next weekend, and those will dominate our Triangle lives for the next two months, so this is probably the last edition of this weekly wrap-up for a while. Let’s make it count.

We begin with the NCAA tournament.

UConn won the national title this week, and it was great for several reasons. Because watching Shabazz Napier and Ryan Boatright weave through every defense they face was a novelty that never got old. Because it’s impossible to root against Kevin Ollie. Because it’s always fun when a team comes out of nowhere to win a title like that. Even Kentucky fans couldn’t be that upset. If someone else had to win, UConn was more fun than Florida or Wisconsin.

But I was there, and the best part of it for me was one moment afterward. UConn had been celebrating for about 20 minutes, and the court was full of reporters and family and god knows who else, and in the midst of all the chaos, everything just stopped.

The NCAA tells the winning team to stop and watch, so in some ways the moment’s as contrived as the montage itself. But the reactions from the UConn team weren’t. Everyone went silent and wide-eyed, grinning at everything they were just part of. It was the kind of moment that makes you catch your breath a little bit, and the kind of moment that would never happen in pro sports. 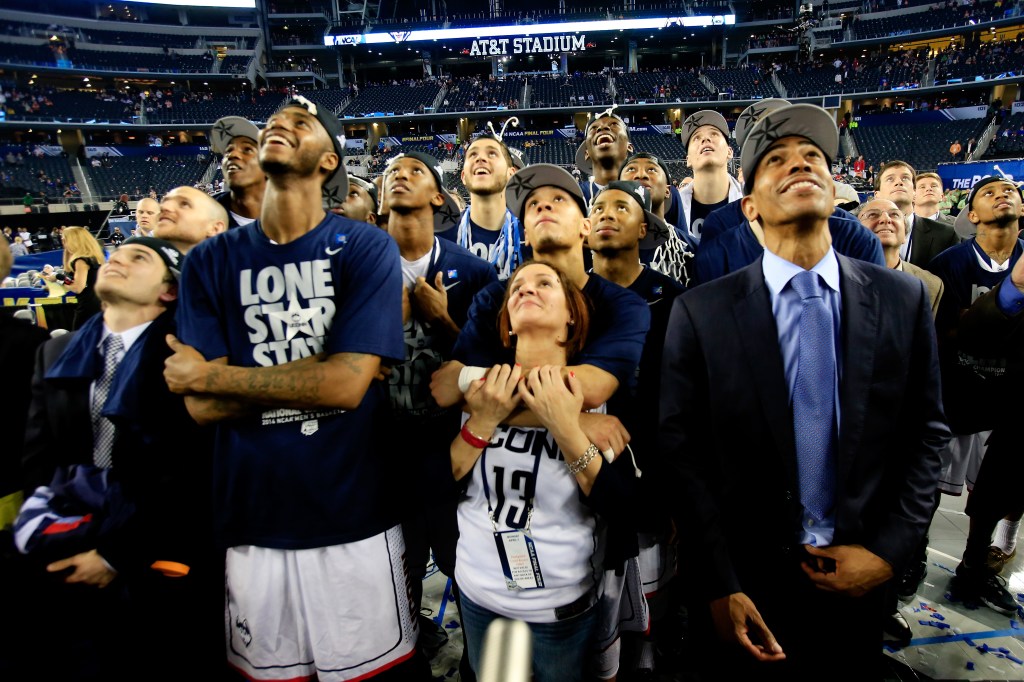 We’ve spent a lot of time tearing down the NCAA lately, and with good reason. The Daily Show nuked the administrators as well as anyone has last night. But while everyone explains why college sports are corrupt and hypocritical and awful, moments like the one above remind us why they’ve always been so cool to begin with. Not everything in college sports is broken. Or to put all this a little differently: We can all focus on the problems killing college sports, but in that moment I remembered why it’s worth trying to save them.

BEST: Kliff Kingsbury, People’s Head Coach. Almost exactly a year ago, we got video of Texas Tech coach Kliff Kingsbury rapping along to Biggie and calling a player’s outfit “murdered out.” Today, a Texas Tech dance contest where Kingsbury jumps in at the end, tears off his shirt to reveal another shirt that reads “TOO TURNT UP,” and then does the stanky leg. Or something. Bottom line: Kliff Kingsbury is quickly becoming one of the greatest humans in sports.

BEST: ESS-EEE-SEE. The best thing you’ll read this week is this extensive profile of a college football bag man in the SEC, from Steven Godfrey and SB Nation. It explains in glorious detail the ways boosters find ways to pay college football recruits — with codes, and burners, and plausible deniability at every turn — and it’s roughly the 5,000th example we’ve gotten that SEC football is twice as insane as every other sport. Maybe European soccer could compete on a global scale, but nothing else in America. Anyway, check it out. The SEC is amazing.

WORST: Horrible News. One of the cool things about sports in 2014 is that it’s easier than ever for fans to know the truth about exactly how sports work. Whether it’s that story about SEC recruiting, or NFL hypocrisy, or the NCAA’s greed, Twitter and the rest of the Internet make it harder than ever for institutional bullshit to hold up, and theoretically, this will help make sports better in the long run.

It’s not to say knowing any of this stuff is bad. Guys who do awful things deserve to be shamed. But for the rest of us, it requires a lot of cognitive dissonance to follow sports every day in 2014 and continue loving it. This week provided a few separate reminders.

WORST: Whatever Happened With Colin Kaepernick in Miami. In the past, we’d have just heard there was an ongoing investigation into something that happened with Colin Kaepernick, two other NFL players, and a woman in Miami. Now, we see the details from the police report about an hour after the news breaks, and it’s not clear what exactly happened, but it all sounds pretty shady and awful. (As of Friday, Kaepernick is denying any wrongdoing.)

WORST: Whatever Happened With Dorial Green-Beckham. Even worse, because the police report seems pretty clear about what allegedly happened, but the woman isn’t pressing charges because she’s intimidated by the potential backlash from her college town.

WORST: Every Update From the Oscar Pistorius Trial. Awful.

BEST: Derrick Gordon. OK, in the interest of proving the world isn’t always horribly depressing … Here’s the story of Derrick Gordon, UMass guard, seeing Jason Collins’s example and eventually deciding to come out himself and tell his team he’s gay. Gordon’s backstory is just as interesting — he played with Kyrie Irving and Michael Kidd-Gilchrist in high school, and basketball saved him from the gang life that put his twin brother in prison — and reading about the peace he’s feeling now was one of the two most enjoyable things in sports this week.

BEST: C’mon, Man. Hearing Serge Ibaka handicap the MVP race was the other one.

BEST: NBA Awards Season. I found out this was happening courtesy of Zach Lowe’s new podcast, which you should listen to because it will make you a lot smarter. But yes, apparently NBA teams are sending out little promotional packages to all NBA voters, trying to sway their votes for the end-of-season awards. Some examples:

A Superman case for Dwight Howard, complete with a cape and a copy of the Daily Planet. (Via Chuck Cooperstein.) 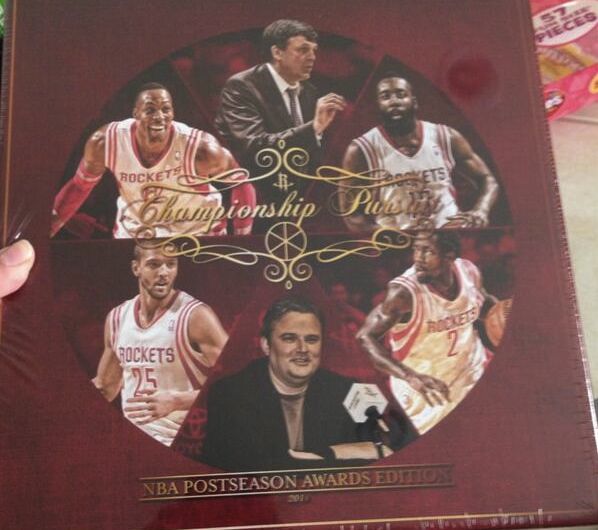 Zach was complaining about all this junk filling up his apartment, and that’s completely fair. At the same time … it’s pretty great that all these awards are somehow turning into the NBA’s answer to Oscar campaigns. Mostly because it presupposes that people actually care this much about who wins Defensive Player of the Year. And also because all of it makes for all kinds of NBA memorabilia that will be hilarious a few years from now.

Wouldn’t you want that unibrow to be in the Hall of Fame with Anthony Davis one day? Whether Houston wins or not, wouldn’t it be fun to look back on the box of Championship Pursuit?

Or the Big Al paint set?

Apologies to Zach’s apartment, but let’s keep this stupid trend going forever. And actually, forget the Hall of Fame. Ten years from now, I would go to a separate basketball museum full of random team promotions for All-NBA first team.

WORST: The NFL and the Wonderlic Test. All right!

Believe it or not, a high Wonderlic score scares some NFL Coaches. They wonder if the player is "too smart for his own good".

Compared to the “worst” sections above, this is a breath of fresh air. Of course NFL scouts are second-guessing players who might be too smart. It’s kind of comforting knowing that no matter what happens in modern society, NFL scouts will always operate like it’s 1968.

BEST: Jayson Werth. This is some of the only baseball I’ve seen this year, but it was awesome. The Nats were down one in the bottom of the eighth, two men on, and the Marlins decided to intentionally load the bases. 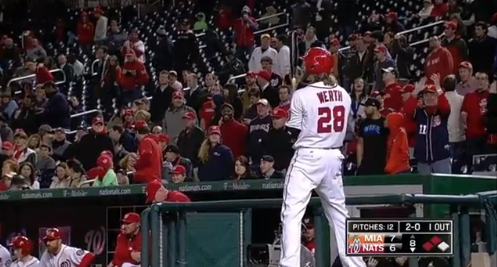 Announcer No. 1: “They’re gonna walk Rendon, and go right-handed for right-handed with Werth … How ’bout the respect for Anthony Rendon here?”

No. 2: “How ’bout the disrespect for Jayson Werth?”

[Cut to angry Jayson Werth pacing in the on-deck circle.]

Then? First swing, Werth destroys a baseball for a grand slam. So much #NATITUDE in this three-minute YouTube clip.

WORST: The Exorcism of Quincy Miller. So haunting.

You can actually see his soul leave his body.

Of course. The tradition of killing basketball players on Wikipedia is just more proof we are living in America’s greatest generation.

We’re done for the week. Have a great weekend, and RIP QUINCY.

Triangle Cheat Sheet: Five Contenders to Watch at the Masters