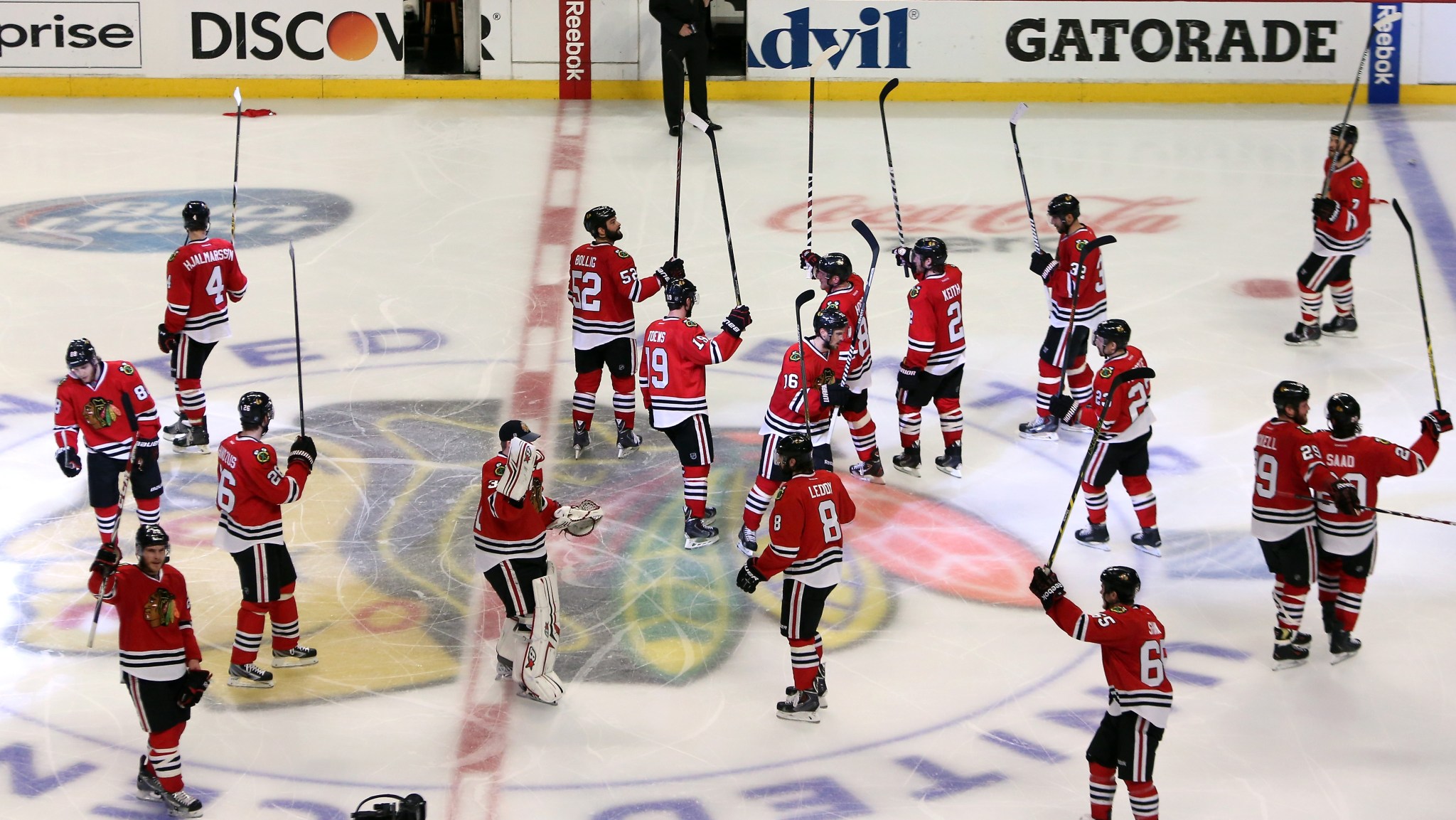 In case you were busy losing an arm wrestling match to a punter, here are the top six stories you missed in sports on Wednesday:

In series that will last at least one more game:

Patrick Kane had four assists, including one on 37-year-old Michal Handzus’s game-winning double-overtime goal, as the Chicago Blackhawks stayed alive in the Western Conference finals with a 5-4 win over the Los Angeles Kings. When asked if his goal was extra sweet given that it came against his former team, Handzus replied, “I’m just hoping that now that I’m off the schneid, Patrick will stop making my name into stupid puns. Every goddamn day it’s ‘Hands us this, Michal’ and ‘Hands us that, Michal.’ My life since coming to Chicago has been a waking nightmare.” Handzus then looked across the locker room at Kane, who was declaring loudly to the massive grouping of press that surrounded him: “I handed him the puck and he Handzus the game! And you can quote me on that!” Handzus turned back to the handful of reporters still listening to him. His shoulders dropped, and he let out a deep sigh before whispering, “Please, please don’t quote him on that. Please.”

Paul George scored 21 fourth-quarter points to lead the Pacers to a hard-fought 93-90 win over the Miami Heat, forcing a Game 6 in the Eastern Conference finals. “How is this not over yet?” asked Pacers center Roy Hibbert, who despite putting up a double-double continues to look inexplicably off his normal All-Star pace. Hibbert then started slapping himself repeatedly in the face while yelling, “Wake up, Roy! Wake up! It’s all a dream! You’re an orthodontist in Orlando! This is not your hellscape of a life. When you wake up you’ll be free! Wake up! Wake up!” Hibbert reportedly only accepted that this reality is not a simulacrum when teammate Lance Stephenson blew in his ear and he still didn’t wake up into a happier plane of existence.

In choice purchases if you have the means:

Shelly Sterling and her advisers received a number of bids of more than a billion dollars for the Los Angeles Clippers as she continues to move aggressively to sell the team her husband has owned for decades before the NBA can take control of the franchise. The sale is a bit of a good news/bad news proposition. The good news for the Sterlings is that hastening the inevitable sale of the franchise could save their family tens of millions of dollars in capital gains taxes. The bad news for the family is that their name will be forever associated with being a racist scoundrel, and no amount of tax relief will change that fact.

In a long walk avoided:

Tiger Woods will miss the U.S. Open as he continues to recover from March back surgery. Woods, who hasn’t won a major since 2008, also fell to third in the world rankings this week. All of this means that an injured Tiger Woods in the midst of what qualifies for him as a six-year slump that was hastened by the very public dissolution of his most important personal relationships and a number of surgeries, any of which would likely cause the average person to never play golf again, is still objectively better at his job than everyone in the world except for two people. And one of those people is Henrik Stenson.

In Cy Young winners of the past:

Bartolo Colon struck out nine for the Mets as they topped Pittsburgh, 5-0, while Felix Hernandez also fanned nine as the Mariners beat the Angels 3-1. Don’t look for any evidence of these pitching performances, though; they’ve both been redacted and deemed highly classified by their respective teams in the hopes that keeping the fact that there are two healthy pitchers competing at a high level under wraps may allow them to avoid undergoing Tommy John surgery for at least another week or two.

Despite having a no-hitter going through five innings, Tim Lincecum was pulled because of an elevated pitch count, leaving five Giants relievers to combine for a two-hitter in San Francisco’s 5-0 win over the Chicago Cubs. When asked if he was disappointed about missing a chance to record his second career no-hitter, Lincecum replied, “Nah, man. It’s cool. I got a chance to watch some baseball and really let my mind wander. Dude. Dude. Have you ever thought maybe we’re all just shadows walking around the dreams of a giant in Indiana? And, like, if he ever wakes up we’ll all cease to exist? And the burden of him knowing that means he’ll inexplicably get worse at his job every day?” Lincecum then put his hand on a reporter’s temple and added, “It’s cool man. Let it happen. Let your mind be blown,” before blowing in the reporter’s ear.