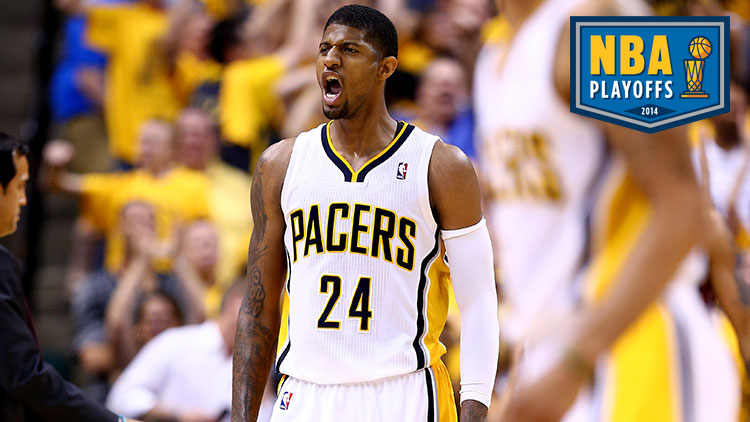 May 29, 2014
by Danny Chau, Andrew Sharp and Jason Concepcion

netw3rk: The Pacers’ 2013-14 season has been a journey into basketball schizophrenia. Nothing makes sense. They started the season 15-1 as a relentless vise, squeezing opposing teams into low-quality attempts and sub–39 percent shooting. The core of their team, their identity, seemingly rock-solid. All that was left was to tweak the finer details — some bench depth, another ball handler, maybe.

The magnitude of the slump that followed is probably best measured not with stats but by the incredible diversity of hypotheses put forth to explain it. I do think it’s notable that dips in an athlete’s performance are often hypothetically attached, by the vast sports-discourse organism, to bullshit-ish celeb-fodder rumors — e.g., some person related to said player is having/did have sex with a third party, possibly a teammate. It’s a strain of thought that somehow manages to feel inanely juvenile to consider while also seeming vaguely kinda possible. My B.S. hypothesis on jump-off hypotheses is that they represent some root-deep mechanical quirk of the human experience.

So, anyway, down 3-1, collective necks stretched over the headsman’s block — coming off a double-digit loss where they cracked under Miami’s defensive pressure, and down 42-33 at halftime of Game 5 — the Pacers survive. At times, they thrived, Paul George in particular. The Pacers are a team whose offensive approach looks like a deliberation scene from 12 Angry Men pretty much all the time, which makes explosions of the type George had in the second half even more startling: 31 points, 5-of-10 3-pointers, four steals. It was only the sixth game in his career in which he took more than 25 shots.

Weirder still, LeBron — for only the 28th time in his career — had five fouls, many of a kind that George probably considers home cooking. There, I just invented a Paul George rumor.

So, this is the Pacer box score over final 14 minutes of Game 5. (nod to @ScottAgness pic.twitter.com/s1wNb7crAM

One Last Dance With LAAAAAAAAAAANNNNNNNNCE

Andrew Sharp: Here’s when I knew we were getting a great Lance Stephenson game Wednesday: Season on the line, back against the wall, ESPN cameras caught him pregame with his back to the basket, flipping 3s over his head. This was our sign that all was well. Somewhere in Bankers Life Fieldhouse on Wednesday, Lance’s hype man was telling everyone they’d already booked tickets to Miami.

Sure, as the broadcast unfolded last night, we found out that even Lance’s mother had said he needed to tone it down and stop talking to LeBron. But that’s like telling a feral cat to tone it down. Nature will win out regardless.

So he was in the Heat huddle.

He was creepily blowing in LeBron’s ear like a fucking psycho.

He was out there being Lance. Out there reminding the whole world that, no matter what you think of him as a teammate, playing basketball against Lance Stephenson would be a pretty miserable experience. LeBron knows it better than anyone. He went through this last year, too, including the creepy ear-blowing.

When all of this is over, we should do our best to bleach almost all of this series from our memory, but I’ll still cherish watching Lance do everything possible to drive this team insane, while LeBron and the Heat try so hard to stay above it. I’ll cherish a reporter at an NBA press conference asking Wade and LeBron, “Have either of you ever tried blowing in someone’s ear as a defensive tactic?” I’ll cherish LeBron and Shane Battier both saying they save that move for their wives.

This might be the final Born Ready dispatch of the season, since I have zero faith in Indy winning in Miami on Friday. So with that in mind, in the face of endless “clown” and “reckless” and “fraud” criticism, here is the no. 1 defense of The Lance Stephenson Experience. It’s pretty simple. It’s actually just a question:

ARE YOU NOT ENTERTAINED? 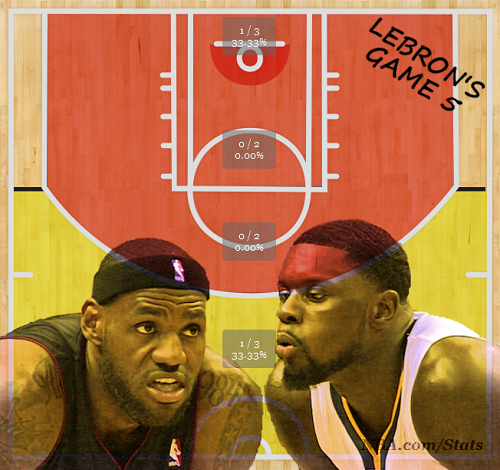 Danny Chau: The last time LeBron James had more than three fouls in a game, he had exactly seven times as many points as he did last night in Game 5. It happened two weeks ago, in Game 4 of the second-round series against the Nets. He scored 49 points, 40 of which came in the first three quarters. He had five fouls, three of which came in a minute-and-a-half stretch late in the fourth quarter. But he’d already made an imprint on the game. Game 5 of this Heat-Pacers series was something altogether different.

Last night, LeBron had two fouls after the first quarter, got his third foul after playing in the second quarter for only a minute, and then managed to collect two more within the first three and a half minutes of the third. More so than at any other point in the playoffs, he was a player on the periphery. He watched as Rashard Lewis, of all possible souls, took over. He was reduced to being a bookend player. His two most notable plays occurred at the beginning and the end of the game — an alley-oop play that put the first points on the board, and a game-saving chase-down block near the end that gave the Heat a chance to take the series.

The opening alley-oop was a sucker punch, almost gratuitous in the way LeBron was brandishing his still-freakish athleticism. He’s somewhat reined in the orgiastic exhibitions of his physical superiority in recent years, which made the play — wherein he swung so forcefully on the rim, it’s conceivable he could have flipped on over to the other side if he so desired — all the more surprising. In hindsight, reining in a few things might’ve kept him in the game. Then again, most of the fouls he committed were close calls.

We can discuss the drive-and-kick to Chris Bosh that failed. Maybe LeBron should’ve saved his one ruthlessly athletic play for the final Heat possession instead of the first one. (OK, that’s about all I have for this discussion. Good talk.) It’s hard to glean much from the biggest anomaly in LeBron’s playoff career. Maybe this is being too reductive, but Paul George outscored LeBron James by 30 points and the Pacers only managed to win by three. The Pacers did what they needed to do and took advantage of a beautiful situation. Now, what happens once LeBron returns to form?