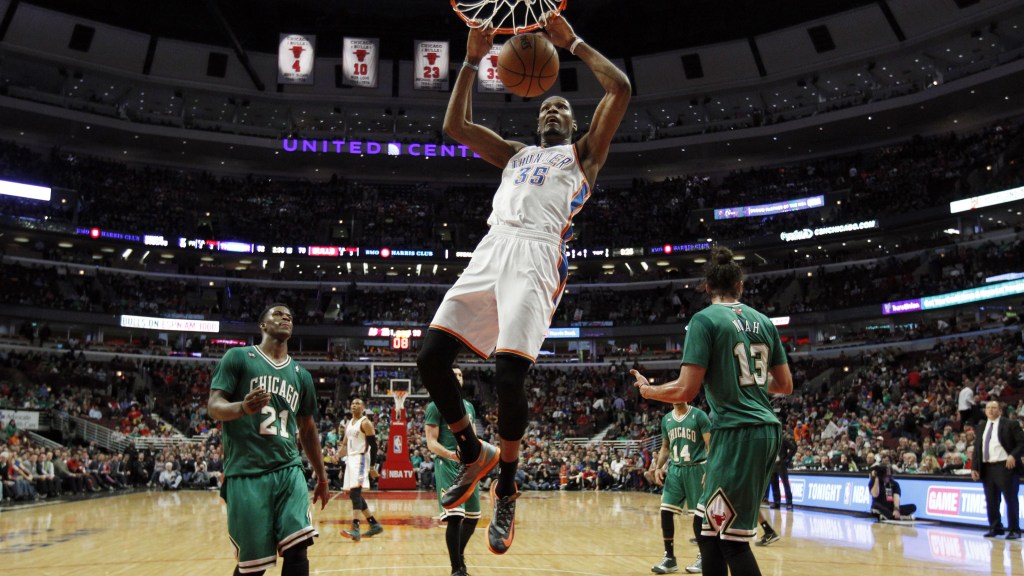 In case you were busy thinking really hard about putting together an earthquake preparedness kit, here are the top six stories you missed in sports on Monday:

In the pro hoops we watch as we bide our time until the tournament starts:

Kevin “Muffins” Durant posted his 32nd consecutive 25-point game as the Oklahoma City Thunder shook off their worst loss of the season with a 97-85 win over the Chicago Bulls. The single-season streak is the second-longest behind Michael Jordan, who strung together 40 consecutive 25-pointers in 1986-87. Durant, of course, wasn’t even alive when that streak happened, as he was born in 1988. Wait a second … is it possible that the record scoring streak is Durant’s father? I mean, sure, it would mean that Durant would have gestated for an unprecedented 18 months, and also that one of his parents is an abstract concept rather than a person, but think about it … a boy whose father is the record-breaking act of scoring itself would naturally grow up to be Kevin Durant. Plus a streak like that would be incredibly virile. There’s only one other possible explanation, which is that Durant’s father is his father. But, if you ask me, I’m leaning toward the streak.

Kenneth Faried and the Denver Nuggets snapped the Los Angeles Clippers’ 11-game winning streak with a 110-100 win. Faried also found himself the latest to engage in a physical altercation with Blake Griffin during the game. “Screw that dude’s neck,” Faried said after the game by way of explanation. “I hate it so much. Which is too bad, because Blake’s a good dude, and if he wore one of those whiplash braces I think we could be good friends.”

The Cowboys have signed former Browns quarterback Brandon Weeden to back up Tony Romo (and possibly Kyle Orton) for the upcoming season. Though relatively inconsequential, the signing does have one unfortunate side effect: I’m now rooting for Romo to get injured. This is terrible. I like Romo! Think he’s underrated, even. But come on, the world is a hard place to live in; we all deserve at least one week of Brandon Weeden, starting Dallas Cowboys quarterback.

The Kansas City Royals beat the Texas Rangers, 6-0, in a spring training matchup notable primarily for Elvis Andrus producing this. That’s amazing, right? That is goddamn majestic. I mean, seriously, holy crap. When did he have time to grow that beard?

In meaningful yet depressing baseball news:

Both A’s starter Jarrod Parker and Braves starter Kris Medlen are slated to miss all of 2014 after being diagnosed with elbow injuries requiring Tommy John surgery. “On this day of all days,” said a depressed Parker upon hearing the news. “I wear green every day. How does that not give me St. Patrick’s Day immunity? How? Explain that to me, Neil deGrasse Tyson.” While Tyson was unable to be reached for comment, Degrassi: The Next Generation star Stefan Brogren was asked the question, to which he responded, “I have no idea what any of that could possibly mean, except to say I don’t think the clothes people wear have any impact on their medical prognoses. But again, I don’t know what I’m talking about and don’t know why you called me.”

Jarome Iginla scored two goals and Tuukka Rask had 33 saves as the Boston Bruins beat the Minnesota Wild, 4-1, running their winning streak up to nine. “RASK! RASK! RASK!” Rask chanted after the game when asked what the key was to the Bruins’ dominant form. When asked if he was referring to his own play or was speaking in some sort of code, Rask growled, pointed at defenseman Zdeno Chara, and added, “RASK! RASK! RASK!” When asked if three Rasks meant Chara, Rask grew visibly impatient and pulled out a crudely forged scimitar, before David Krejci stepped in to translate three staccato Rasks as meaning either the combination of Chara and Patrice Bergeron, or an angry bear god that will soon take vengeance on us all.