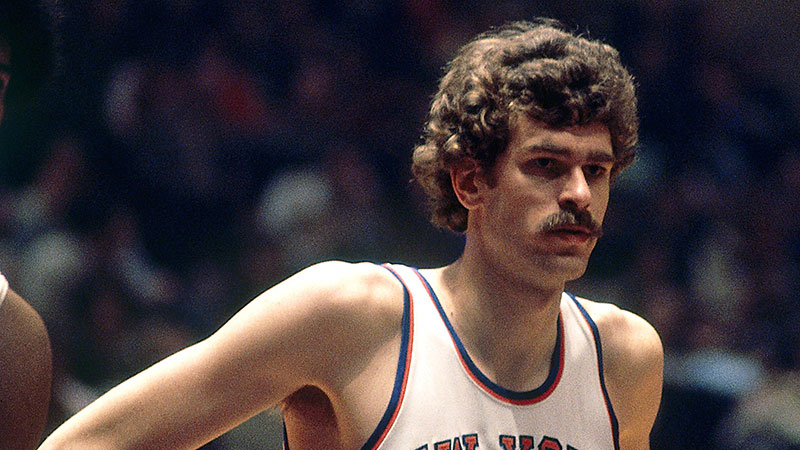 Whenever the Knicks are in the news, we like to have Jared Dubin and netw3rk weigh in on matters. With Phil Jackson announced as the new front-office figurehead of the organization, our two long-suffering Knickerbocker aficionados take stock.

Jared Dubin: It feels like the Knicks have been flirting with Phil Jackson my entire life and he finally agreed to go to the prom with them. How many “Phil Jackson is coming to save the Knicks!” rumors have we heard in the last 10-15 years? Thirty? Forty? That it’s actually happening is pretty surreal.

We still don’t really know what Phil’s actual role will be, where his base of operations will be, what will happen to Steve Mills, to Creative Artists Agency, to Carmelo Anthony, or to Mike Woodson. We’ll presumably get answers in the days and weeks to come, but initial reaction here has got to be something along the lines of “HOLY SHIT!!!!” right?

netw3rk: The last decade and a half of Knicks fandom has steeled me for anything: Dolan could announce that the Zodiac Killer is the new president of basketball operations. Or he could start the press conference by locking the doors behind the assembled media, and pulling up his sleeve to reveal chain mail under his pinstripe suit as “The Rains of Castamere” begins to play. I could even see Isiah Thomas coming up through a trapdoor behind the lectern wreathed in dry-ice smoke and lasers, like an episode of Monday Night Raw.

This is like a Joseph Campbell–esque archetypal myth: the chosen hero returning when he’s needed most, to take on the challenge only he can face.

Hiring Phil is the right move, even if it is in a broken-clock-is-right-twice-a-day kind of way. The Knicks have always overvalued big names, imbuing them with messianic import. Ewing, Melo, Pat Riley have all been called “saviors”; fans and pundits wondered if they could deliver us to “the promised land.” It’s the kind of move we’ve seen from this team before, just never on this scale.

This is about  “accountability.” This is a franchise that has been so disastrously managed, so haphazardly coached, so riven with shadow loyalties; it has seen dozens of names arrive, feted with MSG channel biography spots, and disappear in a puff of smoke and draft picks. What fans and even players desperately want is for someone to take responsibility for it. Phil has the stature to do just that.

Dubin: Phil’s stature is the only reason this is happening, too, right? Dolan wouldn’t be giving up control of the organization to someone like Sam Hinkie. He probably wouldn’t give it up even for R.C. Buford, who’s been the best executive in the league for nearly a decade.

Nope. Just Phil Jackson. Like you say, it’s the big-name syndrome again. But anything that convinces Dolan to give up any measure of control has to be considered a postitive. The big question is whether Dolan will stay out of the way, or if, as he did during the Melo trade negotiations, he’ll just butt right back in whenever there’s a big move for another big name to be made.

I’m assuming Jackson will have the space and authority to hire his people early on. This both excites and scares me. He clearly knows how to build a winning culture around a team — he basically has a PhD in the subject. But his “guys” aren’t exactly a list of successful luminaries. I can’t say I’d be too excited about Kurt Rambis or Brian Shaw as the next coach of the Knicks. Steve Kerr, on the other hand …

netw3rk: The subject of Phil’s acolytes is interesting because his taking this job and doing it right means assembling his own team. And, knowing Phil’s deep — like, spiritually deep — affinity for the triangle, one would have to assume this means someone from his coaching tree will be at the helm next season. Kurt Rambis’s career .279 win percentage doesn’t particularly do anything for me. Brian Shaw is in the first year of a reported three-year deal; he’s not going anywhere. Craig Hodges is coaching something called the Halifax Rainmen. Jim Cleamons? Steve Kerr? Who knows.

I’m less interested in whom Phil might hire than I am exhilarated by the prospect of the Knicks actually having an ethos and an identity. The Knicks are a team of parts acquired with little to no regard for how they might fit together. The triangle would at the very least offer a framework.

Think about it: Mills is a blank slate whose moves, such as they are, might actually be Dolan’s moves or CAA’s moves or who the hell knows. Woodson’s coaching philosophy is a verbal commitment to defense that in no way mirrors an on-court reality. And he has a fundamental distrust of the small-ball offense that is the team’s strong suit. Melding Melo’s game with Amar’e’s has been a struggle. There is no synergy between the front office, the coaching staff, and the players, no through line linking all levels of the organization.

Ignore the questions about coaching personnel and whether the team’s players fit the triangle. The triangle means structure. It’s like the difference between free-jazz improv and trying to play an actual song.

Dubin: The league’s best franchises all have a synergy that extends from the front office down to the coaching level and then onto the court. Buford connects to Pop connects to Duncan; Riley connects to Spoelstra connects to LeBron, etc. If Phil can instill even a little bit of that in the Knicks, it’s a massive improvement over whatever it is we’ve been watching for the last 15 years. During that time period, the only direction the Knicks have had was, as I said the last time we exchanged emails: “WIN NOW, RIGHT NOW, AT ALL COSTS, EVEN IF THOSE COSTS ARE DRAFT PICKS AND PLAYERS AND MONEY AND LIVES, DAMN IT.”

But here’s the thing about structure, ethos, identity, whatever you want to call it: The stuff at the bottom of the food chain matters. And if Phil is really going to be a top authority figure who has final say but doesn’t run the day-to-day operations hands-on, those subordinate pieces suddenly become a hell of a lot more important.

We know how important building a culture in and around an organization is to Phil, and we know he can do it from the inside of a locker room out.

We don’t know if he can do it from the outside in. That’s why the who and the why of his hires are just as important as his (presumably) being allowed to make them in the first place.

Phil doesn’t seem like the kind of guy who would sign up for this job with this organization were there not some sort of guarantee he’d be able to do things his way, but this is not traditionally an organization that just allows its employees all that much in the way of autonomy. Specifically, what I’m getting at is this: How will Phil’s open-mindedness and penchant for tweaking people through the press mix with the notoriously prickly relationship the Knicks have had with the media?

netw3rk: It won’t mix. I mean, Phil has eventually clashed with every front office he ever coached under. The Knicks’ organization is a notoriously stage-managed corporate media dungeon, and Phil is an outspoken interview subject and wildly individualistic writer of locker-room gossip tomes. I don’t see the Knicks suddenly changing their media policies any more than I see Phil agreeing to them. But that’s the beauty of the thing!

Phil’s entire approach to basketball and life is antithetical to everything the Knicks have been about in the Dolan era. Openness versus restrictiveness. Reads and sharing the ball versus ISO. Counterculture versus corporate. As much as anything else we’ve talked about, Phil’s potential to be a culture-shifting influence within the franchise is a reason for Knicks fans to be hopeful.

It’s going to be a power struggle between Phil and Dolan/CAA. History tells us it’s likely Phil loses that war in the long run; let’s just hope he wins some battles before then.

Dubin: I’m not sure the man who fancies himself the Zen Master would appreciate your combat analogy, but I do agree with you. This will end badly. Things always do. Otherwise, they wouldn’t end.

Gerald Henderson and This Dunk: A Missed Connections Ad