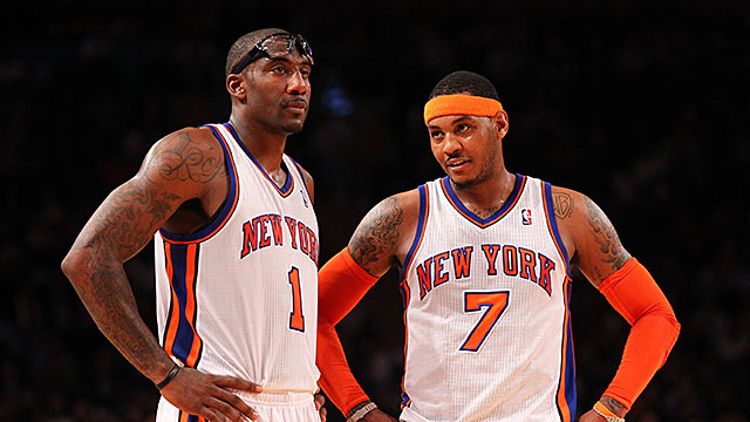 The Knicks have lost nine games in a row. In the last couple of days, Iman Shumpert lit up Carmelo Anthony in a huddle, reportedly for playing poor defense during New York’s loss to New Orleans. Shumpert spent the rest of the game on the bench. Since then, it’s been reported that Kenyon Martin and Metta World Peace got into a heated argument, and Mike Woodson has called the perception that he does not like Shumpert “bullshit.” We asked our two biggest Knicks fans, Jared Dubin and netw3rk, to take stock and try not to ingest any hemlock in the process.

I have spent the last week with a fever, violently evacuating effluvium from my various orifices. So now that I’m semi-back on my feet, let’s talk Knicks. Excuse me. [Disappears into the bathroom for 30 minutes.] OK, the New York Knicks are 10 games under .500 after losing to the partially Unibrow-less Pelicans. They managed this feat with the help of well-timed turnovers and the Memento-like way in which they approached defending Ryan Anderson (7-of-11 from three, 31 points). They also managed to waste a six-block, seven-rebound performance from Andrea Bargnani, who continues to play kinda well while seemingly floating in a vacuum of total despair.

“Play better lineups” is an idea that feels pretty obvious, especially as J.R. Smith continues his Jackie Chan-like assault on basketball decorum, but is it really that simple?

Jared Dubin: Yes. But also, no.

That’s the thing about this Knicks season. Everyone keeps trying to boil it down to one thing or another, but it’s not nearly that simple.

The problem is, while nothing is necessarily THE problem, EVERYTHING is A problem. Just because there isn’t one thing you can point to and say, “Fix that, and it will all be OK,” that doesn’t mean there isn’t a whole lot of stuff gone rotten. The rotations, the offense, the defense (good lord, the pick-and-roll and transition defense), the general mood of and around the team … man, is there anything that isn’t a disaster right now?

We can plead for Pablo to get more minutes, for Woodson to run fewer isolations, for a change to the pick-and-roll coverages, to free the Knicks City Dancers — but unless it all happens at once, it’s hard to believe it will do much good. Right?

netw3rk: Well, what are we talking about? Part of the existential problem with the Knicks has always been the ambitious nature of the team’s goals in relation to the circumstances.

Even in the depths of the Isiah Years, the team couldn’t help but talk about how the goal was to win a championship, like some demented street preacher screaming from the curb. There’s enough there that minor tweaks could — should — result in a .500 team, a playoff team. These are attainable goals.

Christ, it’s practically embarrassing to be writing this, considering that currently, the Knicks are relevant via force of market share alone.

Dubin: Speaking of market force, isn’t that essentially what drives the team’s every decision? This belief in the notion that “you can’t rebuild in New York”? Isn’t that why the Knicks have been on the “WIN NOW, RIGHT NOW, AT ALL COSTS, EVEN IF THOSE COSTS ARE DRAFT PICKS AND PLAYERS AND MONEY AND LIVES, DAMN IT” plan for every season since we’ve been alive, save for 2008-2010 when they were chasing LeBron?

If we’re to believe — as we’ve heard ad nauseam for as long as I can remember — that Knicks fans are the smartest fans in the world, shouldn’t those same fans also be capable of understanding a plan to build a team that’s a sustainable winner, rather than one that’s just chasing the short-term high?

A surprisingly large majority of Knicks fans still trust the organization, in spite of all the terrible decisions that have been made in the decade-plus since the doomed Patrick Ewing trade. Why doesn’t the organization return the favor by trusting the fans to understand what’s going on? I’m not saying I necessarily want to sit through a rebuilding project (lord knows we’ve had enough losing in my adult life), but the idea that you CAN’T do it because Knicks fans just won’t accept it is ridiculously flawed, is it not?

netw3rk: Of course win-now is flawed; you need only gaze across the river at the slightly less noxious tower of oily smoke and flame issuing from the Barclays Center to understand that. Win-now ties you to a course that allows for no intervention from fate, and giving away draft picks stifles your growth.

If you’re going to go win-now, you have to be clear-eyed about the players you’re doing it with. Unfortunately, the Knicks are a franchise with an owner who talks about Carmelo on equal terms with LeBron and Kevin Durant. Carmelo is a talented offensive player, but you do him no favors by misunderstanding the kind of player he is.

The ironic thing about dealing away the young players and picks is that the Knicks keep trying to mold 30-year-old veterans into something they’ve never been. Teach Amar’e and Melo how to play defense. Get Andrea Bargnani to rebound. Get J.R. to play under control. Make Pablo Prigioni shoot more. If you want players to develop new skills, invest in young players.

Dubin: “There aren’t young guys who are winning NBA titles.” The coach of this team made that clear before last season, which is why the Knicks went with the “sign every available veteran leader and let them veteran-lead” strategy heading into that campaign. And after winning 54 games, they let all the old guys walk because they (predictably) broke down by the end of the year. Then they jettisoned the guy who put the team together, supposedly because he pursued the strategy of signing all those old guys in the first place. You can’t make this shit up.

So the Knicks came back for this season slightly younger, but they still couldn’t help but stunt the development of the most promising young player on the team. Iman Shumpert’s been thrust into trade rumors left and right, supposedly because he wouldn’t suit up for more than one summer league game and then — in one of the most “pot calling the kettle black” situations ever — had secret knee surgery.

He’s been jerked around by the coach almost beyond belief. Rarely does Woodson call out a specific player in his postgame press conference, but that didn’t stop him from putting Shump on blast after his silly foul against Paul George at the end of regulation in New York’s overtime loss to the Pacers. And all this while rumors were swirling that Shump was on his way out, and with the coach having to field questions about whether or not he likes the guy.

Woodson’s objections aside, the club doesn’t seem particularly enamored with the only guy who has any real potential to be an above-average two-way player. It seems a foregone conclusion at this point that Shumpert is on his way out, so I ask: Why stop there?

Instead of handing Melo a five-year, $129 million deal that could lock the team into a first- or second-round playoff out for its duration, tell him to take less money so the team can build a contender around him, and if he won’t, let him walk. Is it better to just trade him for young players and picks before you’re even faced with that decision? (And is that even possible at this point?) Should they show Woodson the door and elevate Herb Williams to interim coach yet again? Or should they just get it over with and bring John Calipari in right now? The whole “blow it up” strategy comes complete with so many different options. Hard as it would be to stomach, I’ve got to admit: it’s pretty entertaining to ponder when all I get to watch on MSG at this point is loss after loss.

netw3rk: Well, here’s my solution: Find a hero, strong, pure, and brave. A hero to stand up to the dogs and the filth and the scum and divert the mighty waters of the Hudson, sending the torrent down 30th Street and into Madison Square Garden. Let the waters cleanse the unclean, drown the wicked, restore J.R.’s jumper, heal Chandler, erase all records of Amar’e Stoudemire’s contract, and sweep the whole bloated mess out into the bay.

Then we can rebuild. A true rebuild, with cap space and draft picks and flexibility and player development untethered from the Tammany-like machinations of CAA, Dolan, and the like. Short of that, I think Woodson should just play Pablo more and J.R. less.