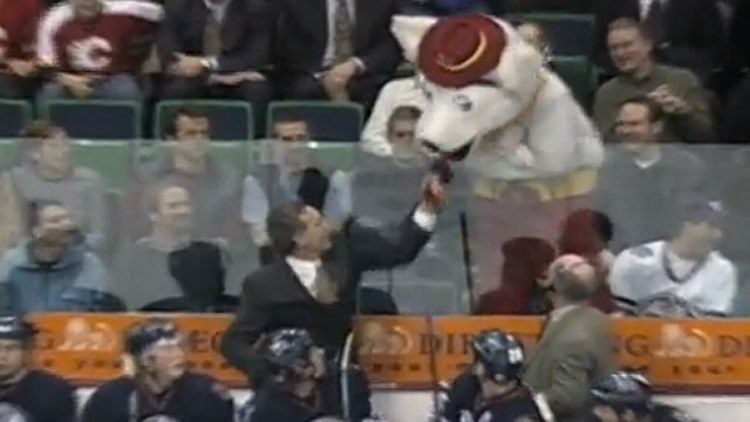 It’s been a rough week for coaches in the world of professional sports. In the NBA, one was fined $50,000 for spilling a drink on the court to get a free timeout. In the NFL, the league is investigating a coach for stepping onto the field and interfering with a play.

By contrast, the NHL hasn’t had to fine any coaches in months [everyone warily eyes Patrick Roy]. Then again, it’s not as if the league can exactly gloat about how well mannered its coaches are. In fact, the league has a long history of meltdowns, tantrums, assaults, and flat-out cheating behind the bench. Here are 10 such notable incidents from NHL history.

So Mike Tomlin might get fined for briefly stepping onto the field? Big deal. In the NHL, coaches charge onto the ice to try to pummel the official timekeeper.

Well, OK, not all coaches. Actually, only one: Mike Keenan, who attempted the feat back in 1990.


Keenan was upset over a disallowed goal, or perhaps simply mesmerized by that red-sweatered fan with the mullet and parachute pants. In either case, I think we can all agree that when Stu Grimson and Eddie Belfour are trying to calm you down, you may have taken things too far.

Jacques Demers: Change We Can Believe In

Littering the playing surface to get a free timeout? Nice idea, Jason Kidd. But as @geoffdes78 reminded me, Jacques Demers beat you to it by roughly 27 years.

Back in the first round of the 1986 playoffs, Demers and his St. Louis Blues were facing Minnesota in a hard-fought series. Three games in, North Stars general manager Lou Nanne leveled a stunning accusation: In each game, Demers had thrown coins onto the ice in an attempt to create a delay and rest his players.

Demers, being a man of unflinching integrity, quickly set the record straight: He’d only done it in one of the games, not three. “I just happened to be an honest person who didn’t deny it,” he told reporters.

That’s a good quote, but not the best line to come out of the incident. That was from Nanne, who said he assumed Demers was throwing pennies because “nickels would cost him too much.”

Demers didn’t end up having to spend any of his nickels on a fine; the league let him off with a warning.

We already broke this one down in detail a few weeks back, but no post on NHL coaches acting out would be complete without Roger Neilson waving the white towel of surrender at the officials after a series of questionable calls in the 1982 playoffs.

Neilson wasn’t the first coach to try to embarrass a referee, and he wasn’t the last. But he may be the only one who was honored with a statue for it.

Imagine you were put in charge of a truly hopeless hockey team, like, say, the 1986-87 Toronto Maple Leafs. The team is almost comically bad, but they’re young, and maybe with a little nurturing and encouragement, they could develop into a contender someday. What would you do?

If you said “spend an entire practice repeatedly slashing and spearing your terrified players,” then get yourself a kick-ass fedora, because you, my friend, may be John Brophy.

John Brophy was completely insane. He’s the best. I want him back in the NHL so much.

There must have been something about the Minnesota North Stars that really annoyed Jacques Demers, because two years after the penny-tossing incident, here he is trying to throw quarters and dimes. (Note: “Quarters and dimes” are his nicknames for his fists.)

Demers makes his second appearance on our list for desperately trying to fight Minnesota coach Herb Brooks. I’ve always loved the way Brooks does that little smirk to egg on Demers. You just know that every one of today’s agitators practices that face in the mirror for hours each morning.

A historical note here: Everyone on the ice stops what they’re doing to watch their coaches in amazement, marking the only time in recorded Norris Division history that there weren’t at least three separate player fights going on at the same time.

Demers wanted to punch out the other team’s coach. That’s clearly inappropriate, says former Kings coach Tom Webster. If you really want to get your money’s worth, you need to take a swing at one of their players.

No, really, an NHL coach punched a player in the face. This is the kind of thing that happened back in 1991, before Old Man Bettman showed up and declared that hockey couldn’t be fun anymore.

Gilmour and Webster offered up different versions of what led to the punch. This was a few years before Gilmour was traded to the Leafs, so I’m allowed to point out that he was a legendary troublemaker and probably 100 percent responsible for the whole thing. Meanwhile, this somehow all ends with Gary Roberts being pressed under a piece of glass, because of course it does.

But seriously, Tom Webster, no more throwing punches at anyone, OK?

Tom Webster Throws a Stick at a Referee

Now, this is obviously completely inexcusable, and it earned Webster the longest suspension an NHL coach had ever received. But can we just take a moment to admire Webster’s accuracy here? I’m not sure I could even come close to a stationary Zamboni if you gave me 10 tries, let alone drill a moving official.

Besides, it was just a stick. It’s not like he went completely crazy and threw a bench.

See? That would be completely different!

If you’re wondering, this incident took place in 2000 and was spurred by the officials ignoring a hit behind the Red Wings’ net that bloodied Jay Pandolfo. Detroit immediately took the puck up the ice and scored, at which point Ftorek decided the referee looked tired and would probably like to sit down.

Ftorek sat down too, thanks to a one-game suspension.

Another classic that we’ve already broken down in detail but that can’t be left off the list. Here’s Devils coach Jim Schoenfeld violently attacking referee Don Koharski after a game and/or offering him a delicious pastry, depending on whose story you’re inclined to believe.

This incident set off a bizarre chain of events that included a suspension, a court order, and a wildcat strike by NHL referees — and ended with the league having nobody available to officiate a conference finals game. Luckily, some old guys in raincoats showed up in time to save the day.

Let’s see, we’ve had coaches attacking referees, players, timekeepers, and each other. But I feel like we’ve missed one item on our checklist. Who could it be …

Oh, right … mascots! Luckily, we have former Oilers coach (and current Oilers GM) Craig MacTavish, who doesn’t like mascots very much and will occasionally rip out one of their body parts and throw it into the stands.

I’m not sure what impresses me more about Harvey here: his ability to somehow balance on top of the glass, his death stare at MacTavish immediately after the incident, or his defiant strut while taking to the ice with an extra-long replacement tongue. I’m going to just go with a three-way tie for first place, because after watching that clip, I’m pretty sure Harvey could beat me up.

By the way, 10 years after this 2003 incident, an actual journalist at an actual newspaper got to write this actual lede: “When the head of Harvey the Hound was discovered floating in the middle of the flooded Saddledome in Calgary on the weekend, Craig MacTavish became a person of interest.”

At that point, the concept of journalism announced its retirement at a hastily called news conference because it had nothing else left to accomplish. No media attended.