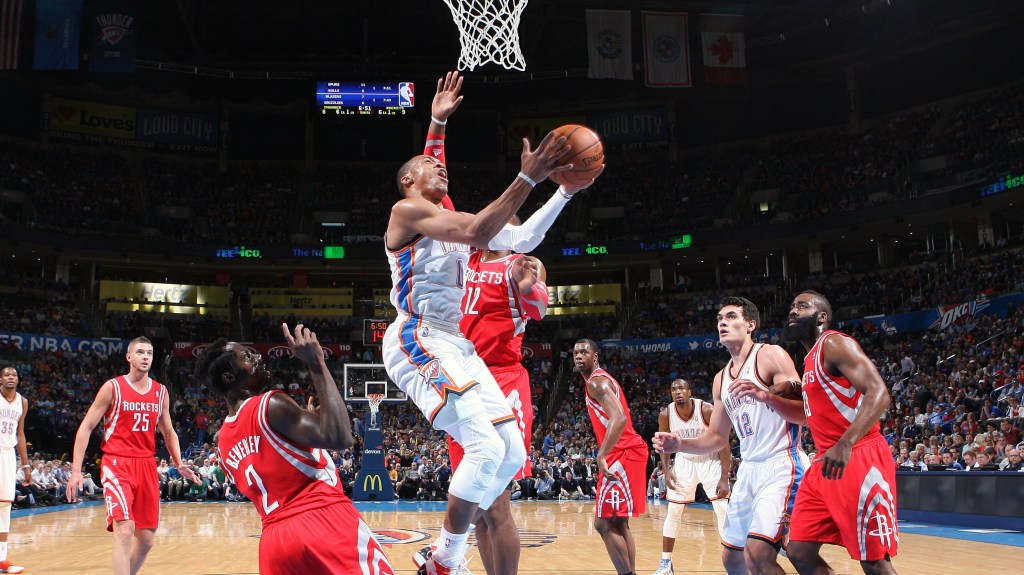 In case you were busy shooting Adam Schefter’s barista full of amphetamines, here are the five biggest stories in sports you missed on Tuesday:

In time is a flat circle and so are basketball rims if you ignore that back part:

Chalk held in the NBA, with San Antonio beating the Bulls, Indiana beating Boston, Milwaukee losing again, and Oklahoma City topping the Houston Rockets, 106-98. That last game provided a modicum of revenge for Russell Westbrook, who was injured in a collision with Rockets guard Patrick Beverley last postseason. “Yep,” Westbrook said after the game. “Really felt good to win that one. Totally made up for the surgeries, months of rehab, feelings of depression. Yep. This regular season was so worth it.” Westbrook then hung his head, appeared to question with his eyes every decision he’d ever made, and added, “Yep.”

In time is a flat circle and so are soccer balls if you draw them that way:

Arsenal managed a spirited effort against Bayern Munich, but a 1-1 draw on Tuesday was not enough for the Gunners, who crashed out of the Champions League early again with a 3-1 aggregate score. And may I add, what is the deal with this Mitt Romney? I mean seriously, could he be any more wooden! OH GOD DÉJÀ VU … have I done this item before? [Double-checks news.] Oh, wait, no, it’s fine. Arsenal really did crash out of the Champions League early again, and Mitt Romney’s still wooden. Phew. Still a fresh bit!

In time is a flat circle and so are hockey pucks if you view them from the right angle:

Another day, another win for the Penguins over the Capitals, this time by a 2-0 margin in Pittsburgh. Once again, I must say, the Antarctic menace must be stopped. If penguins are continually allowed to destroy our nation’s capital, what message does that send to our flighted enemies? I demand an immediate embargo on all consumer products coming from Antarctica until Sidney Crosby loses to the Caps. Let’s see how those South Pole humpers like that!

In time is a flat circle and so are basketball rims if you ignore that back part, and also you’re playing for college-tuition money instead of regular money:

Sixteen was the magic number for tournament qualification, as 16-16 Mount St. Mary’s grabbed an improbable NCAA bid, beating Robert Morris, 88-71, to take down the Northeast Conference title while Gonzaga secured its 16th consecutive March Madness berth. “This bodes well for the Buckeyes,” said veteran Ohio State point guard Aaron Craft while comparing Medicare Part B enrollment options. “’Cause this is my 16th year here, and I’m feeling all right.”

In time is a flat circle that has nothing to do with football free agency at all:

The Vanishing First Base Prospect