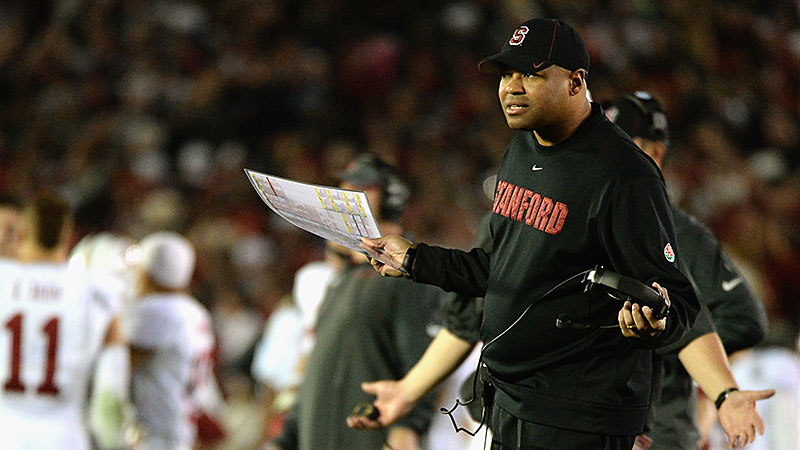 The NCAA is considering a proposal for an early signing period, which would allow recruits to formally pick their college in November or December, instead of waiting till February. Want to know why that’s a good idea? Listen to the people saying it’s a bad idea:

• Kentucky’s Mark Stoops: “If things start moving up, it changes the way we’ve been doing things for a long time.”

• Stanford’s David Shaw: “I think it’s terrible. The reason is, in my opinion, coaches don’t like when a kid commits and then switches. It’s still going to happen. If a kid wants to change after the early signing period, he’s going to appeal, and that appeal is going to go through ….”

• Georgia’s Mark Richt: “I think if you moved the signing date up, I think you push more official visits to the football season. Sooner or later … we’ll have official visits in the summer, and no one will get any time away. Not me, not our assistant coaches, not the kids, not the high school coaches, and not the families.”

If you read message boards, you’ve been hearing about a potential early signing period for a decade. Here’s how it would work: Let’s say I’m a five-star defensive tackle from Albany, Georgia. Or a quarterback from Bellflower, California. And let’s say that by the end of the first semester of my senior year of high school, I’ve had enough of “the process.” If there were an early signing period, I could go ahead and jump on a scholarship offer from Bama, Notre Dame, etc. This isn’t me “committing” to an “offer,” two concepts which mean nothing. I could actually sign.

Why is that important? One, if I’m a recruit, I might want to be spared the barrage of text messages, press calls, and other nuttery associated with the process. More important, let’s say that, around year’s end, the college coach handling my recruitment fell out of love with me. He wanted to take away my offer and give it to a defensive end from Seffner, Florida. He suggested I take a “grayshirt” or just get lost. Well, too bad. I already signed.

An early signing period would transfer a small amount of power from the coaches to the players. But it could also help the coaches. Coaches hate when players renege on their commitments on national signing day. (We Texas fans know this as The Perrilloux.) Georgia Tech’s Paul Johnson, who’s pro–early signing period, explained that if coaches gave out a share of scholarships in December, they’d know just how many they had left, and for what positions, in February.

So how could anyone be against this? Mark Stoops is arguing: We gotta great system. Actually, no. We have a really terrible system.

David Shaw thinks a recruit who makes up his mind in December will be able to change it again before February. Shaw might be right. But think again about the recruiting power dynamic. In that scenario, recruits would have a little more power. The coach would still have all the rest of the power.

Shaw added that a recruit will be pressured to make up his mind too soon. A decade ago, when the process didn’t start until late in a recruit’s high-school career, this would have made sense. But last month, LSU accepted a commitment from a 14-year-old. If Shaw is worried about recruits having second thoughts, he ought to make it easier for them to transfer, without restrictions.

Mark Richt’s objection may the strangest of all. He worries that his summer vacation — and his recruits’ summer vacations — are going to be destroyed by recruiting visits. I dunno, isn’t summer a really good time to explore your college options?

Recruiting is a pain in the ass for coaches. There are dozens of moving pieces and fickle 17-year-olds waiting to break their hearts. I get that. But this is where we have to remember that it’s not the multimillionaire coaches that need protecting. It’s the fickle 17-year-olds. They have little power and deserve some more.