The Vanishing First Base Prospect 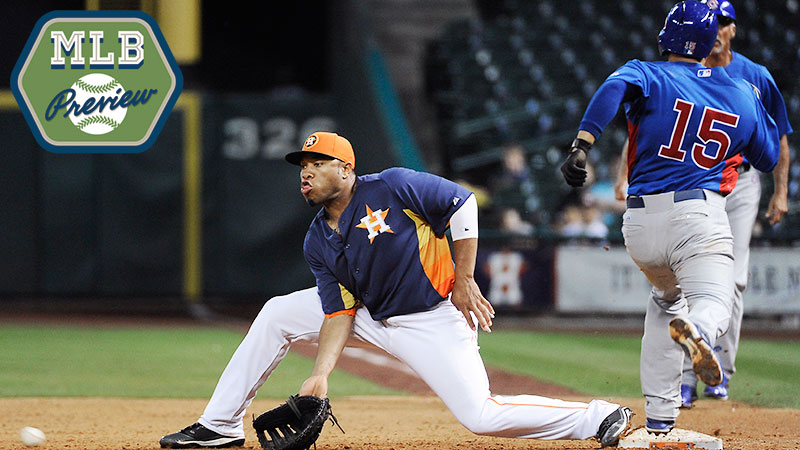 There’s really no such thing as a first base prospect anymore. Jason Parks put one first baseman in his top 100. Keith Law put two in. (I’m counting Maikel Franco, Philadelphia’s cement-shoed top prospect, as a third baseman for the time being, because there’s not much else for Phillies fans to be hopeful about right now, so just give me this one, OK? Thanks.) Go look at Jonah Keri’s spring training prospect roundup from earlier today. It’s about 4,000 words, and within it you’ll find a lot of familiar names like Fernandez, Buxton, Sano, and Bogaerts. But no first basemen.

That’s all kind of strange at first blush, because recent MVP ballots have been littered with first basemen: Chris Davis, Edwin Encarnacion, Freddie Freeman, Paul Goldschmidt, Joey Votto, Allen Craig, and Prince Fielder have all received MVP votes in the past two seasons, and you can tack on Joe Mauer and Miguel Cabrera, who are moving there this year (back there, in Cabrera’s case). Plenty of MLB stars play first base, so why is the position’s next generation not proportionally represented on prospect lists? Well, there are two reasons.

First, the next great first basemen probably are on these lists already — they’re just not playing first base yet. This isn’t really new, but it feels that way because of the increasing importance and understanding of (1) defense and (2) the defensive spectrum. We’ve always intuitively adjusted for position, expecting first basemen and corner outfielders to hit more than middle infielders, for instance, but that adjustment has become formalized in recent years, along with more advanced defensive metrics.

The more holistic measures of value, WAR specifically, adjust for position. It’s hard to find someone who can hit like Davis and play any position competently; it’s next to impossible to find someone who can hit like an MVP-level first baseman and play a difficult defensive position. That’s the real draw of guys like Mike Trout today, and Mauer and Chase Utley in the prior generation, and Alex Rodriguez in the generation before that. It’s not just a statistical apparition; it’s something we’ve understood and internalized as baseball fans for as long as the game has existed.

Look at last year’s Tigers team. Because Cabrera played third base, Fielder could play first base and Victor Martinez could DH. But with Fielder gone and Cabrera moving to first, Detroit must go with what’s most likely an inferior bat at third.

Ultimately, almost every player starts as a catcher, a shortstop, or a center fielder. As those players get older, bigger, and slower, and as the level of competition gets more intense, only the elite defenders stay up the middle, while the rest move to easier positions over time. Even Miguel Sano, who’s as likely as not to end up at first, and who is so big, he could eat fellow Twins phenom Byron Buxton, was a shortstop at 16 and was playing third base this spring before injuring his elbow and being lost for the year.

The second reason prospect lists are so light on first basemen has to do with a separate but related effect on young players who have already made the move to first base, such as the Astros’ Jonathan Singleton, who was the only true first baseman to make both of the aforementioned prospect lists. Speed and defensive ability are skills that tend to peak early in a player’s career, so as players age, they might not be able to hold down their defensive position even if they’re still hitting well. A middle-of-the-order hitter moving to first base or DH midcareer is expected. But if a player has to make that move at 21, it limits his overall potential.

Because the offensive bar is so high at first, the pressure on Singleton to succeed with the bat is proportionally higher. If Bryant hits 40 homers a year, that’s awesome no matter where he plays; if he can only hit 25-30, that’s cool as long as he’s at third or in right field. For a first baseman like Singleton, that’d be a huge drop. Bryant’s a better pure hitting prospect than Singleton anyway, but he’s 60 spots higher on Law’s list because of his offensive value relative to the position he currently plays.

In short, many of tomorrow’s first basemen are still playing third, or outfield, or catcher, and the players who are at first now get knocked down prospect lists because they don’t have anywhere else to go if they can’t hit as well as everyone hopes. Some of them will make it to the big leagues and even become stars, but prospect rankings are about probability as much as anything else, and moving to first base as a minor leaguer can lower a prospect’s probability of reaching his ceiling, to say nothing of his probability of making a meaningful major league impact. Directly or otherwise, prospect discussions reflect industry attitudes, and right now, the industry values athleticism, flexibility, and limiting the downside in a worst-case scenario. Minor league and amateur first basemen are short on all three of these attributes, which is why they’re less likely to be touted as franchise saviors. ­