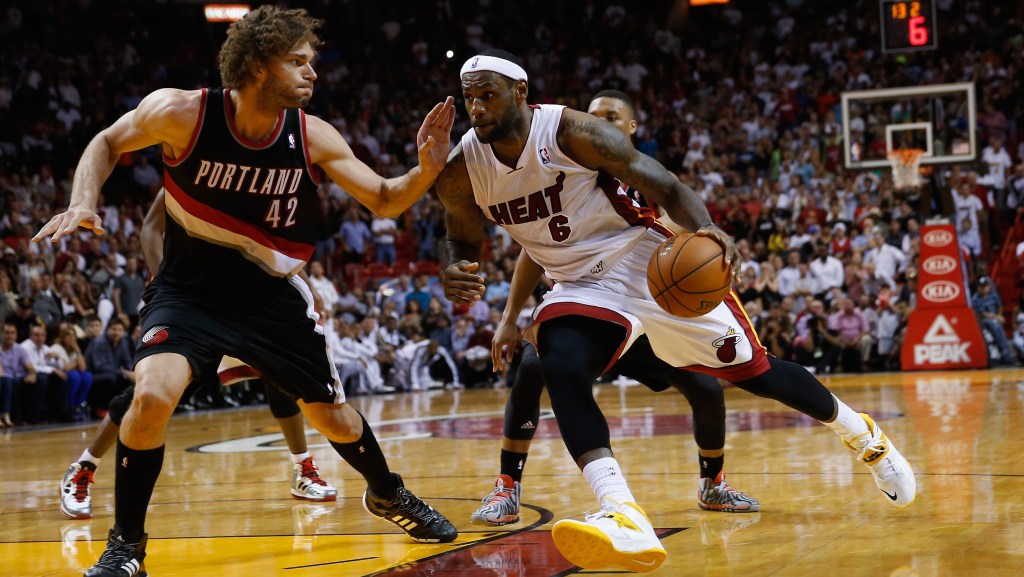 In case you were busy finding some March sanity in a warm cup of herbal tea, here are the five biggest stories you missed in sports on Monday:

Chris Bosh and the Miami Heat looked like themselves again in a 93-91 win over the Portland Trail Blazers, while the Indiana Pacers continued to struggle, losing 89-77 to the Chicago Bulls. When asked what he thought helped his team regain its form, Bosh furrowed his brow and said, “Well, I always look like myself. I mean, my form is pretty distinct. Are you talking about LeBron’s face?” When told that the form question was sort of metaphorical, Bosh waved his arms and said, “Man, this is basketball. There are no metaphors in basketball.”

Two ships passing in the night. One headed due north, toward the iceberg-laden waters of the Arctic Ocean. The other headed due south, toward comparably iceberg-laden waters in the Southern Ocean. A metaphor. But also reality for the San Antonio Spurs and the Philadelphia 76ers. Neither a basketball team any longer. The Spurs are a luxury cruise liner, carrying 14 consecutive wins and Austin Daye. The 76ers are a dinghy taking on icy water, filled with sled dogs thousands of miles from the Antarctic steppes, captained by the ghost of Shackleton and Kevin Ollie, saddled with the weight of 25 consecutive losses. Their only true hope? The sweet release of death and rebirth. Yes, the two ships played a game of basketball. And yes, the Spurs won 113-91. But the interaction was no more a basketball game than it was the wealthy tooting their steam whistle at the destitute. Was the tooting cruel or curious? We do not know. But we know it’s an eerie sound: Toot, toot, Philadelphia. Toot, toot.

In streaks that were actually snapped:

Although he fought valiantly, Tuukka Rask’s shootout concession to Montreal’s Alex Galchenyuk snapped Boston’s 12-game winning streak as the Bruins fell 2-1 to the Canadiens. After the game, Galchenyuk received a small gift box and a card addressed to him. Galchenyuk opened the card first, which had the words “RASK! RASK! RASK!” scrawled on it in red ink. Galchenyuk then opened the gift: Inside were three human toes. When asked if he sent the gift, and if he cut off his own toes, Rask laughed off the suggestions, saying, “Rask? Rask Rask!” while kicking a box labeled “Rask Feet! DO NOT RASK!” under a dirty sweater.

In sympathy for the Devils:

In the ultimate battle for control of Blue Hell, the Blue Demons of DePaul defeated the Blue Devils of Duke, 74-65, in a massive women’s college basketball second-round upset. And while the poor blue souls condemned to eternity in Blue Hell cheered for the dethroning of their master, they all know in their hearts that the Blue Demons will likely be no more forgiving. After all, you have to commit some pretty blue sins to wind up in Blue Hell.

Trading one greenish hell for another, Mark Sanchez appears likely to join the Philadelphia Eagles, where he hopes to become a fan favorite by never once taking a snap.