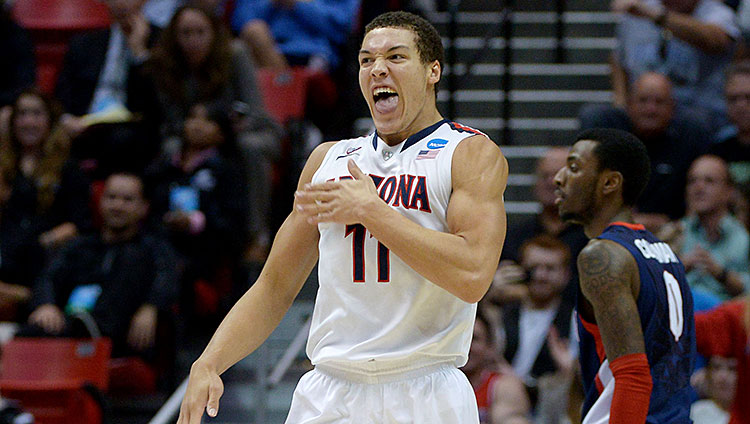 Only 20 minutes had passed since Gonzaga’s season had ended, but Mark Few had had plenty of time to reconcile his fate. Arizona made it clear early on Sunday night what sort of game it would be — one filled with Nick Johnson steals and Aaron Gordon dunks and T.J. McConnell 3s — and it never really changed its mind. “Well, we ran into a buzz saw,” a resigned Few said after the contest. He’s coached some 500 games at Gonzaga, and won a lot of them. But the 23-point beating his team took Sunday night was enough to send his mind back through all of them. “I told Sean [Miller] after the game, that’s the best team we’ve played since I can remember,” Few said.

Arizona spent part of the year as the no. 1 team in the country. The selection committee pinned it with the same badge, despite the Wildcats stumbling in the Pac-12 tournament. They have that conference’s player of the year and one of the lone remaining members of this year’s celebrated freshman crop. Everyone knew Arizona could play, but it was something to see it play like that.

The first question Miller got after the game was about his younger brother Archie, who took his Dayton team to the Sweet 16 a day earlier. Miller talked about the influence of his family and especially his father, a legendary high school coach at Blackhawk High School outside Pittsburgh. “We’re both so much a reflection of how we grew up,” Miller said. “Growing up in Western Pennsylvania, that’s Joe Namath, Tony Dorsett, Mike Ditka, football country.” It seems fitting then that Miller’s starting guards are built like and play like safeties for the Seahawks.

Johnson is 6-foot-3 and 200 pounds, and while McConnell is a couple of inches shorter, he’s put together the same way. Next to the Wildcats’ backcourt, Gonzaga’s guards looked frail. There were moments when it looked like Johnson was ready to eat Kevin Pangos whole. Arizona is, by the numbers, the best defensive team in the country, and that defense starts with the blitzing ball pressure put on by its trio of starting guards.

VCU, another team that played in San Diego last week, is also one of the better defensive teams in the country because it rips the ball away at an incredible rate. The Havoc it brings is aptly named. Arizona’s defense is more of a controlled chaos. Only 19 teams fouled less often than the Wildcats this season. When Johnson was whistled for a reach-in during the second half, he instantly raised one finger in the direction of Miller, who’d just told his team to avoid fouling. “I was just letting him know, I had one foul,” Johnson said after the game. “One too many,” Miller reminded.

That standard extends across Arizona’s entire defense. There are no leaks. It may sound ridiculous to say this about someone capable of a play like this one …

… but Gordon’s defensive highlights are as impressive as his offensive ones.

“Usually freshmen drive you crazy,” Miller said, alluding to both Gordon and Rondae Hollis-Jefferson. “They don’t recognize things. They’re late to being where they’re supposed to. These guys, many times, fuel our defense, because of their talent and because they played defense before they came here.”

What’s considered one of Gordon’s weaknesses as a draft prospect is something of a strength for college. As a player stuck between small and power forward, he’s a perfect helper on pick-and-rolls — big enough to take away lanes and space, quick enough to slow down ball handlers while deftly recovering. “Throughout the first 21 games, I was guarding 2s and 3s and switching, and now I have to guard 4s and 5s,” Gordon said last week. That’s not an easy ask for anyone, let alone someone who doesn’t turn 19 until September.

That doesn’t mean Gordon’s billing as a highlight machine is any less valid. Anyone who watched on Sunday can see why Gordon — despite his deficiencies — would entice any team picking in the top 10. On Arizona’s first basket of the game, Gordon finished off a give-and-go side pick-and-roll with McConnell for a two-handed dunk along the baseline. Later in the half, he blew by a sloppy closeout with one dribble and another flush on the opposite side. And when Arizona really put the game away, it was on a five-point surge from Gordon — an open 3 on the wing, followed by a casual reverse throwdown on a lob from Johnson.

In the moment before Johnson put the ball in the air, Gordon’s eyes got big — like they often do when he’s running in the open floor. It’s as if he has the same feeling the rest of us get, that something worth watching is about to happen. On Sundays, those plays never seemed to stop.

This weekend we saw the best version of this Arizona team — the one that spends most of the game sprinting up and down the floor. Typically, the Wildcats do most of their defensive damage without forcing a ton of turnovers, but Gonzaga spent all game handing over the ball. When Arizona’s starters left the game with a little more than two minutes to play, Gonzaga’s turnover total (21) matched its number of made field goals. The Wildcats had converted those turnovers for 31 points, many of those coming on the break.

If Arizona has a weakness, it’s in the half court. The Wildcats have shot-makers — notably Johnson and newly minted starting guard Gabe York — but lack creators. Even against Gonzaga, it was noticeable how their offense could stall before relying on a late-in-the-shot-clock heave from one of their three guards. Thankfully, Hollis-Jefferson was around to absolutely bully Gonzaga in the paint whenever the Wildcats found themselves grinding away for points.

The Sweet 16 will be a challenge not only because San Diego State is a better team than the Zags, but because the turnovers and easy trips down the floor should be harder to come by. The Aztecs’ 9.9 turnovers per game is the 14th-best mark in the country, and the third-best of any team left in the tournament. They also boast one of the better defenses in the nation. It’s the type of team that could give Arizona trouble, which it already has earlier this year, when the teams met in San Diego in November. Arizona walked away with a nine-point win, but its lead had shrunk to four with just less than two minutes left in the game.

It all means there’s a good chance the Arizona team we saw Sunday isn’t the one we’ll see Thursday, but it’s frightening enough knowing that team is always lurking. The tournament is a place where being good enough often enough is more valuable than being great once in a while, but Few was right — it’s hard to imagine a team better than the one he played this weekend.