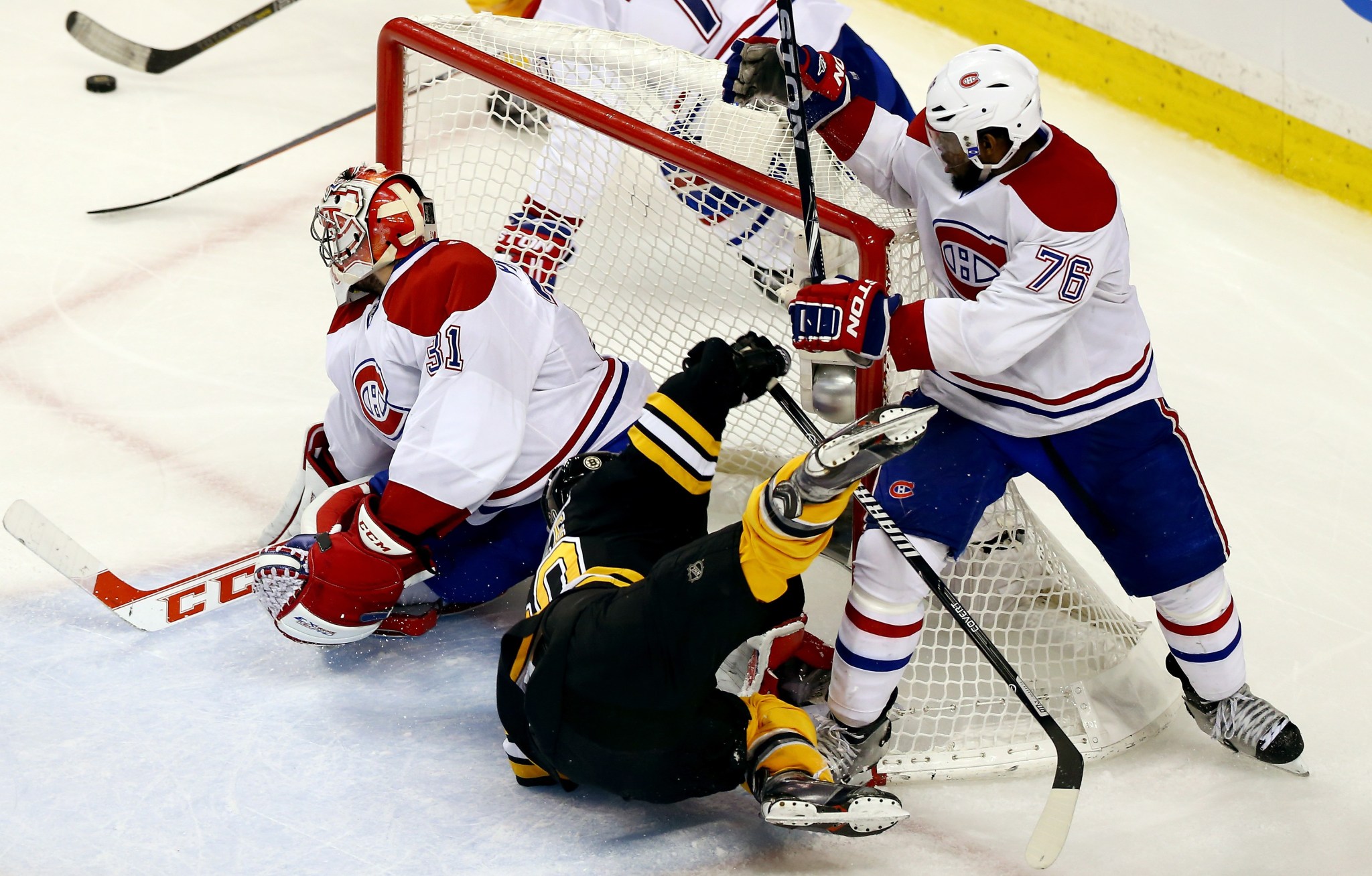 In case you were busy telling James Dolan that it’s not him, it’s the Straight Shot, here are the six biggest stories you missed in sports last night:

Goalkeeper Carey Price and the Montreal Canadiens, Canada’s lone representatives in the NHL playoffs, advanced to the Eastern Conference finals after beating the Boston Bruins 3-1. “Ehhhh, crap, fine,” said every Canadian from outside of Quebec when they realized they probably had to root for the Habs in the Eastern Conference finals against the New York Rangers. Every Canadian then asked their neighbor, “Do you know any sports other than hockey we can try? I’ve heard good things about cricket? Do you know anything about cricket?” but received no response because they were all talking at the same time.

In the Kings of the southland:

Jonathan Quick did just enough to make his team’s early two-goal lead stand up as the Los Angeles Kings beat Anaheim 2-1 to force a Game 7 in their Western Conference semifinals matchup. “Nope, they’ve gotta come down to Anaheim,” said Ducks captain Ryan Getzlaf, when asked if he was worried about the Kings in a Game 7. “And I dare them to try to shoot down the 5. Ain’t gonna happen. So what? The 60 to the 57? Ha! Those guys will probably have to shoot down the 605 and then cut over on the 91 or maybe just take Katella all the way? Or even the 22? What I’m saying is, we expect a forfeit.”

In the end is the beginning is the end:

The Miami Heat came from behind to eliminate the Brooklyn Nets from the playoffs with a 96-94 win, while the San Antonio Spurs faced a less stiff challenge, dispatching the Portland Trail Blazers with ease in a 104-82 win. As Gregg Popovich’s white and silver jungle of the mind closed in on Portland, Blazers point guard Damian Lillard whispered to teammate LaMarcus Aldridge, “Weren’t the good guys supposed to win at the end of this?” Aldridge shook his head. He was hungry, and the very notion of victory eluded his brain. All he could say was, “I don’t think there are good guys. When we win, are we the good guys? Bombing in midrange jumpers, sticking 3-point daggers into the heart of our enemy? Is that any better than the vice grip we’re currently being held in? Is it, Dame? Is it?” But Dame didn’t answer, as while Aldridge was speaking, Tim Duncan banked another shot from the block in over the Blazers forward. There are only two ways home from San Antonio: death or victory. And death was all around the Portland Trail Blazers.

In the NIT of Europe:

Sevilla beat Benfica on penalty kicks after playing 120 scoreless minutes to take the Europa League trophy back to Spain. Hopefully, the trophy will be treated better than it has been over the last year, during which it was kept in the locker of Chelsea striker Fernando Torres as part of a mind game orchestrated by manager Jose Mourinho to further break the will of his troubled striker.

Masahiro Tanaka threw his first complete game shutout for the Yankees, as they won their intra-city showdown with the Mets 4-0. Unfortunately for Tanaka, he’s slated to pitch again tomorrow, and the next day, and every day for the foreseeable future, as the Yankees’ other healthy starting pitchers are someone named Chase Whitley and the ghost of Lefty Gomez.

In decisions that seem obvious in retrospect:

Steve Kerr spurned the advances of the New York Knicks, and instead accepted the head coaching position with the Golden State Warriors. When asked why he chose to coach a team featuring excellent shooters Steph Curry and Klay Thompson, a world-class defender in Andre Iguodala, a passionate yet forgiving fan base, and an owner who isn’t James Dolan, the interviewer withdrew the question before Kerr had a chance to say, “Come on, man.”