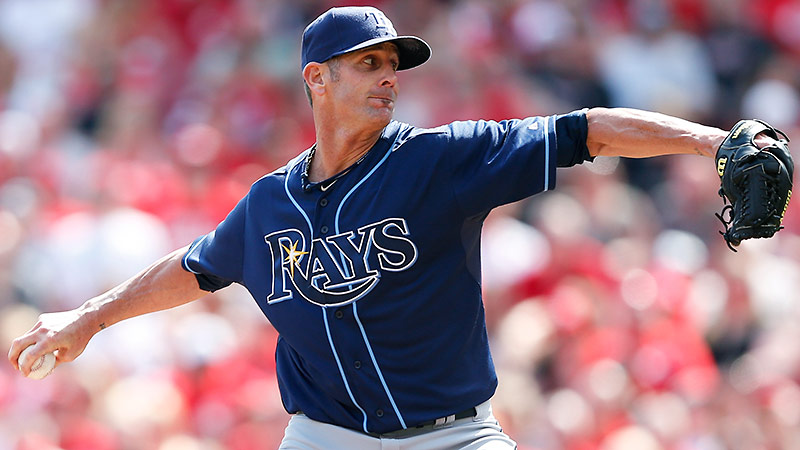 The first two innings of Tampa Bay’s 12-5 blowout loss Monday night in Seattle rank among the ugliest any team has turned in this season.

Seattle’s first four hitters all reached, battering Cesar Ramos for two doubles, two singles, and three runs. Things got even worse in the second, when Mike Zunino opened with a home run and the next two batters reached on errors, one on an errant throw from Ramos, the other on an uncharacteristically lousy play from Gold Glove third baseman Evan Longoria. The rest of the inning completed the house of horrors effect: an RBI double, a sac fly, a walk, a hard lineout to right, an RBI single, and then the capper, another run-scoring error, this time by normally sure-handed first baseman James Loney.

Eight runs allowed on eight hits, two walks, and three errors in 1⅔ innings, against a middle-of-the-road offense and in a pitcher-friendly ballpark. This wasn’t a Tampa Bay Rays game; it was a pre-2008 Devil Rays game.

The loss dropped the Rays to 16-23, the first time they’d fallen seven games under .500 since starting the 2011 season at 1-8. After the game, the talk centered on Ramos’s gutty effort, and how the lefty shook off his abysmal start to toss a career-high 6⅔ innings and 114 pitches. It was uncharacteristic spin from a team that’s grown to pride itself on airtight pitching and defense, and that won more games from 2008 through 2013 than any franchise other than the Yankees.

When the Rays rebounded on Tuesday night to notch a 2-1 win behind David Price’s glowing 12-strikeout performance, it felt less like a return to normal and more like a rare breath of fresh air in an otherwise stinky season:

Of course, it wasn’t supposed to be this way. The Rays made the playoffs four times during that aforementioned dominant six-year run, and they won 90 or more games five times in that stretch. They took two AL East crowns from the perennially terrifying Yankees and Red Sox despite payrolls one-third, one-quarter, or even one-fifth (in 2011) the size of the spend-to-the-moon Bronx Bombers.

This offseason, the Rays even engaged in a veritable spending orgy by their standards. They avoided arbitration with staff ace Price by paying him the highest single-season salary in club history, at $14 million. They signed closer Grant Balfour to a two-year, $12 million deal, the most they’ve ever spent on a ninth-inning specialist. They handed another two-year deal to 34-year-old platoon outfielder David DeJesus. They rewarded Loney with a three-year, $21 million deal after he rewarded their $2 million trip to the bargain bin in 2013 with a .299/.348/.430 campaign. They gave another three-year contract to Ryan Hanigan, a 33-year-old catcher coming off a season in which he hit .198 and slugged .261. They even invested $5.5 million in Heath Bell, a pitcher so terrifying he has his own derogatory hashtag.

All told, the Rays opened the season with a $76.9 million payroll, a 24 percent jump from last year’s total and the seventh-biggest increase in the majors. With the Red Sox waving good-bye to Jacoby Ellsbury and Stephen Drew, the Yankees dealing with many roster holes despite a massive spending spree, and the Orioles and Jays entering the season with decent but flawed rosters, it looked like the (relatively) well-compensated Rays would have a golden opportunity to reclaim the AL East. Instead, they’ve taken up residence in the cellar.

This is the part where I’d normally regale you with 47 charts, graphs, and heat maps to explain the incredible intricacies of a disappointing season. In this case, though, it really comes down to pitching. The Rays’ offense has actually been pretty good overall after adjusting for the dampening environment of Tropicana Field, but injuries have decimated the rotation and created a trickle-down effect that’s burdened the bullpen. It started when the team placed promising young right-hander Jeremy Hellickson on the disabled list to open the season, then continued when the Rays lost talented left-hander Matt Moore to Tommy John surgery just a few weeks later. Five days after Moore hit the shelf, the Rays lost Alex Cobb to an oblique strain. Just like that, a team that was supposed to be built around strong starting pitching had lost three-fifths of its projected rotation.

That would be a crippling blow for any team, but it was an absolute shocker in this case given the Rays’ pristine track record of pitcher health. As I discussed in the above linked piece on Moore, the Rays had only one pitcher in the entire organization go under the knife for Tommy John surgery from late 2005 to mid-2009. From May 2008 to August 2010, only one of Tampa Bay’s big league starters spent a single day on the disabled list … and that was Scott Kazmir, whom the Rays flipped for Sean Rodriguez and Alex Torres right before his bottom dropped out. (Kazmir needed four years to return to form, but his revival has been one of baseball’s best stories of the past couple years.)

Even though the Rays hadn’t dealt with pitching injuries in the past, they were theoretically well positioned to do so, as their excellent depth was one of the secrets to their success during their six-year run. If the Rays couldn’t outspend the Yanks and Sox for marquee talent, they could at least ensure that their fifth starter, last man off the bench, and last couple guys out of the bullpen provided real value. This model of roster building proved so successful that Red Sox GM Ben Cherington followed the Rays’ (and A’s) example this offseason despite having gobs of money at his disposal.

The Rays called on that depth right away this year, tabbing promising rookie right-hander Jake Odorizzi to step in for Hellickson. GM Andrew Friedman & Co. knew that Odorizzi would have his good games and bad, and that he might tax the bullpen with some short outings while getting acclimated to starting in the majors. But once Moore and Cobb went down, too, those calculations shifted. Instead of having to worry about only Odorizzi, they suddenly had to worry about converted swingman Ramos and shaky veteran Erik Bedard also burdening the pen.

The results haven’t been pretty, as Rays starters have thrown five innings or fewer in 20 of the team’s 40 games, the worst mark in the American League. Unsurprisingly, that failure to go deep into games has taken its toll on the bullpen, as Rays relievers had thrown more innings than any other AL team entering Tuesday’s game. That kind of overuse tends to spark lousy performances, and it has: Tampa Bay has the worst junior circuit numbers on a park-adjusted basis.

Balfour, fresh off that two-year deal, owns a 5.02 ERA and has looked even worse than that, walking more batters than he’s struck out. Young right-hander Brandon Gomes has been awful, watching his strikeout rate fall to 15 percent from 35 last year; in advanced-stats terms, he’s been a serial server of meatballs. Bell was so bad the Rays cut him loose, eating the $4.5 million or so they had left to pay him, which is no small thing for a team near the bottom of the league in payroll every year. Josh Lueke has been terrible, though outsiders are probably too busy wondering why the Rays are rostering this guy in the first place to worry about his stats.

If there’s a poster boy for the Rays’ frustrating season, though, it might be Joel Peralta, owner of a 6.60 ERA. A bullpen lion in a league full of hyenas, Peralta relied almost exclusively on guile and veteran craftiness to become one of the steadiest setup men in the league over the past three years. He owes much of his success to his ability to pitch backward, throwing breaking balls and off-speed offerings in fastball counts. But no pitcher can get by on junk alone, and Peralta knew how to get the most out of his 90-mph heater: He held opposing hitters to a microscopic .114 batting average with that pitch last year while getting them to whiff on it 25 percent of the time. This year they’re hitting .364 off his fastball and swinging and missing just 15 percent of the time. The truly killer stat, though, is his home run rate on fastballs. Last year he gave up just three homers on 485 heaters; this year, he’s already surrendered three on just 99. That long-ball vulnerability has been a bullpenwide disease, with Peralta, Gomes, Lueke, and Balfour combining to serve up 15 homers in 71⅔ innings.

The silver lining for the Rays is that this might be the weakest AL East in years, and possibly decades. Four of the five teams are carrying negative run differentials at the point in the year when we should start taking that stat more seriously, and Toronto, the only team to score more runs than it’s allowed, carries plenty of questions in the rotation despite fielding an offense that can mash. Thanks to that divisionwide mediocrity, the Rays are in last place, but only 4½ games out of first.

The larger dark cloud around that silver lining is the question of whether the Rays can realistically expect to improve enough to again become legitimate contenders this year. They’re hoping Cobb can return by the end of next week, which would provide a lift to both the rotation and, correspondingly, the bullpen. Hellickson should return in late June. There’s a little bit of depth left in the minors, with hard-throwing lefty Enny Romero looking like the farmhand most likely to make an impact this year. Getting Cobb and Hellickson back could push Ramos to the bullpen, where he (and potentially Romero) could prove to be an asset.

Still, the bigger picture points to a team that’s seen its pipeline of impact prospects just about dry up. We won’t see another call-up like Wil Myers or Chris Archer or Desmond Jennings this year. Barring an impact trade, the Rays will probably have to do battle with the players they’ve already got.

Given how little bait the Rays have left to offer after a series of weak drafts, an impact trade is probably unlikely. There is one alternative to dealing prospects, of course: The Rays could make Price one of the best pieces of deadline bait any team has offered in years. Coming in to Tuesday’s game, Price had posted a 5.63 ERA in his previous five starts, with opponents batting .311 and hitting seven homers in 32 innings. Then he went out and destroyed the Mariners with the kind of performance that would make any pitching-hungry contender drool, striking out 12 batters and walking none en route to a complete-game win. Since coming off the DL last year, Price has struck out 172 batters and walked just 19 in 27 games. The Rays could even up the ante if they wanted, putting jack-of-all-trades Ben Zobrist, soon to be 33, up for bid. Given the Rays’ burning need to restock their young talent pool and set up more thrilling late-season moments in 2015 and beyond, those options might be hard to resist if they fail to move up the standings.

We’ll know soon enough. Credit Joe Maddon for trying everything imaginable to keep his team loose and spirits high as the Rays try to survive this horrific start. As fun as bell-bottoms and Aqua Velva might be, though, the Rays need something else, namely the kind of pitching that’s fueled their success for the past six years. Mediocre division or not, they need it bad. And they need it fast.