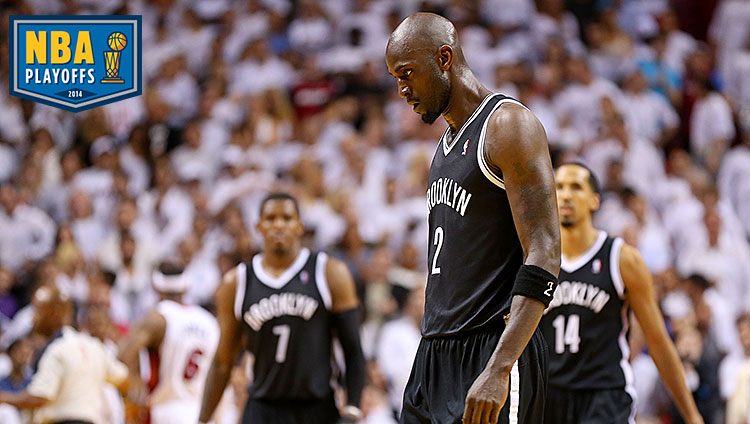 netw3rk: Joe Johnson — as you may have heard and have probably joked — is quite well compensated, even within the heady ranks of professional basketball players. It’s weird to be thinking it’s a shame someone is overpaid — especially when the the figures being tossed around feature roughly the same number of commas as a James Joyce sentence, and aren’t coming out of your own checking account — but, you know, it is kind of a shame Joe Johnson is overpaid. If only because Joe Johnson is actually a good basketball player, nearly as underrated as he is overcompensated, who will forever be shooting fadeaway jumpers in the looming shadow of his planetoid-size paychecks. That he now plays for Russian mining billionaire Mikhail Prokhorov’s rare collection of vintage Eastern Conference All-Star action figures only compounds the issue.

The Nets were eliminated by the Heat last night in Game 5, a game I think could be fairly described as Joe Johnson’s Viking funeral. Joe went for 34 points and seven rebounds, and near-single-handedly kept the Nets alive by going 10-of-13 in the second half, most of those plays of the physically bruising/high degree of difficulty/ISO Joe variety. Joe’s conflagration was, by that point, threatening to unduly extend the series, so Coach Spo sicced LeBron on him. Joe simply banged with the King to create the space he needed to cooly splash jumpers over him.

In the end, it wasn’t enough, of course. But that’s the story of Joe Johnson: When you’re the fourth-highest-paid player in the NBA, nothing ever will be.

One for the Road

A Glimpse of Light

Danny Chau: Kawhi Leonard sat down for his first press-conference interview of these playoffs looking like his dog had just died, in a sweater that was edge-of-the-universe black. Then, all of a sudden, before the first question was even asked, he flashed a wide smile — but there was no light capable of escaping the black hole that was that sweater. A reporter asked how it felt to be up there. “I don’t feel no certain way about it,” Leonard said. “Tim chose me to come up here.” He let out a little laugh under his breath that lasted about a beat and a half, but no longer. His face started contorting rapidly as it recalibrated back to its normal, joyless expression. Watching Leonard talk up there was its own sport, like watching Lyoto Machida fight in the octagon: He’s so reserved and unenthusiastic that when he flashes any bit of personality, it’s almost too much to take in.

Kawhi was up there for a reason. With Tony Parker leaving early in the game due to a hamstring issue, Leonard took it upon himself to bring his team to the conference finals. He finished with 22 points, seven rebounds, two assists, and five steals. He played with his trademark calm, but uncommon flourish. After stealing the ball with 10:37 remaining in the third quarter, he squeezed between Damian Lillard and Wes Matthews — the Blazers’ only line of defense — and garnished his dunk with a slight pump just before slamming it home.

A minute later, Leonard pushed the ball upcourt himself, and hit Lillard with a left-to-right, right-to-left, hesitation crossover, before throwing a no-look, two-handed pass in midair to a wide (and open) Boris Diaw. It was a move the Spurs organization had foreseen. The play had its roots in the summer of 2012, when Leonard was asked to run the Spurs’ offense at the Las Vegas Summer League for several games after spending time practicing with Team USA. He was only weeks removed from his first Western Conference finals appearance then. He’s about to play in his third in the same number of years. Yeah, it’s a lot to process. Take your time — thanks to the Spurs’ gentleman’s sweep, you have plenty.