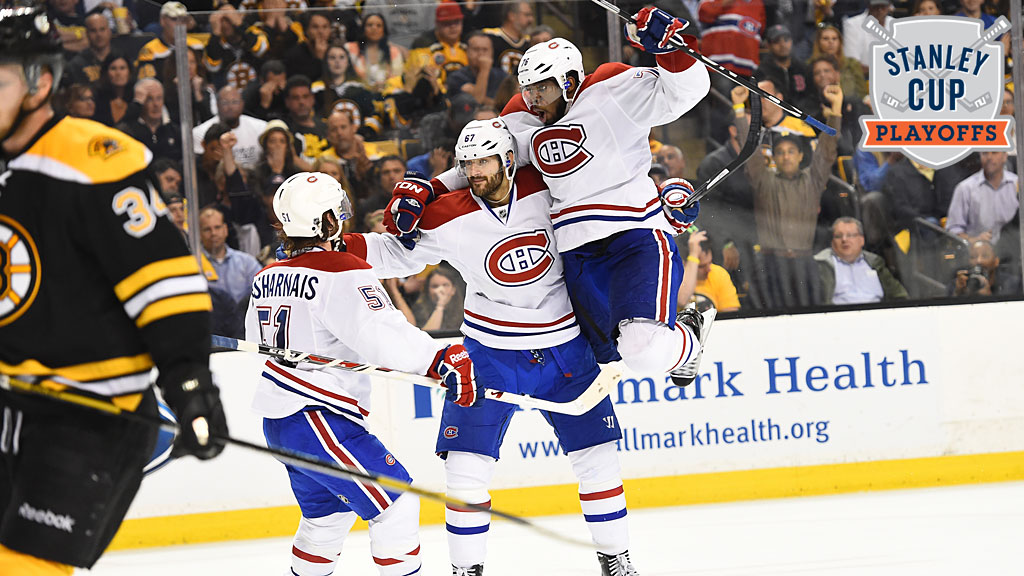 Swept up in the exuberance of a new lifetime high in his young and promising athletic career, the joyful athlete took another man’s head in his hands, as the TV cameras rolled, and planted a big, happy kiss right on his face.

It was a spontaneous and beautiful moment. And when it was over, P.K. Subban — still in his hockey pads after Wednesday night’s Game 7 win over the Boston Bruins — smiled at NBC’s Pierre McGuire and then bounded away down the TD Garden halls. A few days ago, after the Montreal Canadiens won Game 6 at home, Subban had envisioned this moment. “It’s going to be great,” he said. “I can’t wait for the [Boston] crowd, the noise, the energy in the building. I can’t wait to take that all away from them.”

Subban is a magnetic force, irresistible and polarizing. The puck is drawn to him. He repels criticism. He is the person parents wants their children to become: someone boldly assured of his or her place in the world, impervious to idle threats. In the first game of the series, he scored twice, including in overtime, to beat the Bruins. Boston fans took to Twitter to register their frustration, a fraction of them doing so in gross, racist ways. It was an embarrassing episode for everyone involved — except Subban, whose comments on the matter were as thoughtful as they were above it all.

As the back-and-forth series went on, Subban remained at the center of it all. In Game 3, he scored a rocket of a goal and added an assist. In Game 5, he got embroiled in a conversation with Milan Lucic that culminated with Lucic flexing his biceps. The Bruins handily beat the Habs that night, but Subban scored a goal that distilled so much about him into one sequence: He shot and missed; he jumped up and down like a tired child, screaming to get the puck back; and when it came to him, he got down on one knee and made sure he didn’t miss again.

There was more: As the game’s final minute ticked down, he skated by the Bruins’ bench, where Shawn Thornton squirted him in the face with water. He played more than 24 minutes in Game 6 and 26 in Game 7, in which the Canadiens scored early on the Bruins and got a fantastic performance from Carey Price for the 3-1 win. (Price has now allowed just two goals in the last five elimination games he’s played: three Olympic contests en route to the gold medal, and Games 6 and 7 against Boston.)

It was, as Subban proudly pointed out to McGuire after the game, his fourth Game 7: His record in the decisive contest is now 3-1. He bragged about the playoff atmosphere in Montreal (I have to admit that, just from watching on TV, I can’t get that damn goal song out of my head) and expressed worry on behalf of the team’s next opponent, the New York Rangers. The one thing he didn’t wish to speak to was what went down in the handshake line after the game, when Milan Lucic gave Dale Weise and Alexei Emelin a glad-hand that could separate a shoulder and reportedly told them both that he would effing kill them next year.

As @aaronward_nhl said, Milan Lucic to Dale Weise in the handshake line: “I’m going to fucking kill you next year.”

The drama between Lucic and Weise had been unfolding all series — first Weise mocked a goal celebration by Lucic; later he mimicked the curled biceps; in Game 7, he scored the game’s first goal — but as NBC Sports analyst Keith Jones said, Lucic wasn’t exactly striking fear into anyone by having a tantrum following a loss. “The Canadiens are chuckling all the way home,” he said.

Subban is probably laughing loudest, because that’s what he always does. It’s a personality trait that gets him into trouble sometimes, often disproportionately and unfairly. (Never forget that the celebratory postgame triple low-five that he and Price used to do got banned by the team. Never forget.) It’s hard not to shake your head with disbelief when you think about how he was nearly left off the Canadian Olympic team, despite winning the Norris Trophy last season. Or when you consider that the Montreal Canadiens, with the chance to lock Subban up to a long-term contract in 2012, weren’t willing to open the coffers and instead settled on a two-year bridge contract that is up after this season, making Subban a restricted free agent. At the time, he was characteristically forthright about the negotiations.

“For my style of game and for what I do for the team, the amount of minutes I play and for what I bring to the table, I have to be fairly compensated,” he said. “We’re not trying to rob the bank here. We’re not reinventing anything. We’re not holding a gun to the Canadiens’ head saying, ‘Pay us this or we’re walking away.'”

There has been some criticism that the Canadiens need to maybe act like they’ve been there before — which they actually have, appearing in the Eastern Conference finals in 2010 — given their outward excitement at knocking off Boston. After all, the Rangers lie in wait.

But people said the same thing after Game 6, when Subban made his comments, and we saw what happened in Game 7. The mystique of the Montreal Canadiens can grate on people sometimes, and Subban manages to subvert it while paying due respect. As he showed Pierre McGuire on Wednesday night, after all, there is plenty of room in his embrace.