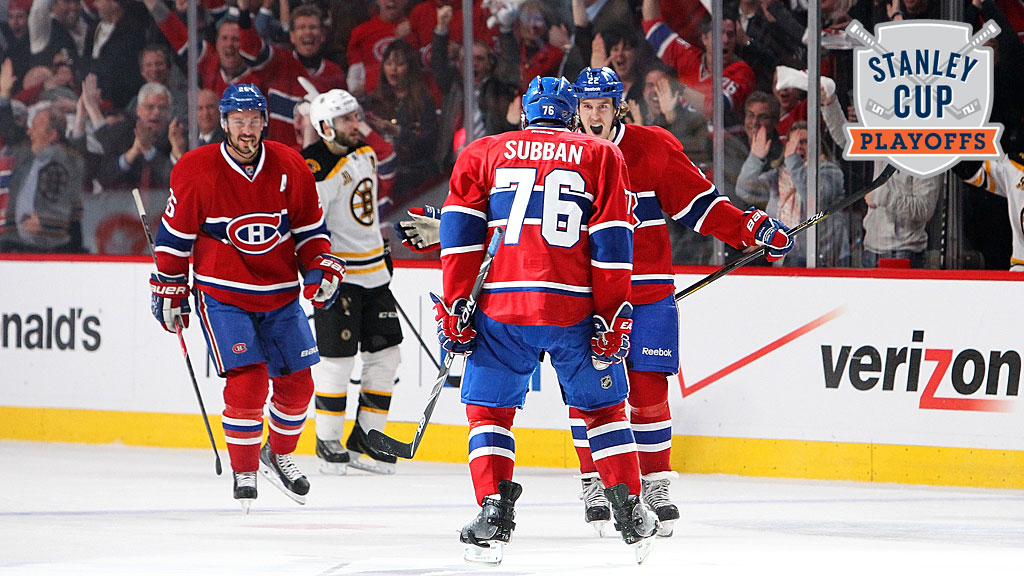 Montreal’s second-round matchup against Boston moved to the Bell Centre on Tuesday night, as the Habs beat the Bruins 4-2 to take a 2-1 series lead. It was all very exciting! I guess that’s a thing you should expect, though, if fire is an integral part of the home team’s pregame routine. If you missed Game 3, no sweat. Here are five of the best moments.

5. Ginette Reno sings the Canadian national anthem, receives super healthy jolt of adrenaline (or something?), which is totally fine because a real-life doctor said so.

If you are not an NHL fan, you might not be familiar with one of the worst debates in hockey: which team has the best pregame anthem singer. It’s usually Team Rene vs. Team Jim, but can we throw Ginette, who continues to belt out O, Canada after suffering a heart attack earlier this year, into the conversation too?

“She came into my office and I knew she had the question, could she sing, could she not sing,” her cardiologist, Dr. Jean-Lucien Rouleau, said. “Ginette, I have a prescription for you, and that is to sing the National Anthem before the beginning of each Canadiens match, certainly against the Bruins but especially after that when we go [to] the finals for the Stanley Cup.”

Uhhh … This all seems highly suspicious and not exactly heavy on the science, but then again, this guy’s name is Dr. Jean-Lucien Rouleau, which is extremely professional-sounding, so who am I to argue?

OK, so, this clip of Reno is actually from late April. But you get the gist. To make up for it, here’s a video of her fist bump-handshake with Montreal captain Brian Gionta last night.

“We’re not like the rest of those scugs in the other sports. We look good,” says Don Cherry, dressed like this: pic.twitter.com/CYXbTEulAD

Weise, whose overtime goal helped lift Montreal to a Game 1 win over Tampa Bay in the first round, crushed it again Tuesday night. Look at how happy he is.

2. Meanwhile, in the Midwest …

David Backes plays for the St. Louis Blues, so technically this doesn’t really count, but it was happening at the same time as Boston-Montreal. I put this tweet in here as a lesson to hockey players. See what happens to you when you get eliminated early, guys. You spend your nights figuring out government bureaucracy, that’s what happens.

P.K. Subban wore his killer fedora on Tuesday. P.K. Subban had a nice assist on this Tomas Plekanec goal. At one point in the game, P.K. Subban got mad and took out his rage on a poor water bottle, which, whatever. P.K. Subban can do what he wants. Seriously, remember when P.K. Subban did the weather? He’s my second-favorite TV weatherman and that’s only because my uncle Chuck is an actual TV weatherman. Anyway, P.K. Subban scored this goal and everyone in the hockey universe (well, OK, a lot of us) danced in their living rooms, because, come on, P.K. Subban.

He is the very best.

On the Brink of Survival, Remembering Sunderland's Heartbreaking Relegations

The Mock Draft Is a Force That Gives Us Meaning