The Mock Draft Is a Force That Gives Us Meaning 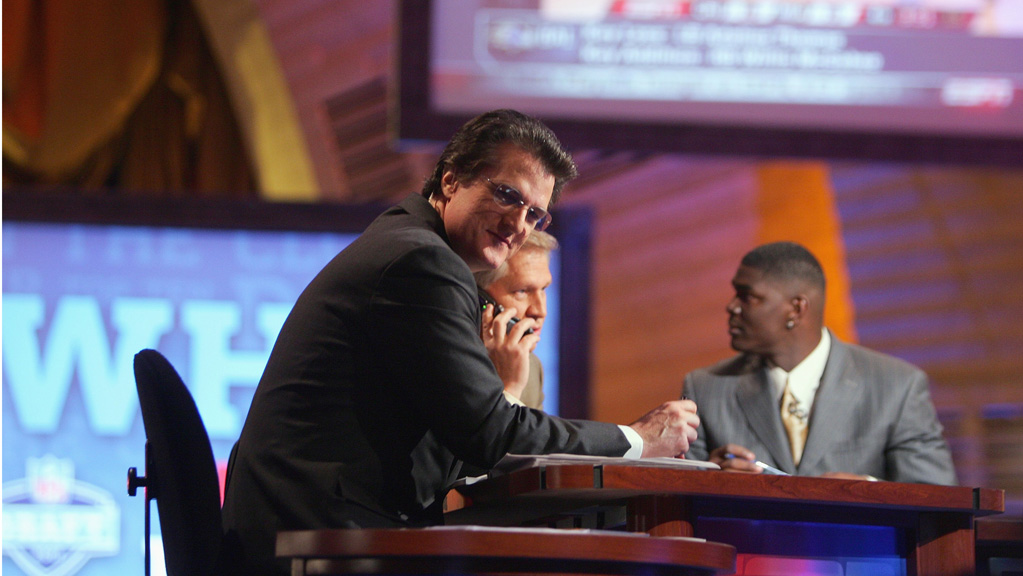 Do you remember your first time? I do. It was a warm spring night and I was 14 years old. Wait, we’re talking about our first mock drafts, right?

Don’t harsh my reverie. I was the ideal age: old enough to be able to afford Mel Kiper’s royal blue book and young enough to have no demands on my time whatsoever. As I recall, a friend and I got sheets of notebook paper and pencils and began slotting picks. We guarded our mock drafts closely — no lookin’! — and argued about whether the Arizona State cornerback we were installing at the end of the first round was “Felipe” or “Phillippi” Sparks. We made picks for each team. We exchanged mock drafts. And that was the end of the drama, because my pal and I realized all we’d done was plagiarize the work of real NFL reporters, move half-familiar college players up and down our “boards,” and create a simulacrum that bore as much resemblance to the actual draft as battles in Magic: The Gathering did to fights at school. A week later, Phillippi Sparks went in the second round.

So why mock drafts? What’s the appeal? I was thinking about this the other day as I checked to see whether Aaron Donald would be on the board for the Cowboys.

The first mock drafts were probably performed in the 1970s by NFL teams. They were live-fire simulations: war games for the front office. Within a few years, the mock draft became a work product of the first wave of draft experts — ESPN’s Kiper, the Phantom of the Opera–like Joel Buchsbaum — who were shadow player personnel directors in the way sabermetricians would soon become de facto general managers.

By the mid-1980s, mock drafts were common enough in the sports pages that NFL writers were trying to distinguish themselves. “This isn’t your typical mock draft,” the Los Angeles Times bragged in 1985. Some gloated about their soothsaying powers: “Boston Globe sportswriter Will McDonough was on target with his NFL mock draft. He correctly predicted 26 of the 28 players who were taken in the first round …”

By the first Bush administration, so many writers were producing mock drafts that something funny happened. The simulations of the draft — the idea, say, that North Carolina’s Eric Ebron will come off the board after pick no. 5 but before pick no. 15 — formed into a kind of simulation of truth. What writers thought would happen became the yardstick writers, even teams, used to measure what did happen. In 1989, the Raiders were delighted to acquire Steve Wisniewski in the second round because, as the Los Angeles Times noted, Wisniewski was a “projected first rounder in several mock drafts.”

In retrospect, it was a remarkable moment. A sports simulation had gotten so fun that it began to overtake actual sports, kind of like the time Brandon Stokley executed a move out of Madden during a Broncos game. Forget that it was already a stretch to put the real draft on TV. Now the mock draft was an event in and of itself.

The gold standard of mock drafts in those days was the final one supplied by Rick Gosselin of the Dallas Morning News. (“I was like a consensus draft board,” Gosselin said recently.) But Gosselin’s column was about inside dope — figuring out who’d go where. These days, a mock draft needs only a tenuous connection to the real thing. Last Thursday night, Kiper and Todd McShay met on ESPN2 for a kind of mock-draft rap battle. McShay took the first pick, Kiper the next. They argued back and forth about whose hypothetical picks were more accurate — that is, who had mastered the self-contained universe of the mock draft. The actual results wouldn’t be available for another week.

You don’t need to be Mel or Todd to perform a mock draft. Now, we all put pencil to paper. A draft-mad lawyer pal of mine came into my office the other day and urgently pointed me to a site called Fanspeak. Founded by a brother-sister team called the Shoups, Fanspeak offers a “live” mock draft to anyone who wants it. I chose to draft as my team, the Cowboys, who are picking 16th in the first round. The mock draft began. Simulated “picks” scrolled down the screen: Jadeveon Clowney and Greg Robinson and Aaron Donald (damn!) … Then the site said, “You’re on the clock!”

Working in the noble tradition of the mock draft saboteurs, I drafted Johnny Manziel. Fanspeak simulated the rest of the first round and the top of the second until it was my turn again. I took Texas Tech’s Jace Amaro, because the Cowboys always waste a second-rounder on a tight end. In the third, I took Louisville’s Marcus Smith. In the fourth, I found myself staring at a list of college players I’d never heard of and nuked the browser tab.

A few days later, my lawyer pal walked into my office again and told me about another mock draft — the Jadeveon Clowney and Khalil Mack of mock drafts, a once-in-a-generation mock draft. SI.com was asking fans to make picks by voting on Twitter. Which is common enough — in the old days, it was done by remote beat writers on sports radio shows. But the joy was in the fine print. “Tired of picking through all of the NFL experts’ mock drafts?” SI.com asked. “Well, now you get your chance to get in on the action.”

In other words, it was a mock draft for people tired of mock drafts. The fans, for pick no. 2, took Clemson’s Sammy Watkins for the Rams. “Two picks in and we already have our first minor surprise,” SI’s Chris Burke remarked. Now, was that a Steve Wisniewski kind of surprise — one in which the actual event didn’t live up to the simulation? Or was it, as I suspect, a Matrix kind of surprise, in which a simulation becomes nestled within another simulation — in other words, a whole different order of mindfuck?

The mock draft is a force that gives us meaning. There are a couple of good reasons for this. One, it’s an ingenious time-filler for NFL reporters. There’s not much news to report about the draft, and a lot of the dope supplied by team sources is just misdirection. So a reporter unveils one mock draft, then changes it slightly and unveils another. One prospect “slips” while another “rises up the board.” When Roger Goodell pushed the draft from April to May, mock drafts multiplied to fill the dead air. If you’re a full-time draft writer, you can maintain the exercise all year.

The mock draft puts fans in the war room. It’s an offshoot of what Neal Pollack once called the cult of the general manager. At some point, post-Moneyball, we stopped dreaming of being Josh Donaldson and started dreaming of being Billy Beane. Or, in NFL draft terms, Les Snead > Robert Quinn.

That dream, in turn, is fed by the explosion of information now available about NFL prospects. In the Phillippi Sparks era, reporters were barred from the NFL combine. Now anyone can watch the combine on the NFL Network, Jon Gruden’s QB Camp, Teddy Bridgewater’s (allegedly) disastrous pro day, and more live college games than ever before. We might even hear the shameful questions about whether a prospect’s mom was a prostitute. The accumulated knowledge gives our mock drafts the ring of truth. Maybe Bridgewater really is tumbling down the first round just as Fresno State’s Derek Carr is scaling it. Maybe.

But the most appealing thing about a mock draft is simpler than all that. As it turns out, a mock draft is more exciting than the actual draft. (The revelation is similar to the one that fantasy baseball often beats real baseball.) A mock draft offers us infinite possibilities. Take the Cowboys. I found mock drafts that have them ending up with Aaron Donald, Anthony Barr, and Timmy Jernigan. Those “picks” incite a whole flood of further hypotheticals. Whether Donald will slide to no. 16. Whether Barr, a former running back, has fully converted to linebacker, much less defensive end. Whether the Cowboys will trade up for Manziel and we fans will all start carrying printouts of this in our wallets: 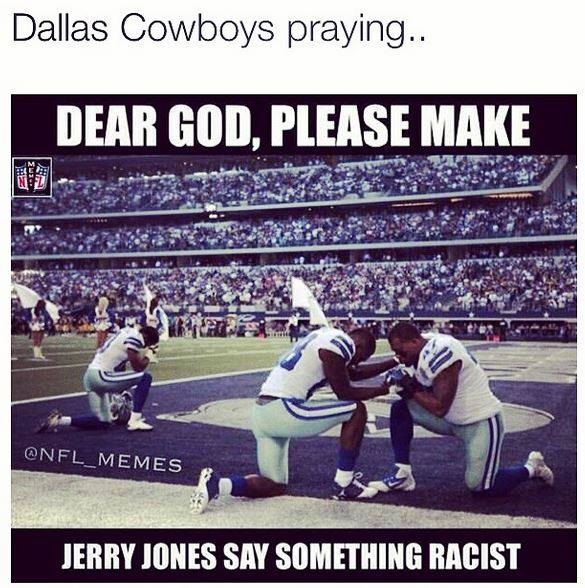 The actual draft? You wind up with one prospect. And he may be Travis Frederick. Or, worse, Mo Claiborne. A mock draft is a fantasy; the real draft is earthy reality — boring, awkward, unsatisfying. To rejoin the cheap joke that opened the column, you lay back and think, Gee, was that all there is to it?