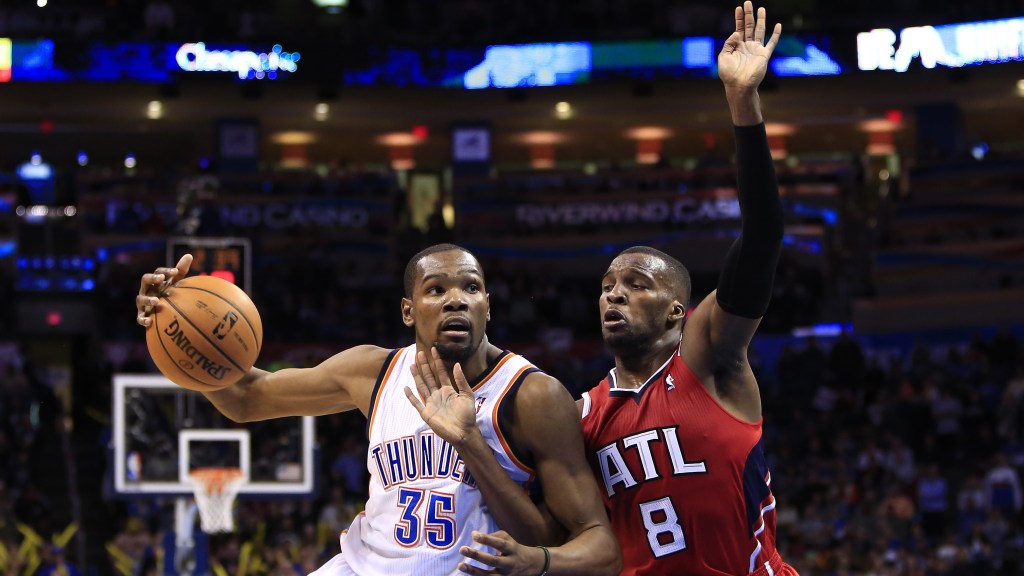 In case you were busy enjoying a piping-hot Papa John’s pizza, here’s what you missed in sports on Monday:

In advance of the big game, all week long we’ll be handing over About Last Night to the stars of Super Bowl XLVIII. Today: Denver Broncos quarterback Peyton Manning.

• Hello, Grantland. I’m Peyton Manning, currently in beautiful New Jersey. This truly is Eli’s country. Ah, it’s always fun to pick on Eli, and I’m pretty excited to give this old insult-comedy gig a whirl. That’s what this is, right? Insult comedy? I hope so. Let’s go. How about that Kevin Durant, huh? Leading his Oklahoma City Thunder to a 111-109 win over the Atlanta Hawks and recording his 11th straight 30-point game. Man, that’s gotta be some kind of record. Oh, it isn’t? Then Peyton Manning doesn’t care. Manning Slam.

• The Los Angeles Kings snapped their five-game losing skid with a gritty 1-0 win over the San Jose Sharks. Well, gritty is one word for it. Boring is another. Hey, L.A., I’m in New Jersey, and I think you’re overusing the trap. Oh, Los Angeles Kings — it looks like I just Manning Checked you.

• Jabari Parker had 21 points as Duke beat Pittsburgh, 80-65. Not very sporting of Duke to take down the Eli Manning of Pennsylvania cities like that. Wow, that was too easy — let’s get up to the line and go for two: No, but seriously, I haven’t seen a freshman light up a team from a state’s second-best city like that since UT beat Vandy 65-0 when a little guy named Peyton Manning was their quarterback. Throwback Manning Slammed!

• The surprising Toronto Raptors moved two games over .500 as they beat the Brooklyn Nets 104-103. You know what else is surprising. You know what else? Huh? Um … oh man, come on, guys. TIMEOUT! I can’t believe I had to burn that there. Damn, we gotta punt this thing. Something, something, Rob Ford in a Broncos jersey.

• A billboard in Houston is apparently asking the Texans to draft Johnny Manziel with the top overall pick in the draft. Man, that would be the worst first overall pick to happen to the Texans franchise since I went to the Colts. And they weren’t even a franchise yet. Oh, hey there, Houston: You just got Manning Slammed. No, it’s still David Carr. Double Manning slammed! But seriously, it was me. Omaha’d!

• Staying on the topic of the franchise I personally crippled for the better part of a decade: Former Texans head coach Gary Kubiak is heading to the Ravens to take over as their new offensive coordinator now that my former head coach Jim Caldwell has moved to Detroit. Now I know people out here in the blogdome like to say Jim Caldwell isn’t much of a head coach, but I worked with the guy day in and day out, and I’ll tell you, I’ve never known a better leader or football mind in all my days in the game. Seriously, there is no one better equipped to single-handedly run a professional football franchise. Nah, I’m just kidding, he’s terrible. Reverse Manning Slammed!

• Ryan Spangler had 15 points and 17 rebounds as Oklahoma beat the heck out of Marcus Smart and Oklahoma State in their Bedlam matchup, 88-76. Hey, Oklahoma State, looks like Spangler had you seeing stars on his banner night. Guess he laid a Star-Spangler Banner on you tonight. Hold on, that doesn’t look right, I’m gonna audible out of this one. AD HOMINEM. OMAHA. GO. Marcus Smart? More like Marcus Stupid. Sometimes you gotta pick up the easy yardage. Manning Slam.

• Oh, man, it’s there. All my time studying the tape is paying off. Gotta take the shot: Seahawks head coach Pete Carroll said the NFL should look into the use of medicinal marijuana for its players. Guys, I can’t believe the coach of this Seahawks team would support liberalizing the league’s drug policies! YES! Oh, man, that felt great. Ultimate Manning Slam.