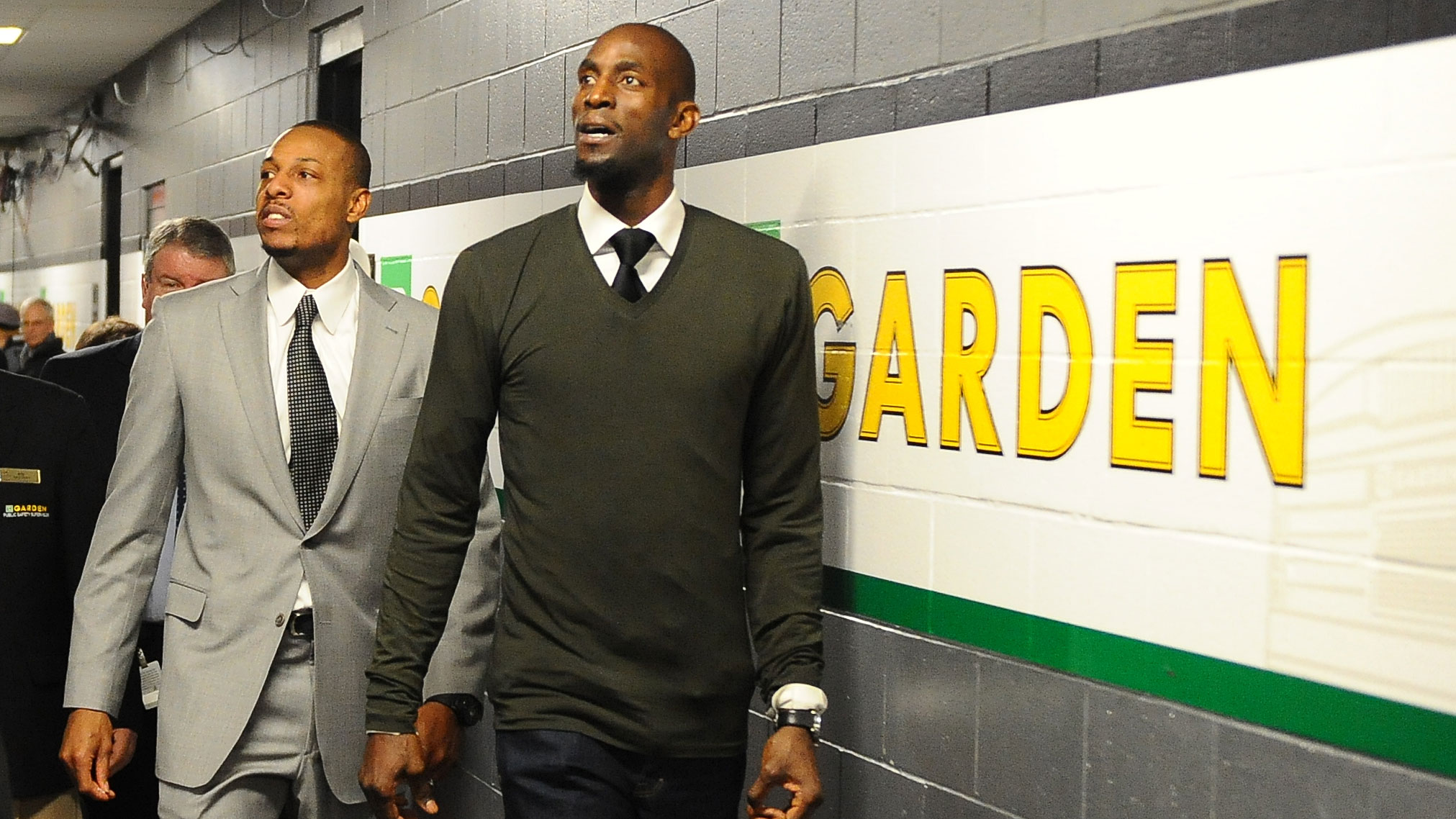 I don’t know exactly when the rituals surrounding the return of a beloved player became so codified, but while watching Paul Pierce’s and Kevin Garnett’s return to Boston last night, it was unavoidable: Every “heartfelt moment” was expected and carefully scripted. The narrative had been set seven months ago, of course; almost from the moment Pierce and KG were traded, some of us were anticipating the day they’d return, and the gushy tribute videos with which they’d be greeted. Finally, last night, Brooklyn came to Boston, and brought with it expectations of closure, gratitude, community — and at least a bit of the waterworks. Before the game, Chris Broussard interviewed Pierce, and more or less asked him if and/or when he would start crying. The announcement of the starting lineups was met with loud cheers for both players — but no evident eye-watering. Mark Jones seemed to be expressing explicit disappointment that this wasn’t quite as weepy as he’d expected. The Nets were trying to keep up a winning streak. The Celts were trying to work Rondo into the offense. Meanwhile, we were lusting for tears.

For something as purportedly disruptive as a fan favorite leaving town, this, it turns out, is all surprisingly orderly. First, the player gets “shockingly” traded. Then the player takes out a newspaper ad thanking the team and its fans for years of support. Then the dude gives a bunch of gracious interviews reminding everyone he’ll always love the town and its best-in-the-world fans. Then he plays for his new team in his new jersey and you think, “Huh, that looks weird.” Then he has his homecoming game, and gets his montage video, and we get to rehash the good times.

Fans of the Big Three–era Celtics have seen this a bunch. Doc Rivers got a tribute earlier this season; Ray Allen, acrimony and all, got one his first season in Miami, too. Kendrick Perkins got one. Brian Scalabrine got one. Tom Thibodeau got one. Eddie House got one. That two more were coming, one each for KG and Paul, was obvious. We even knew, thanks to the Boston Globe’s crafty piece on the process of putting these things together, that they’d come after the game’s first timeout.

“About four people help make the videos,” the Globe explained. “None of the videos are pre-canned, and there is no formula for how they are constructed.” There were about a dozen hours of game film to sort through for Pierce, and about eight for Garnett. And there were three main areas of focus: on-court footage, community activism, and engagement with the fans. “From there, sequencing is crucial, especially at the start of the video, as the first few clips almost always run in slow motion for dramatic effect, meaning they eat up a lot of time … the key is not to cram everything in, which might affect the pacing, making the video feel rushed.”

The team likes to keep them to 60 seconds, estimating that fans lose interest after that; also, they want to keep them short so that fans get a chance to cheer before the TV timeout is over. According to Celtics chief marketing officer Shawn Sullivan: “A lot of teams, unfortunately, tend to overkill and overproduce these moments. And you tend to lose the generic, natural beauty of a crowd going crazy.”

Sullivan probably didn’t mean “generic” in the negative connotation of the word, but he’s absolutely right — the beats and pacing of this kind of thing are so well-worn. That is, largely, the point: We’re all sentimental saps about this kind of thing, and we want every last one of our nostalgia-serotonin buttons pushed, and pushed hard. But last night, somewhere between Broussard and Jones preemptively talking up tears, and the actual lackluster on-court reality, you wouldn’t be faulted for wanting to fight back.

With Brooklyn recently inching toward respectability, and the 2014 Celtics doing 2014 Celtics things — Phil Pressey bricking wide-open 3s with the fervor and agility of a much older man; Kelly Olynyk taking at least one inbounds pass off the back of his large head — it was certainly the hometown team that was the more depressing lot. But with this being the rare up-and-down game that was actually … what’s the official term? … totally atrocious, the Nets couldn’t quite escape the depressing pall of midseason NBA mediocrity, either.

Pierce, with not much lift, looked flat and, frankly, old. Jason Kidd, with his new-beard/shaved-head/no-tie get-up, looked perpetually like he’d just gotten done stubbing out a cigarette while employed as the senior promoter for Prague’s third-hottest dance club. And in the midst of all that rubbish, we were expected to have feelings? I mean, what, you think you can just slap a couple of expertly edited montages up and expect me to care?

Well, OK, yeah — of course you can. Once KG, then Paul, got their videos — and got to blow kisses and nod with watery eyes and mouth, “I love you” to thousands of people so, so appreciative of all the fun they’ve had thanks to these two dudes — it didn’t matter at all. There was Jack Nicholson bellowing, “You can’t handle the truth!” There was one lady holding up a Pierce jersey, nearly convulsive with tears. There were two blank spots on the retired-number banners. Goddamn, it was perfect.

You could have tried to be cynical. But you’d have been vastly underestimating the potent powers of a soundtrack and a montage. As Steve Gadsden, another member of the Celts video staff, put it in the Globe piece: “You just lay the music track and make it look nice and include all the big moments and people will enjoy it … I mean, videos like this, it’s hard to mess up.”