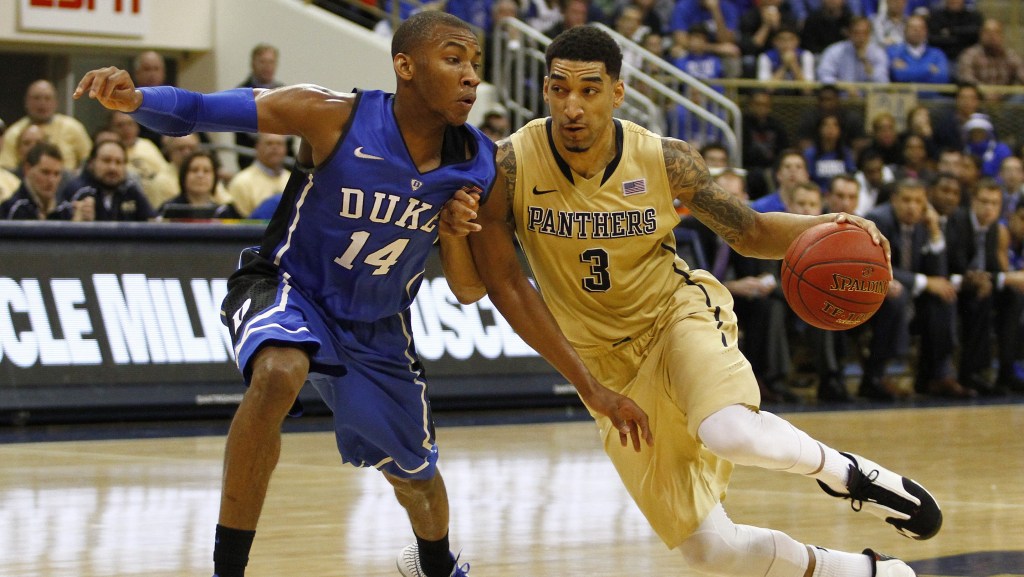 If you play in a major conference, and you compile an 18-2 record, do you have the right to complain when the AP ranks you only 18th in the country? When nine teams ahead of you have more losses, and you nearly won a game at Syracuse? When Ken Pomeroy has you ranked fifth in the country based on your offensive and defensive efficiency? When your point guard has 30 assists to just seven turnovers in conference play, and your star leads the ACC in scoring during conference play, and your 6-foot-9 forward gets to the line at a higher rate than anyone else in the conference? Should you be furious at the disrespect?

Fans of the Pittsburgh Panthers thought so, but there was a small problem: Their team hadn’t beat anybody. Until mid-December, the highlight of Pitt’s nonconference schedule was Stanford, and that’s no highlight at all. Next, Jamie Dixon and the Panthers met Cincinnati in the Jimmy V Classic, shot 31.4 percent from the floor, and lost, 44-43, in one of the ugliest games of the season. They reeled off six more wins against virtual nobodies before visiting undefeated Syracuse in the Carrier Dome, where they played solid defense but shot 38.3 percent from the field and were outscored 10-2 in the last four minutes. It was a respectable showing, but facts were facts, and in the only two games the Panthers had played against top-50 RPI teams, they’d shot poorly and lost. A decent home win against Clemson followed, and a close call against Maryland on the road, all of which led to the golden opportunity: Duke.

This should have been the game when the whispers stopped and Pitt proved that it was more than a paper tiger. The Blue Devils were a good team with a great offense, sure, but they had already dropped two conference road games against lesser opponents, and they had looked very, very vulnerable on defense. Plus, this game was at home, and students had been camping out for two days (OK, so it’s not exactly K-Ville, or even Boeheim-burg, but it’s a start) to watch the first ACC game against Duke. The Petersen Events Center would see a record crowd, and Pitt would assert itself as a team that belonged in the top 10. With a point guard as consistent as James Robinson, an attacking forward with Talib Zanna’s aggression, and the ACC’s best scorer in Lamar Patterson, a big win was in the cards.

The only problem was that Duke had started to look just a little bit scary. The word “great,” when used to describe this year’s Blue Devil offense, is actually a huge understatement. As it stands, with 121.1 points scored per 100 possessions, Coach K has his best scoring offense since the 1998-99 Trajan Langdon/Elton Brand season, exceeding the Battier/Boozer/Williams/Dunleavy national title team, the Singler/Smith/Scheyer national title team, all the Redick years, the Kyrie Irving and Austin Rivers experiments, and everything else. This is an historically great offense, and those numbers take into account the slight dip early in ACC play, when Jabari Parker began settling for long jumpers and the rest of the team had a small identity crisis.

After a recent win against Virginia, Coach K heavily implied that the team’s struggles in early January could be attributed to his understandable distraction after the death of his older brother, and whether that was the case or not, you couldn’t argue with the ensuing results: four consecutive wins, three of them emphatic, and the last one against a strong defense in Florida State (whose leading scorer, Ian Miller, probably won’t make the mistake of underestimating Duke’s offense again). Scariest of all, though, was the fact that previous question marks were being erased. Amile Jefferson had begun to play like a veteran, smart and aggressive, bolstering Duke’s inside presence. Parker had quit his Carmelo act, and when he wasn’t getting to the line, he was camping under the offensive glass and using his physicality to score second-chance points and post double-doubles. The vulnerable finesse team that had lost to Clemson and Notre Dame was disappearing, and Duke became a team that could blow out strong opponents even when shooting 30 percent from the floor.

For both teams, the stakes were high; Pitt needed to prove it could beat a good team, and Duke needed to show that the rebirth was complete. Vegas had Pitt by four, Pomeroy had Pitt by six, and most people (myself included) felt that the two possibilities were a double-digit Pitt win or a game that came down to the wire.

Most of us were wrong. For Pitt, the 80-65 loss was a disaster that confirmed everyone’s worst fears — another loss against a good team, another bad shooting night, and more evidence that the Panthers are overrated by virtue of a cupcake schedule. For Duke, the win was proof that the offense has reached a level somewhere between “insanely dominant” and “totally unstoppable,” and that the defense has gone from bad to decent to maybe, possibly, kinda/sorta good.

Pitt managed to keep things close in the first half, and some of its possessions showcased why it was (and remains) second only to Duke in ACC offensive efficiency. One in particular, which resulted in a Cameron Wright 3-pointer, was the basketball equivalent of watching Barcelona score a crowded tiki-taka goal with beautiful passing in heavy traffic:

Duke came out of halftime with a two-point lead, and both teams caught fire. But while Pitt slowly began to wear down, Duke was inexorable, scoring from what seemed like every position on the floor. Part of what makes the team so dangerous is that every single player (except Marshall Plumlee, bless his heart) can get to the rim. At the point, Quinn Cook is prone to turnovers and Rasheed Sulaimon has been cold for most of the season, but both can drive-and-finish or drive-and-dish almost at will. Rodney Hood and Parker are two of the best offensive threats in the league, and even a guy like Jefferson can get to the rim and create open shots. Duke is playing some kind of version of Total Football, with players changing roles fluidly; this is the kind of team in which a big man can drive from the top of the key and find a point guard for an open 3:

As for Parker, who posted his third consecutive double-double with 21 points and 11 boards, the best thing you can say is that he has forced himself to be good again. The November/December stretch was his coming out party, where he showed his natural skill set and looked incredible even in Duke’s loss to Kansas, but January brought the inevitable freshman conference-play slump. He settled for long jumpers, was slow on defensive rotations, and didn’t quite know how to pass when opponents hit him with a double-team (with four assists in eight conference games, that’s still a work in progress). Starting four games ago, though, he went back to basics, reasserting himself into the flow of the game, playing inside, and generally using his native skills to score points. He’s back to being one of the best players in the ACC, and the shots aren’t even really falling for him. When that changes — and it will — he’ll return to the national discussion.

The team’s MVP, though, and in my opinion the MVP of the conference, is Rodney Hood. Not only did he spend the game shutting down Patterson, but he continued to light up the stat sheet on offense, scoring 13 points and dishing out four assists. He’s top five in the ACC in scoring, 3-point shooting percentage, offensive rating, and free throw percentage, and he’s capable of shutting down the opponent’s best player. All that considered, he’s already made a case as Coach K’s best transfer ever.

With all those weapons, it’s almost unfair that Duke has an assassin waiting in the wings. But it does, and his story is wonderful, and in any given game, he’s the toughest kid on the court. Last night, Andre Dawkins was the flame that burned Pittsburgh to the ground:

Duke’s last four games have taken on the narrative of a video game, each contest slightly more daunting, the levels getting harder and harder. And Saturday night, at the Carrier Dome, they take on the big boss. Syracuse has yet to lose, and though the Orange don’t necessarily look invincible, they have a disheartening way of finishing teams in the final five minutes. It’s a team defined by the preternatural composure of Tyler Ennis, one of the best point guards in the country, and the sheer, staggering size Jim Boeheim has amassed to fill out the pieces of his swarming zone. The game will break every attendance record for regular-season games, and unlike Pittsburgh, Syracuse won’t wilt in the face of an offensive barrage. The winner will have an inside track to the ACC title, and Duke will have to capitalize on every bit of its resurgence to steal a win.

As for Pitt, there’s little left to say. The worst happened — another good opponent, another dud. Robinson and Patterson can’t quite create as advertised, and you get the feeling that when Virginia rolls into town on Sunday, it’s going to be another long game for the Panther offense. There’s still everything to prove, and nothing to show.

Last night, as the final seconds rolled down, Jamie Dixon unwittingly provided a perfect microcosm for the entire game as he approached Coach K in the handshake line. Whether it was bad timing, anger, or just embarrassment, he couldn’t look him in the eye.

For the first time in the history of college sports, athletes are asking to be represented by a labor union, taking formal steps on Tuesday to begin the process of being recognized as employees, ESPN's "Outside The Lines" has learned.