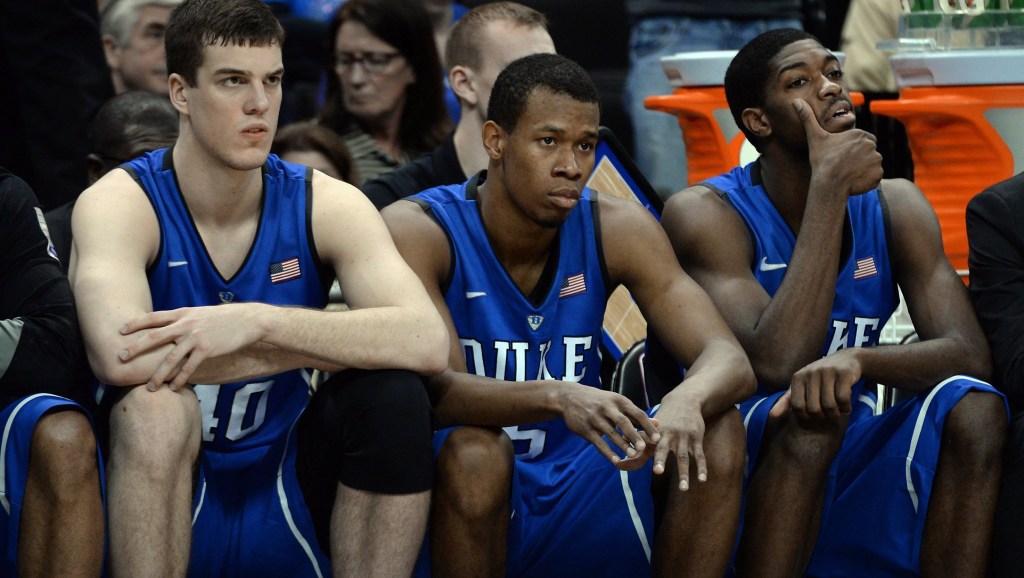 In case you were busy mourning the end of the Hester era in Chicago, here are the six biggest stories you missed in sports on Wednesday:

In the realm of very tall college athletes:

The ACC continued to bring its top teams down to size in the run-up to the conference tournament as Duke was shocked by Wake Forest, 82-72. The loss likely knocks Duke off the top line in the upcoming NCAA tournament, although many question whether the Blue Devils’ seed will matter. On the one hand, it’s unlikely to be a major factor as the team was looking at the fourth overall position behind Florida, Wichita State, and Arizona, so a small slide down likely won’t affect the caliber of opponent it would face. On the other hand, we can’t rule out the impact of chaos theory, meaning that Duke’s seed change could affect everything. Everything.

In meaningless soccer matches that will be dissected to death:

England grabbed a narrow 1-0 win over Denmark and the United States looked poor in a 2-0 loss to Ukraine. “Man, everything went right for Ukraine today,” said American forward Clint Dempsey after the match, before curling his lips and saying, “Well, except … um … you know … I guess it’s good they got this one. Yeah. They can tread just this once.”

In the former playground of David Stern:

Things are getting weird in the NBA, as the New York Knicks grabbed a rare win and Joakim Noah is suddenly the league’s foremost triple-double specialist, after recording his third in the past month in the Chicago Bulls’ 105-94 win over the Detroit Pistons. When asked about his sudden surge in assists, Noah got a far-off look in his eyes and said, “It’s weird. That’s not my game. Not my game at all. But it’s like there was some sort of time echo. Like hell itself was knocked down a peg, changing everything in our reality.” Noah then cleared his throat and added, “Or, you know, most of our good players are hurt and they traded all the rest so I have to do every damn thing in this town. Or maybe the hell thing. Who knows?”

In the continued offseason adventures of the NFL:

Sources are reporting that Champ Bailey will be the next high-profile cap casualty as the Denver Broncos will part ways with the future Hall of Fame cornerback. Now, I’m not one to kick a man when he’s down, but I think now is the time for me to say it: Champ Bailey has weird tiny ears.

Brewers slugger Ryan Braun upped his spring training batting average to .875 in Milwaukee’s 7-2 win over the Oakland A’s. Now, I’m not one to cast stones at a guy like Braun, but I think it’s fair to say his performance is a little suspicious. I know, I know, it’s totally unfair to lob accusations in this day and age. But man, it just seems like he’s too good. If only there were some evidence! Oh well, I guess we’ll just have to take these numbers at face value.

The Montreal Canadiens made the biggest acquisition of the NHL trade deadline, acquiring Thomas Vanek from the New York Islanders. The likely half-season rental is leading many to question whether the move will matter come playoff time. On the one hand, Vanek shores up a relatively weak offensive attack for the Habs, and his presence could allow the Canadiens to win a series or two in the Eastern Conference playoffs. On the other hand, we can’t rule out the French Canadian existentialist perspective that would suggest that none of this matters. We’re all simply shadows of ourselves, dancing our way through our meaningless lives, and nothing that happens, especially a trade in the NHL, could affect anything.

MLB 27-Day Warning: The Astros Are Going to Suck Slightly Less This Year

The Year We Fell Asleep on Rick Pitino (and Lived to Regret It?)