MLB 27-Day Warning: The Astros Are Going to Suck Slightly Less This Year 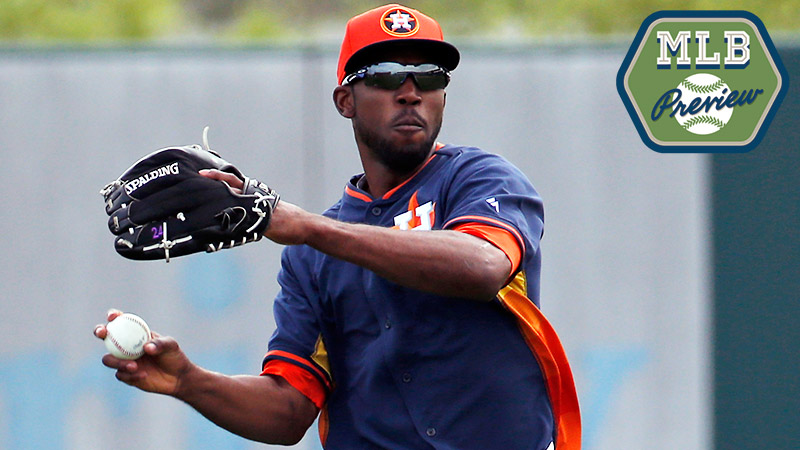 It seems almost unbelievable that we’re less than 10 years removed from the Houston Astros winning a pennant, because of what’s come since: six losing seasons in eight, and more win totals starting with a five than with an eight.

In the spring of 2011, Jim Crane bought a franchise carrying a salvage title and hired Jeff Luhnow away from St. Louis to oversee the most ambitious rebuild in recent baseball history, one that saw Luhnow abandon even the pretense of trying to win now in the interest of accumulating and blooding young players and reclamation projects for a run at contending several years down the road.

It’s been ugly. Luhnow’s Astros set a franchise record for losses in each of his two seasons, and they’ll pick first in June’s amateur draft for the third season in a row. They lost 111 games last year; the hypothetical “replacement level” team that FanGraphs and Baseball-Reference use to calculate WAR and mock Yuniesky Betancourt would lose about 114 games. Keeping with the theme of WAR, Baseball-Reference says the 50 players who suited up for Houston last year generated 8.6 WAR. Total. Carlos Gomez alone was worth 8.4 WAR last season. Take away Jason Castro, who’s a nice catcher but nobody’s idea of a superstar, and 49 Astros came up with 4.1 WAR, exactly what Juan Uribe posted in 2013.

In the wake of bad TV ratings and an empty ballpark — though it’s worth noting that the Rays and Indians made the playoffs without drawing as well as the Astros — Luhnow and Crane are taking heat for not trying to win.

Well, there are two pieces of good news: First, this isn’t entirely Luhnow’s fault, because the Astros lost 106 games in 2011 under Ed Wade, who was, at least ostensibly, trying to win. (Not that it was always easy to tell.) Second, 2013 was rock bottom, so Houston’s going to get better, and soon.

It’s easy to predict that a team will improve on a 51-111 record, but all signs point to the positive changes being more than superficial. First of all, when a team trades away all of its competent major leaguers and starts losing 100 games a year, its farm system tends to get really good, thanks not only to prospects acquired in those trades, but also to better draft picks and heftier international signing bonus pools.

The 2011 trade that sent Hunter Pence to the Phillies netted the Astros pitching prospects Jarred Cosart and Josh Zeid and first-base prospect Jonathan Singleton. The pitchers both came up at the midseason mark last year and were two of the team’s better performers in limited action (particularly Cosart), while Singleton should join the big league club this year. Catcher Max Stassi was one of three players who came over from Oakland for Jed Lowrie in 2013. If Stassi continues to develop, he could make Castro expendable as a trade chip, which would net more young, cheap talent. Also making their debuts in midseason 2013: Jonathan Villar, who was acquired in 2010 in the Roy Oswalt deal, and Robbie Grossman, who was acquired in 2012 in the Wandy Rodriguez trade.

First-rounders George Springer, an outfielder, and Mark Appel, a starting pitcher, should also play, and play well, for the big club sometime soon; whenever that sometime is, they probably won’t be worse than J.D. Martinez and Lucas Harrell were last season. (In 2013, Harrell threw 153⅔ innings with 89 strikeouts and 88 walks; it’s not often you look at a 6-17 record and 5.86 ERA and can say, “Actually, it’s even worse than that.”) The biggest gun in the system is shortstop Carlos Correa, who’s built like a brick house and, like a brick house, is mighty mighty. He just turned 19 in September, though, and he topped out last year in low-A ball, so he’s still a couple of years away from reaching the majors.

The other advantage to having traded away all of the major league talent, and the best non-draft-related argument for not worrying too much about losing 105 games instead of 90, is that occasionally the kids who take the field way sooner than they should wind up sucking less than everyone thought they would.

Take, for example, Triangle favorite Matt Dominguez, a former first-round pick and top-100 prospect whom Luhnow acquired for peanuts because Dominguez has the on-base skills of an egg salad sandwich. No team with any intention of winning would have used Dominguez in 152 games last year, but the Astros did, and in the process they discovered that their thrift shop pickup could play excellent defense and hit 21 home runs. That means Houston had about an average third baseman for half a million dollars, even though he did post a .286 OBP. Or take Brett Oberholtzer, a finesse lefty who never posted an ERA below 4 in Triple-A and came over from Atlanta for Michael Bourn in one of those trades that deludes talk radio callers into thinking major league teams will trade one good player for 14 crappy ones.

Oberholtzer came up last season and pitched very well in 10 starts. A low BABIP and HR/FB rate indicate he’s not likely to post a 2.76 ERA off a K/9 ratio below six again, but it’s easier to approach that when you’re left-handed and never walk anyone. ­With Cosart already in the rotation and Appel, Mike Foltynewicz, Lance McCullers, and (presumably) Carlos Rodon coming soon, Oberholtzer doesn’t have to be an ace to be valuable.

The most exciting thing for Astros fans this offseason, though, should be acquiring Dexter Fowler from Colorado. He’s not an All-Star, but he’s an established legitimate major league regular, and the Astros haven’t gone out of their way to get one of those since they acquired Lowrie from Boston … before trading him away again a year later. Really, Houston hasn’t gone out and gotten a player of Fowler’s quality since Brett Myers. The book on Fowler is mostly negative: He’s one of those guys who plays in Coors and has huge platoon splits, and despite being endowed with tremendous speed, he doesn’t get a lot out of it in terms of either defense or stolen base efficiency.

That said, Fowler has a career .365 OBP, and while Minute Maid Park isn’t Coors Field, it’s also not PETCO. And the Astros got Fowler for Brandon Barnes, who’s terrible, and Jordan Lyles, who’s complicated. I mean, Lyles is a 23-year-old former first-rounder, and the Rockies need all the pitching they can get, but Denver’s not the place I’d want to try to rehabilitate a guy with a career 5.35 ERA.

Anyway, Fowler’s the kind of player a team goes after when it’s trying to get better now. His acquisition signals that Houston is almost done setting up the dominoes and is about to start the Rube Goldberg machine.

Make no mistake, the Houston Astros are going to be terrible this year. They’re probably going to lose at least 90 games and finish last in a tough division. But they’ll be significantly less terrible in 2014 than they have been in the last three years, and in another year or two, they likely won’t be terrible at all.