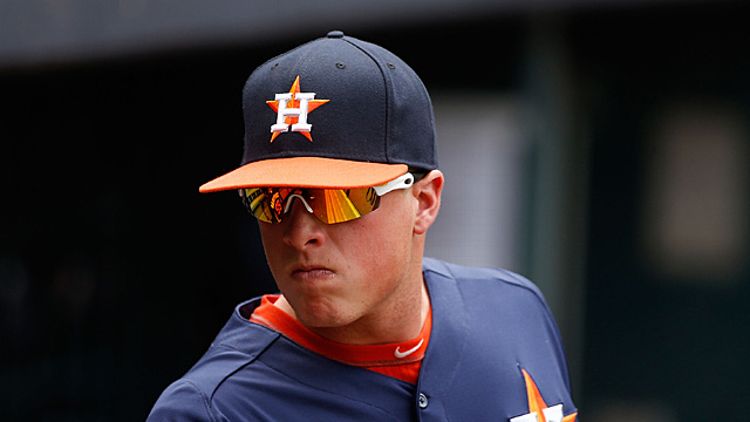 In December of 2011, emboldened by a colorful, exciting rebranding and a colorful, exciting, publicly funded stadium, the Miami Marlins signed the jewel of the 2011-12 free-agent class, shortstop Jose Reyes. Miami made room for Reyes by moving franchise shortstop Hanley Ramirez over to third base.

Had Reyes not signed, the Marlins could have used strong-armed, sure-handed former first-round draft pick Matt Dominguez at third base in 2012. Dominguez was already one of the top defensive prospects at his position. But with Ramirez holding down the position, Dominguez spent most of 2012 in AAA. Then, on July 4, the Marlins, for some reason, traded him and pitcher Rob Rasmussen to Houston for Carlos Lee.

Even granting that Astros GM Jeff Luhnow is reputed to be one of the brighter guys in the game, and that the long-term rebuilding project he’s undertaken in Houston affords him the ability to take some risks, it looked like a good deal for Houston. After all, Dominguez, who twice appeared on the Baseball America Top 100, was about to turn 23, and the Astros got him for the last couple squirts from the ketchup bottle of Lee’s career.

The real question with Dominguez is this: How much does he have to hit in order to be a valuable major league player? In order to figure that out, the Astros have to come up with satisfactory answers to several extremely difficult questions.

First: What is Dominguez’s defense worth? Given that he’s only played 66 games in the majors, we don’t have anything approaching enough data to make a judgment. And while, qualitatively, it looks like Dominguez is pretty good at third, that’s a frustratingly inexact answer. If Dominguez is Scott Rolen–level good and saves his team 15 runs a year, that’s a huge advantage over only being Eric Chavez–level good and saving his team five runs a year. And what if he’s a generational talent with the glove, worth 25 runs, or 30? It’s really difficult to give an answer that exact, even with the benefit of advanced statistics, and even with an experienced eye for talent.

But if Luhnow and his men can put together a satisfactory evaluation of Dominguez’s defensive value, they can start talking about what constitutes an acceptable level of offensive production. And the jump may not be as great as you might think. Last year, Placido Polanco bellied up to replacement level with a 69 OPS+ on the strength of defense that was about as good as what we can expect from Dominguez.

If Dominguez is truly an elite defender, particularly given how hard it now is to find good help at the hot corner, he actually shouldn’t need league-average offensive numbers to be considered a good overall third baseman. It might seem strange to root for a guy to drag his OBP up to .310 so he can stay in the lineup, but that’s exactly what Astros fans should be doing.

Dominguez’s situation isn’t exactly unique, but it’s not the norm. Prospects who can hit get promoted and moved around the diamond according to what position they can play. Jonathan Singleton tried left field until it became clear that he could only really field first base. Miguel Sano is currently playing third base, but as he fills out, will he be forced to move to first?

You get to third base in the majors by being able to hit really well and by being either too big or too bad a defender to play shortstop. It’s what happened to Ryan Zimmerman and Chipper Jones, and it’s what’s going to happen to Xander Bogaerts and Corey Seager. It’s happening, probably unwisely, to Manny Machado in Baltimore.

Good young third-base prospects tend to have the bat question answered, and guys who are as far from having a passable hit tool as Dominguez is, at his age, tend to die on the vine at AAA.

Acquiring Dominguez, then committing to play him every day until he learns to hit or a better solution presents itself, is a move that most teams can’t afford.

Odds are that Dominguez will continue to be the kind of all-glove .300 OBP guy who kicks around as a backup for a few years, then goes away for good. But you should try to watch him in the field while you can — even if it’s not worth a major league roster spot, his glove is worth the price of admission.