The Year We Fell Asleep on Rick Pitino (and Lived to Regret It?) 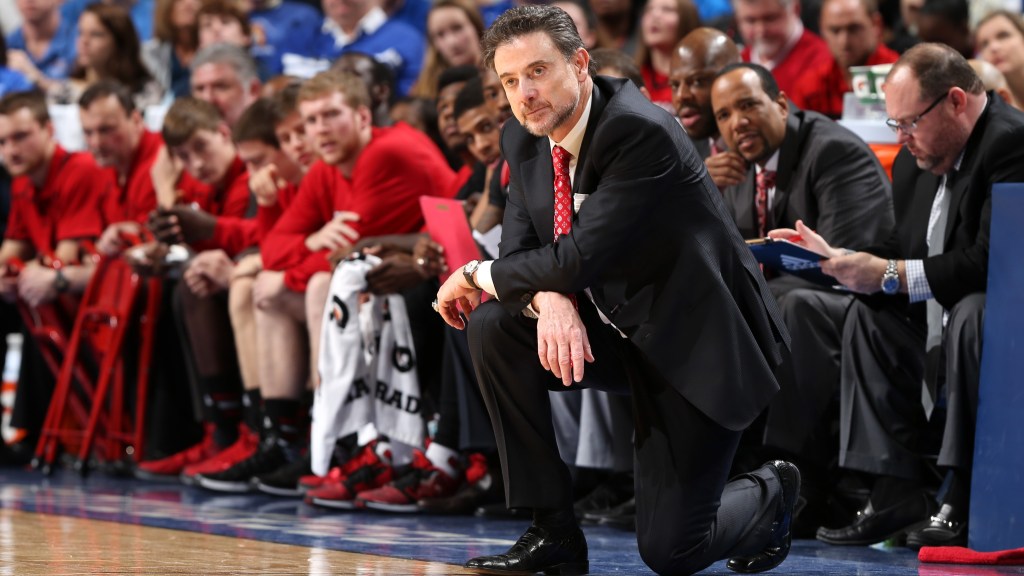 There was a point in time — a point that looks pretty hilarious now — when four teams met in Chicago for an early-season doubleheader, and we all left so impressed that it felt logical to argue that three or even all four of those teams might meet again in Dallas in April. The night was November 12, and the four teams were Michigan State, Kentucky, Duke, and Kansas.

Fast-forward to the present, and the prediction looks really, really awful. Michigan State has been ravaged by injuries, and despite Tom Izzo’s best efforts, the team has now lost six of its last 10, including a pretty embarrassing home loss to Illinois in which the Spartan offense produced 46 points. Kentucky is in its own free fall, proving yet again that maybe it’s not such a great idea to load up on blue-chip freshmen every year, and maybe John Calipari’s 2012 title team was the kind of transcendent gathering of college stars that happens once in a career rather than a sign of a sea change in the sport. (Also, never print shirts like this unless you enjoy being a season-long punch line.) Duke’s offense has hit the skids in the last three weeks, and last night’s loss to Wake Forest was the latest evidence that when you combine the stress of a hostile crowd and foul trouble, the Blue Devils are going down (not a great sign for the tournament). That leaves Kansas, and Kansas has the best shot of all four to make the final weekend. But with seven losses and Joel Embiid struggling with a back injury, there’s none of the unabashed November optimism in Lawrence right now.

Other teams eventually took up the banner as “the favorite.” Syracuse started 25-0, but seemed to lose all momentum in February, and has looked miserable in the second half of the month with home losses to Boston College and Georgia Tech. Arizona finally showed vulnerability in February, too, though Sean Miller’s club appears to be returning to dominance. Wichita State is undefeated, Florida is 17-0 in the SEC and a favorite for the national title, and Virginia, at 16-1 in the ACC, is the surprise of the regular season.

These are the teams we’ve been talking about, and some have risen while others fell. But there’s one we’ve been ignoring, in a weird hybrid league called the American Athletic Conference, and that team has gradually been climbing the rankings and sneaking up on the rest of the favorites. That seems to happen every year, but what makes this situation unique is that the team is coached by a legend in his prime, and just happened to win the national title in 2013.

Last night, the no. 11 Louisville Cardinals went into SMU and dealt the no. 18 Mustangs their first home loss of the season, 84-71. Before this loss, Larry Brown’s team had beat Cincinnati, Memphis, and Connecticut — the class of the AAC — by 21, 15, and nine points at home. It even took down UConn on the road, and what Brown, the only man to coach both an NCAA and NBA champion, has done with the program deserves its own 8,000-word feature. But against Louisville, the Stangs were just another victim of a team that is progressively rounding into championship form.

The lack of enthusiasm for the Cardinals in the first part of the season made some sense. They didn’t have a marquee freshman like Jabari Parker or Andrew Wiggins, and they didn’t play in any fun early-season tournaments. When they finally met a decent team in North Carolina, they lost. They next time they faced a decent opponent (Kentucky), they lost. The next time they faced a decent opponent (Memphis), they lost. That brought the Cards to mid-January, and though the 13-3 record was fine, there was nothing that inspired much confidence that the team could reach its third consecutive Final Four or repeat as champions.

Things began to turn in January, and the 12-2 record in the season’s second half has included all the quality wins it was missing — road wins at UConn, Cincinnati, and SMU. More importantly, the statistical profile is starting to look awfully similar to a year ago. The Cardinals now boast the seventh-best defense and 12th-best offense in the nation, numbers that very few teams can match. And while others like Duke and Syracuse are dipping with February fatigue, Lousiville seems to be peaking. Against SMU, the Cards had four players in double figures. One of them, Russ Smith, was last year’s Most Outstanding Player in the Midwest Region, leading his team past Oregon and Duke for a berth in the Final Four. Another, Luke Hancock, was the MVP of that Final Four. Another, Montrezl Harrell, is playing the best basketball of his career and also has pressure-packed tournament minutes on his résumé. And the last, point guard Chris Jones, was 2013’s Junior College Player of the Year and led his former team to two consecutive national title games.

The experience factor is off the charts, and they’re led by one of the best tournament coaches in history. If Louisville manages to win out and capture the AAC tournament title, a no. 2 seed is a real possibility, and suddenly an Elite Eight matchup with a team like Wichita State or Virginia might be all that’s standing between Pitino and his third consecutive Final Four. Who would you rather have in a pressure situation — Hancock and Smith, or a reduced version of the Wichita State team they beat in last year’s Final Four? Hancock and Smith, or a Virginia team with a total of zero players who have ever been a part of an NCAA tournament win? Hancock and Smith, or a Florida team that has lost in three consecutive Elite Eights?

Louisville will be in the ACC next season, and the uncertainty of the AAC’s strength in relation to the rest of the country has kept it out of the spotlight for most of the year. It’s a fluky schedule, a few early losses, and an unknown conference that have kept Pitino’s crew under the radar, and it may be the first time a defending national champion that returns at least three key components had that luxury. The Cardinals were always going to be a tough out in March, regardless of how they were perceived. But the fact that nobody sees them coming? That’s how a good team reaches greatness for a moment that’s admittedly brief, but just long enough to steal a national championship.

Only 3-Pointers and Layups: The Rio Grande Valley Vipers on the Grantland Channel