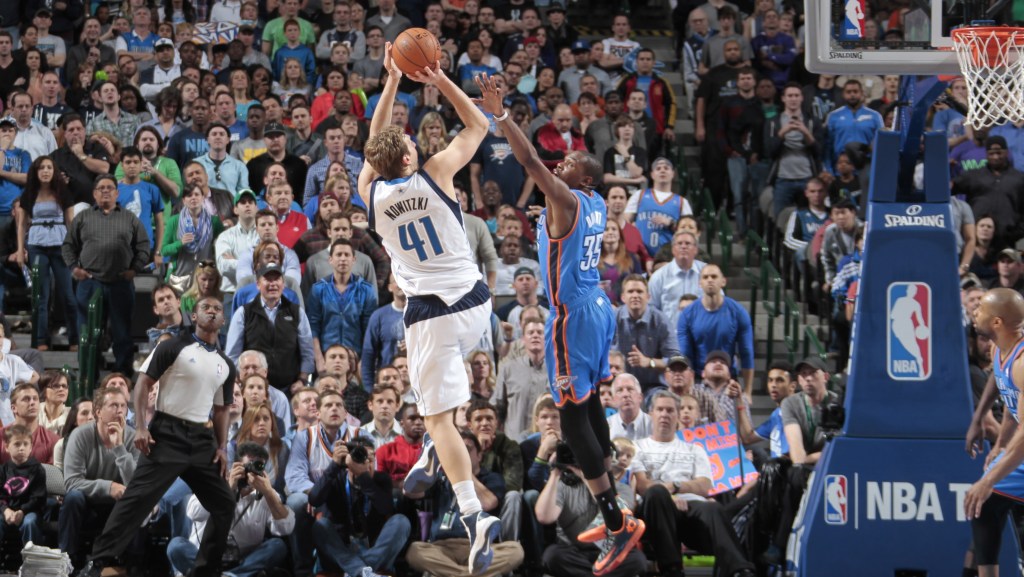 In case you were busy consciously uncoupling yourself from a leftover meatball sub, here are the five biggest stories in sports you missed on Tuesday:

In the joyous spectacle of Western Conference hoops:

Dirk Nowitzki’s 32 points were enough stop a rampant Kevin “Muffins” Durant as the Dallas Mavericks beat the Oklahoma City Thunder 128-119 in overtime. This despite Nowitzki believing through the entire first half that Adam Silver had banned all dunking in the NBA after reading only the tail end of the SportsCenter scroll describing new NFL anti-celebration policies.

Manchester City grabbed a 3-0 win over rivals Manchester United to cement their place in the Premier League title race and heap more woe on United manager David Moyes. The loss was so bad that United fans berated former manager Sir Alex Ferguson for naming Moyes as his replacement. And people say Manchester United fans are fair-weather fans! This shows that passion for the club exists even when fortunes are down. I mean, what has Ferguson ever done for United supporters that would lead them to not yell at him for his successor’s failings? Name one thing that would maybe buy Ferguson a little bit of leeway? I mean aside from 13 league titles, five FA Cups, four League Cups, and two Champions League titles. Name one other thing!

Joe Pavelski’s hat trick powered the San Jose Sharks to a 5-2 win over the Edmonton Oilers. When asked what fueled his exceptional performance, Pavelski replied without hesitation: “A bottomless hate for Edmonton.” When asked what could possibly cause one to have such strong feelings toward such an innocuous city, Pavelski shot back, “Innocuous? Do you know how far north we are right now? I’m from Wisconsin and I think this shit’s insane. It’s fit for neither man nor beast here.” Pavelski then spat on the ground only to have the spit freeze solid on his face.

Florida upset top-ranked Florida State, 4-1, in a baseball game most notable for a bench-clearing incident that involved Heisman Trophy winner Jameis Winston. Credit to all involved for the subterfuge, but you can’t sneak a brawl faked to buy Winston some prime autograph signing time past About Last Night. We’re onto you, Winston. Or should I say Jameis Football And Baseball? Probably not.

In the ongoing tragedy in New York:

Lakers 127. Knicks 96. A boy and his father sit in their apartment in Queens. The boy is wearing a Patrick Ewing jersey made for a man. It had been a gift once. The father is wearing a suit. The father is holding flowers. The boy is holding a wrapped box. They sit and wait. They are expecting a guest. They are watching the game. The game drags on. The Lakers score 51 points in the third quarter. The Knicks capitulate. No one comes to the apartment. Hours tick by. The two men sit in silence. The boy thinks to himself, She’s probably very sorry. The man thinks to himself, Who needs the playoffs? Sadness overcomes them both. The sun has long since set. The boy considers opening the box; he had made a lanyard for the potential guest. He does not do so. She could come. The playoffs could come. She could come.

MLB 7-Day Warning: Checking In on the BARVES Story Lines

Pero Antic and the Biggest Macedonian NBA Fan in the World