Pero Antic and the Biggest Macedonian NBA Fan in the World 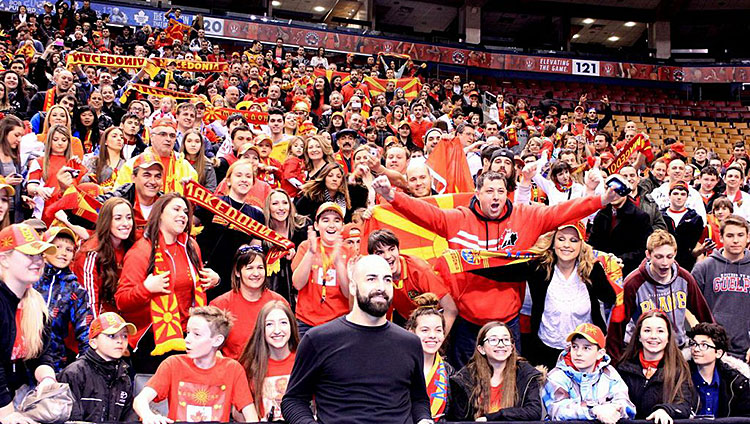 Bone Temelkov does not smile for photographs here in the upper deck of Air Canada Centre at the start of the Raptors-Hawks game, though he is wearing a gold-lamé-and-red-feather-plume helmet that is an Alexander the Great imitation but makes him look a bit like Marvin the Martian. Temelkov smiles easily otherwise. For instance: When 800 Macedonian Canadians of all ages rise around him, in their yellow and red shirts and hats and flags — some cheering, some booing, others scratching their heads — he grins and says, “We cheer for anything.”

But in front of the camera now, Temelkov is the boss. He descends from one of the most revered kings to ever walk the earth: Alexander the Great.

Temelkov is, first and foremost, a Macedonian. Remember that.

ATG is easily the most famous Macedonian — OK, some say he was Greek, but let’s sidestep that ancient argument — of all time. A bit further down the list is Pero Antic, a center on the Atlanta Hawks and the first Macedonian to play in the NBA. Today, Antic is appearing before the largest crowd of Macedonians ever gathered in an NBA arena. They are here to watch one of their own play the third-most popular sport in their country, behind soccer and handball. Three hundred of them actually came to see Antic sit injured on the bench last month, cheering as he hobbled to the occasional huddle. Temelkov brought them.

But now Antic is on the court, all nearly seven able-bodied feet of him: tattooed, bearded, shaven-headed, and every bit the Zaza Pachulia clone (in terms of imposing-ness) that Hawks fans hoped The Big Fella From Macedonia might be.

After more than a decade in Europe — he was the Bulgarian League MVP in 2008 — Antic showed up in Atlanta this season and started hitting last-second, game-tying, “sidesaddle” 3s off one leg. Well, he hit that one. But he’s had other highlights, too. True, he’s no Al the Great or Al Horford, whose shoes he’s had to fill since the All-Star went down in December with another torn pectoral muscle. But Antic is having a productive year, averaging a solid seven points and four rebounds as the Hawks try to hold on to the final playoff spot in the East.

Meanwhile, he’s become the Macedonian LeBron. At every arena he visits there are fans with red-and-yellow flags waiting for him. Especially in Toronto, which has one of the largest communities of expat Macedonians in the world.

Bone (pronounced bo-NAY) and his wife, Nina — who has no choice, really, considering whom she married — may be Antic’s biggest fans of all. They’re certainly the only ones high up here in the arena’s rafters wearing the ATG helmets, which they ordered from the homeland. Their children, Elena, 15, and Antonio, 13, sit nearby. They have special helmets, too, but they aren’t so into them. (Elena: “It’s kinda weird. Dad is going to wear that thing to bed.”) The rest of the Macedonian Canadians — gathered here because of Antic, yes, but also because of Temelkov’s powers of persuasion and organization — wear special baseball caps purchased and distributed by Temelkov.

Canada became Temelkov’s home in 1990. This was the year before Macedonia, a country the size of Vermont with about two million people, won its independence from Yugoslavia. He arrived here, he says, with 40 deutsche marks. Now he owns a nice home in a Toronto suburb. He works hard — as a telecommunications adviser for Bell Canada and a real estate agent — and he is proud of that work ethic. Antic makes him proud, too, of course. Temelkov calls Antic “Macedonia’s North American ambassador.” According to Temelkov, Antic belongs next to Goran Pandev, the soccer player, and Kire Lazarov, the handballer.

Temelkov spent four months organizing this “Macedonia Heritage Night With Pero.” He made shirts depicting Antic as Alexander the Great. He studied up on his modest NBA knowledge. He organized a postgame meeting between Antic and his countrymen, and a church gathering following that. He bought a journalist a beer after the first quarter, and loaned him his son’s unwanted helmet at halftime. 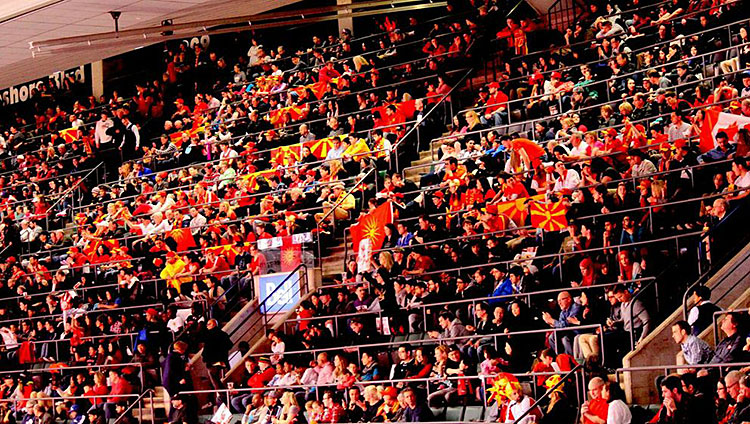 What he could not do is make Macedonians into something they are not: namely, fanatical. So they mostly sit still wearing their bright colors and occasional plumage, holding their banners and signs. Quietly but persistently, they ask Temelkov, in the Macedonian tongue, the same question phrased a dozen ways:

Bone, why is Pero not in the game? Can you put him in the game, Bone? Is the coach angry at Pero, Bone? Bone, can you hear me? Bone?

Antic finally enters the game and commits a quick foul. The Macedonians go what passes for wild in their country. Most of them do, anyway; one young man doesn’t look up from his nachos. But Antic lays the ball in minutes later and the man puts the food down to clap. Temelkov leaps up, hoisting his flag. Others follow. Cameras pan to the strange uprising in Section 311. Seconds later, all is still again.

Antic throws the ball away with six minutes left in the first quarter and coach Mike Budenholzer sends him back to the pine. The questions resume. But Temelkov doesn’t mind. “Macedonians around the world are thirsty for a Macedonian success story where we can show our colors and pride, and Pero Antic is one of them. I don’t care if he is on the bench, though I would prefer if he were not. I have not seen this much unity among Macedonian Canadians in a long time.”

There were a couple of good dunks — one by Terrence Ross, naturally — but it was not the game Antic’s Macedonian brigade had hoped it would be. Their hero had a double-double a few nights earlier, against the Bobcats. But he shot just 1-for-6, with four turnovers, against the Raptors. His line: four points, 10 rebounds, and three assists. The Hawks lost 96-86.

But Temelkov did get on the big screen, waving his flag during a timeout. And Antic said hello to him during a brief moment with the Macedonian crowd after the game. The entire three-minute interaction was conducted in Macedonian and included the singing of the national anthem. The gist, according to Temelkov, was this:

Crowd, singing: Walk out boy to the balcony and say hi to Goce’s Nation. Raise your hands high up. Over again will be ours solunsko grassland.

Heading back to the car with his family, Temelkov is beatific.

Nina: Are you going to take that hat off now?

Bone: Not until I go to sleep tonight. 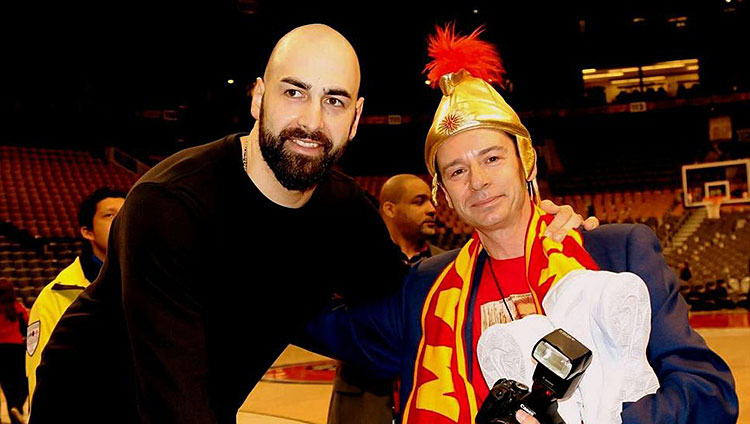 On the way to a church near his house, where he will give away a pair of Antic’s enormous game shoes, Temelkov gets stuck in traffic. “I’m guilty for this,” he says, smiling. “Too many Macedonians today.” An hour later we’re at St. Ilija Macedonian Orthodox Church, where an old man with a long, white beard is nearly done with a four-year project: painting saints on the walls of the church’s nave. One of them looks like a lot like Pero Antic. A coincidence? The man smiles but won’t say.

Gathered in a modest banquet room below the nave are nearly 100 Macedonians; most of them were at the game. They drink brandy and eat pizza, chatting about their lives, chuckling at the sight of Temelkov in his ATG hat preparing the raffle machine. After a long buildup, Temelkov finally calls the room to attention. It’s time to see who gets Antic’s signed shoes! Temelkov draws a slip of paper and reads the name. It’s a little girl, maybe 3 years old, who’d been playing with one of the shoes earlier. She doesn’t seem to realize whose shoes she will now own. Or that they are even shoes. She takes one and maneuvers it along the floor like a boat.

Temelkov’s daughter, Elena, watches all this from a table in the back. Despite her inherent teenage disinterest in these things, the whole strange shoe-giving ceremony has moved her a bit: “I guess I have a pretty cool dad,” she says. “But I’m not letting him put any pictures of me from today on Facebook.”

Outside, smoking a cigarette in the cold before getting back in his car, Temelkov basks in the glory of the day. “I hope you’ve learned something about Macedonians,” he says. “We are a proud people with much to offer the world. Pero, he is just the beginning.” And then, still wearing his ATG helmet, he is gone.