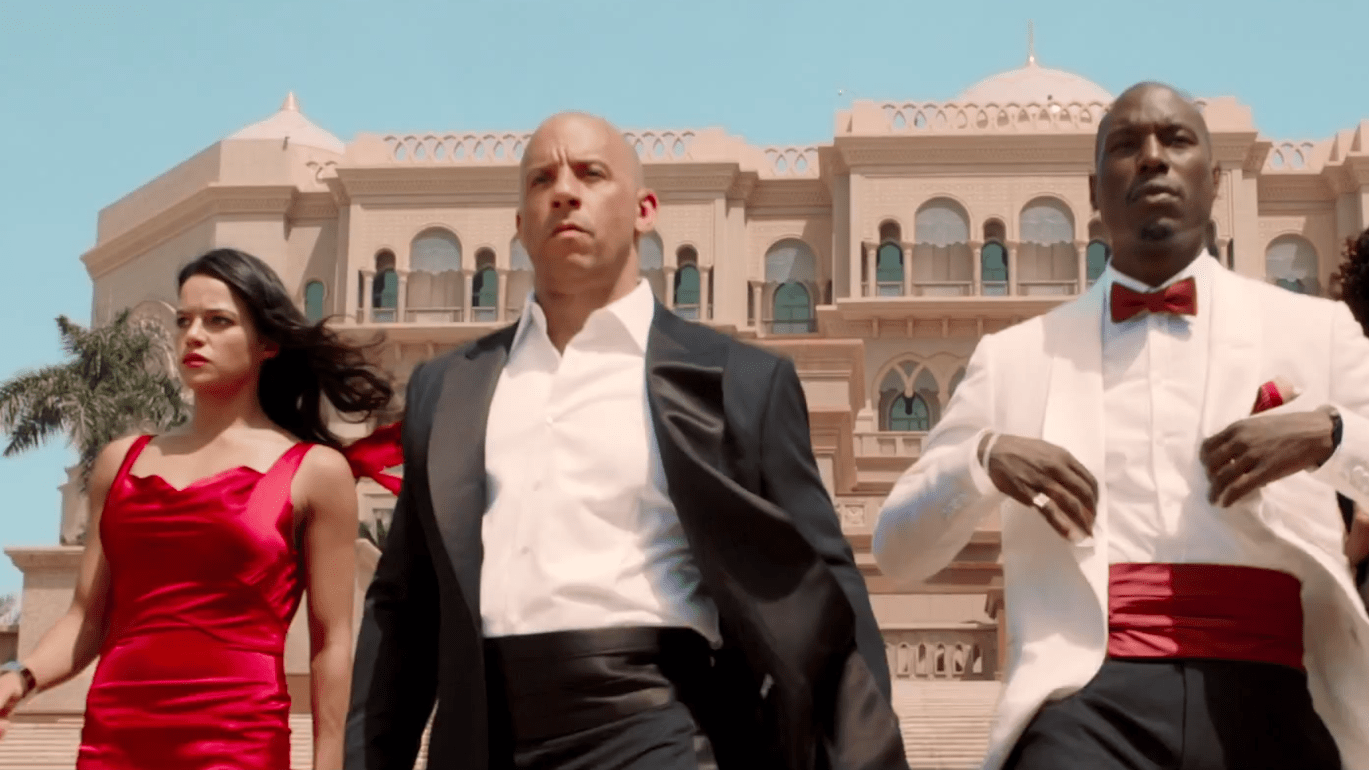 You need but two words to describe the oceans of money Furious 7 earned this weekend: God. Damn. The pope probably should’ve postponed Easter, because this weekend there was only one house of worship packed with true believers screaming “Hallelujah!” at every skull-pounding, biceps-cast-shredding, gear-stripping second of automobile-erotic ecstasy. I quote from the Book of Fast: “On the seventh sequel, the Dom rested, looked at the destruction he had wrought, and said, ‘It is good.’”

Yes, Furious 7 essentially made all the money this weekend, and its flying car demolished all records: The North American box office jumped an astounding 31 percent over 2014. Dominic Toretto and the Family helped make this the best Easter weekend domestic haul ever, at $218 million, beating 2010’s record of $177.6 million by multiple car lengths. After a couple of slow weekends, 2015’s domestic box office is running 6.4 percent over last year. So, take your victory lap, Vin, and start planning that Oscar campaign. There is only one winner this weekend, because every other movie choked on its exhaust, and that is —

So here’s the number that has Hollywood drooling, and it’s as sexy as they get: $143.6 million. That’s how much Furious 7 earned at the domestic box office in just three days of release (including some Thursday previews).1 Screw inflation, that’s far and away the biggest April opening ever, making the previous record holder, Captain America: The Winter Soldier, and its $95 million look as pigeon-chested as a pre-enhancement Steve Rogers. Analysts had expected a big $115 million opening since Universal went all in with Furious 7, its widest release ever at 4,004 theaters in North America and 10,500 theaters internationally. But Furious 7 nitrous-boosted its way into the record books: the ninth-biggest Friday opening of all time, the second-largest pre-summer opening after only The Hunger Games, and the ninth-biggest three-day weekend opening of all time. Not bad for an accidental franchise that almost got relegated to the dustbin of straight-to-DVD history.

And that’s just here in the good ol’ US of A plus Canada, which we all know has increasingly dimmed as the bright, money-spewing center of the movie universe. Reading the global returns makes Furious 7 look like an even brighter supernova. That’s the number that’s truly heart-stopping: $384 million worldwide in one freakin’ weekend. You’d think Diesel et al were selling iPhones. Furious 7’s $240 million international take makes it the third-biggest foreign opening after the Harry Potter finale and Pirates of the Caribbean: On Stranger Tides. Even on its massive $190 million budget, Furious 7 is racing into the black, and the film has yet to open in the heavyweight territories of China, Russia, or Japan. Without any real blockbuster competition roadblocking it until Avengers: Age of Ultron in May, and with all of those “fuck, yeah!” reviews, Furious 7 could quite conceivably end up as the 20th member of the elite $1 billion club, with Dom’s spunky Echo Park drag-racing crew joining the likes of the Avengers, James Bond, and Optimus Prime.

So how do you explain such meteoric success? Obviously, the emotional draw of Paul Walker’s final performance contributed to the film’s haul, but we’ll say no more lest Ludacris give us the stink eye. And Universal basically marketed the hell out of it. However, what’s really fun to note, as the Wall Street Journal’s Ben Fritz did, is that nonwhite audiences turbocharged the film. The audience was 37 percent Hispanic, 25 percent Caucasian, 24 percent African American, 10 percent Asian, and 4 percent “other,” probably because unlike standard Hollywood fare, the Furious cast actually resembles 21st-century America. It turns out that’s one way to get people to care about movies again. Well, that and supercars leaping between skyscrapers in Abu Dhabi.

(The Comparative) Losers: The Easter Leftovers

Furious 7 had the weekend all to itself as a new release, although technically, there were other movies playing in theaters this weekend. You may have noticed them as you waited in line for the next IMAX showing of Furious 7. They did make some money in its wake, but in the same sense that your dog “feasted” on wayward chunks of Easter ham that fell from the dinner table. It’s really hard to call winners or losers here. The biggest greasy chunk of excess cash fell into Home’s ravenous maw: It took second place, earning a respectable $27.4 million domestic and pushing its domestic total to $95.6 million. (And Katzenberg and friends are grateful for every errant scrap.) In third, Get Hard suffered a much worse drop of 62 percent, which would earn it Loser status if not for how relatively cheap it was to make in the first place. And Cinderella showed some serious princess staying power with $10.3 million added to its $167.3 million bounty. Even more impressive, it’s heading toward a $400 million global total and god knows how much more ancillary gold throughout Disney’s magic kingdom of merchandise.2 Lastly, Noah Baumbach’s indie gem of generational angst While We’re Young expanded into 34 theaters, earning $493,000 for a not-too-shabby $14,500 per-screen average. On the other hand, that’s only slightly less than Furious 7 earned per screen on Friday alone — in over 4,000 theaters.

Furious 7 and the Four Movies It Shared Its Leftovers With