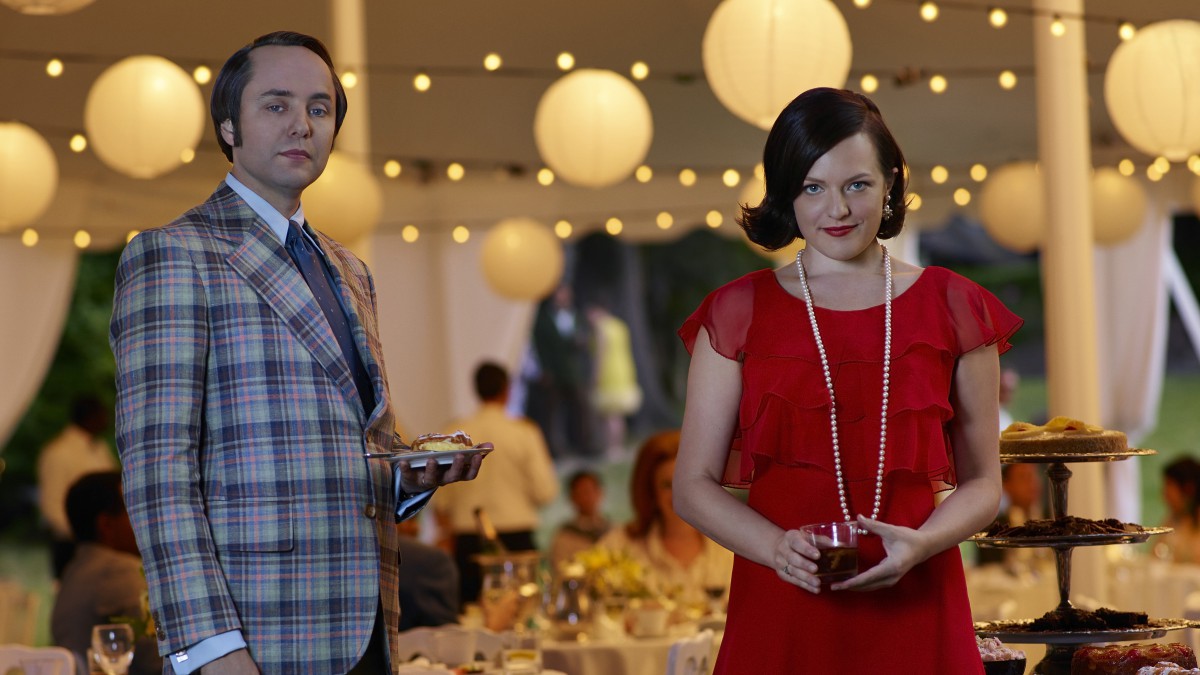 “Do you know, my dear sir, what disillusionment is?” he asked in low, urgent tones, both hands leaning on his stick. “Not a miscarriage in small, unimportant matters, but the great and general disappointment which everything, all of life, has in store?”

The carousel goes round and round, but you end up right where you began. At the start of the final season1 of Mad Men, Don Draper is living all the phases of his life at once: the high-powered executive, the fur coat salesman, the boy who grew up in a brothel. Don has finally absorbed Dick Whitman back into his body like a vanishing twin. The opening sequence is purposely dislocating: It could be any year. But it’s still Don Draper all the way. He’s smoking a cigarette indoors, undressing a girl with his words, same as it ever was.

After trying to stoke the dying embers of his marriage to Megan, Don has reset to bachelorhood. He’s back in top form again, entertaining a squadron of big-haired party girls at a diner with Roger Sterling and Roger’s new mustache. Everything is as it ought to be — stabilized, Hollanderized, on the level, and straight down the line. Roger is a dick to the waitress in what could be considered a nod to 1970’s Five Easy Pieces, but I’m fairly sure Roger has been a dick to waitresses his entire life. Boundless entitlement comes naturally to him. Don, on the other hand, is a true gentleman. He’s lived in New York long enough to know that you bring over a cake when a family is sitting shivah.

It’s the same old song at work, too. Pete Campbell is back. It turns out he couldn’t keep his California dream going for long. Joan may finally have more power, but she still gets no respect. She and Peggy get to host the meeting with McCann Erickson about Topaz panty hose, but they have to do it with smiles plastered on. Joan has to hold back from offering anything resembling her real opinion about the proto-tech bros who keep lobbing unfunny double entendres at her. The guy who tells Joan that she should be in the brassiere business deserves to get punched in the face, but Joan and Peggy have to smile tightly and nod approvingly at these morons’ jokes. Joan’s small protest is to stop smiling. In the elevator afterward, Peggy and Joan fail to connect yet again. Peggy is unable to hold back from saying that Joan “can’t have it both ways” — that she can’t be sexy selectively. Joan is pissed, understandably, given that her body is not her fault. In the words of Jessica Simpson’s creepy dad, Joe: “She’s got double D’s! You can’t cover those suckers up!” Whenever Joan complains about being oversexualized and objectified, Peggy rolls her eyes and acts as if Joan is trying to humblebrag. Joan regains her sense of power by going shopping at a department store and being curt to the girl who works there — in a job Joan used to have.

Peggy is still her own worst enemy. She pessimistically turns down her coworker Mathis’s offer to set her up with his brother-in-law, assuming the guy will be a dud, only to change her mind at the last minute. The impulsive move proves to have been the right one: Her date is played by Devon Gummersall, a.k.a. Brian Krakow from My So-Called Life, which is so perfect. What makes this new beau promising is that he’s a fan of take-no-guff broads like Peggy. He even thinks her intelligence and bossiness are hot. Maybe Mathis’s wife does have a knack for this.

Peggy can’t help but be her tactless self — when her date, Stevie, refuses to speak up about getting the wrong entrée, she needles him about it and the whole relationship seems doomed. But as soon as he tells Peggy that Mathis recommended he go out with her because she’s “funny and fearless,” she suddenly becomes those things. Elisabeth Moss does a great little head swivel that subtly conveys Peggy’s epiphany. She opens the doors again. And maybe there’s a reason she usually keeps them closed so tightly, because, boy, do they come flying off the hinges. She decides to fly to Paris with Stevie after admitting that she’s never taken a vacation. Then, stymied by her lack of a passport, they push the plan forward a few weeks. By the next day, though, she’s already backtracking after being teased at work. She could never do something so whimsically romantic — i.e., potentially foolish and possibly humiliating. But that’s the whole thrill, the potential for crushing emotional failure or ecstatic victory. Be the girl who goes to Paris, Peggy!

The episode is all about impulsive moves, the kind that are sometimes rooted in a deeper regret for the road not taken, the novel not written, “the life not lived.” Ken Cosgrove’s firing is just one of the plot’s motivators, but it feels indicative of a central theme. As good as all the characters are at their jobs, working in advertising is not meaningful or satisfying for basically anyone on the show. It’s a cynical business, built around selling lies rather than the truth, appearances rather than realities. Everyone at the firm looks successful, but who among them is even mildly happy? Don and Peggy take pride in their creative work, but any satisfaction it gives them dissipates as soon as the pitch is over. They’re happy only cyclically, in pursuit: absorbed mid-process, searching endlessly for the right words and the perfect images to go with them. The only person who really seems to love his job is Pete, god bless him. And even his massive wealth is a burden on him. (He might have to buy an apartment building to hold on to any of his money, and then he’s got to be a landlord!) Pete tells Ken that nobody wants to read a naturalistic depiction of the degenerate landscape of advertising. He suggests that Ken write something escapist.

I thought of Ken’s book in terms of Matthew Weiner’s own career arc. He wrote the Mad Men pilot while working on the Ted Danson sitcom Becker, and it got him a job writing on the final seasons of The Sopranos. Weiner wrote the Mad Men pilot, “Smoke Gets in Your Eyes,” in 1999. The show began its run in 2007. He’s been writing his great American novel for us over the last seven seasons. Ken can’t take the leap, even with his wife saying that she can support them financially while he writes a book for people “who don’t have the guts to live their dream.” Cosgrove signs up to work as a cog for Dow Chemical, making a deal with the devils who make Agent Orange and napalm B — to work in plastics, like a Benjamin Braddock who stayed the course. It feels like a tragedy. No sooner than Ken opens the window, he closes it again.

All of the characters are trapped in their own personal time loops. You’d think an endless parade of fur-coated models would be enough to distract Don, but it seems like Megan has probably put him off any long-term ambition about making a beautiful young vision into his mate. As always, Don secretly craves not glamour but its inverse twin: grit. He takes a hungover nap in his office and wakes up after a dream about Rachel, possibly spurred by seeing the waitress (Elizabeth Reaser) at the Nighthawks diner who resembles her and any number of other tough, dark-haired women Don has fallen for. Don has secretly always preferred the companionship of women who are, like the girls he grew up with, streetwise. Seldom one to hold back from following through on a sexual impulse, he goes back to see the waitress, who turns out to be a working girl. Smoking in the back alley, they reenact Don’s first kiss with Rachel, Vertigo-style.

Peggy Lee’s version of “Is That All There Is?” is such a Mad Men song that when I heard it playing during “Severance,” I got déjà vu, positive I had heard it on the show before, or maybe on The Sopranos. When the waitress character appeared onscreen, I thought for a moment that she was Lorraine Bracco. The whole episode was full of moments like that, little glitches in reality, like the morning dream from which you wake feeling a sense of purpose that melts into oblivion upon contact with real air. “Is That All There Is?” is based on a Thomas Mann short story called “Disillusionment,” in which a man recounts the many times real life has failed to live up to his fantasies: “I went out into that supposedly so wonderful life, craving just one, one single experience which should correspond to my great expectations. God help me, I have never had it.”

The déjà vu I felt was based at least somewhat on a real memory; the song is in Martin Scorsese’s After Hours, the director’s 1985 take on Dante’s Inferno. After Hours is a paranoid fever dream concerning one cog in a corporate machine who gets trapped on the raggedy streets of New York all night, thrust into the city’s grimy belly. The Inferno is a favorite of Don Draper’s, and not coincidentally, it’s composed of nesting circles. Ride the painted pony; let the spinning wheel glide.