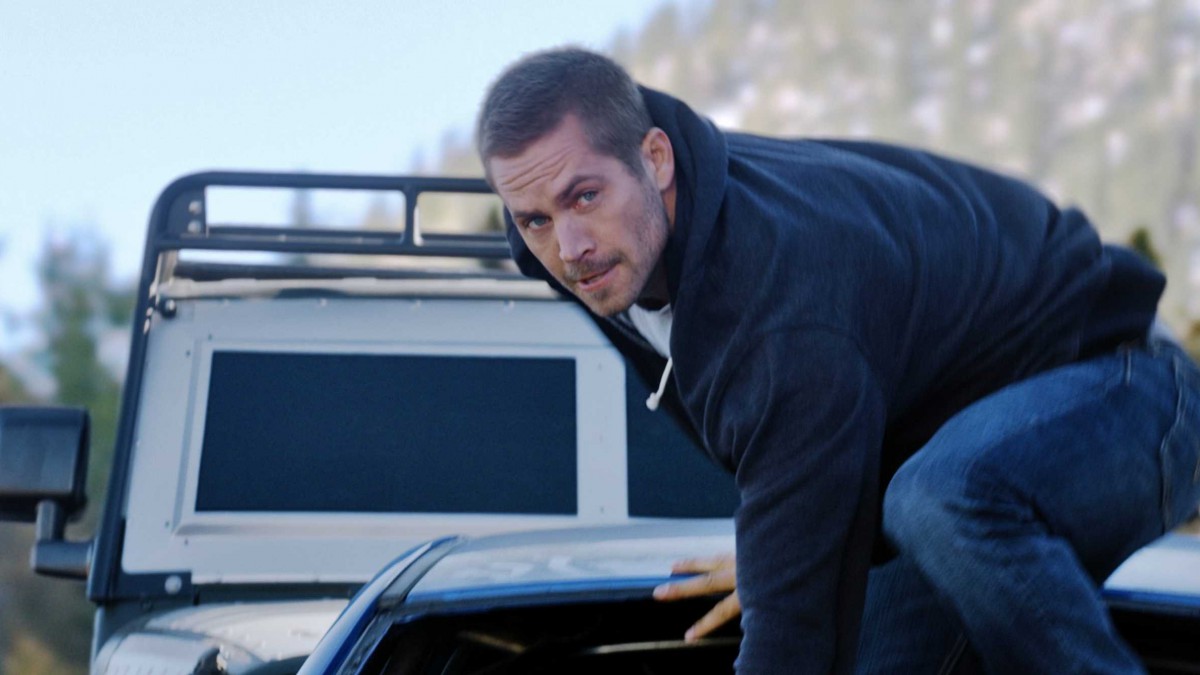 … And in the seventh part, they refused to die. Still. It’s true that two early scenes in Furious 7 occur at cemeteries. But by the second trip, Roman (Tyrese Gibson) makes everyone in his government-sponsored car club promise that this is it for graveyards, and it is. Two characters go tumbling down a mountain in an armored car, and a couple of scenes later are chatting on a beach. When one speeding car needs to deposit its hotly pursued passenger into another speeding car, the transfer requires each vehicle to swerve into a parallel formation so that the body can slip from one window through the other. (It took longer to type that than it did to watch.) A physicist might say of the deposited, “See you at the morgue.” But physics are to the Fast & Furious movies what term limits are to dictators: something to be flouted. That transfer is but one of the dozen or so incidents in this movie that drop your jaw, steal your breath, and make you want to say “I do.”

Characters, of course, have died in these films. They just don’t stay dead. And there’s a glorious soapiness to some of that. Furious 7 has Letty (Michelle Rodriguez) standing over her own grave, struggling to remember all the driving and snarling she’d previously done. She tells Dom (Vin Diesel) she needs time for self-rediscovery, which would seem to entail relearning that this bald, muscle-bound man with the Anthony Quinn mumbles is her husband.

This series has resurrected both itself — Installment 3 (the silly, slinky, hilariously homoerotic, and only modestly lucrative Tokyo Drift) had virtually nothing to do with Parts 1 and 2 — and Diesel’s career. But of all the phoenixes to rise from Fast & Furious rubble, none has been as uncanny as Paul Walker. In late 2013, he died in a car accident unrelated to the filming of this movie. His appearance as a fully integrated member of the narrative nonsense epitomizes movie magic. I, at least, can’t tell the real Walker from the digital composite. And that seems miraculous. There was a time when that lack of distinction between him and something less organically animate would mark the occasion for a joke. He was not a great actor. But these movies didn’t require that of him. They required the shine of an action star, and in this world, he shone.

Walker, of course, was the original centerpiece of these movies. In the first installment, he was the chill, white LAPD officer from whose point of view we were meant to see Dom’s multicultural ring of road-racing Los Angeles car thieves. He’d infiltrated the ring, and, by the first film’s end, he was in love with Dom’s sister, Mia (Jordana Brewster), and helping the gang elude capture. By the second installment, without Diesel, he was in a plot that narratively handcuffed him to Gibson, who plays an ex-con. They did white-guy-black-guy action comedy. The longer the series went on, the more racially and ethnically panoramic it became. By 2011’s Fast Five, without any self-congratulation and without demoting Walker, the point of view had expanded. He’d become an equal player in an action melodrama that was once primarily about him.

Fourteen years later, Walker’s Brian O’Conner is pressuring himself to abandon high-velocity vengeance. In a movie full of good gags and throwaway lines, the one of Walker revving the engine of what turns out to be a minivan traveling only 2 feet is the best. He and Mia are about to become parents again. The explosive arrival of Deckard Shaw (Jason Statham), the brother of the previous movie’s not-entirely-vanquished Eurobaddie (I’m telling you, this series doesn’t believe in death — or at least checking toe tags), puts Dom & Co. on the defensive. Shaw kills a member of Dom’s crew, narrowly misses taking out Dom, Brian, and Mia and their son, and hospitalizes the government security agent and Friend of Fast & Furious Luke Hobbs (Dwayne Johnson) in a classically impossible fight at Hobbs’s workplace. (The audience’s applause for the slamming of Statham through a glass coffee table was third only to the first close-up of Walker and the climactic shattering of an arm cast.)

The O’Conners are shipped to the Dominican Republic, to the compound of a guy played by the music star Romeo Santos. Dom wants Shaw as badly as Shaw wants him. But first, covert-operations muckety-muck Frank Petty (Kurt Russell) convinces Dom to rescue a hacker named Ramsey, who’s invented a global tracking device that — well, it does what such surveillance devices do in movies but with faster upload speeds. Petty has taken the trouble to assemble Dom’s team — Brian, Roman, Letty, and the engineer and technologist Tej (Ludacris) — and has given them free reign over the toys in his agency’s hangar-size emporium of military-industrial fun. This mission requires, via another crazy stunt, dropping onto a road in, of all places, the Caucasus Mountains for the thwarting of the African nut job (Djimon Hounsou) who wants the hacker and the tracker. Furious 7 is the writer Chris Morgan’s fifth of these movies. Hats off to his gonzo plotting and geo-racial sense of humor.

If Dom & Co. can rescue the hacker and retrieve the device, Petty will allow them to use it to catch and crush Shaw. Really, the frequency with which Shaw just arrives mid-action-sequence is very funny and extremely stupid. Apparently, Shaw’s tracking device is set to “Dom.” In any case, the chasing and running lead to the sand and skyscrapers of Abu Dhabi, then back to the streets of Los Angeles. In each city, the wanton, ovation-worthy demolition barely lets up.

You can spend a lifetime watching movies and see very little that approximates the craftsmanship and ingenuity of the stunt work in these films. When this series began, as The Fast & the Furious, visual logic and navigability were scarce. The first film got by on energy, freshness, and having pulled back a curtain on a microcosm that became a world that became a universe. It was an action film that crossed the “nothin’ but a good time” spirit of a beach movie with the turf-war menace of a biker gang. But by the second film, reinventing what an action sequence could do and be had become, and remains, a priority. For that sequence in the Caucasus, the team deploys evasive formations. In Los Angeles, they do lateral handoffs with a human being. Each sequence thrives on a careful mix of running plays and winging it. The corporeal and vehicular choreography, aided by some visual trickery, operates at a level of competency that raises the bar for an action sequence. When Brian and Dom go careering through all three Jumeirah at Etihad Towers, the looks on the faces of Diesel and Walker match the looks on ours.

Taking over for Justin Lin, the director James Wan moves here from the gotcha-horror galaxy (Saw, Insidious, The Conjuring). It’s a better fit than it might sound, since Wan has prioritized visual coherence in action sequences of every kind. He seems to know that a kind of clarity is the surest path to both suspense and surprise. Cameras are pinned to parachutes and tipping-over sofas. But all of that motion rarely results in clutter. The four credited editors settled on clean-looking assemblages of shots. All I want from an action sequence are camera angles wide enough to keep track of bodies and cars (and choppers and drones, as the case is here), and editing that doesn’t feel as if it’s doing all the work. In these movies, you can see the orchestration in the stunts. They’ve been worked out and considered, not discovered — rescued, really — in editing.

Some of the editing is just playful. The first time Diesel and Statham go driving head-on at each other (there are at least three), the film cuts rapidly from Diesel’s face to Statham’s, so that you can’t tell them apart. It’s a hugely ejaculatory moment. These bald men are plowing toward one another, but the screen makes them look like two testicles about to blow. Does it strain plausibility that Letty could hold off the high-octane arm-and-leg work of Ronda Rousey and that Brian could go forearm-to-forearm with Tony Jaa twice and live to tell? It does, indeed. But that’s just part of the magic. In Dubai, cars fly, a character played by Tyrese can’t sing, and when Johnson, who still gets the best lines and is more tanklike than ever, is laid up, his hospital stay fails to reveal that he’s actually a T-800. More light magic. It’s the heavier variety that sticks with you, like when the main cast looks on as Brian frolics with his wife and son. It’s a happy, strangely moving occasion, since the underlying message and ensuing montage is clear: The séance must conclude. If there are to be more of these films, Walker won’t be in them. But these compose a kind of afterlife. His character’s decision to trade one family for another gives the movie an unexpected gravitas. Who would have thought that a series addicted to the high of movement could also summon a solemnity that leaves you moved?

Songs of the Week: The ‘Fast & Furious’ Soundtracks Edition