Songs of the Week: The ‘Fast & Furious’ Soundtracks Edition 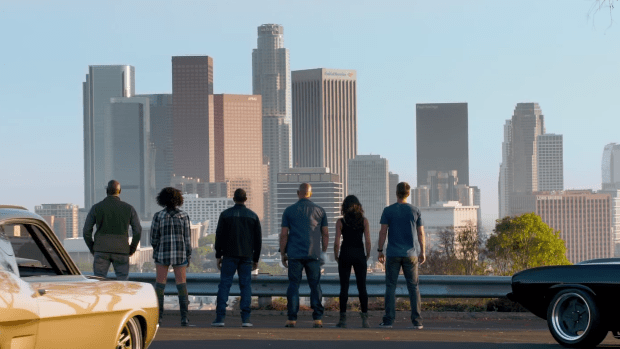 What’s up, gearheads?! It’s your boy, Dave, or as my friends call me, D $krilla. Wait, hold up, hold up, hold up. I got that wrong. See, I don’t have friends. I got family, and my Grantland family asked me to pop in and do Songs of the Week today, but I only said yes under one condition: that I got to write about the classic soundtracks from the Fast & Furious franchise. So, to honor the momentous occasion of Furious 7‘s release, I’ve spotlighted one song from each soundtrack to form the ultimate, no-busters-allowed playlist.

Did you know that this incredibly dumb song is on the soundtrack to the first film? It’s too perfect, isn’t it? What two pop culture artifacts scream “early 2000s” more than rap-rock and the original The Fast and the Furious? I am convinced that Jordana Brewster actually still lives in 2001 and uses a time machine to visit us here in “the future,” because when was the last time you saw her outside of one of these movies? Exactly. Jordana Brewster is a Terminator sent to enslave mankind.

Before you ask, the answer is yes. DMX barks on this song. A lot. There’s no official video, but the above fan edit cobbles together choice moments from the careers of all the participants, including plenty of shots of dudes popping wheelies and dogs chewing on old tires. What I’m trying to say is, this video is SICK.

Before Ludacris went Hollywood and got his teeth capped, he co-starred in just about everyone’s least favorite Fast & Furious movie. As was customary for pop music acts in films, he contributed a song to the soundtrack: “Act a Fool.”

Keep your eyes open for the numerous guest appearances in this video. Tyrese, Paul Walker, Eva Mendes, Devon Aoki, director John Singleton, and a million other people I probably missed all pop in at some point to remind you that this is actually an ad for a movie. Luda drives a car here that happens to be sporting some clown-ass fake Louis Vuitton paint job. The camera is sure to linger over the pattern so we all get a good look before he goes racing past us. Even in 2003, is there anyone who thought that was cool? It looks like Paris Hilton threw up on the hood of your car. Come on, son.

I heard they’re doing some crazy shit in Tokyo. This song is by Teriyaki Boyz, a Japanese hip-hop collective that worked with just about every important producer 10 years ago. I don’t think they’re making music anymore, but I could be wrong. If you know the whereabouts of the Teriyaki Boys or you are a member of the Teriyaki Boys, please hit me up on Twitter. I have much to discuss with you.

The Fast & Furious soundtrack was released on Star Trak, so Pharrell’s fingerprints are all over these songs. The album itself leans heavily on Latin music, so Pitbull showing up is inevitable. Mr. Worldwide and Fast & Furious go together like Dom and Brian — perfectly. The video is clips from the movie interspersed with first-person shaky cam footage of Pitbull’s night out at the clubs. It’s like you get to be Pitbull for four minutes, which is a personal fantasy of mine. How do I get Oculus Rift to do a Pitbull simulator? Is that too much to ask for?

Han lives, if only in our hearts. I miss you, brother. You really did live your life a quarter mile at a time, and for that, I salute you.

By Fast 6, movie soundtracks had become irrelevant. I guess this song was popular in the U.K., but as songs featuring Wiz Khalifa from movies go, I’d rather listen to that Juicy J track from the goddamn Ninja Turtles movie than this song. This fan video is great, though, because it’s a montage of clips from the entire franchise — even 2 Fast 2 Furious, if you can believe that.

This song really gets me, man. Furious 7 is going to be an emotional roller coaster ride that I might not be prepared for. Just listening to this song gets me all choked up for “one last ride.” Like the song says, we will ride on forever and ride out together.

I hope you enjoyed this musical road trip through the Fast & Furious movies. Before I race off into the sunset, let me leave you with this one last bit of wisdom from professional philosopher Dominic Toretto: “You can have any brew you want, as long as it’s a Corona.” Wow. That really says it all, doesn’t it?