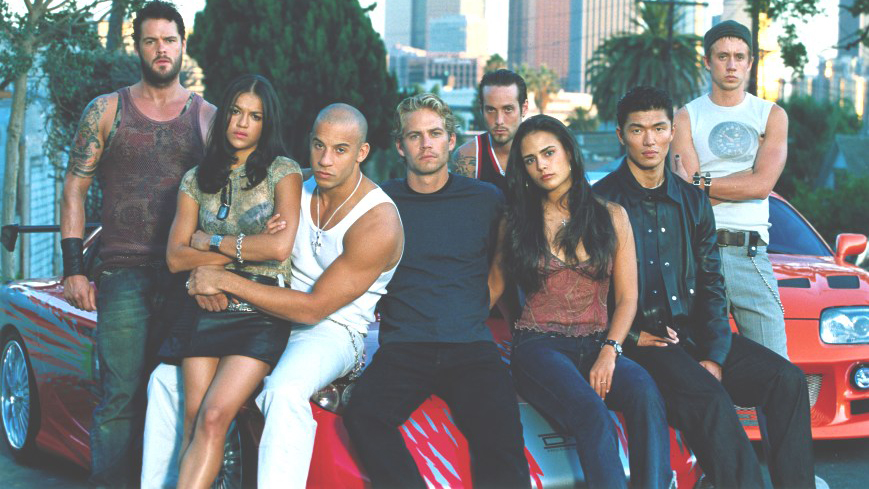 An underappreciated epoch of modern cinema draws to a close this Friday with the release of Furious 7. The Fast & Furious series — heralded by our own Wesley Morris as “the most progressive force in Hollywood today” — may go on, but with the devastating loss of Paul Walker, it won’t be the same. It won’t be the family. I’m not even sure how to get through Furious 7, set immediately after the apparent death of Han, preceded by the death of Gisele, without using popcorn napkins to dab away tears.

It’s incredible to think that the first FF movie was released in 2001. These have been a part of all our lives for so long. There is a floppy disk in the first one! It goes into a Compaq computer! Even Vin Diesel looked boyish in 2001, and they lit him like he was doing a cologne ad. And can I call 2001 Paul Walker luminous? 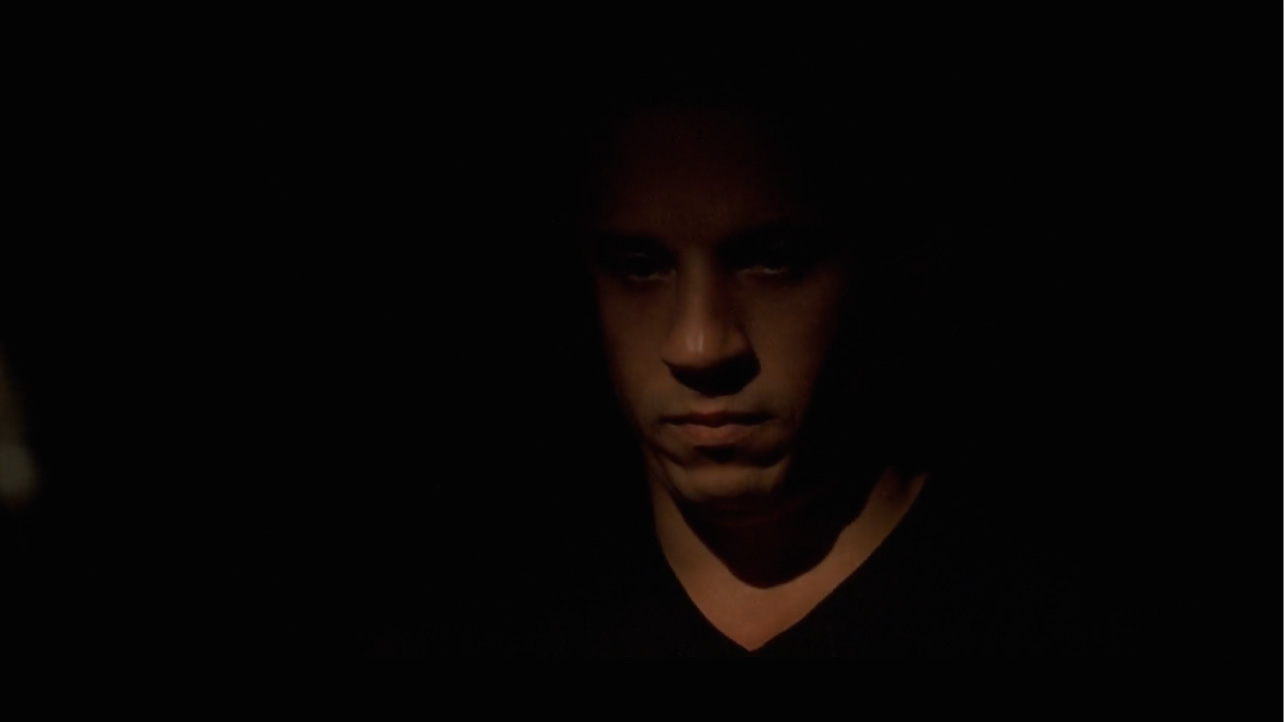 We can count the hours, at this point, until the movie’s release. Until then, let’s celebrate the purloined bank vaults full of delightful implausibilities this franchise has bestowed on a grateful human race. Just picture Sarah McLachlan crooning “I Will Remember You” over soft-focus footage of massive municipal destruction in Rio, and think on the good times.

The king of the quip in the Furiverse is, without peer, Dwayne Johnson. Maybe it’s a background in wrestling1 that enables him to say things like “Make sure you got your funderwear on” and “They hit like thunder and disappear like smoke” with a straight face. So let’s assume he’s got roughly the first 20 or 30 slots on this list and give some other actors a shot at appreciation.

1.“You know what they say, Stasiak: If you want the career-changing big fish, you gotta be willing to put on the big boy panties and sail out to the deep water.” —Brian, Fast & Furious 62

3. “You’re representing me now. What you think, I’m gonna let you roll in a Hyundai?” —Han, Tokyo Drift

4. “Make sure you bring that body by the garage later on so we can work on that front end of yours.” —Tej, 2 Fast 2 Furious

5. “I heard they’re looking for a chef down at this animal shelter.” —Roman, Fast Five

7. “I’m here to offer you a peaceful solution. A race.” —Sean, Tokyo Drift

9. “One thing for sure is we know they wanted this car.” —Dom; “Cause something’s in it!” —Brian, Fast Five

11. “What’s up with this fool? What is he, sandwich-crazy?” —Vince, The Fast and the Furious

The Seven Most Radical Stunts

Hahaha, remember when jumping from one moving vehicle onto another was an impressive thing?

1. All the overhead shots of chases and races, all the sinuous lines of cars in Tokyo Drift. It’s downright balletic.

2. Dom using the stolen bank vault as a medieval flail to take out cars on the bridge in Fast Five.

3. The Rock-Diesel throwdown in Fast Five. Like watching an armoire tackle a refrigerator.

4. The bit at the end of the inexplicably titled Fast & Furious when Dom rears his car up on his back wheels and Brian holds on to an escaping bad guy’s leg so that Dom can hit him with the car. COMBO MOVE.

5. The drawbridge race in 2 Fast. It’s straight out of a video game. But not GTA. No, this is more Mario Kart, with Brian hitting the power mushroom at just the right time.

6. Dom and Letty flying across a bridge mid-car-crash in Fast 6, over a chasm so high he could’ve caught her up on all her amnesia before they hit bottom.

7. The slo-mo way Dom’s dad’s beast of a car flips at the end of the first FF after it misses the train but not the truck. 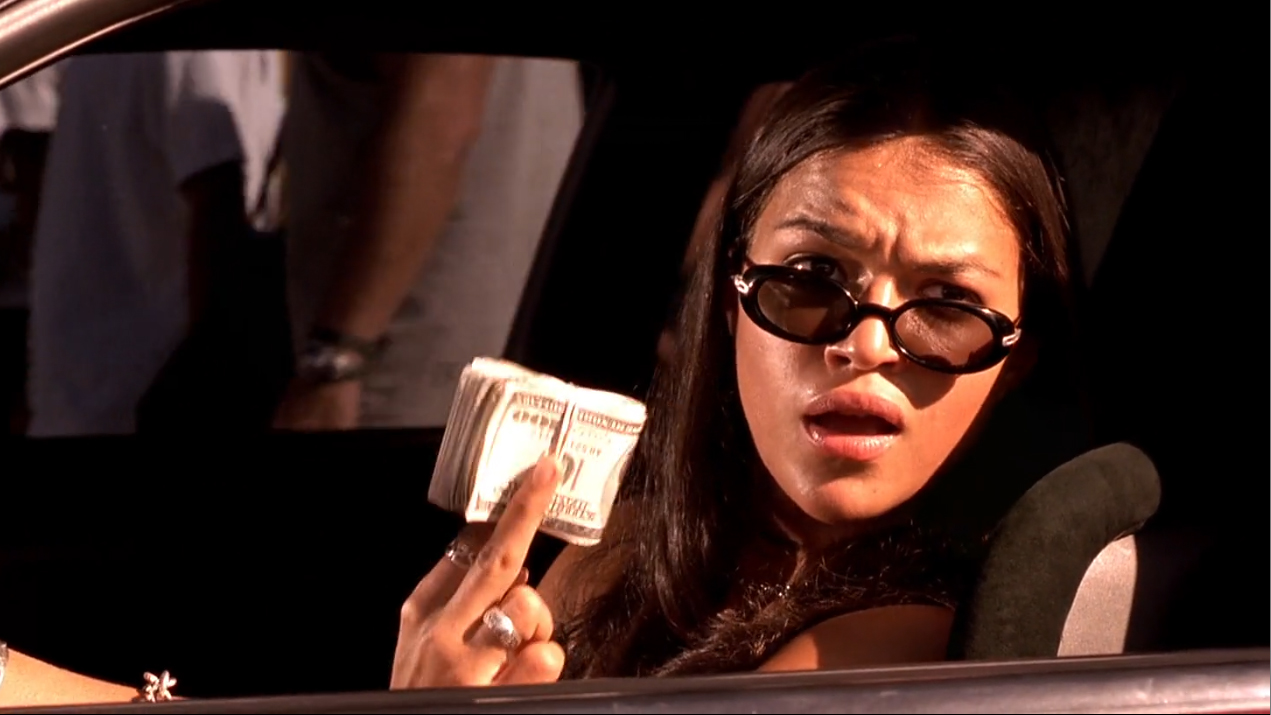 1. The way everyone in street-racing culture seems to conduct all transactions with different sizes of rubber-banded rolls of cash that they apparently carry at all times.

2. The shots in the first FF where they go into kind of an after-school special slo-mo style that makes you think this was either all about to be revealed as a dream sequence or everyone was about to bust through a wormhole, which would’ve made for a very different series of films.

4. Dom’s return in Fast & Furious, filmed in a manner that makes it seem like he just drove his car through the ocean and out of the Port of Los Angeles, which he probably could do — we’re not here to box him in.

5. Mia’s line in Fast Five, “Guys, you’ve got every corrupt cop in Rio on your tail.” THE NORMAL ONES ARE COOL WITH THIS, DON’T WORRY.

6. The negative-image Family run by Owen Shaw in Fast 6, and how all their roles get carefully outlined by Roman, just in case nobody in the audience picked up on it.

7. The apparently incredibly necessary portion of Fast 6 in which Brian has to go back undercover, IN PRISON, and the fact that if he gets caught he will be sent to … prison.

8. Dom driving out the front of a flaming cargo plane in Fast 6.

What? You’re gonna demand gritty realism of a movie series that began with Mia agreeing to spend the night with a man who lives in a garage and sleeps on a twin bed?

1. The house party after the cops break up the street race in FF1: No one would willingly drink out of a beer bottle that had just been in Vince’s mouth, even after wiping off the neck of the bottle.

2. Paul Walker and Tyrese have complexions that are far too exquisite for their characters to have possibly grown up in Barstow. Where’s the sun-blasting?

4. Welp, we’ve flipped an entire prison bus for the sole purpose of springing Dom from a sentence he willingly gave himself up for, but with no casualties, which is a totally realistic outcome. We should do that again sometime!

5. The butt handprint Gisele gets from Reyes to get the safe open in Fast Five. We’ll accept that this is possible scientifically, but that swimsuit does not cover a lot of her butt. How did he conceivably just hit fabric?

6. Mia’s Fast Five revelation of “I’m pregnant” not being immediately followed by Brian and Dom falling to the floor in horror that they’d just taken her on a ROOFTOP PARKOUR CHASE TO EVADE INTERNATIONAL AGENTS. 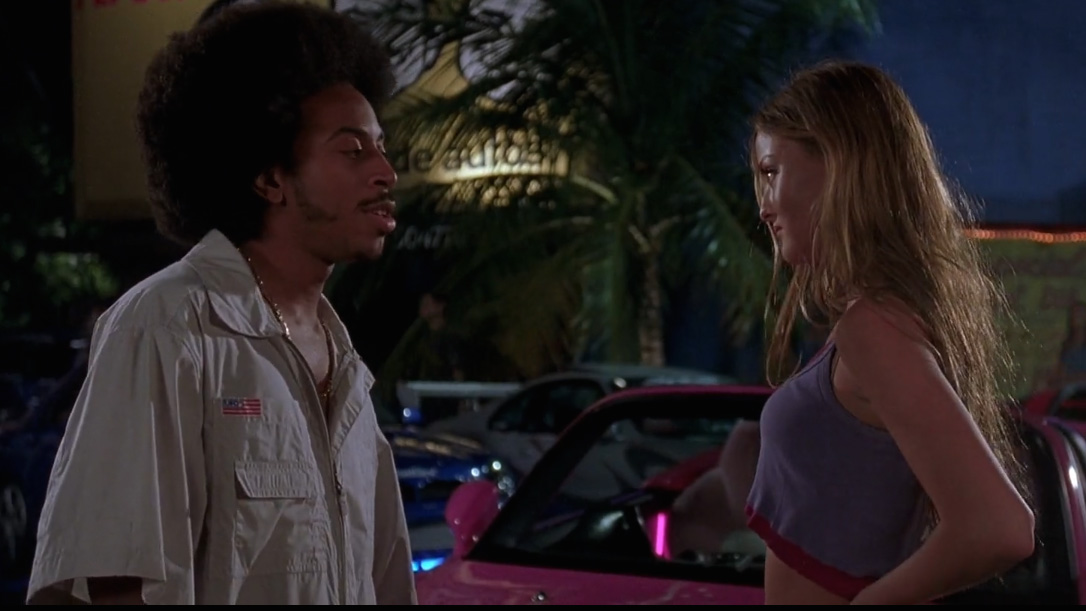 1. Dom’s four-person crew rolling up in red, yellow, blue, and white cars in the first movie like they’re his personal Pac-Man ghosts. (Jesse is Sue in this scenario.)

2. Vince having to be mean to Brian in the first movie while wearing a mesh tank top over a second opaque tank top.

3. Devon Aoki’s hair in 2 Fast, which is the only appropriate hair on display for the lifestyle in the entire series save for the bald guys: It looks like she drives with the top down, hangs out at the beach all day, and gets a deep-conditioning mask only when she remembers, which isn’t often. It’s a mess. It’s perfect.

4. Tej’s crew thinking to bring along road cones to place next to the ROAD CLOSED signs in 2 Fast. So diligent!

5. The hijacked semi driver’s tender love for his iguana in Fast 4.

7. The moment in Fast 6 when Hobbs shoots a vending machine open for Roman, and it is not played for laughs.

The Three Most Talented Craftspeople From the Furiverse

1. The choreographer of all of the car ballet in Tokyo Drift.

2. The costumer who picks out all the outfits for the girls at the street races.

3. The costumer who gets to decide what brand of close-fitting T-shirts all the male protagonists wear, each of which I’m confident comes with a backstory.

1. The Fast and the Furious, during the very first hijacking sequence: “Well, at least they’re wearing helmets.”

2. 2 Fast 2 Furious, the scene in which Tej raises the drawbridge during a street race: “LUDA. LUDA. THAT IS DANGEROUS. LUDA, STOP THAT.”

3. Tokyo Drift, the montage in which Sean’s dad prepares his son to enter a street race against a murderous gangster in a giant-ass old Mustang they have rebuilt themselves: “GREAT PARENTING. GREAT PARENTING.”

4. Fast & Furious, the whole first part of the movie, in which everyone but Brian is hijacking fuel tankers to make a living and Brian is working for the federal government: “OK, it’s been eight years in real time and five years in the movie, and no one invested their winnings in that time? Get a money market account, y’all. And do you seriously think Brian’s been taking the right deductions at work?”

5. Fast Five: “Is that garage where they’re practicing the robbery properly ventilated?”

6. Fast & Furious 6: “Why do so many of these people think it’s acceptable to walk around with open wounds on their faces? Clean that! That’s going to scar!”

7. Fast & Furious 6, the very end, when Hobbs and Elena are leaving the barbecue: “This is a travesty of etiquette. Ask them to stay! Who raised you? That man stood down the British military for you! Offer him some ribs!” 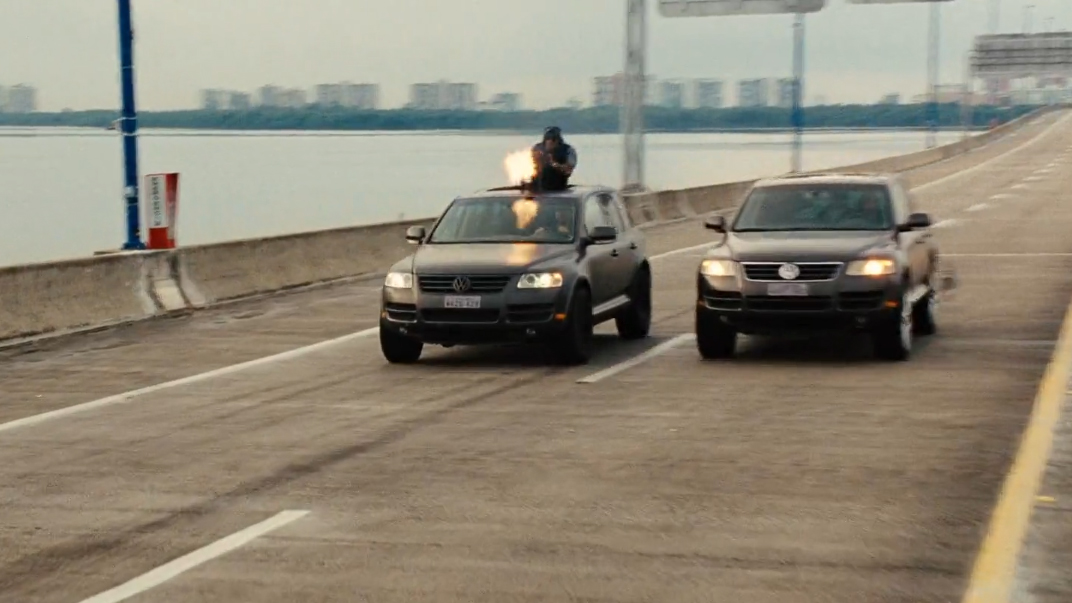 1. Roman’s demolition derby car with the painted-on maw in 2 Fast.

3. The Orange Julius–decorated car driven in 2 Fast by Amaury Nolasco, who is playing a character named Orange Julius.

4. The semi truck with the iguana hood ornament in the opening sequence of Fast 4. 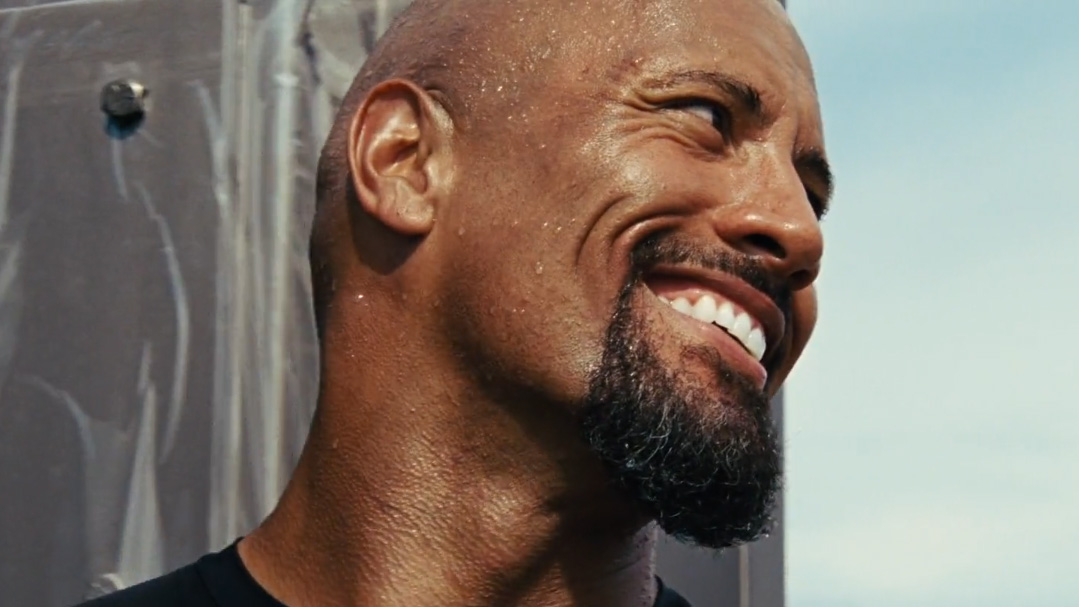 1. What is the protocol if two street racers show up for the same race with the same color car? Does one of them have to trade with somebody else?

2. Why do all the street races happen with the windows down? Don’t they want to be aerodynamic?

3. What do the characters think of the NOS Energy Drink? Is it like their favorite thing or do they view it as a creeping corporatization of their culture?

4. So in 2 Fast, when Luda/Tej insist they have to have four cars to race, what’s the deal with that? Is Tej’s street-racing concern like that of a restaurant that won’t seat you until your entire party is present?

5. What happens to all of the discarded gas tankers Dom and Letty are stealing in Fast & Furious once they’re emptied of gas?

6. Throughout Fast Five, why is The Rock continually so much visibly sweatier than Vin Diesel? Does he have a personal on-set mister/oiler?

7. There is a deleted scene in Fast Five in which The Rock slaps a taxi like he would a horse’s flank. Why on earth was that removed from the theatrical release?

8. Sean’s IM handle in Tokyo Drift is “bama_boy,” yet in this entire car-centric film there is not a single ROLL TIDE to be heard. Why?

9. This series doesn’t get enough credit for creating some of the greatest sequel-naming memes of all time, but not sticking with the rumored working title Fast & Fourious was a huge mistake. What scared the studio off? At least try a tiny bit and call it Battle of Nos Angeles or something.

10. In absolute seriousness: How many more hours of these films are going to spool out without a single character driving into a fruit stand?