Crabtree on the Shelf

Sweatin’ With the Oldie 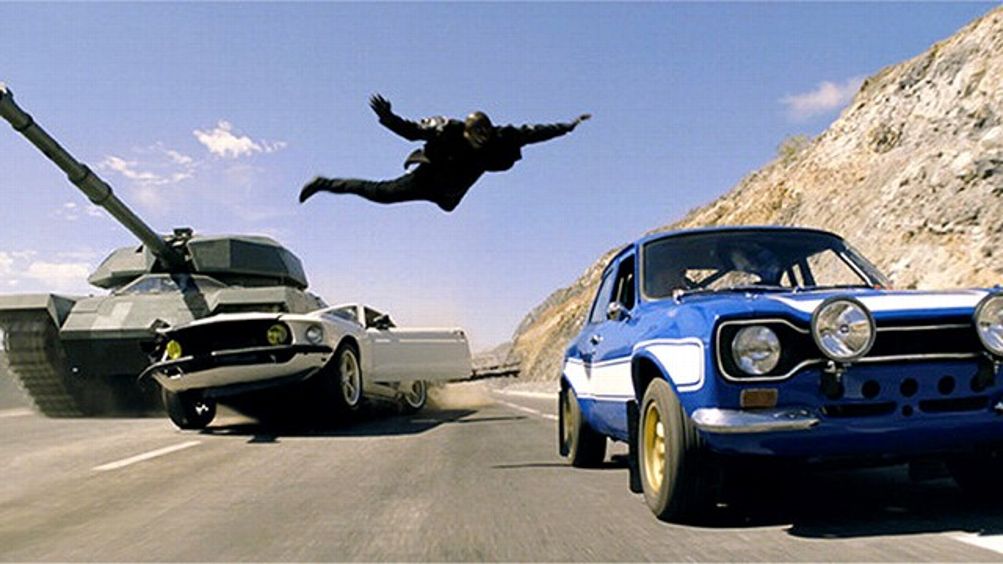 Has any action-movie series ever had an odder commercial trajectory than Fast & Furious? The first one was a nitrous-juiced Point Break rip-off that made a star out of Vin Diesel and “that guy from the Fast & Furious movie” out of zwieback hunk Paul Walker. When Diesel and director Rob Cohen both passed on the Miami-set 2003 sequel, 2 Fast 2 Furious, the job of banging the Hot Wheels together went to (Academy Award nominee!) John Singleton, who turned in a competent buddy picture notable mostly for adding characters played by Ludacris and Tyrese Gibson to the F&F universe. (The Furiverse? Can we start saying that yet?)

The Fast and The Furious: Tokyo Drift followed three years later. Walker’s not in it; Diesel makes a split-second cameo. It’s still the best actual film of the series — the last one that even tries to be plausible as a portrayal of a real-world car culture, the last one in which the cars mostly obey the laws of physics, the only one with Juelz Santana and Atari Teenage Riot and N.E.R.D. on the soundtrack and Bow Wow in the supporting cast playing somebody named “Twinkie.” The weak link was leading man Lucas Black, a cornpone goober who made Walker seem like a Brandoesque electromagnet by comparison. The film was released theatrically, but the absence of both leads from the original gave the proceedings a strong straight-to-DVD vibe. And when Drift turned out to be the lowest-grossing installment in the series, that seemed like the destiny of this franchise — the Bring It On/Starship Troopers supermarket-spinner-rack zone, with ever-cheaper self-replicating carsploitation packaged as Fast & Furious Colon Whatever Dangerous Car Thing the Kids Are Cuckoo for This Year every 16 months until infinity.

What’s important in retrospect about Tokyo Drift is that it marked the franchise debut of director Justin Lin. There are only so many ways to cut back and forth between a Skittles-colored Nissan coupe barrel-rolling sideways toward the camera and an actor making OH SHIIIIIT faces behind the wheel, and Lin — previously best known for the great Better Luck Tomorrow, a microbudget Asian Mean Streets — turned out to be really good at all of them. In 2009’s Fast & Furious, he and screenwriter Chris Morgan brought back Diesel as gearhead hijacker Dominic Toretto and Walker as now-ex-cop Brian O’Connor, original cast members Michelle Rodriguez and Jordana Brewster as their love interests, and even Sung Kang, reprising the role of Black’s mentor from Tokyo Drift, a character the Internet insists was named “Han Seoul-Oh.” Even if that’s right it’s wrong.

Han dies a fiery on-camera death at the end of Drift; the F&F brain trust solved this seemingly intractable time paradox by deciding that all the other Fast movies, including Fast & Furious 6, were actually Tokyo Drift prequels, correctly realizing that Kang’s laconic Alain Delon charisma was worth bending time and space for. Fast & Furious made a pile of money, and 2011’s superlative Fast Five made even more. The posters for Fast 6, in theaters this week, say “ALL ROADS LEAD TO THIS”; it’s a pretty ballsy way to market the sixth installment of a series whose seventh film is already in production. In all likelihood they’ll keep making these things until Earth runs out of fossil fuels, each time scaling up the gravity of the trouble our heroes find themselves in and the implausibility of it being resolvable only by driving a souped-up vintage Dodge in an awesomely reckless fashion.

Another interesting thing about these movies is that they’re really stupid. I say that with nothing but admiration. Complex world-building? Pious power-and-responsibility sermonizing? Character development? I CAN’T HEAR YOU OVER THE SOUND OF THIS SOUPED-UP ENGINE REVVING. No action franchise is more up-front about how all it wants to do is zoom-zoom-zoom-zoom and take your money; story- and characterwise, no franchise does more with less. So how’s this one? It’s great. It’s crack. It gets you really high. It’s automatically at least 17 percent less fun than Fast Five because Fast Five was an Ocean’s-on-taurine heist film and this one’s a Die Hard–esque gotta-stop-the-terrorists drama, but it’s no less crammed with twisted metal pirouetting in the air and people with special skills saying “I got this!” into walkie-talkies.

Maybe too full. Lin has called this one his “Robert Altman ensemble piece,” and as completely ridiculous statements go, that one is pretty accurate. A lot of returning characters get spotlight beats that feel gratuitous (you show that stuffy British car auctioneer what’s what, Ludacris!) and many of the female characters get almost no beats at all. Elsa Pataky and Jordana Brewster in particular show up just long enough to stay on the Toretto Gang dental plan.

Like its predecessors, Fast 6 labors under the illusion that Tyrese is funny and Vin Diesel making his Serious Face and speaking Zen-and-the-art-of-muscle-car-maintenance koans isn’t hilarious. Morgan’s script is the usual chopped salad of tough-guy clichés. (“You want the career-changing big fish,” Paul Walker tells another character, “you gotta put on the big-boy panties and sail out to the deep water,” a mixed metaphor that really grabs the brass ring and slam-dunks it.) And as a rule the scenes where characters feel feelings are deathly. We’re supposed to have developed an emotional attachment to these wisecracking crash-test dummies over the course of the last 12 years; I’m not there yet, but your mileage may vary.

So it’s not a flawless film. But it’s a near-flawless Fast & Furious film. Like Five, it benefits greatly from the wry presence of Dwayne Johnson, who’s as good at finding wit in dialogue seemingly devoid of it as he is at head-butting people. He returns as Hobbs, from the totally-made-up-sounding-but-apparently-real Diplomatic Security Service, a government agency whose responsibilities in the Furiverse include apprehending fugitives and spouting exposition. Hobbs likes to greet people by reciting their credentials and/or their character motivations (“Your husband was an officer who was gunned down in the favela. Six months later you joined the force.”) Hobbs has read your file. Impressive stuff. Hobbs and his new partner, played by Haywire‘s Gina Carano, are hunting Owen Shaw, a rogue British special-forces officer who’s one hard-to-obtain computer chip away from completing a communication-network-disabling superweapon called the Nightshade Device. Shaw and his associates strike like lightning and vanish like smoke, Hobbs says, and there’s only one crew of drivers badass enough to take him down. Hint: It’s not the Shriners.

What Shaw (ably if generically played by The Hobbit‘s Luke Evans) plans to do with said weapon is not a thing this movie wishes us to worry our pretty heads much about. He is a bad guy. Ergo he cannot be allowed to get the stuff to make the thing. We know he’s a bad guy because he blows up buildings full of innocent people, but more importantly we know he’s a bad guy because he’s constantly — seriously, it happens like three times — giving speeches about how his personal code is “precision” and telling people that he views the members of his team (kind of a black-hat curly-mustache mirror image of our heroes) as merely moving parts that he’s not unafraid to sacrifice and replace in the name of getting the job done. The Toretto crew, of course, is more than just a crew — they’re a fist-bumping, bro-hugging, barbecue-having, grace-saying family, and they’ve always got each other’s backs, and they never leave a man or woman behind — which becomes an issue once Michelle Rodriguez’s Letty, blown up in Fast & Furious, turns up alive, with amnesia, working for Shaw.

You know where this is going. The family is threatened; the family is reunited. But first, there are chases — including one through London at night, involving Batmobile-style armored Formula One cars, that ranks with the best of the series. After that, Walker takes a pointless side trip back to L.A. while everybody else hangs out in England, and the pacing suffers, but then it’s off to Spain, where — eventually, inevitably — some tactical genius of a NATO commander decides that the best way to protect the MacGuffin from Shaw and his crack team of hijackers is to put it on a truck and move it by convoy. If that sounds idiotic, I refer you to my favorite moment of meta-Fast-ness, from Fast Five. Pataky, studying a folder full of evidence, says, “This doesn’t make sense,” and Johnson says, “Here’s what makes sense,” grabs the folder, and tosses it in the air. There’s a reason it’s not called The Facts and the Figure-ous, Officer Logical!

I don’t think I’m entering spoiler territory by telling you that another road chase ensues, one that’s less ingeniously imagined than the Looney Tunes–worthy bank-vault-as-wrecking-ball set piece that closed out Fast Five, but with way more bloodless and unremarked-upon civilian deaths. The grand finale involves a bunch of nitrous-powered titanium grappling hooks, a cargo plane taxiing down a runway so endless it must stretch halfway to Switzerland, and the heroic demise of a tertiary character. And then, just when you’re gathering your snack waste and fishing for your car keys, you’re T-boned by a pre-credits coda that (1) resolves some chronological inconsistencies in what I will apologize in advance for calling the Fast & Furious mythology, and (2) introduces us to the villain of Fast 7, due out in 2014, which means it should be half-shot by the time I finish typing this sentence. Because Lin was unwilling to shoot the next film on that timetable, the director will be Saw‘s James Wan; the villain will be played by a modern action-movie mainstay whose personal brand is synonymous with a certain kind of unabashed and often glorious accelerator-stomping fan service. He’ll fit right in.