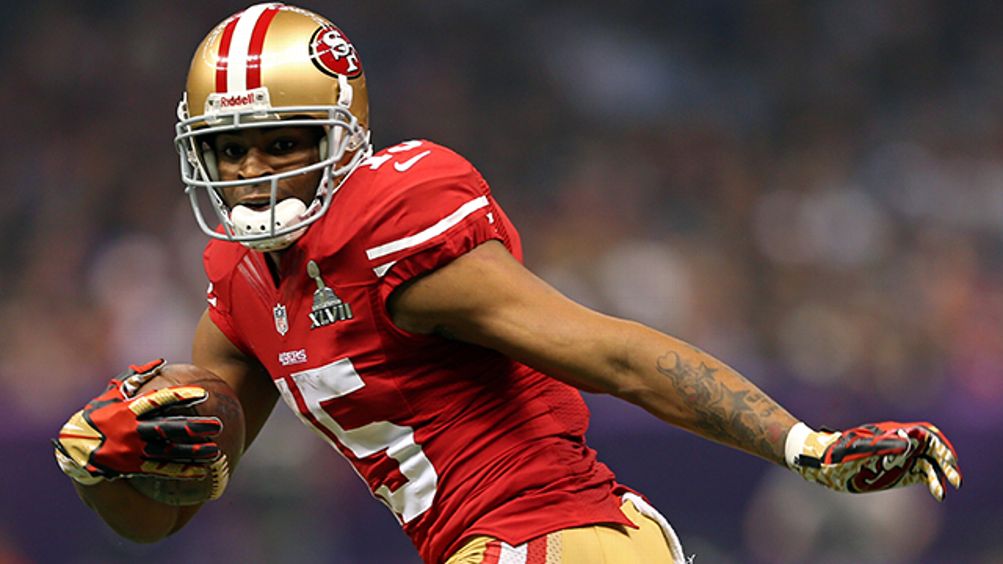 Defenses spent the second half of the regular season and the postseason desperately trying to find a way to stop the offense of the San Francisco 49ers. Colin Kaepernick usually made them look like this in the process. Outside of Kaepernick, the 49ers player whose stock rose most dramatically during those final 10 games was wide receiver Michael Crabtree, who averaged 85 receiving yards for the last seven games of the season with Kaepernick in tow, which was seventh-best in the league for those weeks. Big things seemed to be on the horizon for Crabtree in 2013, but the torn Achilles he suffered during organized team activities this week has all but ended his season before it began. It’s a blow for the Niners, and it comes from a foe that they’ve somehow managed to duck: the injury bug.

The rise of the 49ers into a superteam over the past two years is rightly credited to the impressive coaching of Jim Harbaugh and the improvements of their talented young core of players. There’s a third factor that’s often gone ignored, and it’s health. San Francisco has been a staggeringly healthy team the past two seasons, with the Football Outsiders AGL metric ranking them as literally the healthiest team in football in 2012. Heck, sometimes, even the few injuries they’ve had have helped; Alex Smith’s concussion created a spot for Kaepernick. The few traumatic long-term injuries they’ve dealt with have been to bit parts: Second wideouts Josh Morgan (2011) and Mario Manningham (2012) have missed half-seasons, while rotation linebacker Parys Haralson missed the entire 2012 campaign after tearing his triceps during the preseason. This team just hasn’t had to deal with this sort of injury to this valuable of a player during the Harbaugh era.

As healthy as the Niners have been, and as talented as their roster is, they’ve shown just how sensitive they can be to a well-placed injury during the playoffs in each of the past two seasons. Ted Ginn’s knee injury during the 2011 postseason forced rookie Kyle Williams into punt return duty against the Giants in the NFC Championship Game, and Williams’s two subsequent fumbles were enough to swing the game to the Giants. Then, last year, the torn triceps suffered by key defensive lineman Justin Smith against the Patriots in Week 15 both limited his ability and shut down the San Francisco pass rush, with Aldon Smith failing to record a single post–Justin Smith–injury sack after producing 19.5 of them during the first 13 games of the 2012 season. San Francisco is deep, but it’s not injury-proof.

Coincidentally, the team that the 49ers might look at with some hope right about now is the same one that dropped a loss on them in the Super Bowl. The Ravens were able to win the Super Bowl last year even after losing one of their best players to an offseason torn Achilles — pass rusher Terrell Suggs. Baltimore didn’t make a significant move to replace Suggs and still managed to produce a competent defense, with the likes of Paul Kruger and Courtney Upshaw playing in expanded roles in Suggs’s absence. Many (including me) expected Suggs to miss the entire season, but he came back and actually suited up for 12 games, including all four playoff tilts. That’s a promising note for 49ers fans hoping to see Crabtree on the field before the 2014 season, but it overstates the linebacker’s impact. Suggs was a shell of his normal self during that 12-game stretch, as he suffered a partial biceps tear and produced just four sacks. If anything, that sack total might overstate his actual ability on the field during that time frame. Crabtree is likely to return at some point during the 2013 season, but it’s difficult to imagine that he will be anything like the guy who lit up opposing secondaries with Kaepernick throwing him the ball last year.

Replacing Crabtree is a question of degree. Sure, the 49ers have other guys who can suit up and line up in Crabtree’s absence. They’ll still be able to throw the ball; as the Redskins showed last year, a team with an effective read-option attack can still get guys like Leonard Hankerson and Aldrick Robinson open for big plays. But unless they can go out and find a Pro Bowl wideout they won’t be able to replace the guy Crabtree became once Kaepernick took over as the starter. The table below takes Crabtree’s numbers under Harbaugh, splits them by starting quarterback, and then prorates them for a 16-game season. In other words, it illustrates the gigantic leap Crabtree took with Smith on the bench:

Roughly, Crabtree’s level of performance went from Brandon Lloyd to Dez Bryant overnight. Unfortunately, while the 49ers can go out into the free-agent market and sign the real Brandon Lloyd if they so desire, players of Bryant’s caliber simply aren’t available.

Can Anquan Boldin be a suitable replacement for Crabtree? Probably not. Boldin’s postseason heroics were truly impressive, but his three seasons in Baltimore produced an average regular-season line of 62 catches, 882 yards, and five touchdowns. (And if you think he specifically turns it on in the postseason, note that he averaged four catches and 59 yards per postseason game before the 2012 campaign.) Boldin is himself an injury risk and lacks both the acceleration before the snap and skills after the catch to properly emulate Crabtree.

Instead, the workload is more likely to fall on wideout A.J. Jenkins, the team’s first-round pick out of Illinois in the 2012 draft. Jenkins failed to catch even a single pass during his rookie season, playing just 35 offensive snaps altogether. It’s rather ignominious to make it through your entire rookie season as a first-rounder without catching a pass, but remember that Kaepernick touched the ball just seven times during his rookie campaign in 2011. Kaepernick’s success after basically redshirting doesn’t assure us that Jenkins will be a star, but it makes that idea easier to swallow.

The other guy who will need to step up? Tight end Vernon Davis, who saw his targets simply disappear with Kaepernick under (OK, around) center. After Kaepernick’s impressive win over the Bears on national television in a game where Davis went for 83 yards, the hulking tight end caught a total of six passes for 61 yards over the final six regular-season games. It helps that he finished the postseason with consecutive 100-yard receiving games against the Falcons and Ravens, but Davis will need to carry that sort of workload and performance around for an entire season. One 10-yard catch per game simply won’t cut it without Crabtree around.

In all, this isn’t an insurmountable loss for the 49ers and their offense, but it’s a legitimate one. San Francisco will very likely struggle with finding a replacement for Crabtree, but it will get enough out of its passing game to (in concert with its excellent rushing attack) get by in 2013. It remains to be seen whether Crabtree’s injury is the sort of rare accident that every team has to endure in one year or another with their star player, or whether it’s a sign of things to come with the 49ers’ season.