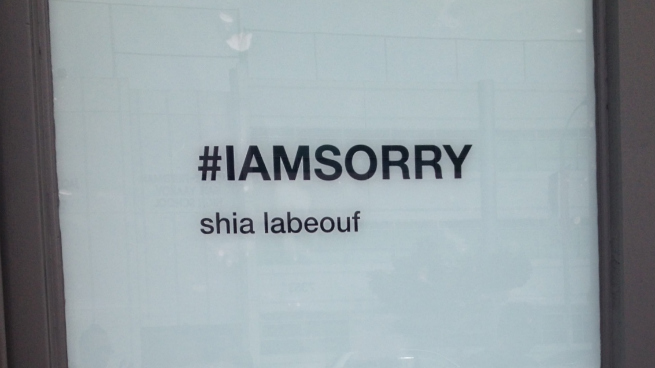 In honor of Shia LaBeouf, I considered plagiarizing one of the dozens of identical blog posts about his new performance art project, #IAMSORRY, now in residence at the Cohen Gallery on Beverly Boulevard through Sunday, from 11 a.m. to 6 p.m. every day. Half the people in the relatively short line for #IAMSORRY were bloggers, and the gallery is located across the street from BuzzFeed’s L.A. office. I shared sidewalk space with a blogger from The Daily Beast, and heard I had just missed The Huffington Post. All of these bloggers were presumably coming directly from the recently shut-down Dumb Starbucks in Los Feliz, a viral performance art project by Nathan Fielder of Nathan for You, which attracted a similarly media-heavy crowd over the weekend.

#IAMSORRY is a collaboration between LaBeouf, a Finnish performance artist named Nastja Säde Rönkkö, and British artist Luke Turner. Turner’s online CV says his “work investigates the operations and oscillations of art, exploring ideas of presence and excess.” Turner and LaBeouf collaborated on a “Metamodernist Manifesto” that they posted online. Here are the first three rules from the manifesto:

1. We recognize oscillation to be the natural order of the world.

2. We must liberate ourselves from the inertia resulting from a century of modernist ideological naivety and the cynical insincerity of its antonymous bastard child.

3. Movement shall henceforth be enabled by way of an oscillation between positions, with diametrically opposed ideas operating like the pulsating polarities of a colossal electric machine, propelling the world into action.

This will make perfect sense to you if you went to art school. For the rest of you wondering what the obsession with “oscillation” is all about, you might need a refresher course on International Art English. The laws of the manifesto get progressively more flowery as the list goes on, getting to the (relative) point in the seventh: “Just as science strives for poetic elegance, artists might assume a quest for truth. All information is grounds for knowledge, whether empirical or aphoristic, no matter its truth-value. We should embrace the scientific-poetic synthesis and informed naivety of a magical realism. Error breeds sense.” The last sentence is a call to arms: “We must go forth and oscillate!” 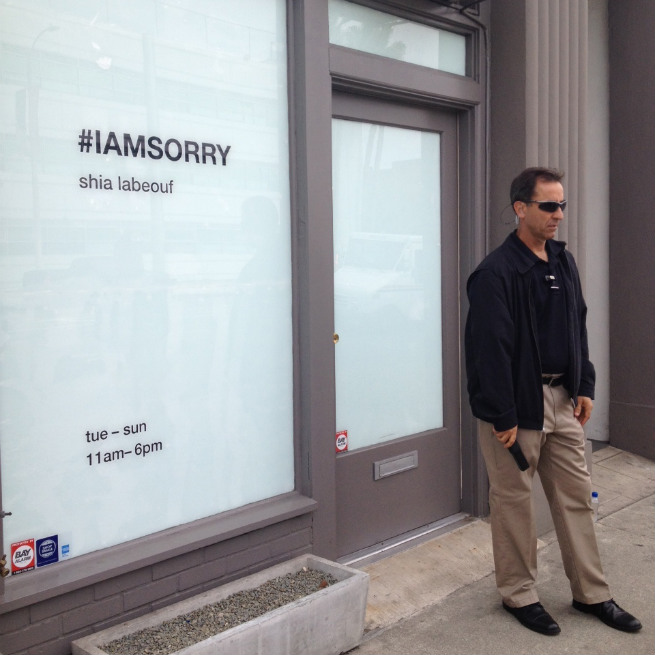 Shia’s oscillation at the Cohen Gallery involves a front door protected by a security guard, who waves an unimposing metal detector wand over you before letting you into the gallery space when a gallery girl knocks on the door from the inside. Visitors must enter one at a time, although what lurks inside is not as cool as James Turrell’s Perpetual Cell (currently at LACMA!). I waited in the line out front with some friends and a group of about six other people. There were some girls who seemed like they might be Shia fans, a guy in a UCB hoodie, and the aforementioned cluster of bloggers. You could recognize the other bloggers by their aura of ambivalence about the whole thing, as they have already been covering the Shia story as it has unfolded, bit by viral bit.

On the drive there I saw an ad on a Hollywood storefront for a youth production of The Wizard of Oz, with a promise that “everyone gets a part!” Child acting is one of Hollywood’s most unsettling and stalwart industries. Shirley Temple, the most famous child star of all time who also accomplished the unlikely feat of becoming a normal adult, died the day that former Disney Channel kid Shia began his performance piece at the Hollywood gallery.

I didn’t see anyone coming back out through the front door of the gallery, adding to the haunted house quality of the whole thing. Deciding I didn’t want to get murdered inside a mystery machine, I opted to scroll through posts on my smartphone by other writers who had already been inside. They all told the same story: There’s a table with objects on it; you choose one and then go behind a curtain into a smaller room where Shia sits in a chair opposite you wearing his now infamous paper-bag hat that reads “I AM NOT FAMOUS ANYMORE.” The line was pretty consistently five or six people, but dwindled down to three at one point. Shia is apparently not as popular as Dumb Starbucks. 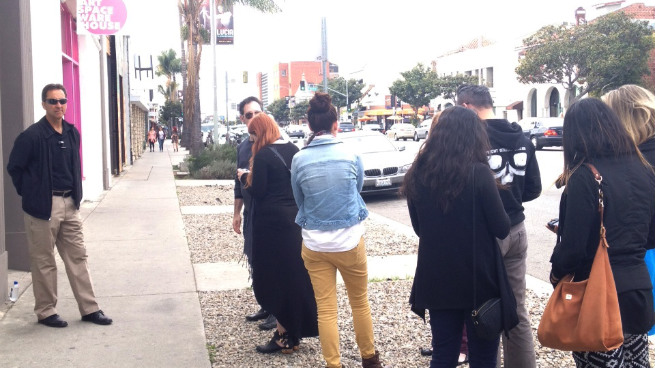 Armed with spoiler knowledge, I waited my turn, which took about an hour. When I got inside, I saw the table and the objects others had described, which resembled a magic store in an RPG (specifically Zelda). There was a pink ukulele, a bowl of Hershey’s kisses, a Daniel Clowes book, some pliers, and a vase of flowers. There was no photography allowed. I did not see the “bowl of tweets” some had mentioned, which made me feel like I was losing a memory game. I was ushered by a young woman (Rönkkö) sitting behind the object table into the Chamber of Shiacrets.

Shia, as promised, was sitting in a chair with his Unknown Comedian paper bag mask. There were pronounced wet stains underneath the eyeholes, and his hands were on the table. I brought in a stem of daisies and laid it on the table. Then we had a staring contest for as long as I could tolerate, during which he teared up. Shia is either a big Marina Abramovic fan, or he thinks he is inventing performance art on the spot. Given that he is working with actual artists, I’m guessing it’s the former. I considered breaking the rules and taking a picture, but I felt too weird about it, which seemed like an intentional part of the piece. If Shia is now going to plagiarize famous performance art, I have a bad feeling he’s about to get really into Vito Acconci.

Shia’s foray into performance art is as annoying and obvious as Joaquin Phoenix’s, but slightly less obnoxious than James Franco’s, only because there is less of it. As a project about celebrity, authenticity, and who owns culture in the digital age, it’s pretty freshman year. As a stunt to promote Shia’s new brand as an avant-garde artist, it could be a lot worse. At best, it makes you think about what counts as art, albeit in a stonery “What does art mean, man?” way. Is blogging performance art? Is Twitter performance art? Is getting up every morning and going to bed each night performance art? Shia’s tears are crocodile tears, the tears of a child actor whose first trick was learning to cry on cue. As an audition, it’s impressive. As a work of art for the ages, it has nothing on Ghost World or Ice Haven.