We Went There: The Dumb Buzz of Dumb Starbucks 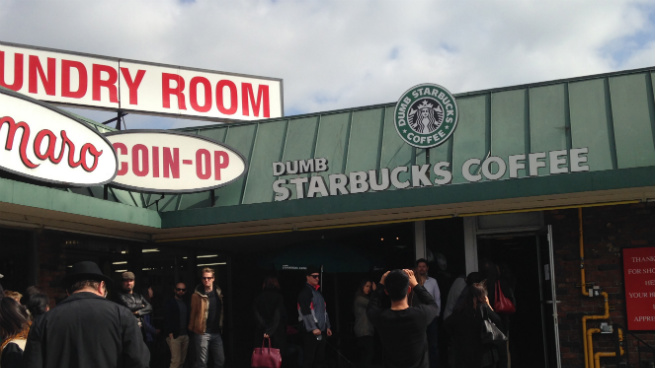 Or at least I tried to go there, twice. I stood in line for 15 minutes yesterday morning and then, figuring naively that evening would be less crowded at a place where only coffee was being served (for free, I might add), for an hour and a half before the joint closed down at 5:30 p.m. I still think this counts as having gone there, though, because I feel really enlightened by the experience and I am now wearing a $10 bootleg Dumb Starbucks hat. I spent more cumulative time in line for a Dumb Starbucks coffee than I have during my most fulfilling Real Starbucks job interviews and first meetings with strangers. You don’t have to drink the coffee to absorb the Dumb. I did it just by waiting in line.

That sounds too negative. This was actually a pleasant experience. News of Dumb Starbucks built up over the weekend: It was a coffee shop that had opened in Los Feliz, in a strip mall containing a coin-op laundromat and a Thai restaurant. Everything about it resembled an average-intelligence Starbucks — the same siren logo, the same white font across the green awning, the (dumb) cups and the (dumb) Frappuccinos and the (dumb) CD collection. The free coffee was offered in honor of its grand opening, supposedly, though it may have something to do with Dumb Starbucks sidestepping trademark laws. Dumb Starbucks has posted a FAQ (posted here by KPCC) in its store with the disclaimer that it is “not affiliated in any way with Starbucks Corporation” and that “by adding the word ‘dumb,’ we are technically ‘making fun’ of Starbucks, which allows us to use their trademarks under a law known as ‘fair use.’ […] We love Starbucks and look up to them as role models.” If something about this seems suspicious, well, Dumb Starbucks has anticipated that as well, and asks you to leave that “for our lawyers to worry about […] All you need to do is enjoy our delicious coffee!” I would have, if you had stayed open until six like you did on Saturday! It was free! Nothing is so delicious as a free thing. 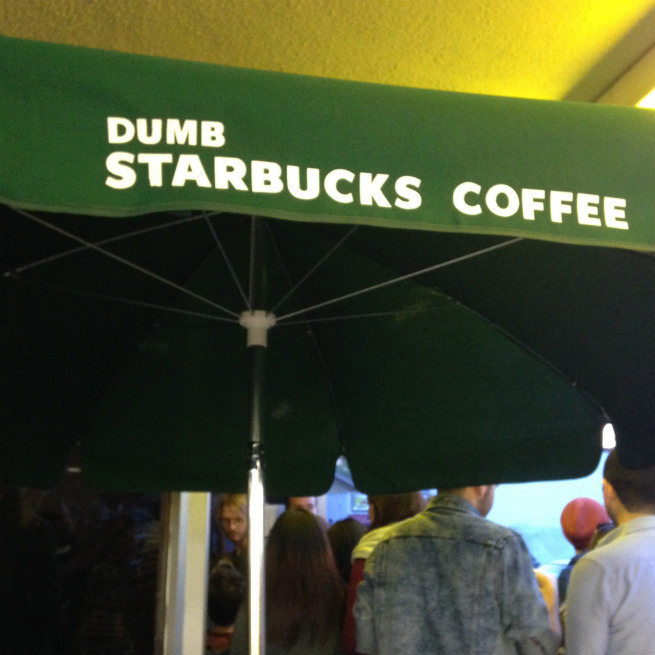 There were dissenters who found it too “hipster.” And while it’s true that there were more woolly hats, beards, and shredded leggings than one would see in line at Marshalls, there weren’t many more than one would see in a regular Starbucks line. Los Feliz and its neighbor Silver Lake often get stamped with being hipster domains, but defining something as “hipster” jumped the shark a while ago. Was it hipster to be here, wanting free coffee? No. Was it hipster to be here primarily just to Instagram the whole thing, which is what everyone in line — and in the store — was busy doing (this, and that there were only two Craigslist-hired baristas, helps explain the wait)? Maybe, though plenty of the goths and normies among us were pointing their phones every which way as well. Several news crews set up shop in the parking lot, and in the evening someone from (according to his microphone) Telemundo urged us all to “try again tomorrow” when the doors were finally shut. As the FAQ informs you, Dumb Starbucks is an art gallery, but despite what it says, the art isn’t the coffee.

The reporters were not the only people who seemed happy to be there: two bootleggers were selling Dumb Starbucks hats ($10) and stickers ($1). One of them, a guy named Bill, said he was selling the merchandise as fast as he could crank it out. Friends ran into each other: A group behind me was spotted by an acquaintance as he was exiting the store, and I bumped into an old friend, who was taking a photo of the awning. I asked him what he thought all of this was about, and mentioned the rumor floated in comment threads that this was a Nathan for You prank. He said he thought it might be “Dumb Banksy.” 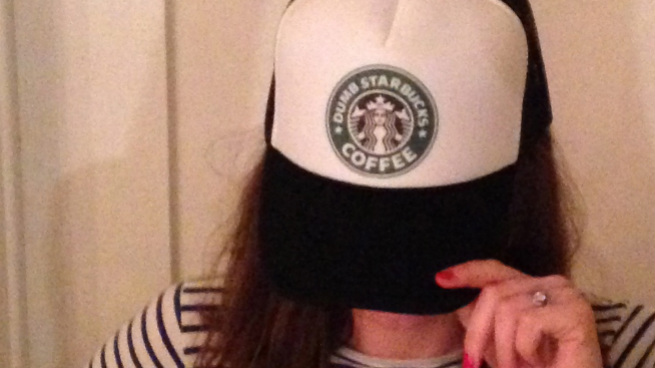 I thought that getting there a little after 4 gave me a decent shot of getting in. At 5:25, I had moved about 30 feet closer to the door, and an announcement came that they were shutting down in five minutes. This was followed by a paper sign that had hung in the window stating the new Dumb Starbucks hours, which was passed solemnly down the line as people realized they weren’t getting in. A few started chanting “We want Dumb!” then stopped when it didn’t gather steam; some were angry; and a person behind me exclaimed, “They’re troglodytes! Everyone, go on strike.”

The line dissipated a little, but a lot of people stuck around to chat with each other, or the bootleggers, or anyone who seemed to know anything about what exactly Dumb Starbucks was. Would it open again tomorrow? KPCC notes that it doesn’t have a business license or health code rating posted. Was it some kind of strange project, or a happening? Anything seems more likely than it being an actual coffee shop. There is no official website, just a spare-looking Twitter account and an email address (dumbstarbucks@gmail.com) that didn’t respond to me when I asked its hours. Whoever is behind Dumb Starbucks isn’t driving any of its publicity; we are. Because it’s not asking for anything in return, it maintains its mystery and can get away with more — both as a store and as a joke. Maybe that’s a turnoff for some, and maybe that’s why the term hipster is being used to describe it: It does something attention-getting, then basks in the reaction it gets without feeding it, like a duckface selfie accumulating notes on Tumblr. It means something, or it must by now after all the clicks and hashtags, but we haven’t got a clue what that is. It trades in an invisible currency, but it still gets your adrenaline going in a palpable way. Popularity, even brief popularity, is so closely associated to being rich that at times it seems like a negligible difference.

Being in line was sort of like standing inside the real-time Internet. Your awareness that you were part of a crowd that everyone was photographing would have felt invasive, if you were not doing the exact same thing. Surely we were all checking Instagram for #dumbstarbucks and #dumbstarbuckscoffee to see if we were showing up in any photographs (oh, pretty woman with the cocker spaniel puppy, you should have been in every one), all of us documenting this weird place we found ourselves in and feeling like it was necessary to record it. We were all reporting; the line was full of people with bent necks applying filters, swiping, and saying “I’m here.” If Instagram and Twitter are usually afterthoughts to dinners and vacations and excursions to strange places, here it was the whole point. I asked someone on his way out if he thought the coffee was any good. “It’s OK,” he said. “I just really wanted the cup.”

Filed Under: We Went there, Dumb Starbucks, Starbucks

'The Walking Dead' Recap: Carl's So-Called Zombie Life in 'After'

'Game of Thrones' Has Released a Season 4 Preview Video. You'll Never Believe How Long It Is. (14 Minutes.)