‘The Walking Dead’ Recap: Carl’s So-Called Zombie Life in ‘After’ 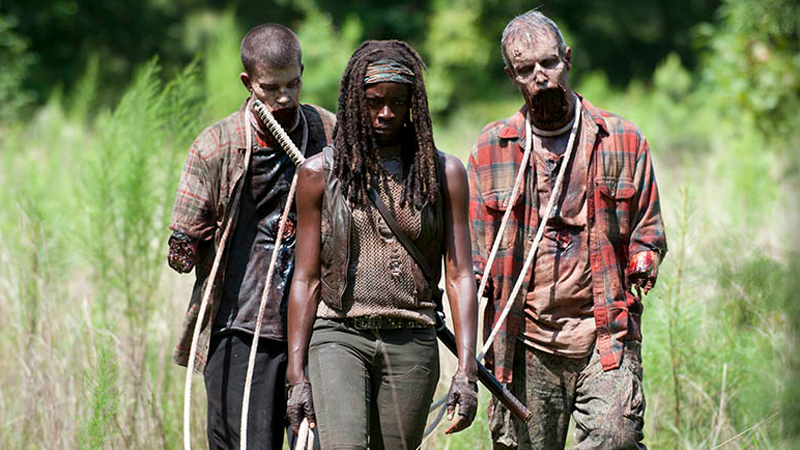 Has it really only been two months since last we saw our adorkable band of post-zombie survivors flee their bombed-out Supermax sanctuary into backcountry Georgia? It seems ages ago: Shia LaBeouf was still famous, Jay Leno hadn’t yet gone off the air, and Justin Bieber’s first mug shot was just a wish in search of fulfillment. But here we are, admiring Vladimir Putin’s Olympic Potemkin village, when all of a sudden The Walking Dead lumbers out of the basic-cable woods, thirsting for our flesh and ratings. And boy, did it lumber: slow and half-rotting. Tonight’s first episode back after the holiday break was quiet, uneventful, and a little listless. If you want to be generous, you could call it a contained bit of adolescent character study; I’d say it was an extended riff on James Van Der Beek’s signature line from Varsity Blues — just with more zombies and less subtlety.

It’s not like The Walking Dead has ever — ever — met a monologue it didn’t like. But with this start, Season 4 officially feels weighed down by aimlessness. Where do you go with a story and characters who know there’s no light at the end of the tunnel, just an undead garbage disposal waiting to cut them from the opening credits? New showrunner Scott Gimple’s answer was to take us on a Camus-and-Zombies detour before offering a redo of Season 3’s ending. But let’s be honest: No one’s watching the Walking Dead for existential insight or a complex, layered dramatic tapestry. This is American Gladiator meets Survivor with prosthetic decay. We want to see bodies — live or zombified — get minced in a flesh-blender. The trick is sustaining narrative tension and audience involvement between corpse attacks. With the show’s most interesting characters — Carol, Daryl, Hammer Time Tyreese and dead-inside Beth — still in limbo, we had to make do with Rick and Carl, with a dash of the ever-amusing Michonne for flavor. But since Rick looked like he could barely ask one question tonight, let alone three, I’ll confine myself to the biggest one on my mind as The Walking Dead reboots itself yet again.

Episode 9 opened with Michonne surveying the fallout from Episode 8’s gunfight at the Zombie Corral: a still-smoking tank, a prison sublet for which Rick won’t get his security deposit back, and, of course, the late Hershel’s decapitated head. Although her heart was clearly no longer in it, Michonne katana’d a couple walkers before selecting two candidates to de-mandible and keep as pets/camouflage. Then she symbolically stabbed Hershel’s head, its jaw still twitching with the reflexive need to sermonize about never giving up hope, and caressed it lovingly, perhaps only now understanding the late governor’s love of aquariums.

But the real star tonight was everyone’s favorite deviant masturbator Carl, who seemed to be acting out his own special episode of My So-Called Zombie Life. Maybe it was the frustration of no longer having the prison showers to work out all those hormones without anyone walking in on him, but Carl seemed determined to hurl every angry teenage cliché at his father as they marched to god knows where. Now, I’m the last to cut slack for Rick “Hand-Wringing” Grimes, but good grief. It’s a world overrun by flesh-eating monsters, kid. Not everything’s your dad’s fault. Then again, Rick didn’t help his case, shuffling around like the town drunk who’s been ejected from a cut-rate Laughlin casino after gambling away Junior’s college fund. When father and son came upon an abandoned BBQ shack, Rick couldn’t even de-brain a walker with his ax: Carl had to rescue Pops with his six-shooter, and Rick promptly chastised him for wasting a bullet. When Michonne came across their footprints on a side road and just kept walking, I didn’t blame her.

The bickering continued when Rick and Carl found shelter in an abandoned house. After Rick got on his case about remembering to lock the door — I mean blockade it shut with a sofa and HDMI cord — Carl threw the name of Shane, everyone’s favorite rageaholic (and possibly baby Judith’s real daddy), back in Rick’s face. Feeling feverish, Rick retreated to the bathroom to stare dramatically into the mirror. However, the next morning Rick had trouble waking up, and Carl’s irritated shouts only summoned two stray walkers. Frustrated with his “like, OMG totally useless” dad, Carl decided to lure them away from the house by walking backward into a secluded glen. (By the way, why does anyone still walk backward on this show, conveniently leaving themselves open to a surprise attack and only increasing the likelihood of tripping helplessly to the floor? Oh, I answered my own question.) Indeed, a third walker almost got the drop on Carl in what has to be this season’s most uninspired walker attack — I guess the keg’s run dry on new ways to imperil people, but couldn’t they at least throw another gut-bungee zombie in there just to spice it up? Of course, Carl escaped, emboldened enough by his teenage sense of invincibility to blame his unconscious father for failing to save pretty much everyone in an on-the-nose speech with less dramatic punch than the Grammys’ “In Memoriam” montage.

Meanwhile, Michonne was having a bizarre surreal nightmare/flashback to her pre-zombie life that seemed to indicate her crudité-chopping skills contributed to her innate katana ability. Additionally, we got this gem as she discussed art with her husband and his friend: “I have never seen a gorilla drive a car before, but if you put it in a museum, I’m not going to call it art.” I have no idea what that means, but somehow I suspect it perfectly encapsulates my feelings about this episode. My takeaway was that Michonne’s old life of insufferable, haute-bourgeois pretension was greatly improved by the zombie apocalypse, even if the writing staff probably wanted me to feel Michonne’s pain as her child literally disappeared from her arms. The rest of the Michonne B-plot could best be described as Walking With Zombies. After hallucinating several zombified versions of herself, Michonne indulged in Tyrone’s patented walker-slaughter therapy — the postapocalyptic equivalent of kicking the couch in frustration — and then had an elliptical conversation about regret and recrimination with her dead husband that alternated between vaguely heightening one’s curiosity about her past and frustrating you with its obliqueness.

Not that Carl’s solo adventures were that much more engaging. Breaking into another house to scavenge, Carl found a 112-ounce tin of chocolate pudding before almost getting eaten by another walker that popped out of the bathroom. Eventually, if not gracefully, Carl outsmarted him at the minimal cost of one shoe; he gleefully wrote on the door of the room in which he’d trapped the zombie: “Walker Inside Got My Shoe, Didn’t Get Me!” (If this zombie-apocalypse thing ever works itself out, Carl might well have a future as the world’s worst blues lyricist.) The whole beat culminated in a scene from a rejected Super Bowl commercial: Carl on the roof eating pudding with a walker arm reaching in vain for him from the window.

Somehow this must have helped Carl work through his issues because when he returned and found Rick’s body spasming like a walker, Carl couldn’t quite bring himself to off his dad. Instead he broke down in apologetic tears — a good thing, because Rick wasn’t actually a zombie. Meanwhile, Michonne, realizing she needed human companionship after joylessly beheading a dozen swarming walkers, went back to those tracks in the woods and followed them to Rick and Carl’s door. I’ll admit the show finally offered some emotional payout when Michonne teared up, recognizing Rick and Carl through the front window. That would’ve been a good place to end it; instead, it ended on an odd beat of Rick cracking up like he’d heard a bad joke when he saw Michonne through the peephole.

I don’t want to be too much of a downer, because I think there’s a noble idea at the heart of this episode — watching the cohesive force of survivalist necessity work its magic on fractured relationships. But the difference between this is and an actual episode of My So Called Life is that the latter could find a way to bring us into the turmoil and overwrought drama of the teen mentality, so it felt urgent, palpable, and real. Those petty dramas felt like the end of the world even if they weren’t; here, the end of the world felt like just another petty drama. (And the walker attacks were just lazy.) I’d say this episode was a nice change of pace, if there had been much pace to the eight before it; it feels a little weird to be finding your way at midseason. Then again, as the late, lamented Hershel would invariably have found a Bible verse to remind us: Hope springs eternal.

Even if the abstract corpse-splatter art wasn’t particularly up to snuff this week, you can always count on a good therapeutic zombie slaughter for some thrills. There wasn’t a lot of competition, but Michonne’s katana tantrum — splitting her zombie doppelgänger in half! — was by far the highlight. You can always count on her to serve up some nice cuts of walker crudité.

We Went There: The Dumb Buzz of Dumb Starbucks