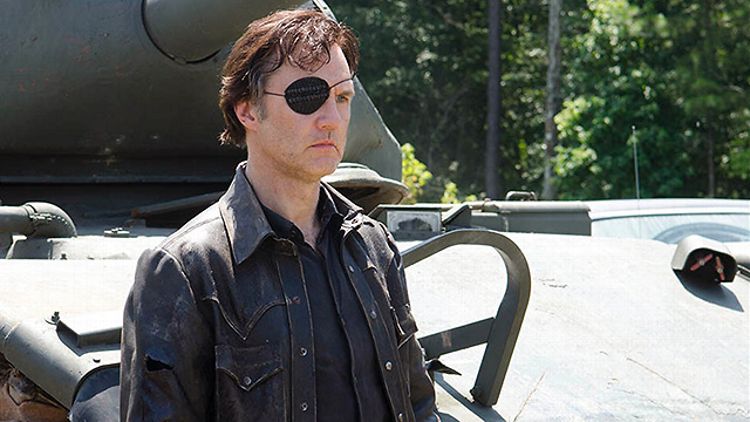 At long last, after slogging like a one-legged walker through a Georgia mud slick, The Walking Dead reached the Season 4 midway point with all the subtlety of a tank storming a prison wall. Beloved characters died; not-so-beloved characters died. The prison went up in a final symbolic fire. The result: a midseason finale of fits and starts that continued Season 4’s cherished tradition of spinning its wheels for 30 minutes only to ultimately shoot like an ill-aimed Acme rocket out into the great beyond.

You’re forgiven for thinking it’s still May 2013, because apparently the writing staff does. Maybe it’s showrunner’s remorse for that hiccup of a Season 3 ender, but Scott Gimple & Co. did a rewind with Episode 8, giving us the Governor vs. Grimes grudge match (and accompanying AK-47 soccer riot) that we’d all been anxiously anticipating — eight months ago. This time, the violence and mayhem were less anticlimactic; it was even dark, melodramatic fun in spots.

Still, following the nonevents of the first half of Season 4, there’s no doubt what our first question needs to be:

Why Didn’t They Do This Eight Months Ago?

Only God knows. And frankly, only He could forgive that sin. Judging by the second-half teaser that aired during Talking Dead, little of what happened in these first eight episodes really mattered. The only justification seems to be that Gimple fished out an old high school philosophy syllabus, read some Camus over the summer, and decided The Walking Dead’s fan base needed an intro to existential angst. I’d say Camus must be spinning in his grave, but Camus was too cool to spin. Or care.

Anyway, Sunday’s episode opened on iGuv in full murder-campaign mode, convincing his gang of wide-eyed Woodbury 2.0-ers to stage a full-frontal attack on Rick’s concrete condo tower in an effort to secure it for themselves. The iGuv must be a lost Clinton relative: He sold a suicide mission with little more than his Southern grin and one-eyed charisma. Someone get this guy his own hour on QVC! Credit Lilly for showing the tiniest shred of moral compunction; she’s not Andrea, but she did everything Andrea never could. “Brian” had gotten the drop on Hershel and Michonne, who were out burning the morning corpses, and had taken them hostage. His not-quite-nefarious plan was to ransom their lives for the prison. Of course, this wasn’t the mustache-twirling Governor of old. He fed Hershel, admitted to Michonne that maybe he’d flipped out just a tad when she filleted his zombie-daughter, and promised that neither of them had to die. Ah, campaign promises.

You see, even though “Brian” had dropped off Lilly and Megan, his adopted wife and daughter of redemption, respectively, by the river while he took care of morally questionable business at the prison, we didn’t need two eyes to see the Bible verses on the wall for Hershel. He’d soared too close to the sun while risking his life to save Glenn and half the prison, he was spitting out feel-good sermons left and right, and he’d branched into American literature lessons. The wheel of fate turns, dutifully nudged by the writing staff. So, when the Governor called Rick away from Tyreese’s discovery of some abstract expressionist squirrel corpse art and lined up Michonne and Hershel by the prison gates to demand Rick cede his beloved Shawshank, we knew iGuv wasn’t going to use Michonne’s katana to trim Hershel’s beard.

After vainly demurring to the Jedi Council — who couldn’t hold a quorum given that Carol was in exile while Hershel and Michonne were otherwise engaged — Rick pleaded harder than an American diplomat for a two-state solution. Couldn’t they just share? (Instantly, a vision of The Walking Dead as Three’s Company flashed before my eyes.) Alas, despite all but busting out Rocky IV’s eloquent “everybody can change” speech,* Rick’s heartfelt exhortations only caused the Governor to tweak harder. Whisper-screaming “LIAR,” the Governor silenced Hershel’s velvet voice once and for all. For all the guff I’ve given Hershel’s old-timey sermons, actor Scott Wilson absolutely elevated the show, no matter what moral gristle he’s had to chew on. You know a utility man like Wilson is an acting treasure because he brings his A-game to G.I. Jane and Judge Dredd as well as to In the Heat of the Night and In Cold Blood. And he helped me brush up on my Bible study.

(*I can’t take full credit for this link. My dear friend Matt pointed out the eerie thematic similarities and sent me on a Stallone clip-viewing binge-spiral that got pretty dark. We’re talking Judge Dredd dark.)

But once Hershel fell, the third intifada began.

Why Would Anyone Let a Child Play Unsupervised During the Zombie Apocalypse?

The award for clumsiest death of 2013 goes to … Megan! While “Brian” was busy putting a hot-lead down payment on their prison sublet, adorable redeemer Megan was baking mud-pie peanut butter sandwiches down by the river. Mother Lilly was keeping an anxious eye on the water as a walker stumbled out of the woods across the stream. She didn’t quite trust “Brian’s” reassurances that walkers can’t swim; of course, by focusing on the lake, she failed to notice the “Warning Flash Flood” sign Megan had dug up from her mud pile, or the mud-bathing walker emerging from beneath. While I’m forced to respect the writing staff for coming up with a 1,049th way for a walker to surprise a helpless child, the overall execution of Megan’s execution bordered on slapstick: I almost expected a decaying Buster Keaton to come gliding down the river. Honestly, sometimes this show’s real gift is making the viewer root for natural selection.

The point was not to win a Darwin Award, however. It was to have Lilly arrive at the prison just in time for the sight of Megan’s dead body to incite the Governor to shout his famous “Kill them all!” line from the comics. With Mitch’s tank doing some heavy remodeling of the prison walls, the Rickettes scattered. Fortunately, Daryl had the foresight to quietly arm everyone while Ricky pleaded, so it wasn’t a lopsided firefight. But in the chaos, Glenn was separated from Maggie and carted off in a bus of fleeing prison refugees; Maggie, searching for Beth, who was searching for baby Judith, got stuck with Bob and Sasha; Beth didn’t find Judith, but ended up by Daryl’s side as he took out Mitch’s tank with a hand grenade; and Tyreese was saved from Tara’s girlfriend Alisha by none other than Lizzie and her gang of tween sharpshooters. Looks like Carol’s extracurricular self-defense classes finally paid off!

But these were mere preludes to the main event: El Guv and Rick, mano a mano at last. It was a hell of a bar brawl; the Governor redefined ass-kicking with what he did to Rick’s face. But as Rick’s puppy-dog eyes bulged in asphyxiation, Michonne’s katana burst out of the Governor’s chest. She didn’t finish him, even though Danai Gurira flashed that patented glare; instead, the honor fell to a morally abhorred Lilly, who finally put the bullet through “Brian’s” brain. So ended the Governor’s second term of terror, his once-promising political career cut short by that eternal pitfall: prison reform.

Still, Rick’s victory was about as Pyrrhic as it gets. Although Carl channeled his inner Lee Harvey Oswald and saved Dad from two hungry walkers, father and son’s only consolation was finding Judith’s bloody baby carrier in the prison yard. Carl had his own future-serial-killer flip-out moment, but the bloodbath was complete, so they fled into the wilderness. As they did, Rick grimly intoned the perfect epitaph for this half-baked half-season: “Don’t look back.”

Seriously, Does No One Care About Carol?

There’s no more telling evidence of the show’s below-the-curve emotional IQ scores than how it’s dealt with Carol. We had all patiently awaited the dramatic fireworks that would surely explode when Rick finally told Daryl that he’d summarily dismissed everyone’s beloved knife-throwing den mother. And what did we get this episode? Norman Reedus reduced to white-knuckling a railing while gritting his teeth. Really? REALLY?! I got more worked up over dumping my college futon. But it’s not Reedus’s fault: He’s been warming the bench this whole time. No, this was simply a case of the writers treating their characters like old Ikea furniture: rearranging and dumping at random in the vain hope that it would somehow distract us from realizing we’ve been staring at empty concrete walls this entire time.

At least Daryl gets the last Kill of the Week award of the season’s first half. Who needs pointy objects when you’ve got the blunt end of an assault weapon? Under heavy fire, Daryl used a walker as a shield — sure, rotting flesh probably doesn’t provide the best bullet protection, but I’ll give Daryl a pass — then swung his rifle with the ease and confidence of a young Barry Bonds. Daryl then blew up Mitch’s tank and put an arrow in Mitch, setting a new world record in the postapocalyptic pentathlon. It doesn’t quite surpass the Governor’s femur can-opener trick from Episode 6, but when it comes to zombie killing, Daryl’s a genuine five-tool player. Let’s pray we see more of him in the back eight. Back From the Dead Watch

Speaking of those final eight episodes, only a fool would try to predict the death toll three months out. Besides, after calling Hershel’s demise, I’d rather quit while I’m ahead.

Still, I admit I’m skeptical about Lil’ Asskicker’s possible death. She wasn’t quite bite-sized anymore, and if she’d really been eaten, there’d probably be more than a bloody skid mark. Might she reappear come spring? Maybe we’ll get lucky and Carol will find her, leading to a delightful Lone She-Wolf and Cub mini-arc. At the least, I eagerly await Carol’s return. In this first half, the show seems to have systematically gutted all of its most dramatically promising relationships. While The Walking Dead has always been a literal meat grinder, its self-inflicted wounds can frustrate even the most forgiving attempts to enjoy the silliness, and none more so than its penchant for excising tension and conflict just as they begin to blossom.

I’ve said it before and I’ll say it again: This isn’t Shakespeare, but it doesn’t have to be. I’m always up for some soap-y, zombie-smashing fun. But until February, I’m going to stick to something a little more briskly plotted. Maybe War and Peace.