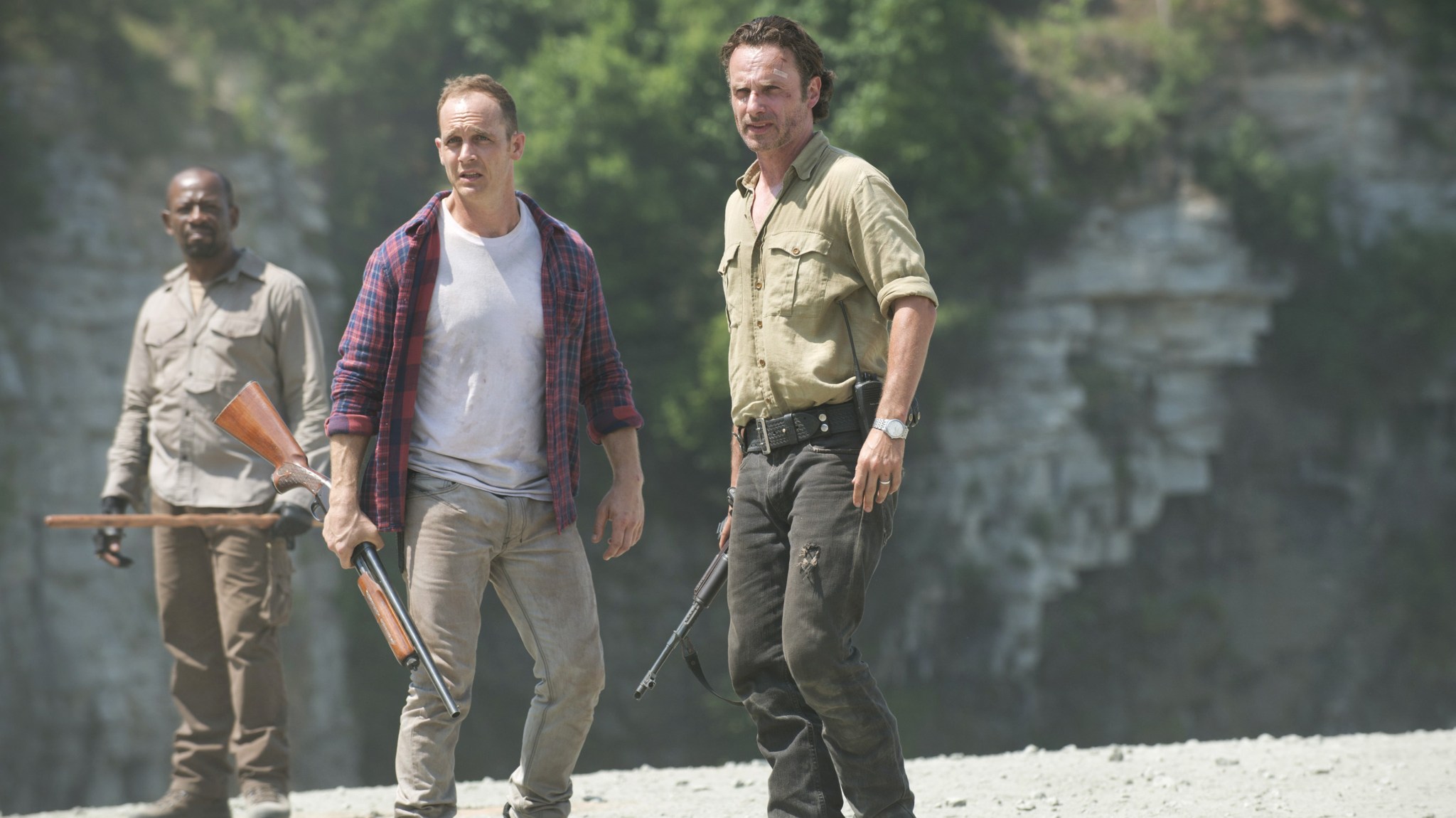 In its sixth season, there are things The Walking Dead can do that no other series can even dream of. Have a putrefying zombie bite the cheek off of one of the stars of beloved teen comedy Can’t Hardly Wait, for example, or have the show’s hero bury a metal spike deep into the brain of said teen comedy star, silencing his screams of agony once and for all.

But there’s another thing The Walking Dead can do that, while less bloody, is actually quite a bit more impressive. And it’s this: anything. Absolutely anything at all. As long as the AMC juggernaut maintains a steady drumbeat of gory, limb-rending deaths, it is essentially unkillable. An average of almost 7 million people were watching back in Season 2 when TWD was frittering away its existence on a limping-horse farm. By the time the Governor was raising a glass to fish tanks filled with human skulls, that number was up to about 11 million. When third showrunner Scott M. Gimple took the reins in 2013, the number was up to a high of 15 million. Three showrunners in four years is usually the sign of a terminal problem, but, again, this isn’t a normal television show. This is The Walking Dead. Not only did the average viewership tick up in 2014, the quality actually did, too. Not that there’s any evidence that opinions like mine matter a single whit when it comes to the public’s insatiable appetite for flesh-eating zombies. Or, for that matter, that concepts like “quality” should even apply. Good or bad, digestible or not, The Walking Dead simply exists in its own atmosphere.

Maybe that’s reason enough to hold it to a higher standard. If nothing can stop you, then shouldn’t everything be on the table? Don’t get me wrong: I admired Gimple’s smart, considered improvements, especially the ones made last fall.1 The version of The Walking Dead that culminated in Beth Greene’s death in a downtown Atlanta monster hospital was lean, compelling, and vicious. If original showrunner Frank Darabont wielded the show like a blunderbuss, Gimple wielded it like a sniper rifle. He picked fewer targets, both emotionally and literally, but never missed.

Why, then, did The Walking Dead begin to frustrate me all over again come springtime, as the survivors stumbled into yet another (budget-saving!) compound filled with a predictable blend of the foolhardy, the dangerous, and the imminent chum? Depending on your feelings about the Alexandria community, I may have just answered my own question. But I think the real reason for my agita was the limited scale of Gimple’s surgery: It was cosmetic, not invasive. All that time tinkering with the engine when the entire car was zooming along just fine? I wish that instead of Rick’s stolid pragmatism, Gimple had flashed more of Eugene’s fanciful, potentially addled imagination. Making the best version of The Walking Dead we’ve known so far is reasonable. But making a better version of The Walking Dead, full stop, is potentially exhilarating.

And here’s the thing: It’s also so, so possible! Unless an entire continent of zombies suddenly goes vegan, there is no chance The Walking Dead‘s ratings will wane overnight. So Gimple could conceivably let his freak flag fly and experiment to his heart’s content. No show in TV history is as malleable as The Walking Dead: Characters can be shredded as easily as script pages; settings can be swapped on the fly. Is it really that far-fetched to imagine a Walking Dead season like Mad Men‘s Season 5, one in which cinematic styles are inserted and ejected like shotgun shells and experimentation isn’t just something performed on unwilling subjects in poorly lit basements? I’d love a bottle episode told from the perspective of a dog. I want Sasha, Michonne, and Carol to go off on a supply run and seriously consider never coming back. I want a multi-episode arc about a high-status idiot making the most of the end of the world. (If it sounds like I’m talking about The Last Man on Earth with brain-sucking ghouls banging on the mansion windows and knocking over the margarita pool, you’re exactly right.) I want The Walking Dead to push past the limits of its own grim psychology and experience the kind of crazy that has nothing to do with sorrow-beards and crossbow bolts. Keep the body count high. But, for once, let The Walking Dead actually live. 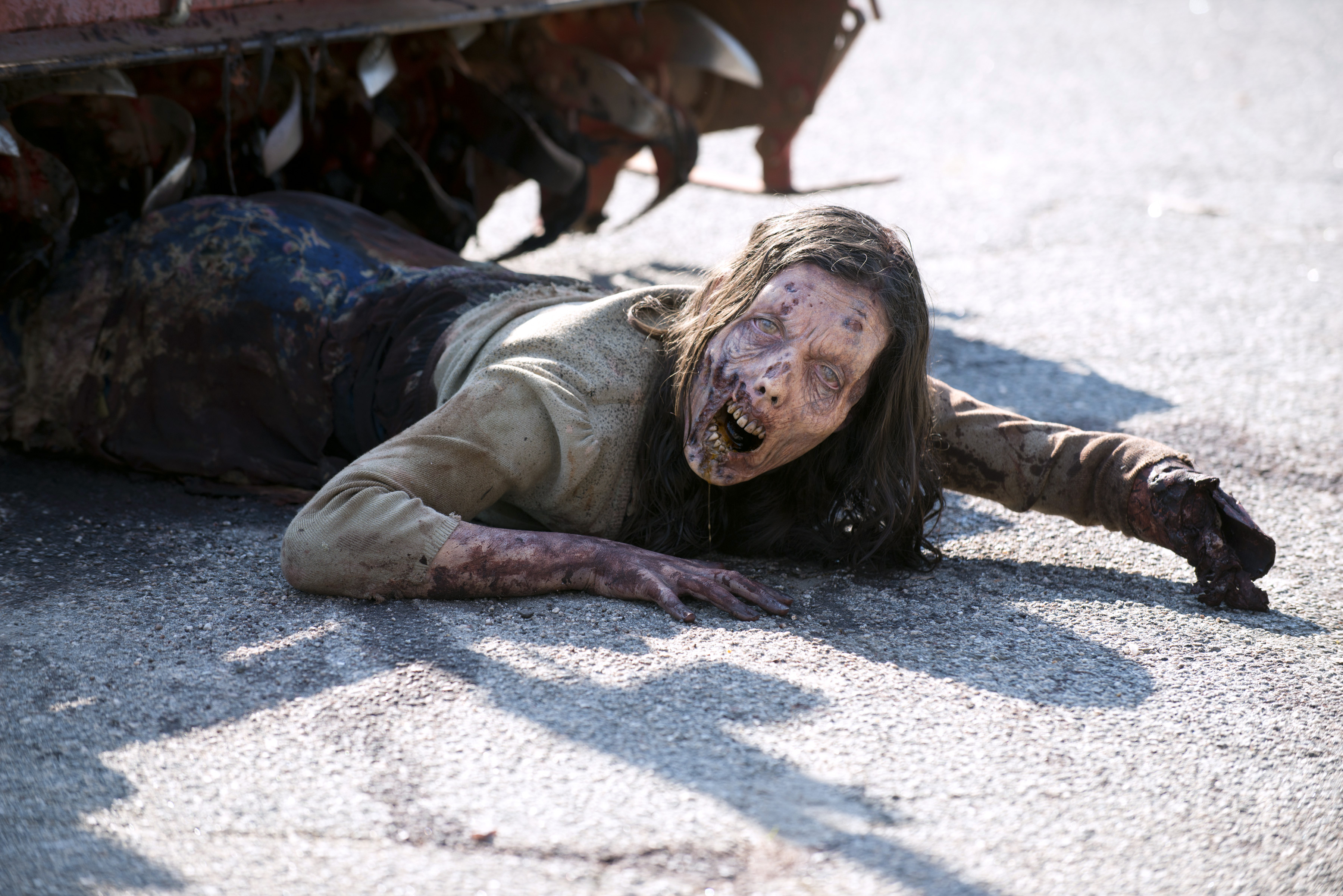 Do I sound like someone driving a bus straight to Washington, D.C., in search of a cure that couldn’t possibly exist? Perhaps. But, look, you’ve now seen “First Time Again,” last night’s sixth-season premiere, and you tell me. For the first time in a long time, don’t you feel a flicker of hope? I found the episode to be plenty gripping and generally entertaining. But I also found it to be formally ambitious in a way The Walking Dead almost never is. It played with time and expectations. It shifted from black-and-white to color as easily as it switched from violence to anguish. It found horror in nearly silent spectacle: an unattended MMORPG of shuffling zombies; a town’s last defenses falling, almost casually, into a pit; Daryl, on a lowrider, leading the slowest funeral procession of all time.

Don’t get me wrong: This was still The Walking Dead. There were at least a half-dozen sweaty conversations about Who We Are and What We Do. Lord knows why Glenn and his new pals had to liquidate that particular tractor-supply store or why anyone employed by AMC thinks we want to see more surly teens forcibly educated in the harsh ways of survival. But I was legitimately happy to see the status quo slide, even if only for the length of the premiere. The Walking Dead‘s greatest influences are still video games, but where past episodes have drawn their inspiration from first-person shooters, like Doom or creepy-crawly button-mashers like Silent Hill, “First Time Again” reminded me of terraforming classics like Populous. For once, Rick didn’t want to defeat an enemy, he wanted to play God and change the environment itself. This was bold, big-picture thinking by the notoriously chill-deficient sheriff, and I’m hopeful it speaks to Gimple’s larger goals, as well.

He has already succeeded in one key area: Rather than introduce another pallid antagonist for Rick to measure himself against, Gimple has given us a friend and, perhaps, a better. I’m one of the many who has been advocating for Lennie James’s Morgan to return to the cast on a full-time basis, and, now that it appears to have happened, the dynamic did not disappoint. Andrew Lincoln’s sweaty, tormented performance is sui generis and, at this point, utterly inextricable from the show itself. But I’ve always found his gravity to be something that’s been imposed on him; it weighs oddly on his shoulders and forces other stars off their axis whenever they venture too close. (Seriously, pay attention to how the rest of the cast interacts with Rick: Daryl grunts, Glenn blinks; nearly everyone else cringes.) James, in contrast, is an entire solar system. He carries his character’s burden as neatly as he handles a wooden staff. Knowledge of How the World Works Now — the white whale of Ahab Grimes’s version of the show — is something that has already been assimilated. He’s a man no longer interested in testing boundaries but in abiding by the fence posts he has already set. “I’m a killer, Rick,” he said last night. “And you are, too.” That Morgan already seems like a more qualified leader for the group suggests that his return might not be a long one. But the friction between these two frenemies is already more interesting than a whole pack of self-appointed wolves lurking just beyond the frame.

Is this a lot to derive from a single episode — one that, it should be added, didn’t even have the decency to conclude its central dramatic gambit before fading to black? Probably. But I’ve spent a lot of time chasing ghosts on The Walking Dead, enough to have turned a little vacant-eyed and staggery myself at the thought of stabbing my way through another season of the same occasional highs and bottom-of-the-grave lows. The Walking Dead may never be “great” by any traditional or critical metric. But last night’s premiere gave me the impression that it isn’t done trying to be. I’d like to think that whiskey-drunk, grief-mad Abraham was speaking for the show itself when he spoke of “grabbing the bull by the nut sack.” I want more of the devilish grin he flashed a moment later when he purred, “I’m living, darling, just like you.” Here’s hoping.