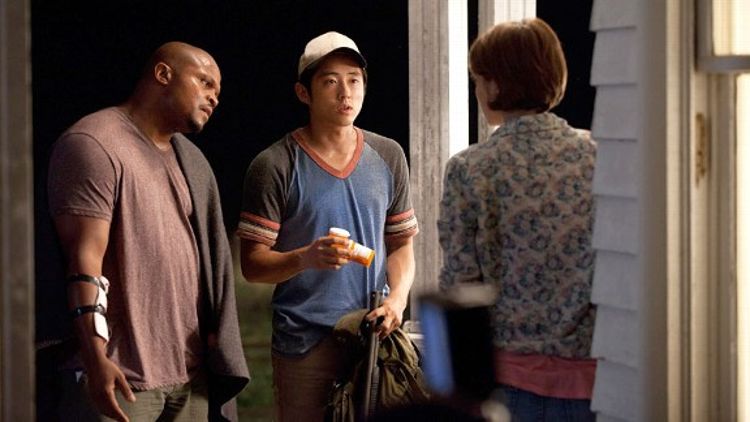 The world may have ended but the pilot of The Walking Dead was full of promise. It’s like that with any first episode, of course: The beauty of television is that the establishing hour of a show is always about possibility, even when it’s also about awful, decomposing little girls with a thing for human offal. It’s only in the succeeding episodes where fences must be built, boundaries set, extras eaten. As The Walking Dead has lurched through its first few hours — the abbreviated first season and now this more traditionally sized second — it’s taken us from Rick’s solitary rebirth in the abandoned hospital and showed us how, in quick succession, he’s strapped on the obligations, supporting characters, and universe-establishing decisions of the writing staff. Each step along the way added detail but also limitations; with so many moving pieces, it’s hard to make many major moves at all.

So it’s possible, I suppose, to make an argument that the highway traffic jam we’ve been stuck in for the better part of two episodes — in which half the cast sweats it out in an antebellum farmhouse, while another half wanders dumbly through the woods and another character is forced to attend the worst high school pep rally in history — is a necessary intermezzo for a show with literally nowhere to go. But admitting that seems akin to Jacqui’s decision at the end of last season to be incinerated with Dr. Jenner rather than face another night in Dale’s rickety RV. There’s a moment in “Save the Last One” where Lori uses the memory of Jacqui — honestly, it was nice to hear she had made such an impression on her fellow survivors because she certainly didn’t manage the same with the audience — as an argument for letting her son die from his gunshot wound. “It’s like living with a knife at our throats every second of every day,” she despairs. Hope is more important than bullets to these characters — without it, they’re goners. Unfortunately, the same could be said of the show. If there’s nothing better to do in between crossbow-fueled bloodbaths than debate theology on a rickety Georgia porch, then we just might have to Jenner this thing right off of our DVRs entirely.

It doesn’t help, of course, that the arguments the characters on The Walking Dead make for continued living are so lame. When Carl conveniently wakes from his distended-belly fever dream he raves about the deer he shared a bullet wound with. (He then experiences a full-body seizure. The kindly veterinarian recommends doing nothing lest they hurt the kid. Correct me if I’m wrong, but isn’t that the exact opposite thing you’re supposed to do for people having seizures? But then again it’s probably the best way to treat epileptic horses, so what do I know.) Rick, by now so drained of blood even the residents of Bon Temps wouldn’t consent to have sex with him, uses his son’s latest suffering as an opportunity to tell Lori about what happened back in the season premiere with the same fetishistic, unpoetic detail as Kevin Costner talking about Dealey Plaza: “And I looked at Carl, looking at that deer. And that deer looking right back at Carl.” (WHO DID CARL LOOK AT NEXT, RICK?) Lori shows far too much patience with this venison vamping — but, then again, she’s a nominally heroic character who enjoys sleeping with her husband’s best friend and is actively campaigning for her son to die, so her priorities seem a little screwed up in general. Rick, and, by extension, episode writer Scott Gimple, believes that this one utterance — “He talked about the deer, Lori! He talked about the deer!” — is the necessary justification for allowing a guy accustomed to spaying golden retrievers between spirited games of cribbage to operate on their son. Sure, fine. You know what another argument is? He’s your son! Everyone wants to stay alive above all else, even in horrific circumstances. That’s a more recognizable human emotion than a passing moment of Bambi-rapture.

But The Walking Dead is obsessed with this notion of checking out. Mere hours after cutting short their search for the still-missing Sophia because of darkness, Daryl and Andrea head right back out into the forest, blasting around a high-powered flashlight as they go. This seems extremely imprudent! But with all of the zombies busy at the sock hop, this nighttime stroll is merely an excuse to muse on Andrea’s uninteresting inner monologue. In exchange for a wasted arrow (to dispatch a suicidal hunter who forgot that the undead aren’t bothered by a little rope burn around the neck), she tells Daryl “I don’t know if I want to live, or if I have to, or if it’s just a habit.” She then tells Dale that she’s “trying” to forgive him for rescuing her. Dude, we’re the ones beginning to think he made a mistake! It seems clear that the producers feel an obligation to grapple with some larger themes here, but suicidal protagonists are rarely able to sustain our interest for very long — even Martin Riggs eventually found happiness with Joe Pesci. There must be a spare Fall Out Boy CD in one of those abandoned cars, right? Get busy living or get busy dying, girl!

Humanity’s unquenchable survival instinct was expressed much more effectively through Shane and Otis’s doomed field trip to the High School of the Dead. Sure, the logistics of the campus adventure made zero sense: Did students major in fence construction? How can zombies climb stairs but not bleachers? And how much of Otis’s heroic, seemingly impossible escape from the locker room got cut because of Matt Weiner’s contract demands? (Also: If Otis could just shoot his way out of the locker room, why didn’t Shane join him? And can medical equipment survive a three-story drop any better than Shane’s ankle? Don’t think, Andy! He saw the deer! HE SAW THE DEER!) But when it came down to saving himself — and, maybe, Carl — Shane acted more intelligently than just about anyone else on the show to date. As we witnessed via tortured flashback during the show’s best usage yet of Hot Shower Porn — yes, better than the three-man bubble bath in the pilot and the collective loofahing back at the CDC — Shane made a fatal choice on the long, fence-lined road out of the school. With hope mostly gone and time running out faster than ammunition, he took down Otis, making the big lug a sacrificial salad bar for the rampaging hordes and the perfect distraction for Sugar Shane’s escape. (Intelligent, yes, but not exactly compassionate: He couldn’t have shot Otis in the head instead of wounding him in the leg? I mean, yes, he plugged Carl but he didn’t exactly deserve to be ripped apart and eaten.) Shane may consider himself a monster — why else make the horrific decision to shave off all that lustrous hair? — but to my eyes he’s the most human character here. It’s a lot more interesting to see the lengths people will go to stay breathing than it is watching them agonize over offing themselves. And it’s a cruel irony of The Walking Dead that it only comes alive when the dead people show up.