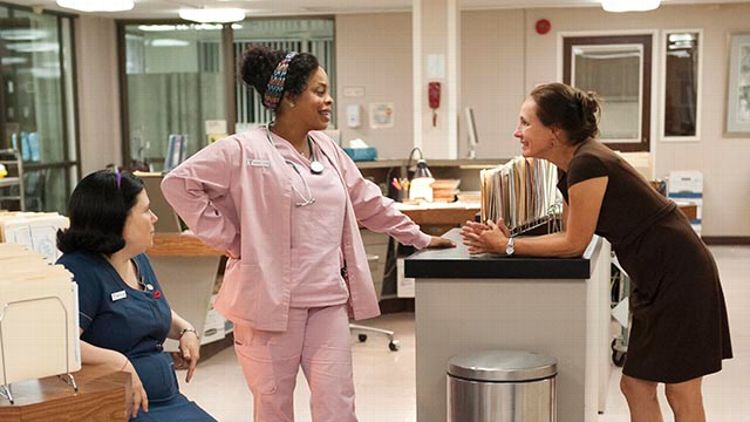 Death is all over cable TV. You can find it walking, talking, and generally bleeding into every series, and why not? When it comes to surprising audiences, scaring complacent actors, or merely shaking up the status quo, there’s nothing more dependable than death. What television — and, if we’re being honest, culture in general — tends to shy away from is dying. Despite what the contents of our DVR might suggest, the majority of us won’t be shot with a crossbow bolt at a cousin’s wedding or gunned down in a fusillade of neo-Nazi bullets in the New Mexico desert. Instead, we’ll probably get old and then things will slowly stop working and then, eventually, we’ll stop working too. It’s not pretty and it’s not nice to think about. So why would we want to watch it?

Getting On, which debuted last Sunday night on HBO, doesn’t ask that question so much as it sticks our noses in the answer. Set in the elder-care wing of a failing California hospital, the series chronicles the daily struggles and myriad indignities of the patients nearing the end of their lives and the harried health-care providers barely hanging on to their own. If this sounds like a tough sell, even in TV’s bold, risk-taking present, you have no idea. Adapted by married Big Love creators Mark V. Olsen and Will Scheffer from a British series of the same name, Getting On shatters nearly every one of TV’s unwritten rules about who gets to star in things, what they look like, and what sort of stories deserve to be told. The leads, Alex Borstein, Laurie Metcalf, and Niecy Nash, are all actresses on the far side of 40; the women they care for are often twice that age. The pilot introduced itself with a nearly 10-minute jag about a turd on a chair (“fecal matter,” as Borstein’s Nurse Dawn would say). Last night concerned a profane, racist stroke victim (played by Alexander Payne stalwart June Squibb) repeatedly vomiting on Nash’s quietly kind nurse Didi. Getting On‘s color palette is dry bordering on drab and, as directed by squirm-core vet Miguel Arteta (Chuck & Buck, Cedar Rapids), the tone is far from palliative. Breakdowns are had, asses are wiped, stool is collected. There is precious little dignity to be found here. The show is built around people too stubborn to give up the search.

Still,  happy as I am to see HBO investing in a show that’s set in a non-zombified present, merely depicting things rarely seen on TV isn’t itself cause for celebration. Bravery — or the kind of fearlessness one can only acquire after mining five seasons out of polygamy — doesn’t always equal worth. And much of the pilot dipped too far into cringiness for my tastes, particularly the scenes involving Borstein’s Dawn, a self-pitying chatterbox who plays Angry Birds beside a patient’s deathbed and then lustily digs into said patient’s uneaten birthday cake. But I was impressed with last night’s episode, particularly once it became clear that the camera wasn’t lingering on scatological details and humiliating moments just to shock. There’s rubbernecking and then there’s an unflinching, compassionate stare, and Getting On seems to understand the difference even if its self-absorbed characters often do not.

Directed by Howard Deutch, who has grayed considerably since helming Pretty in Pink, “If You’re Going to San Francisco” smartly regulated Metcalf’s mania — her unhappy Dr. James is the best small-screen role she’s had since the glory days of Roseanne — and introduced Mel Rodriguez as Patsy, the buzzword-spewing new head nurse. Getting On is ostensibly a comedy even though it’s rarely all that funny; last night featured Squibb calling Rodriguez a “cocksucker” and nearly breaking his nose. (The punch line? She was a very sick woman who needed her meds! Don’t forget to tip your waitress!) The best thing about the episode was the way it leaned heavily on the truly sublime Nash. Known for her brassy performance on Reno 911!, Nash is a revelation here as Didi. Stripped of all artifice and vanity, she alone attempts to connect with the patients as the people they once were, not the fading shells they’ve become. For Dawn and Dr. James, sedation is an easy shortcut for bedside manner; Didi remains a small but enduring life raft of humanity floating in an ocean of mortification and shame. It’s a powerful contrast that Olsen and Scheffer are wise to use sparingly. When they do, as they did when Didi caught sight of an extremely ill woman singing sweetly to herself in the reflecting glow of a karaoke video, the genuine emotion in the scene took my breath away.

HBO gave up pretending not to be TV (and the attendant slogan) years ago, and with good reason: It’s particularly nonsensical now that pay cable’s main competition in the field of expensive prestige is a streaming video service. But the six-episode Getting On is the type of modest, unflashy (some might even say downright unappealing) project that only HBO could pull off. It’s a show unconcerned with sentiment, uninterested in being liked. Its health professionals are decidedly amateurish and offer little in the way of care. Its elderly patients don’t have lessons to impart or warm yarns to spin; they’re not mirrors to make us feel better about ourselves, they’re road maps to scare us half to death. Getting On is absolutely tough to watch but, like the people and issues it gently fictionalizes, it also shouldn’t be ignored. It’s a glimpse of a bleak, dystopian future that’s headed our way faster than anyone would care to admit.