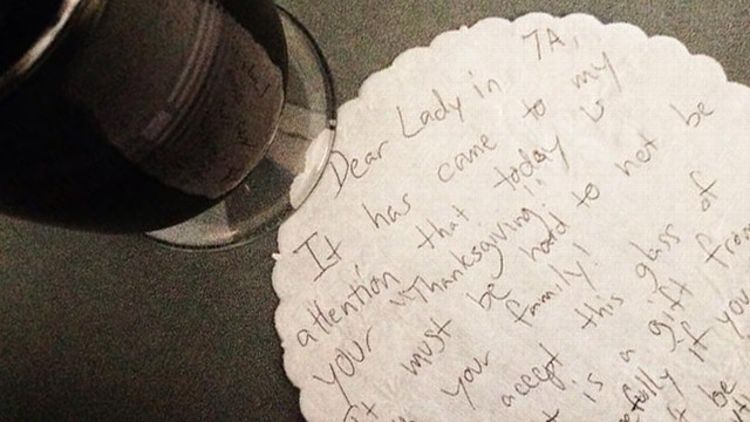 Lately, we’ve been really digging Twitter-feed field reporting. Remember when Kyle Ayers documented a couple breaking up on his rooftop? As concerned as we are over the NSA, we can’t help but spy on each other whenever we’re commingling in public places. Eavesdropping now belongs to tweets-or-it-didn’t-happen territory, even though Twitter proof is flimsy at best.

Take, for example, Elan Gale. Gale is a producer (The Bachelor, The Bachelorette, Bachelor Pad, and let us not omit Cookin’ With Coolio) who has had some fun with us in the past, live-tweeting a blind date that never actually happened. Our memories are short (the date-that-never-was occurred in 2012), so we all gullibly gobbled up his latest adventure last weekend, in which he engaged in a battle with a woman named Diane on a delayed plane. (The saga has been Storified for easy consumption.) Gale started typing when Diane began bickering with a flight attendant (“Today is Thanksgiving! I’m supposed to be with my family. NOT with you people I barely know!”); soon after the plane took off, Gale decided to ramp up the drama by making this into an interactive adventure. He sent Diane a glass of wine paired with a passive-aggressive note, then delivered two snack-size bottles of vodka to her seat. Diane responded with her own note, calling Gale “an awful person with no compassion,” which led to Gale retaliating by describing Diane to his 160,000-plus followers as “wearing mom jeans and a studded belt and […] a medical mask over her idiot face,” asking the US Airways Twitter account to “remove her” from the plane, and following up with another missive, this time closing with “eat my dick.”

Diane found Gale’s second note inappropriate, and told him so (via another cursive-penned note), which only added more fuel to Gale’s fire. His last note encouraged her to follow through on her threat to contact the authorities upon landing as well as suggesting that she inform them of her cannibalism (“because you just ate my dick!”). When the plane landed in Phoenix (both Gale and Diane planned to catch connecting flights), Gale waited for his nemesis at the gate with yet another note — but before he could give it to her, she slapped him in the face. Gale declined an offer to involve the airport police, but apparently couldn’t stop himself from giving Diane yet another letter, in which he told her to look up his Twitter handle and “read every tweet. Read every response. And maybe next time you’ll be nice to people who are just trying to help.”

In the aftermath of all of this, Gale has portrayed himself as some kind of manners martyr. Everyone who has ever worked in customer service harbors a little pile of embers inside them, waiting to be ignited into a rage-fire when they witness a person being rude to a worker in a powerless situation. Flashbacks to standing around in a uniform being yelled at by a dingbat who is dissatisfied with the product or service purchased from your employer are lifelong effects of slinging burgers, ultimate margaritas, and sunglasses from a hut. Gale added a postscript to the in-air drama with a blog post declining the honor of being called a “hero” (really?) and cautioning the world at large to “be nice.” Yes, be nice. That’s good! But then Gale went on to elaborate: “[I]t’s OUR job to tell every Diane to shut up. It’s OUR duty to put the Diane’s [sic] of the world in their place. We need to REMIND them about the way of things.” That doesn’t sound very nice, even if it does come with a glass of wine, and it’s also hypocritical. Diane’s reminders that it was important for the plane to arrive on time were what bothered Gale so much in the first place.

After the story went viral, a commenter who identified him- or herself as Diane’s cousin posted a response on Storify. Why was Diane so anxious to get on her connecting flight, and why was her breathing audible to Gale, who commented on it several times during the course of his report? Well, according to the commenter, it’s because Diane has “stage IV small cell lung cancer” (ah, so that explains the mask on her “idiot face”). The cousin wrote that Diane “was very contrite and upset” about being rude to the flight attendant, but she “hasn’t been handling her imminent death very well.” Oh God, the regret! Those giggles over dick cannibalism so misspent! It was not a good moment for #TeamElan. But then something occurred to us, though it didn’t get as much press coverage: This could be one massive, emotionally manipulative troll move.

Melissa Stetten, the model who live-tweeted another airline interaction (with Christian vocalist Brian Presley), wondered why we weren’t more skeptical of Gale’s account. There was the issue of the slap (“Any type of violence in any airport would cause the police to be called, especially since the recent shooting at LAX”), and there was the story of a homophobic note written on a restaurant receipt — which went viral and resulted in outrage and donations to the wronged server a couple weeks ago — that may have been a hoax. Some wondered if the Storify post had been scrubbed of comments that pointed readers to question its veracity, and others figured that part of the story may have been fake while the rest of it was real — but which parts, the notes and the slaps or the cancer? In his defense, Gale tweeted “I will gladly accept criticism from anyone who has more information about yesterday than me. Otherwise, well, ya know…,” but any other eagle-eyed passengers on the flight have been mysteriously absent from the conversation.

The story promised some kind of grand moral message, helped along by its timing: Thanksgiving travel is stressful — don’t use that as an excuse to be an asshole. Don’t think only of yourself — it’s the freaking holidays. Diane, in bits and pieces, was served to us as an example of what happens when you forget about all of that and let your impulses fire away without being halted by common sense. But Gale took his experience of the event as the whole truth without considering what might make a stranger’s flight delay a more serious annoyance than his own — just as he accused Diane of not sparing a thought for the lives of the airplane personnel and her fellow passengers, he felt that he knew everything about the situation and presented it to us as the truth. It probably wasn’t.

Ideally, there is no Diane at all, and Gale is just producing his own social-media reality distraction with invented characters, points and counterpoints, and a lot of moral ambiguity — Fakes on a Plane. Unfortunately, I doubt it. In an effort to teach people how to be nice (and to get plenty of attention for this lesson), Gale showed us how little he knew about kindness. At least the holiday weekend ended on a lighter note, with a fight about salsa.

See all The Bachelor