‘Bachelor in Paradise’: Samantha Turns on Joe and Ashley I. Books a Night in the Fantasy Suite 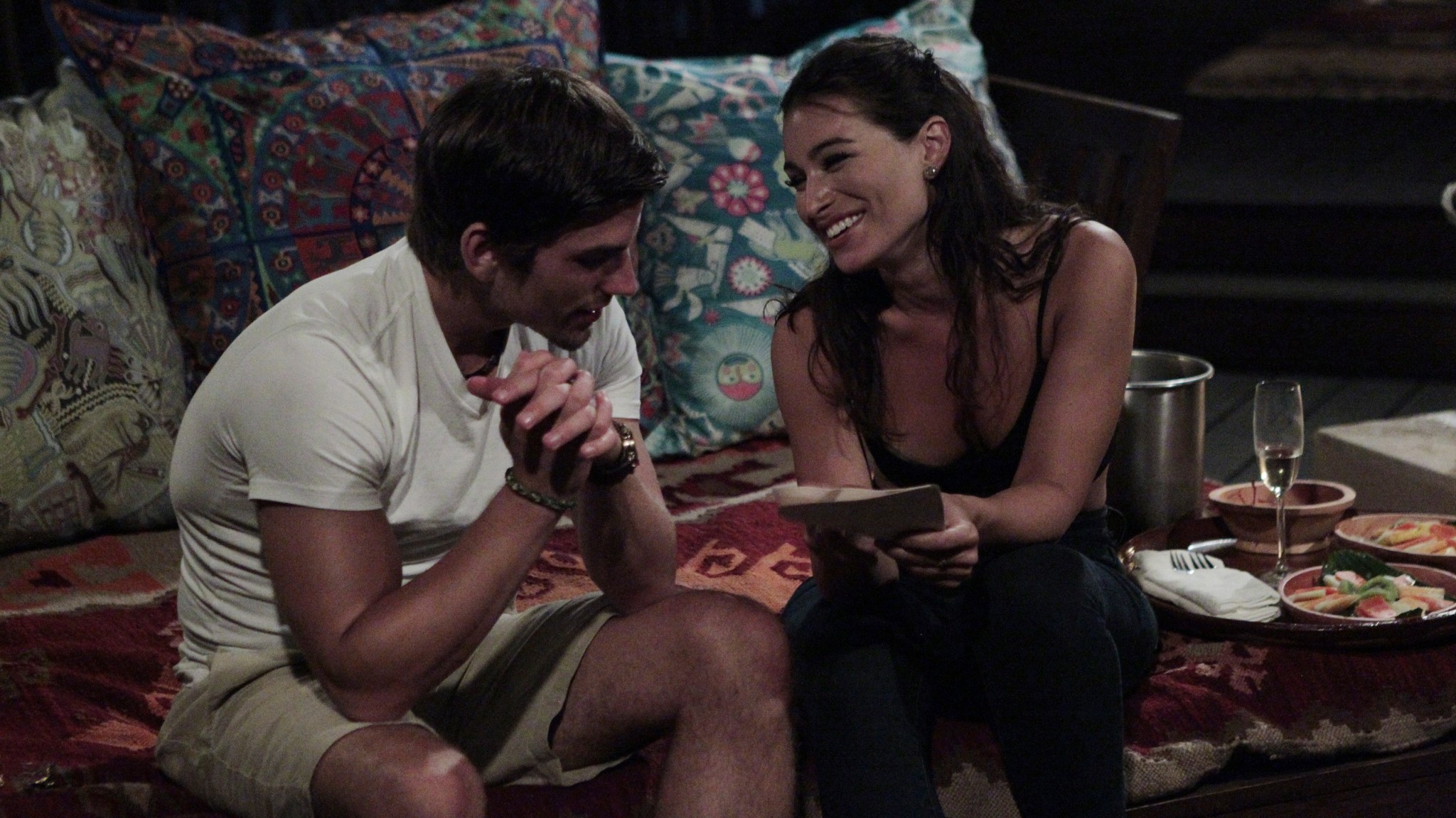 Last night, “Bachelor legend” Chris Bukowski retired from his illustrious career as a reality TV punch line. Chris Harrison unveiled a basketball jersey folded into a picture frame with Chris’s name on it, which will presumably be hung for eternity in the hallowed rafters of the heavily air-conditioned Burbank studio next to the Buffalo Wild Wings where they film After Paradise.

I could debate the merits of celebrating a man who has failed spectacularly to find love five separate times and spent his last-ditch effort to get wifed up annihilated on tropical cocktails. I could compare this retirement ceremony to the hypothetical, apocalyptic evening when the Raptors retire Andrea Bargnani‘s jersey, but I won’t. Instead, I will congratulate Chris Bukowski on having enough self-esteem left to know he can do better than almost falling into a raging bonfire in front of millions of people.

Love is not for everyone, after all. The subtle cruelties of fate, chemistry, and alcohol did in Chris Bukowski’s hope for true romance, but what crushed Joe’s dream was nothing more complicated than paralyzing self-loathing. He could never get past the idea that Samantha was out of his league. If Joe, with his full head of hair and sculpted body, is unworthy of Samantha’s love, then I must be from a different species altogether. The way the cast of Bachelor in Paradise describes her, you’d think she were a superhuman succubus with mind-control powers. After a torturous reconciliation early in Sunday’s episode, Sam dumped Joe yet again — this time at the rose ceremony, which sent him home for good. Sam gave her rose to “nice guy” Dan instead, a man who, for the sake of plot convenience, fell in love with her.

Dan’s manipulation of events hasn’t been analyzed nearly as much as Samantha’s, perhaps because he doesn’t look like Ursula’s human disguise from The Little Mermaid. Beneath Dan’s chummy exterior and Joey Fatone beard lies the heart of a master schemer. He’s managed to play the game so well that he’s stuck around Paradise for weeks without a single real relationship. He played Ashley S. for a rose, then dumped her. He hedged his bets with Amber for a while but had no qualms about telling her he doesn’t see a “spark.” Then, sensing weakness in Joe, he appealed to Samantha’s alleged hatred of drama in order to seize her rose. After all of that, he still has Amber following him around like a malfunctioning R2-D2 — bumping into palm trees, making atonal noises, getting sand in her gears, and spewing oil everywhere. Joe never had a chance because he didn’t realize he was competing against the Bobby Fischer of Paradise. Checkmate, bro.

On his way out, Joe threatened to beat up Dan and lamented that he didn’t have wild, uninhibited intercourse with Samantha while he still had the chance. That’s not exactly what he said. I’m paraphrasing a bit. OK, a lot.

With the Joe/Sam/Juelia/Dan/Mikey T. drama slowly coming to a merciful conclusion, we can now focus on this show’s true strongest quality: dubious fish-out-of-water humor! Justin, the long-lost love child of Tom Hardy and Top Gun–era Val Kilmer, is one of the only single guys left in Paradise, so new arrival/UFO enthusiast Mackenzie gave him her date card, which ended up being a wedding ceremony performed entirely in Spanish. Surprise — Mackenzie doesn’t speak Spanish. “This Spanish man comes up and starts speaking Spanish,” she says, surprised that someone in Mexico would be speaking Spanish. Hard to believe, but it happened. “If we have kids, I don’t think that means our kids are Mexican because neither of us are Mexican,” she thinks aloud after finding out she’s “married” to Tom Hardy-Kilmer.

Yes, your kids would be Mexican … if they were born in Mexico. I shouldn’t expect her to know this. I should take all the inexplicable comments in stride, but after five weeks of buffoonery, I think I’m beginning to lose it. Listening to Mackenzie prattle on about mermaids makes me feel as though my own grip on sanity is loosening with every syllable that escapes her yawning chasm of a mouth. There’s only one week left before Season 2 of Bachelor in Paradise comes to a close, and I’m not sure I can make it. I can only imagine what the longest-serving cast members were feeling at this point in the show. After the 15th time Ashley S. asked a coconut what time it was or the day Tenley peed on Juelia’s leg,1 I’d be ready to jump into the ocean and pray the sharks got me before anyone realized I was gone.

I can do it, though. I can make it one more week. After all, the finale promises yet more breakups, tears, and Ashley I.’s journey into womanhood. She has professed her love for big-jaw Jared, who Mackenzie said looks like “Ashton Kutcher meets Joe Jonas.” I guess the only TV show Mackenzie was allowed to watch growing up was the 2006 MTV Video Music Awards, based on her reference points. Of her last boyfriend, Mackenzie is rumored to have said: He looks like Kiefer Sutherland from 24 meets the lead singer from All-American Rejects, with a dash of James Blunt thrown in for good measure!

The appearance of gives-no-shits villain Jaclyn (who said Jared has “potensh” after sizing him up) pushed Ashley I. far enough that she begged Chris Harrison for a fantasy suite date with her intended. Last night’s episode left us with the expectation that Ashley is finally ready to lose her virginity for the sake of a monster overnight rating in the 18-to-34 demographic. Jealousy, fear, and self-hatred will do that to you. She couldn’t bear the thought of losing Ashton Kutcher–meets–Joe Jonas to the ballsy, assured, confident Jaclyn, so she decided to use her nuclear option to wipe out the competition. Even if it doesn’t work with Jared, she’ll at least have a fun anecdote to tell at bachelorette parties and baby showers.

But compared to neurotic mess Joe, Ashley I. is basically Dr. Phil with hair extensions. Joe got so crazed and protective of Samantha that she took any excuse to punch his ticket back to reality. I don’t think you can actually find happiness if you hate yourself. Ashley’s a beautiful girl (who is allegedly a talented writer) and Joe has … well, a really interesting haircut. Own that and use it to your advantage. Jaclyn, despite lips that could be used in the event of a water landing, flaunts what she does have. Ashley I. carries an ice pack around and cries at the mere thought of being single. If the five-time follies of Chris “Charles” Bukowski — the sad sack who had to get slammered™2 on white wine spritzers to muster up the courage to ask out Tenley — taught us anything, it’s that in order to fall in love, you have to love yourself first.

Or have a lot of money, a glamorous job, a large house, and a luxury automobile. That always works.

The Many Other Hidden Talents of Ashley I.

“I’m a natural-born writer,” said Ashley I. as she was buttering up Jared, prepping him for a deep dive into the gallons of ink she’d spilled to profess her love to him. Who would have guessed that Ashley I. was a modern-day Emily Brontë? You probably thought she was some kind of idiot or something. Well, shame on you, friend. Shame.

This week, Ashley I. proved she possesses considerable ability as a scribe via her two-page love note to our main man J-Rod. But that’s not the only incredibly uncharacteristic ability Ashley I. can count on her ledger. Here’s a few other tools she has in her ever-expanding box of skills: 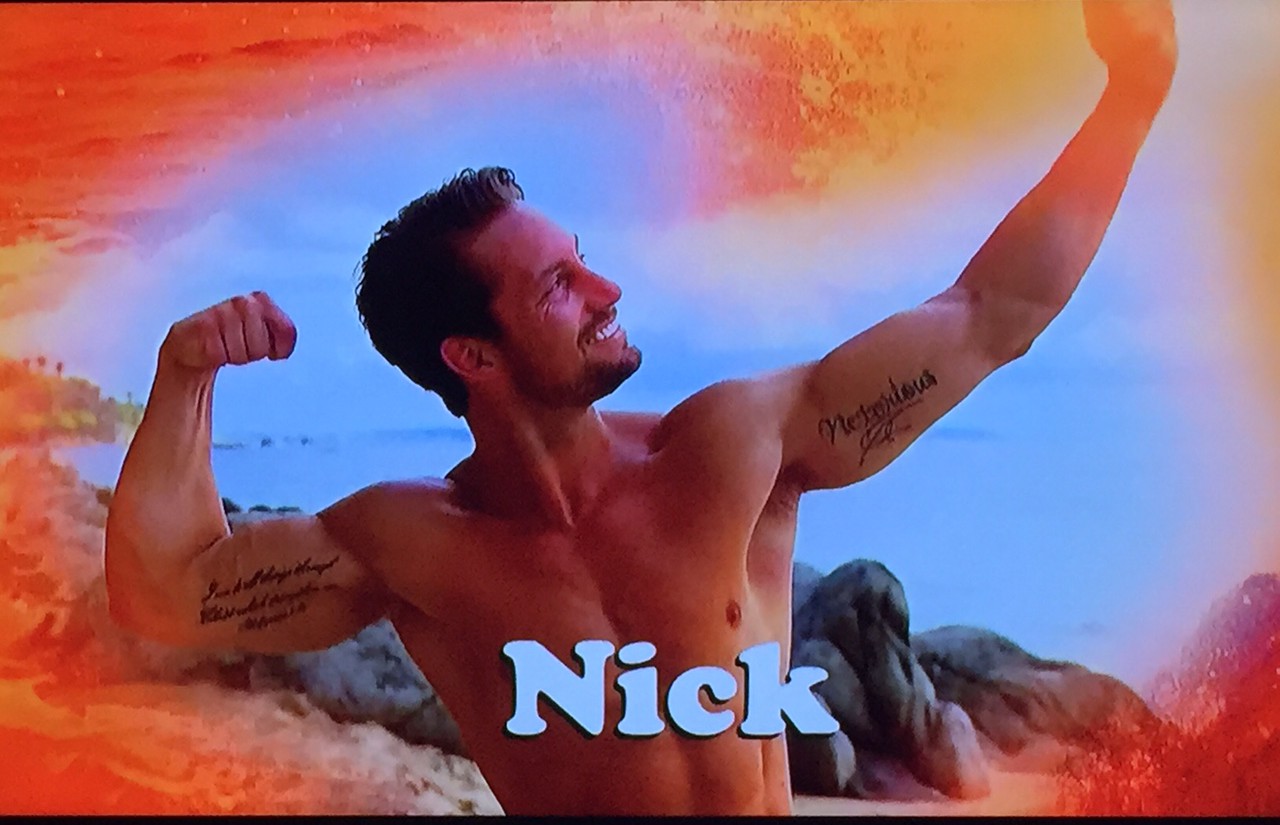 I’m not even going to try to read the paragraph on his right biceps. I’ll assume it’s the Commerce Clause of the United States Constitution, because Nick seems like the kind of guy who really believes in the power of the legislative branch. I mean, look at that face. Isn’t that the face of a strict constructionist?

Anyway, sorry. The tattoos. The other one is just a single word, which might be easier to decipher. Mendacious? Meticulous? Nostradamus? Let’s punch in for a closer look. 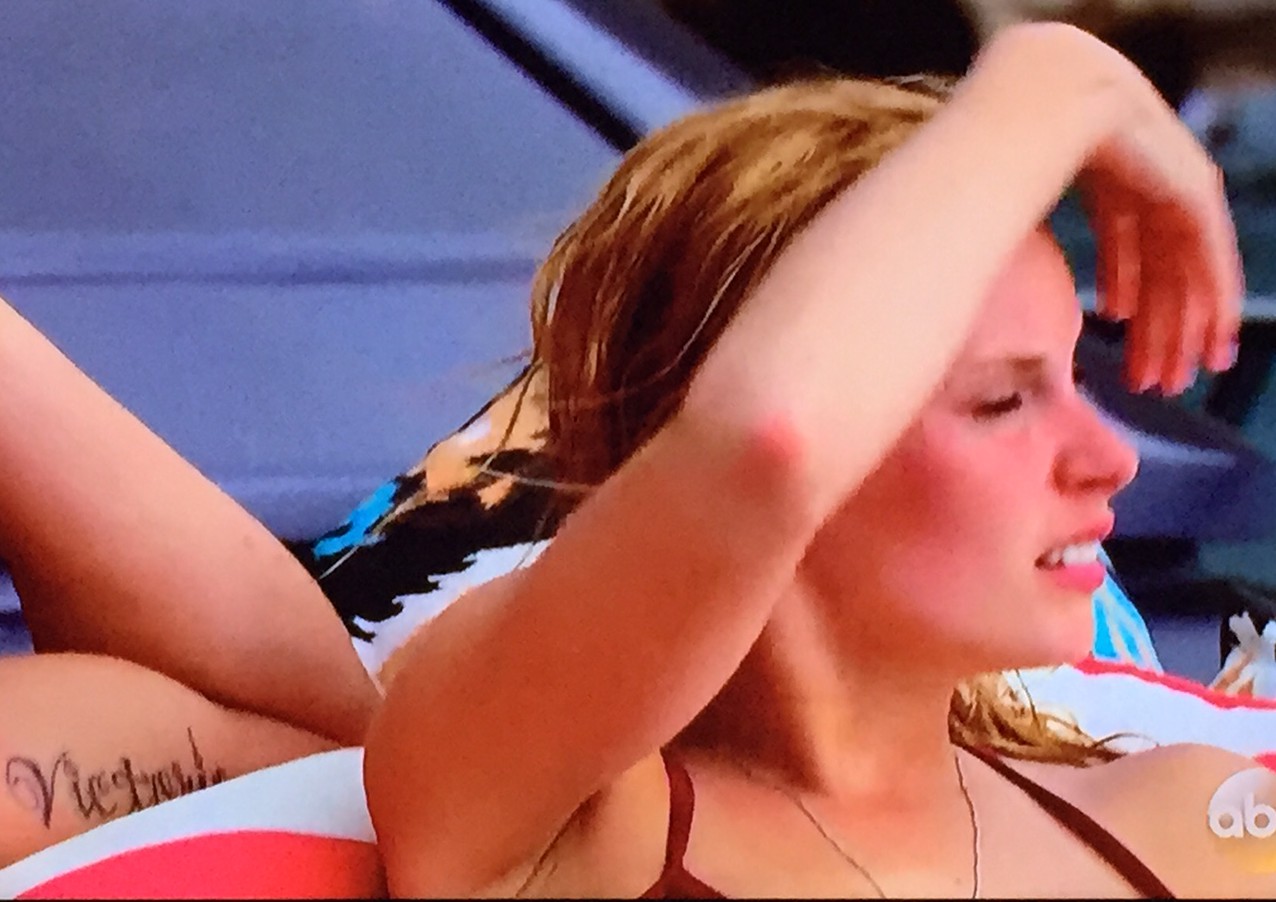 Victoria? Victorious? Like the Nickelodeon show? I’m going to find out that this tattoo is for his dead cousin and I’ll feel like a real jerk, so let’s move on to Joshua. 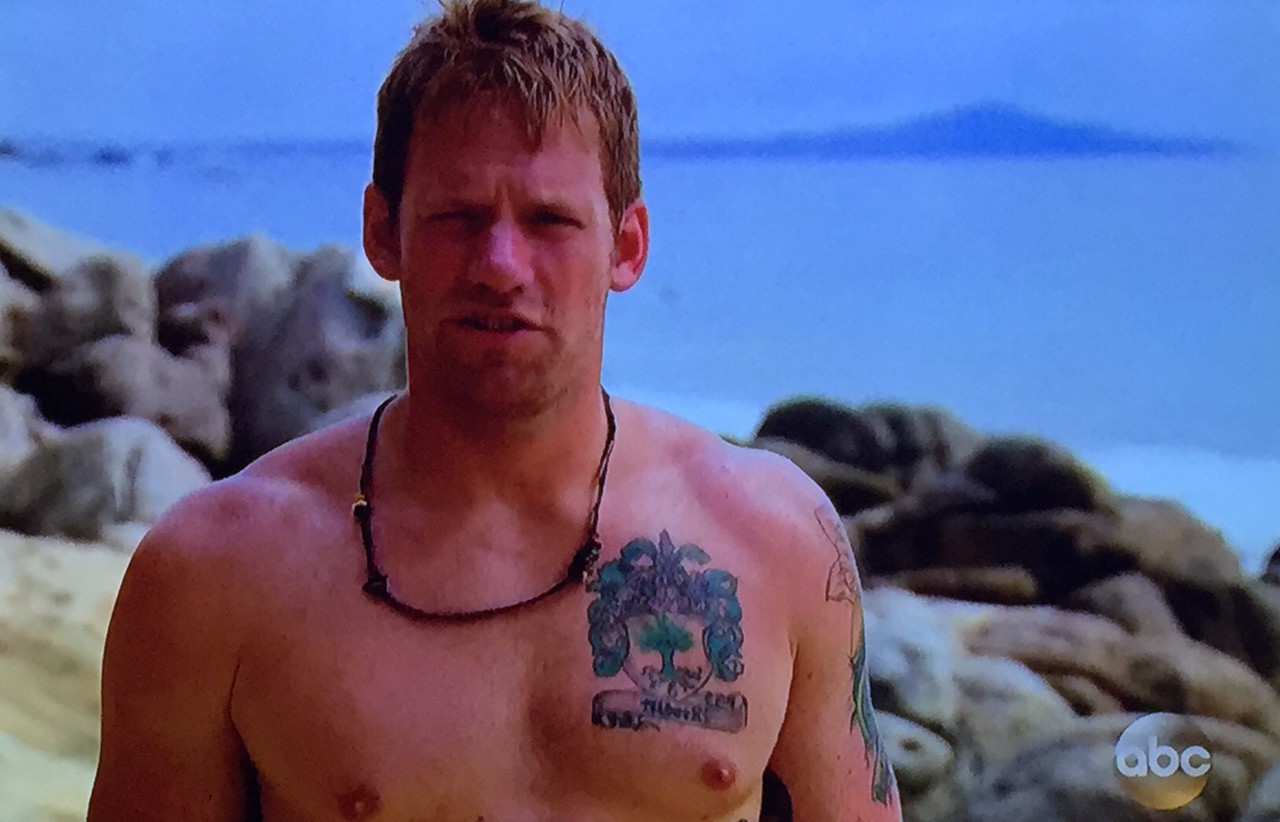 Ah, Joshua’s chest piece. The legendary crest of his family of simple, agrarian hobbit folk. Will life be the same when he returns to the Shire? 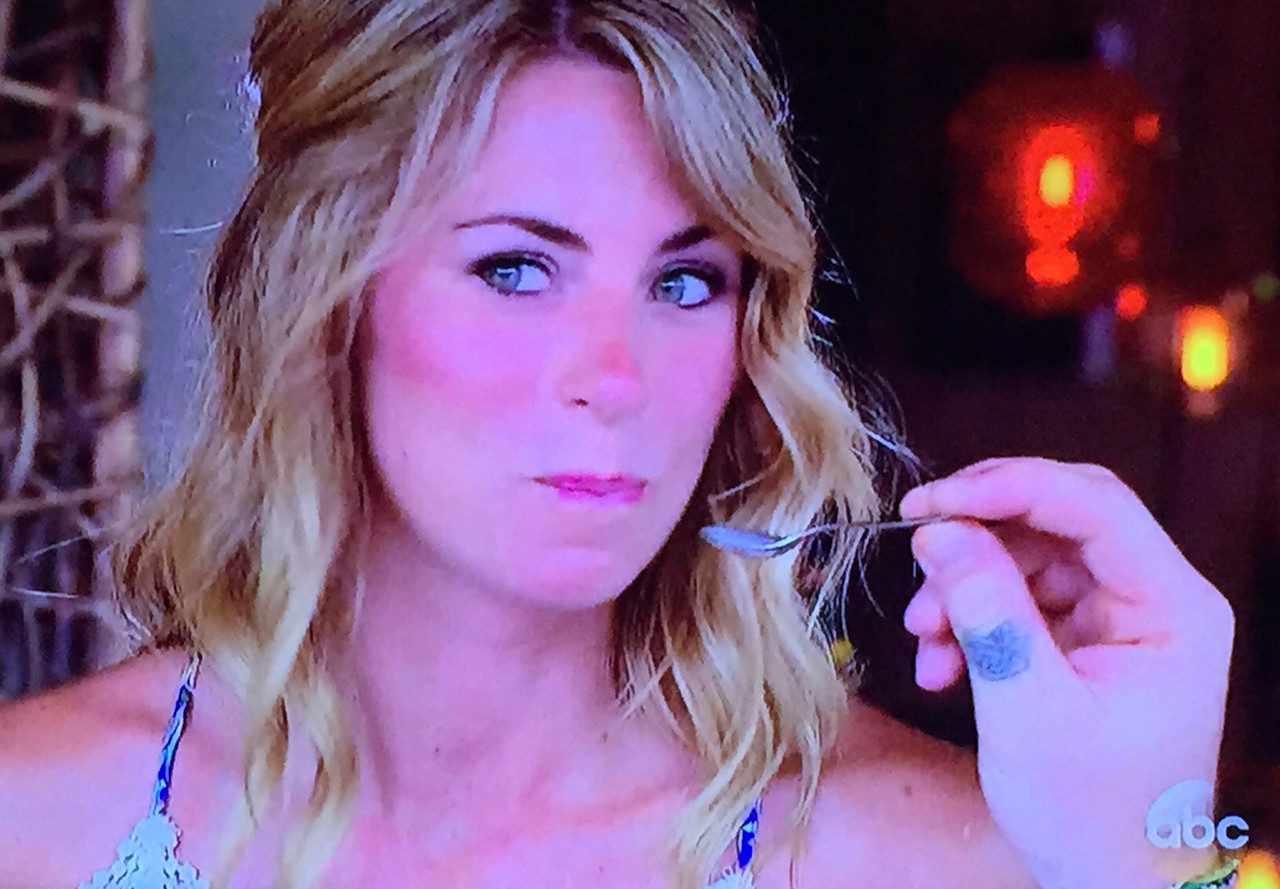 Let’s not forget Joshua’s classic tattoo of a cat’s recently coughed up, moist hairball on his thumb. I’d question his decision to get this one, but if you’re all hopped up on party drugs and roaming the streets of Las Vegas with your boys, all bets are off.

Kudos to Tenley not only for ignoring Josh’s awful taste in body art, but also for her ability to overlook his Urkel costume at the last rose ceremony. 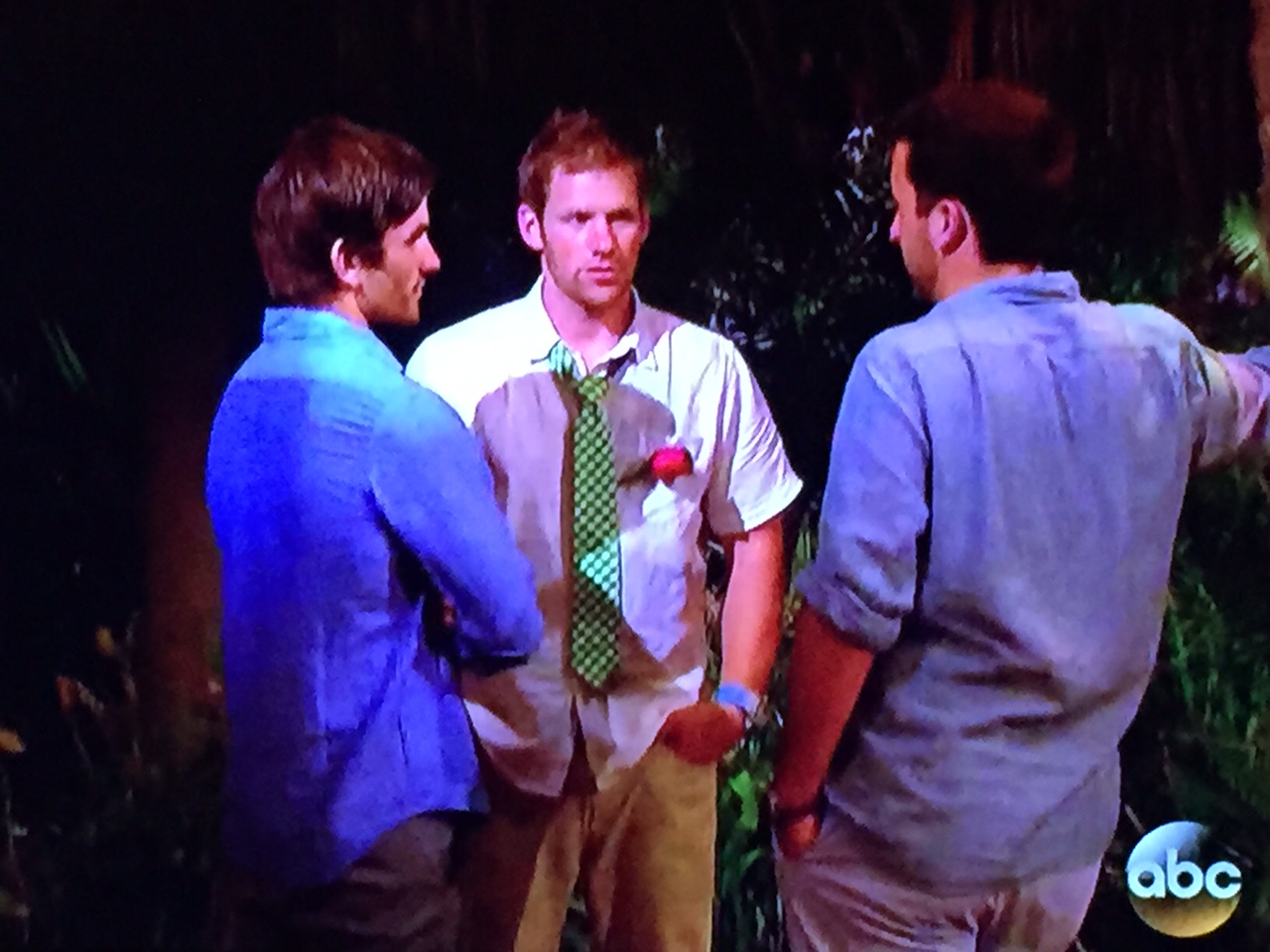 Joshua, I’m sorry no one told you that your outfit made you look like the Joker joined Fall Out Boy. On the bright side, at least it covered up your tats.