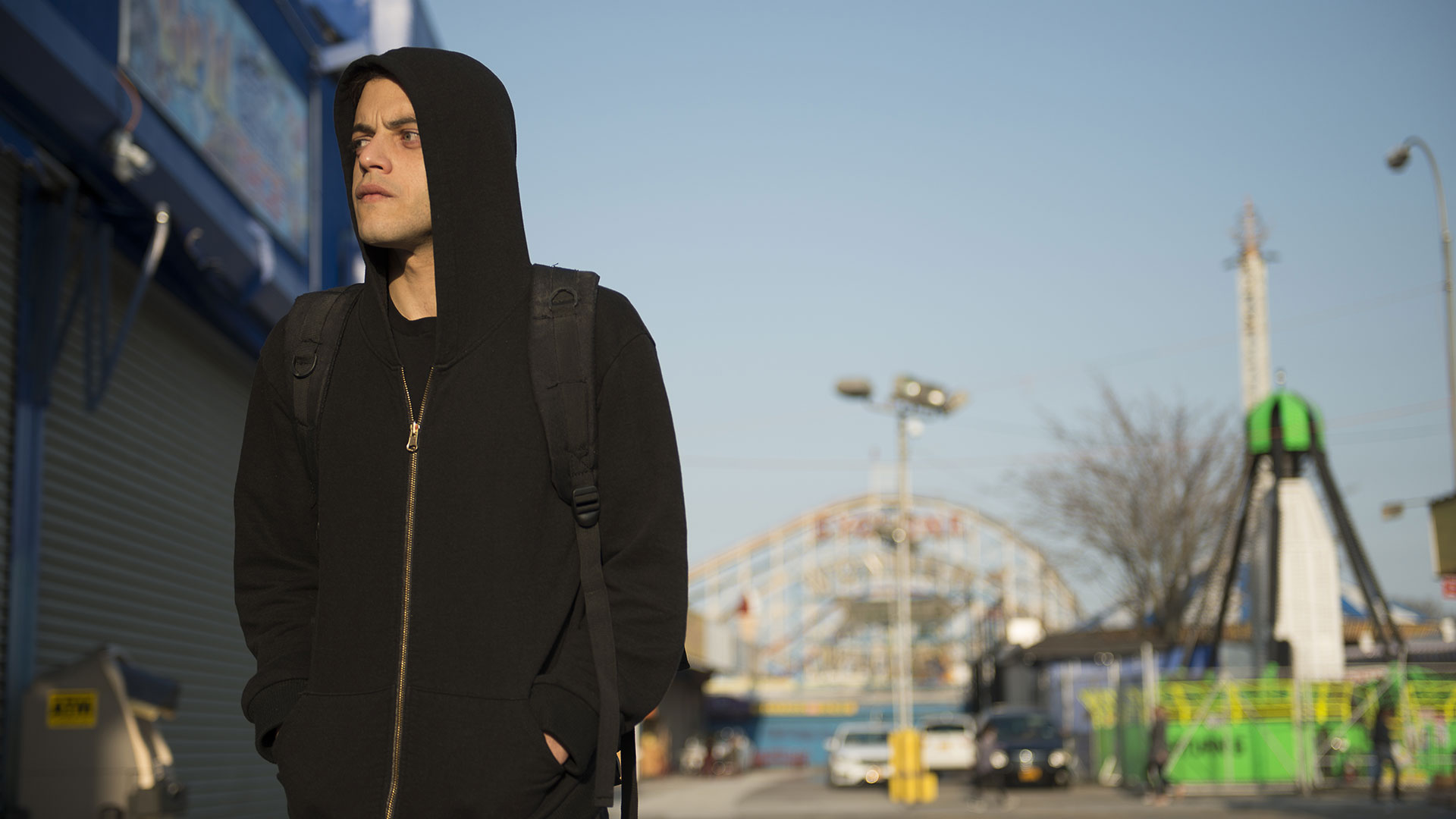 Two weeks ago, I hadn’t really paused to think about how idiotic all my passwords are. If you asked me about honeypots or raspberry pi(e)s I’d assume you were talking Winnie the Pooh or sickly-sweet deserts. The closest I’d come to experiencing true paranoia about consumerism and brands was the hell of submitting to a baby shower registry. (Seriously, though: Big Baby is no joke.) And then I started binge-watching Mr. Robot.

If you’re reading this, I don’t have to explain to you what Mr. Robot is — the sensibly delayed finale airs tonight, people, set your DVRs! — which is a good thing. (If you don’t know what Mr. Robot is, a blanket spoiler alert from here on out, and what’s wrong with you?) There’s no good way to describe it to a civilian without their smiles freezing and their heads bobbing up and down politely:

You realize that you’re beginning to sound insane — and that’s before you’ve even scratched the surface about alternate realities and unreliable narrators and projections of figments of imaginations. And morphine, sweet sweet morphine.

There are certain shows and movies that make me run to Reddit, that compel me to seek out comment sections on random blogs; sometimes strictly to make fun of things (Fear the Walking Dead) or just to find earnest communities chatting about little-seen shows that aren’t exactly discussed en masse live on Twitter (Rectify). With Mr. Robot, though, I do it for a few reasons: For one thing, I often have no idea what’s going on; for another, I always know there’s so much I’m missing. (Those known and unknown unknowns, you know?) More broadly, I’m just generally a connoisseur of weird online niches and the obsessive discussion within, and Mr. Robot Internet more than scratches that itch.

For example, in the past few days I have squinted at my screen and nodded profoundly while reading, among other things:

And these are just the mildly trippy fun facts! The true Ayahuasca-level stuff is all the speculation about who is real and who is imagined and who is someone’s mom; about which hacks will succeed and which will be sabotaged and by whom; about whose greasy popcorn fingers will pull the trigger and what will spark Elliot’s increasingly unstable visions. (Oh, and who the hell keeps eating all the donuts?!)

Here are just a few topics that have prompted conspiracy theories and guesstimates from various corners of the Internet and driven me nutso in the process:

I hope so, if only because Sam Esmail identified the 2008 financial collapse as one of his three motivations for writing the show, and that would certainly be one way to pay homage to and/or leapfrog the chaos of those days. (I’d love to see some jailbroken criminals taking advantage of the civil unrest, if only to serve as a reminder that all those people were supposedly sprung from the clink not too long ago.)

The other two motivations, according to a Reddit AMA Esmail did and some subsequent interviews: his frustration with the way Hollywood had previously depicted hacker culture, and his “personal experience with the Arab Spring, specifically in Egypt.” Might we see Elliot skulking around on foreign soil in Season 2, or will the revolution be domestic?

What’s the deal with Tyrell?

Is he fully imagined by Elliot, a la Mr. Robot? (There are a number of similarities between the two.) Or has he been hacking and manipulating Elliot all this time? Is he real, or just an Elliot projection of the sort of snakey operator who would desire to be the CTO of Evil? Is Dan Fierman on to something with his theory that Tyrell is (A) a Blade Runner replicant here to kill his creator and (B) gonna get got regardless?1 Does it mean anything that his first name refers to the Scandinavian god of battle, Tyr? (Why do all “name meaning” websites make me feel like I’m being hacked? They’re worse than lyrics databases.) Finally, in what universe would the police not immediately figure out that he strangled Snooty Toilet Lady?

They should turn her into a thinly-veiled Marissa Mayer type.

Who is the “weird dad” who moved into the Aldersons’s old house?

Did Joanna give birth to Darlene via Mr. Robot and then age really, really gracefully?

This theory is my favorite. Age is just a number. I hear lashings are great for the skin.

Is Gideon a goner?

The last time a Mr. Robot character was built up as this much of a Goodhearted Soul, she wound up in the back of a thug’s trunk. Gideon simultaneously knows too much and not enough: a worrisome combo. May he survive to live a long life of awkwardly perched breakfasts-on-bed.

Will the finale feature dog poop?

What’s the latest with Flipper and that lil SIM card he lapped up off the grimy floor? Is that tiny wealth of information sitting within a steaming pile on a Chinatown sidewalk, just waiting to attach itself to the bottom of someone’s shoe? I’m super partial to the idea that, thanks to an unrelated microchip implanted into Flipper, Krista and Michael Hansen will somehow find cause to reunite and try to turn in Elliot, because there’s no question that Elliot would outsmart them both, even in his addled state. Also, I’m sad he’s been too preoccupied to bother hacking the vet.

What do you think Ollie is doin’ right now?!

Probably juuust about to step in dog poop, right?

'Bachelor in Paradise': Samantha Turns on Joe and Ashley I. Books a Night in the Fantasy Suite