‘Bachelor in Paradise’: The Epic Season Finale That Will Change Everything (or Nothing) 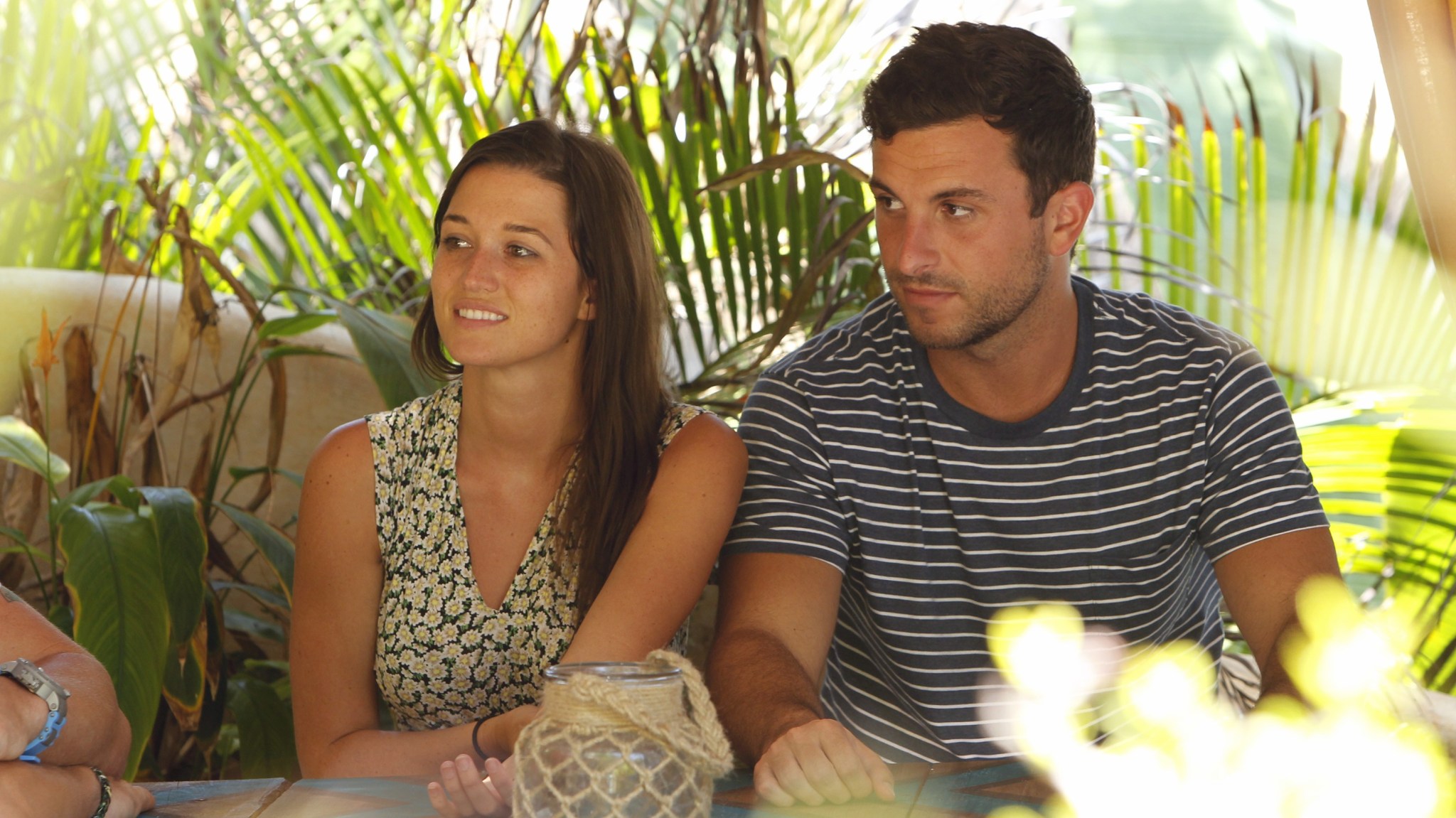 Toward the end of last night’s final episode of Season 2 of Bachelor in Paradise, Chris Harrison declared “there is nothing worse than an empty promise.” Um, might I be so bold as to disagree? How about tinnitus? Try living with that for a week and tell me how it compares to someone canceling their brunch plans with you at the last minute.

Actually, an incessant ringing in my ears isn’t all that different from the experience of listening to Carly professing her love for Kirk, the human slice of day-old pound cake. Kirk was spooked by Chris’s warning to take their made-for-TV vows of blessed monogamy seriously and hastily dumped Carly so hard her eyebrows almost fell off. Their separation was kind of authentically tragic. She spent the entire season snogging with this ginger-haired weenie, only to watch in horror as he stammered through a shambolic explanation for leaving with one day left before their completely nonbinding, televised commitment ceremony.

That’s right, the final rose is not a legal union of any sort, but that didn’t stop Kirk and Tenley from torpedoing their respective relationships before the credits rolled. Tenley was worried that a long-distance relationship with Joshua wasn’t going to work and cast him aside. Kirk was scared that Carly wanted to have kids, buy a house, stop doing Yoga Booty Ballet every day, and explode out of her hot pants (I inferred that last part) — typical guy behavior.

Both couples could have easily stayed together through the final rose and broken up off camera. It happens all the time on this show. In fact, it happened with Cassandra and Justin. After meeting a couple of episodes ago, they professed to be in love, but skipped the fantasy suite because Cassandra thought it was “inappropriate.”

Still, they exchanged roses and gave us what appeared to be a happy ending until Cassandra showed up on After Paradise with Jonathan, who she is now dating. Cassandra and Justin broke up because (wait for it) it’s too hard to do a long-distance relationship. They broke their promise, which I’ve been told is the worst thing in the world. You know, aside from old-school transgressions like murder, slavery, torture, and America’s Got Talent. So why was Chris so happy to see Cassandra and Jonathan living in reality TV sin last night? Could it be that Bachelor in Paradise is the most poorly defined game show in the history of the medium?

Is this a competition like Survivor? Is it a social experiment to see how love can survive constant temptation and free alcohol? Is it a subversive, nihilistic reminder that all romantic commitments are meaningless constructs of human frailty and fear of dying alone? At least on Bachelor Pad, there was a prize. It was $250,000, which Jaclyn reminded us of as Nasty Nick playacted his penance for depriving her of the Porsche Cayenne Turbo S she was going to buy with all that money from Bachelor Pad 3. On Bachelor in Paradise, the prize is allegedly love, but that isn’t even guaranteed. Plus, you can get to the end of the show and barely know each other like Sam and Nick or Cassandra and Justin.

In an attempt to make us all forget how completely, utterly pointless the last six weeks were, we were gifted Tanner and Jade’s engagement. Their nonbinding TV wedding ceremony is sure to take place in the first episode of Paradise next summer, which gives us a full year to speculate whether they can make it that long without splitting up. I actually hope they can stay together. Like Chris, I believe that everyone deserves love. But what I also believe is that every game show should have rules — real, binding rules. And prizes.

I’m supposed to feel bad for Mikey T. when Mackenzie rejects his rose, but I don’t because they barely shared any screen time together and there’s nothing at stake. Maybe I’m supposed to be happy about Mikey getting rejected since he dumped poor, pathetic, unloved Juelia. But based on the logic of this show, he did the right thing by leaving her before he had to make an empty promise.

Human existence is predicated on making empty promises. If I don’t “promise” myself I’m going to start going to the gym or take up Yoga Booty Ballet, then I’ll be forced to accept the fact that I’ll never get in shape and will be 300 pounds by the time I’m 50. At least by lying to myself I have something resembling actual hope for the future. I can “promise” my family I’ll visit them more often (or at least call once in a while) so they’ll quit pestering me all the time. It makes them feel better, even if it’s a whole lot of bunk spewed solely for their benefit. There are actually plenty of things that are worse than an empty promise, like a boring TV show.

The idea for Bachelor in Paradise is great: put a bunch of old cast members in a resort, get them drunk, and encourage them to hook up. In an ideal world, it would be a dark mirror of the classic Bachelor formula. Instead of a show that obsesses over the primacy of order and monogamy, it would revel in chaos. Part of the illicit thrill of basic cable trashfests like Vanderpump Rules and Below Deck comes from watching people making horrible decisions while drunk, then getting in fistfights over said decisions. Bachelor in Paradise so badly wants to be that, but can’t. It’s surprisingly chaste, and now that it’s over, it’s clear that it’s totally rudderless. Chris’s pre-final-rose speeches all seemed to be looped over an endless montage of blank reaction shots, like they had to figure out how to end this thing in post because whatever format they had concocted just didn’t work.

In real life, the only prize is love, because we’ve been told since birth that material things don’t actually make you happy. So, in the fake fantasy life of Bachelor in Paradise, the prize should be something tangible. Maybe a washer/dryer set? A set of steak knives? A Porsche Cayenne Turbo S? Free tattoo removal service? I guess my prize is this season of Bachelor in Purgatory being over, and isn’t that the greatest prize of them all?

Best Breakups of the Year

5. Joe and Samantha, Part I: This would be higher on my list if it weren’t for the superior sequel, kinda like Batman Begins compared to The Dark Knight. Yes, Joe and Sam, Part II is the Dark Knight of Bachelor breakups; it’s the Godfather: Part II, the Terminator 2: Judgment Day, the Star Trek II: The Wrath of Khan, the Bill & Ted’s Bogus Journey of reality TV dumpings.

4. Ashley I. and Jared: We all derive so much pleasure from watching Ashley I. cry. What’s the matter with this country? I mean, I am laughing right now just picturing her puffy, wet face. Perhaps it’s not that I find her pain amusing, but more that I find her pain entirely misplaced. From what we have seen of Jared on Paradise, he’s a fairly generic dude with a very large jaw, a basic inability to grow a full beard, and a general vibe that screams “I still have a CD wallet in my car.” That’s who you’re crying about? He doesn’t seem like a bad guy, but there are 50 guys just like him doing laps at the bar at Shutters right now.

Based on her post-dumping statements, Ashley I. might never fall in love again. “It’s like I had the perfect guy and it didn’t work.” “I just want him to like, like me.” “It’s just like he’s the best guy I’ve ever met.” “It could have been the ultimate fairy tale.”

3. Kirk and Carly: I was bored out of my mind watching this couple all season, so part of me was thrilled to see them implode. But, I’m not some heartless monster (this monster has a heart!) so I certainly felt a bit of empathy for Carly. She let herself be vulnerable, got all the way to the end of the process, and then found herself on the receiving end of a sucker punch from her boyfriend. This breakup was so bad that it made everyone else on the show cry too. Bonus points for Kirk’s line of the night to Carly: “Please don’t throw up.”

2. Lauren I. and Reality TV: What a perfect match these two were. On one side you have Lauren I. — vain, selfish, prone to irrational mood swings, and honest to a fault. On the other side, there’s reality TV — a hulking beast with an insatiable hunger for loudmouthed maniacs to drool, cuss, and vomit up bile for America’s amusement. Has there ever been a more ideal couple in the history of the Bachelor franchise? As Lauren stumbled down the beach whilst muttering to herself, I couldn’t help but feel that if she’d just been willing to put in the time and effort, this relationship would still be going strong today.

1. Joe and Samantha, Part II: Her rationale wasn’t all that different from their first separation: hatred of drama, etc. The difference here was that she did it at the rose ceremony and humiliated him in front of the entire cast. It was all the little things you loved about the first one, but on a grander scale. In other words, it was the ideal sequel. Even more satisfying was watching Sam end up with Nasty Nick, the very guy she rejected in favor of Joe only a couple of episodes prior.

The Final Tattoo Watch of 2015 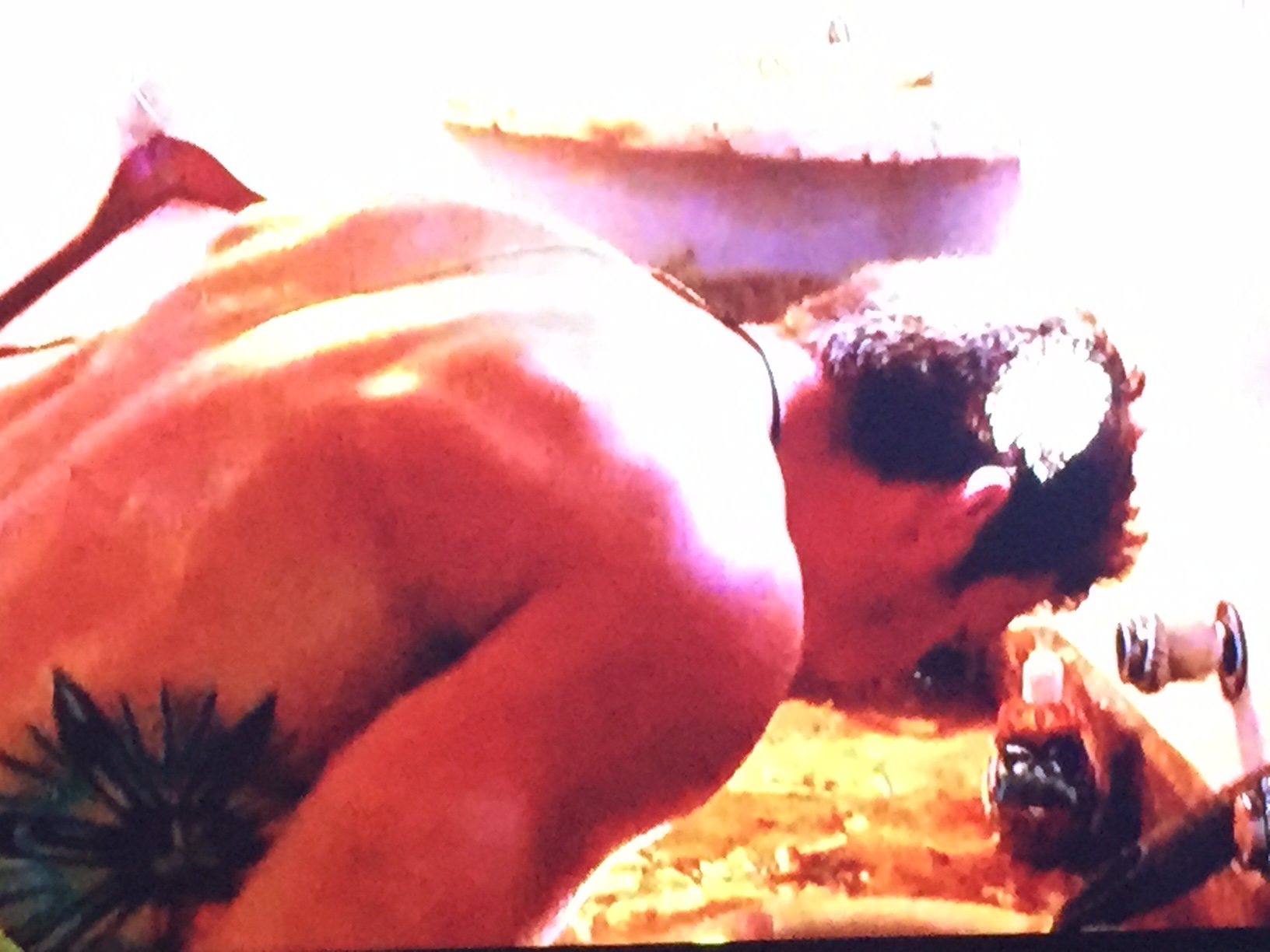 So remember the star-gate sequence at the end of 2001 in which Dave goes through that weird light show, then ends up in a bedroom, then turns into a giant space baby? The implication is that Dave evolves into something magnificent and new that we can’t hope to understand with our puny human brains.

That’s basically how I felt seeing whatever the hell that thing is on Joshua. It’s either a graphical representation of the big bang that created our universe or Kal-El’s Kryptonian shuttle from Superman. Or it could just be an ugly mess of horseshit that means nothing. All I know is that I’m probably too feebleminded to understand it. This tattoo is the Alpha and the Omega. There can never be another.

We Watched That (So You Didn’t Have To): John Cusack and Jackie Chan’s VOD Historical Action Epic, ‘Dragon Blade’