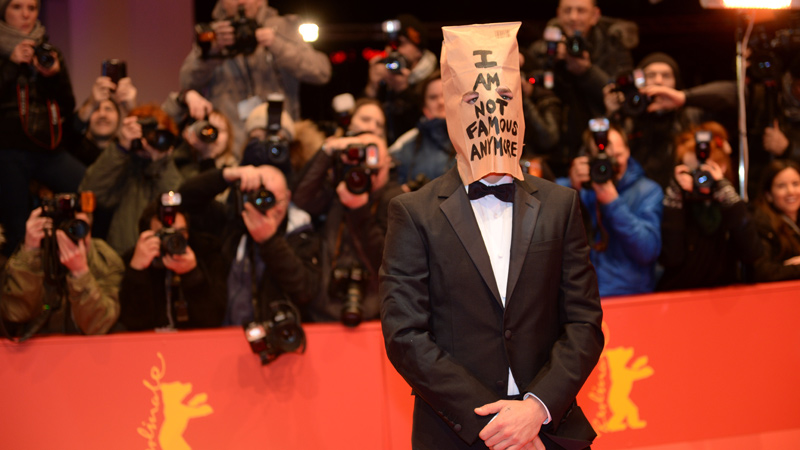 In a stunningly brief amount of time, the world has borne witness to Shia LaBeouf’s creative evolution from petty intellectual property thief to impassioned sky-tweeter to balls-out, self-negating performance artist. On Sunday, LaBeouf took the next precious steps of his artistic journey by “storming out” of a Berlin press conference for his film Nymphomaniac after quoting a French football player (tres continental!) and later appearing on the red carpet in a paper bag bearing his wildly popular I AM NOT FAMOUS ANYMORE catchphrase.

We know what you’re thinking: OH MY GOD I’M SO BORED OF THIS SUPER-GENIUS A-HOLE PLEASE MAKE IT STOP. But you’re also thinking: Isn’t a paper bag kind of hacky? Couldn’t an artist of LaBeouf’s caliber find a more potent expression of his vision than appropriating (he loves to appropriate, it’s kind of his thing) the (admittedly timeless) shtick of the Unknown Comic? You’re right: He can do better. We can do better, as a society supporting our most vital voices. And so let’s offer him a hand in workshopping some alternate looks for when he returns home to the States and has another red carpet to walk. 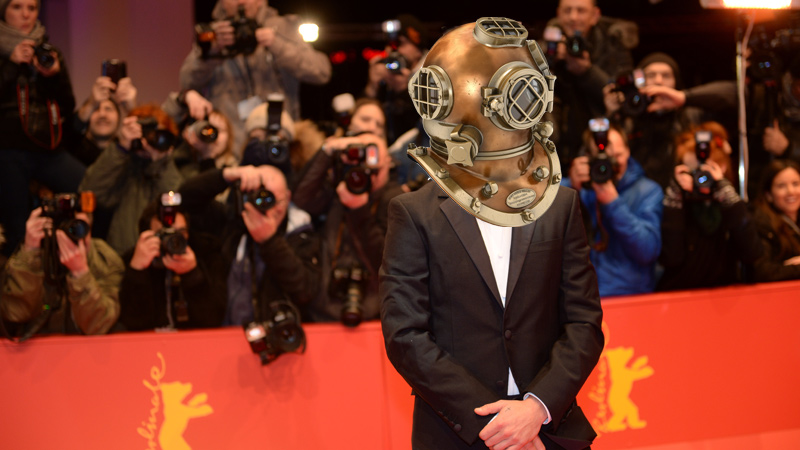 It’s perfect: Without the life-giving oxygen inside the diving helmet (fame), the diver drowns (death). Unfortunately, its claustrophobic bubble suffocates even as it nourishes. You can stare at it, thinking you know what’s inside, but it’s impenetrable to the camera’s gaze; go ahead and try — the angry burst of your flash will reflect back nothing but your own blinding ignorance. And there are some really cool fish deep underwater who aren’t all judgey and shit; everyone just bioluminesences together without all the drama.

A Viking Helmet Over the Paper Bag 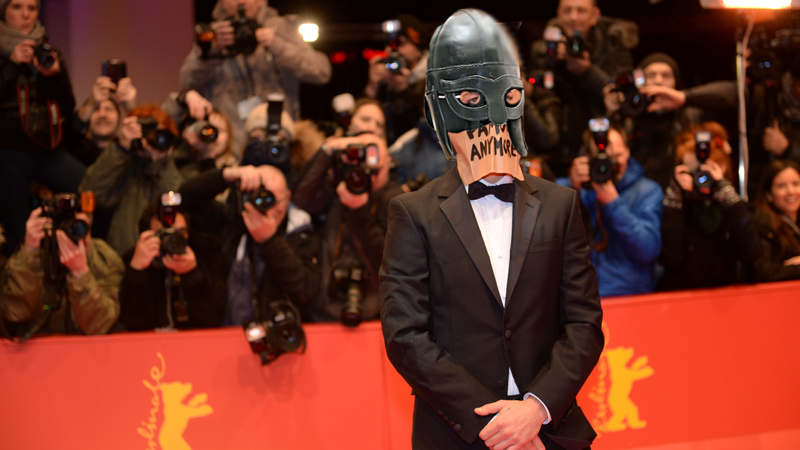 Another helmet? OK, but: Fukkin’ Vikings, man! Shia is a conquerer. Shia is misunderstood (because of a bunch of unsavory things he actually did). Shia leaves destruction in his wake. Shia wants to ride a flaming boat into the afterlife, where he will sow next-level mischief with Loki. Shia loves a good hat. 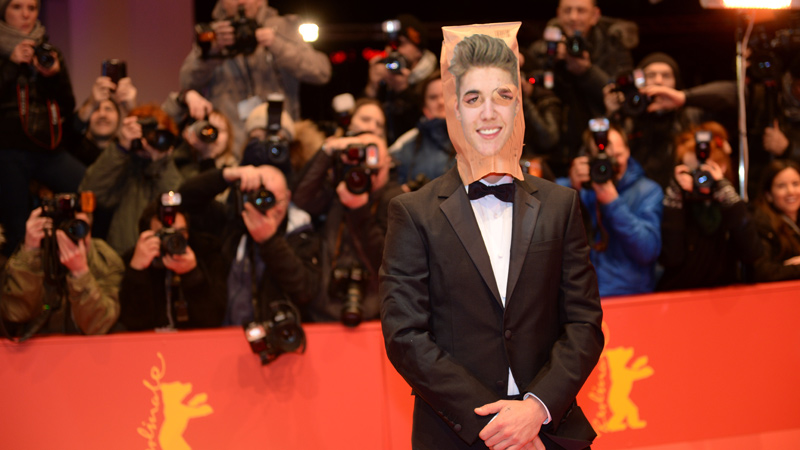 Is there a more profound statement to be made about the curdled state of modern fame than wearing a paper bag emblazoned with Justin Bieber’s mug shot? Sure, maybe. But a photo of another lost young man smirking at the unrelenting absurdity of his life is worth a thousand words, which is many more words than the number of words in I AM NOT FAMOUS ANYMORE, which contains around seven words. And if you cut the eyeholes slightly askew from where Bieber’s eyes should go, everyone will be too vaguely unsettled by the visual dissonance to think deeply about the message you’re sending. Which, truth be told, needs some more incubating. Bieberfacing it is at least a start. 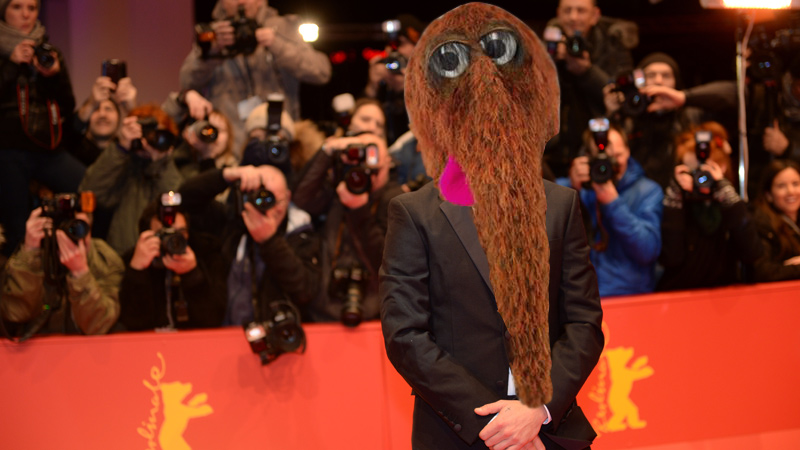 Like Mr. Snuffleupagus, Shia would like to be visible only to children and to special friends. (Such as Steven Spielberg and Lars von Trier, who helped communicate his true essence through film, and who also further indulged the fantasy by wearing Big Bird costumes on shooting days requiring extreme emotional vulnerability.) Under the protection of a Snuffleupagus head, perhaps Shia could finally feel safe in the magical belief that nobody in the red carpet gallery can see him. He’s not only NOT FAMOUS ANYMORE, he may not even be real.

An Even Bigger Paper Bag 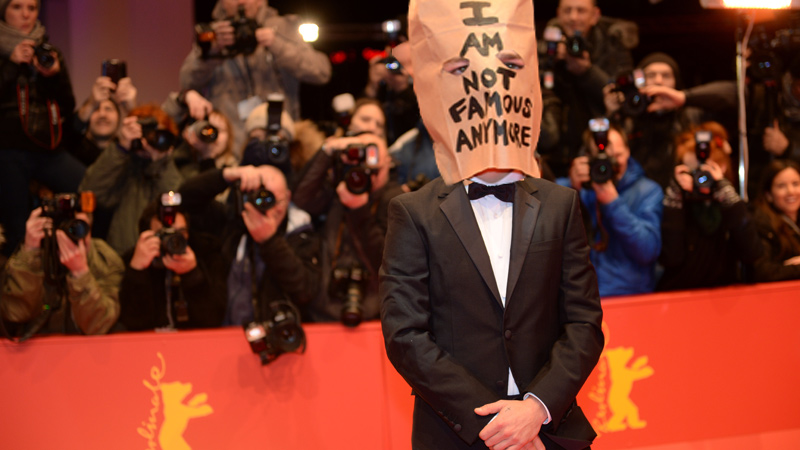 Go bigger-paper-bag or go smaller-paper-bag home. See you in America, Shia. We like it bigger here. Stop being so subtle all the time.

Katy Perry and Lady Gaga: The Battle for the Pop Silver Medal Rages On

'The Walking Dead' Recap: Carl's So-Called Zombie Life in 'After'