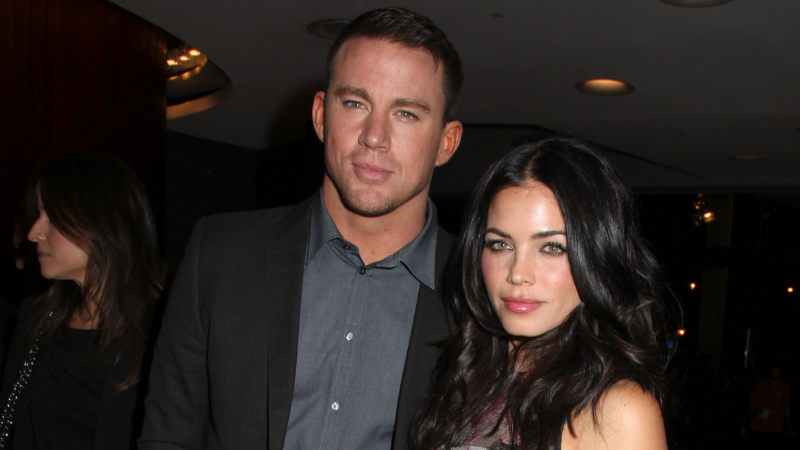 You probably know this, but at some point, Channing Tatum became one of Hollywood’s most bankable stars. The New York Times reminds us that in 2012, he starred in three movies that each grossed more than $100 million. Now prepare yourself for another round of the Tatum onslaught! He’s got two big movies coming up (the animated The Book of Life this month, Foxcatcher in November), for which he has already hit the publicity circuit, and he’s filming Magic Mike XXL. The confluence of Book of Life press and Magic Mike production has brought us a few tidbits about him and his dancer/actress wife, Jenna Dewan, that could fuel a thousand Channing Tatum fanfic Tumblrs. (Reminder: Dewan was Justin Timberlake’s first post-Britney girlfriend. That isn’t mentioned enough.) They met while filming the original Step Up movie (given the strength of the franchise overall, the original doesn’t get enough attention anymore — what a great film!), and apparently that movie has set the tone for their domestic life.

He told Redbook that the Tatums wake up, put on music, and start dancing. “Dance battles do sort of happen, to be honest,” he says. “When we wake up in the morning we put on music, and while Everly’s eating we dance and it just starts to get stupid.” It’s as if they are living the never-made sequel to the first Step Up that was rejected in favor of introducing a new cast. Now that we know this is real, let’s get a Kickstarter going to produce a movie about grown-up Tyler Gage and Nora Clark. The dance scenes are already writing themselves: In a separate interview, he told People his wife approves all the Magic Mike stripper choreography. Breakfast at the Tatum household must get pretty sexy!

Beef of the Week: Iggy Azalea vs. Snoop Dogg

Fortunately (or is it unfortunately?), this beef has already come and gone. But the facts remain the same: Snoop fired the first shot, Iggy responded, Snoop fired again, Swaggy P defended his girl, Snoop apologized. Like all modern quarrels, this one began on Instagram. (Side note: Dear God, Snoop posts on Instagram way too much.) He shared a photo implying that, without makeup, Iggy looks like an albino.

That is cold. Snoop is a 42-year-old man insulting a 24-year-old woman on social media. She replied like a true Millennial by addressing it in a series of now-deleted tweets. But Snoop would not be scared off. He replied with several more mean photos (exhibits A, B, and C). Perhaps he was just showing Marlon Wayans a little love? What’s Marlon up to these days? Anyway, then Nick “Swaggy P” Young got involved.

Ain't nobody worried about no SnoopLion .. This dude Just goin thru a midlife Crisis you Go get convertible yet . OG's out here losin

Who looks the worst so far? I’m going with Snoop. A grown man is using Instagram to make fun of a rapper he presumably doesn’t respect. Snoop is too influenced by The Youth these days. Obviously, he should have released a dis track instead of relying on the internet. Play to your strengths!

Perhaps realizing he was losing the war, Snoop ultimately ended this fight by releasing yet another Instagram. This time it was a video in which he explained that he’d apologized to Iggy’s mentor, T.I. I think an apology to Iggy would have been more sincere, but let’s just close this idiotic chapter in our nation’s history.

I wanted to like Robin Thicke. The Evolution of Robin Thicke is a great album, which many cool music people acknowledge. Even Paula has some jams, although said cool music people won’t admit it. Sure, it’s something of a stalker’s treatise, but “Still Madly Crazy” is a lovely song. Then, however, Thicke does things like going on Howard Stern and detailing the threesomes that precipitated his divorce, or throwing parties to celebrate the dissolution of his marriage. He was at least a temporary member of Leonardo DiCaprio’s posse, cavorting with a “harem of models.” The real twist here is that, apparently, Tom Hardy is part of Leo’s crew, too. That’s a bigger opportunity than playing Bane in The Dark Knight Rises. I wondered what Thicke and Hardy talked about, and what accent Hardy used, but then I remembered the harem of models. They may not have spoken to each other at all.

Titillating Couple of the Week: Shia LaBeouf and Kate Mara

Shia LaBeouf and Kate Mara were spotted looking cuddly at Disneyland this week. Could it be that she’s dating America’s most charming asshole? And is that a good move or bad move for her? She is as close as an American can come to being royal. One side of her family owns the New York Giants, the other side owns the Pittsburgh Steelers, and she carries herself with an undeniable air of nobility. She’s coming off a long-term relationship with fellow celebuspawn Max Minghella. Of course, despite his lesser pedigree, Shia is higher-profile and more interesting, but maybe a more obvious choice for Rooney Mara, the edgier of the Mara sisters. Maybe this is what Kate needs, though: to spice up and complicate her own image.

Unfortunately, this is all conjecture, because apparently they are not dating. He’s still seeing a model, and he and Kate just have a movie coming up together. Chalk it up to research, which is significantly less fun.

Divorce of the Week: Matt Barnes and Gloria Govan

The Los Angeles Clippers’ Matt Barnes separated from his Basketball Wives: LA–star spouse, Gloria Govan, this week. TMZ says they have trust issues, and they’ve been broken up for six weeks at least. If you’re not heartbroken by this news, you are probably not aware that they have freaking adorable twin sons. I hope they’re not suffering in this difficult time.

Could it be that Gloria had some kind of illicit relationship with recently affianced Bow Wow? Bossip hasn’t ruled that out.

Clooney News of the Week: A Manor Befitting a King, Amal’s Name Change

Just because George Clooney and Amal Alamuddin are married, that doesn’t mean the details have stopped pouring in. To begin with, Curbed reports that they purchased a 9,000-square-foot manor that sits on an island in the River Thames. It was previously owned by a banker who gave the interior a modern makeover. So it looks like an old, stereotypical English manor from the outside, but has parquet floors inside. The estate cost $12 million, and it comes with 14 CCTV cameras and a boathouse.

Meanwhile, Amal flew to Greece this week to consult with the government there about how it could reclaim the Parthenon Marbles from the British Museum. Two hundred years ago, British diplomat Lord Elgin stole friezes that were part of the Parthenon, and it has been a controversy ever since. It is somewhat bizarre that the British Museum displays pillaged artifacts so prominently. But fans of Amal are less concerned with this centuries-old art crime than they are with something more personal: how she changed her last name to Clooney. The proof is on her law firm’s website. Page Six doesn’t cite any specific fans who are upset or dismayed by the name change, which is just one suspicious aspect of this story. There’s also this quote: “Her bio picture is a glamour shot, with the beautiful barrister’s hands folded daintily beneath her chin.” This sounds far more Daily Mail Online than Page Six. The tabloid’s snarky tone seems to have been thrown out with Amal’s maiden name.

The Top 10 Movie Troops of All Time: A Definitive, Armed Forces–Informed Ranking