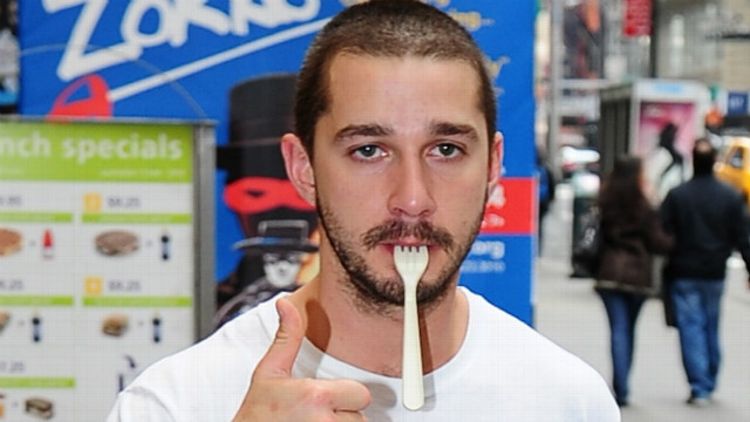 The last time Shia LaBeouf ripped someone off, it was in a chain of leaked emails between himself, Alec Baldwin, and Daniel Sullivan after LaBeouf left Orphans. His uncited source material was an Esquire essay titled “How to Be a Man” by Tom Chiarella, who responded graciously by writing that “in a lot of ways, that’s just fine by me — to have informed the (apparently emergent) manhood of a young guy, caught in a spat with an old guy who intimidates even me. I’m glad the words worked.”

It was a get-out-of-jail-free card, though email plagiarism isn’t really a major event even when it’s leaked by the sender; less than a year later, though, LaBeouf has done it again, and this time it’s kind of a big deal. On Monday, LaBeouf posted a short film he had written (well — more on that in a second) and directed, HowardCantour.com, on its official namesake website. At its Cannes premiere in 2012, LaBeouf was described as “seem[ing] nervous about the potential reception” of the film, which stars Jim Gaffigan as an online movie critic (alongside Portia Doubleday and Thomas Lennon). Perhaps that’s because, we now know, he lifted chunks of script and plot from cartoonist and screenwriter Daniel Clowes (Ghost World, Art School Confidential). Clowes wrote the comic “Justin M. Damiano” in 2007 (for charity, for Pete’s sake!). The film and comic share an opening narration (“A critic is a warrior, and each of us on the battlefield have the means to glorify or demolish (whether a film, a career, or an entire philosophy) by influencing perception in ways that if heartfelt and truthful, can have far-reaching repercussions”), and the short continues to vampire from the comic throughout its 12-minute run. (The film was quickly password protected, but a still-viewable (for now) version exists at BuzzFeed.)

Clowes only caught wind of the short after someone forwarded him the link, and he told BuzzFeed that he “was shocked, to say the least, when I saw that he took the script and even many of the visuals from a very personal story I did six or seven years ago and passed it off as his own work. I actually can’t imagine what was going through his mind.” LaBeouf has tried his hand at creating comics in the past, and was a Clowes fan, though it’s a pretty crappy fan who will fail to put your name anywhere in the credits of his unofficial adaptation. LaBeouf’s script was praised as “incredibly clever,” and he claimed to have drawn inspiration from his own experiences. (“As I tried to empathize with the sort of man who might earn a living taking potshots at me and the people I’ve worked with, a small script developed.”) I would have been nervous presenting this at Cannes, too.

Critics have laid into LaBeouf’s comics, and laid into them good. The strips have been compared to tweets, children’s books, and codes from outer space, all unfavorably. Yet the movie’s pretty good (I don’t know — how can you be objective about it at this point?) and it enjoyed a warm festival reception, which leads you to wonder: Why did he risk being outed as a thief instead of just attempting to collaborate with Clowes, and how did he think he wouldn’t get caught? In an interview with Wired, Eric Reynolds (from Clowes’s publisher Fantagraphics), wonders too. “I presumed that LaBeouf would be smart enough to change everything just enough to make it his own thing and shield himself from any legal liability, even if it didn’t excuse him from being a weasel. […] I’m fairly convinced that LaBeouf at least subconsciously knew what he was doing.” I’d say so, because that opening voice-over is a mouthful to internalize. If LaBeouf had taken a reasonable amount of artistic license, he may never have been caught. Posting it online was just a straight-up Icarus move. It was almost like he was looking for a fight.

The strangest thing was, he (apparently) wasn’t. At 10:30 PT last night, LaBeouf responded to the controversy with a series of tweets.

Im embarrassed that I failed to credit @danielclowes for his original graphic novella Justin M. Damiano, which served as my inspiration

First he claimed that he was only inspired by Clowes, then said he had gotten “lost in the creative process” and had “neglected” to credit him, followed by compliments compliments regrets regrets etc.

A Twitter apology is better than nothing, but as Patton Oswalt pointed out, “shouldn’t [Clowes] have been allowed to decide whether he even wanted his work adapted? And, uh, PAID?” Probably. Definitely. Maybe LaBeouf memorized “How to Be a Man” too well: “A man does not know everything. He doesn’t try. He likes what other men know.”

UPDATE: Thanks to you eagle-eyed commenters who pointed out that even LaBeouf’s apology may have been yoinked (from Yahoo Answers, no less). This is too ridiculous. LaBeouf is a LaBot.